After a frosty morning the day was sunny, calm and perfect for our August park activities. Bartley’s block was the first stop and here we dealt with the emerging Caper Spurge. Very easy to pull out but devilishly hard to see amongst the grasses. The count was over 250 plants removed. Some Bridal Creeper, lily and Horehound was sprayed.

The nest boxes on Stringybark Track were inspected and then we visited the Cryptandra amara site. This lovely shrub is a favourite food for wallabies and kangaroos. Over the last few years the population has been reduced to stunted plants with very little flower. Last year three plants were given sturdy protection and they responded with masses of delicate white bell-shaped flowers. Since this is the only known stand in the park a large exclusion plot is planned to protect part of the site.

Morning tea was enjoyed in the sun before we inspected another eight next boxes.Of the ten boxes inspected seven were homes to gliders and that was very rewarding. It took some time to get around the last boxes as a few eyes were scouring the ground for fungi and orchids. Lunch at the Indigo Goldfields Cemetery at 1.30pm was both welcome and overdue.

During our nest box wander, John’s sharp eye picked up a vegetable caterpillar fungi, Cordyceps hawkesii. These are very interesting fungi. I found the following summary in “Victorian Mushrooms and Toadstools” by well known naturalist Jim Willis, who at the time was on the staff of the National Herbarium of Victoria. It was written in 1963. “The life history of Cordyceps is fascinating indeed. It is believed that spores are swallowed or adhere to the soft moist bodies of insect larvae, germinate and pierce the outer skin by a slender tube. Once inside the body of its victim, the initial fungus thread branches out repeatedly until the insect’s whole body is ramified with fungal hyphae. The tissues are destroyed and the host soon dies as it burrows into the earth. Once the fungus has extracted the food the Cordyceps develops the fruiting body”. We now know that the process Jim described is exactly what takes place. 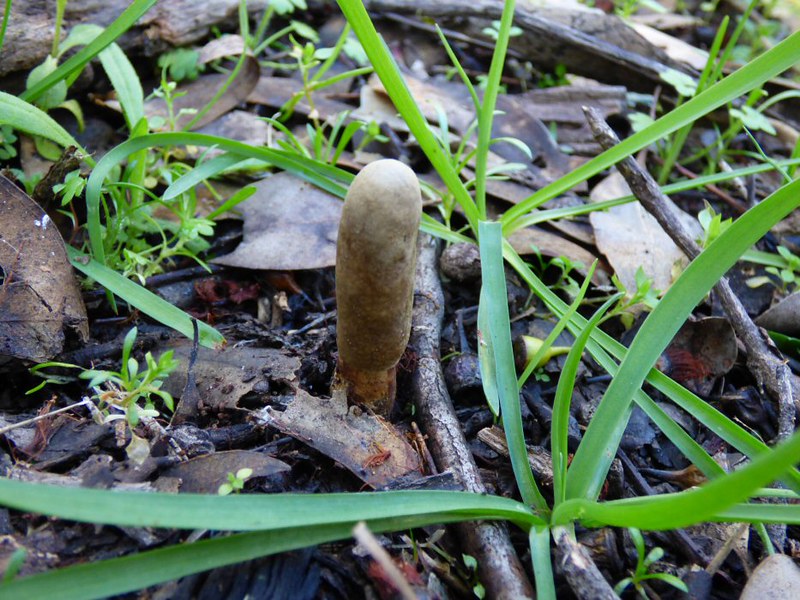 In this specimen the mummified body of a large caterpillar was clearly evident. 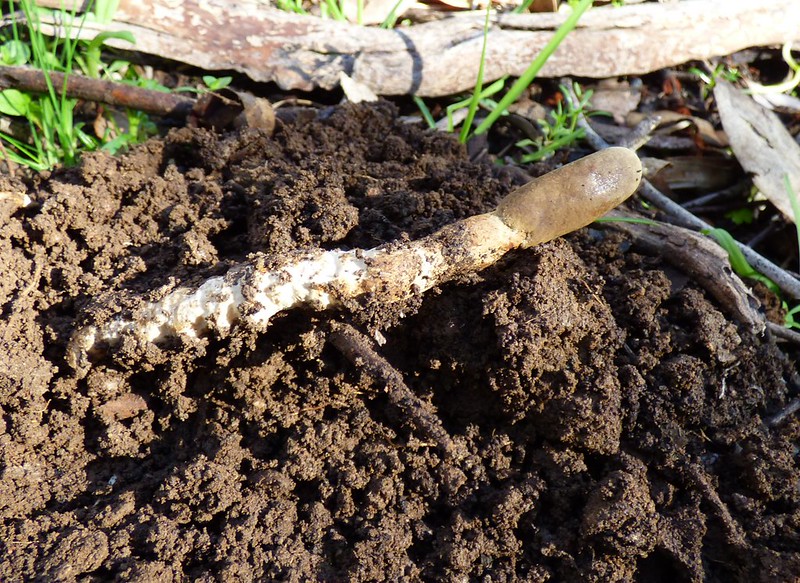 Orchids in flower at present include, two species of Helmet Orchids, Corybas incurvus 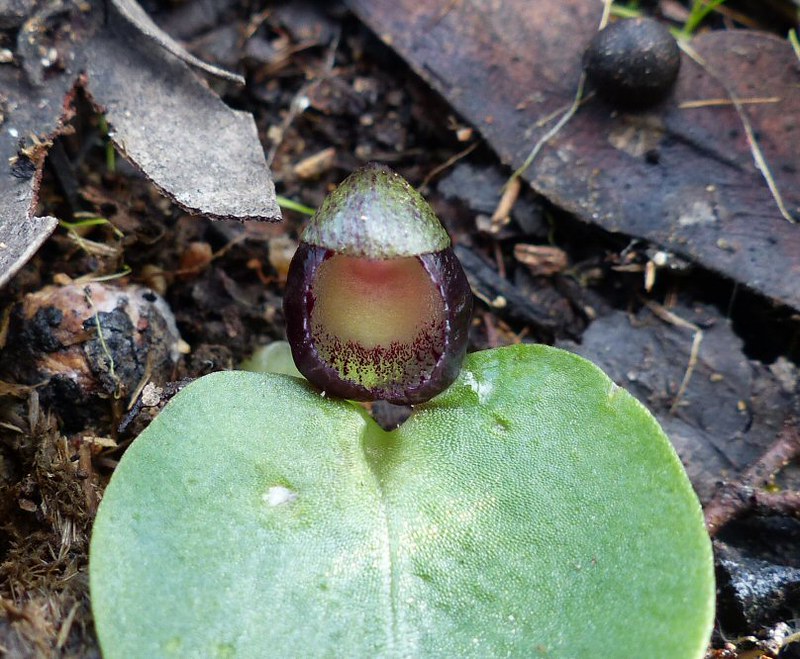 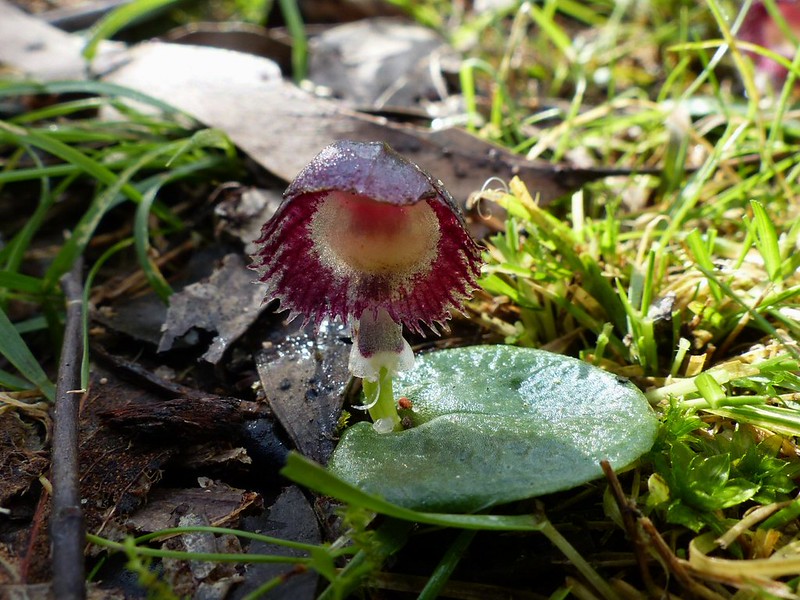 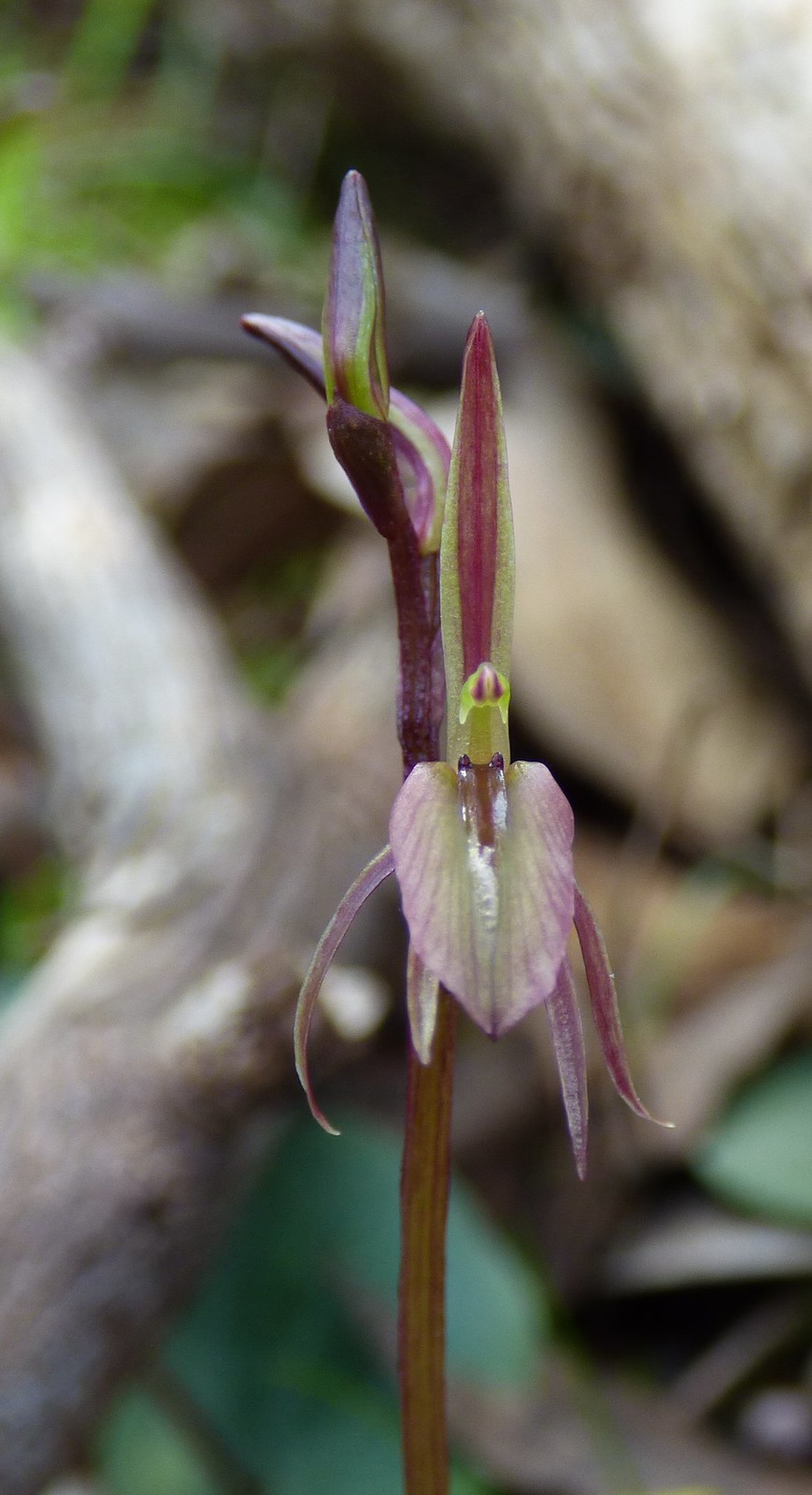 Now is the time to be out and about to enjoy the bounty the good rains have given us. Cyanide Dam is now full thanks to the constant rain. The last big falls fell on saturated ground and the heavy run-off caused the overflow to run once more. 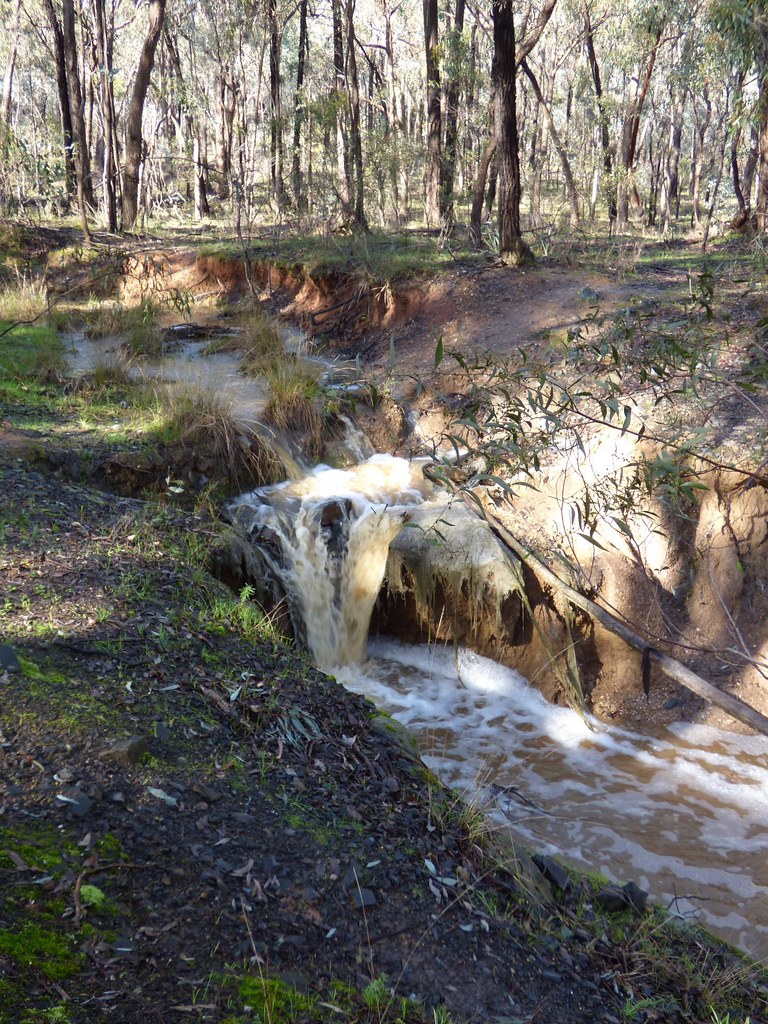 Our guest for the afternoon and evening presentation is Mr Rudie Kuiter. Rudie specialised in fish taxonomy, with an interest in orchids as a hobby. As a taxonomist this interest became something of a more serious nature, which led to him to look at orchid pollinators and this became a full time occupation. Insects were Rudie’s first interest before he came to Australia. Rudie has published two field guides, “A Quick Guide to Victoria’s Orchids” and “Victoria’s Small Caladenias”. Both guides have exquisite photos. Rudie is a regular visitor to this area to further his work.
The program for the day is to meet at the Chiltern Post Office at 11.30 am for the field trip. Gather at the Senior Citizens Hall from 5pm onwards. Dinner will be at 6.00pm to be followed by a brief AGM and the guest speaker.
Members are asked to bring along a meal to share. Please RSVP by August 30th and it would be helpful if members could also indicate what food they may bring. This will help to organise any extra catering required. 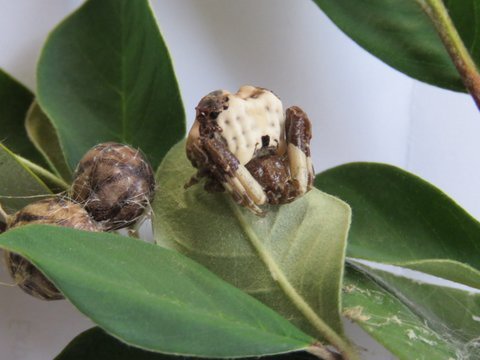 This is a female spider, Celaenia excavata. This spider hunts by night using moth attracting pheromones. Several groups of spiders use this strategy to avoid being eaten by day-active predators like birds and wasps. In addition they have bodies that look like unappetising bird droppings. A great strategy as nothing likes to eat bird poo! One of the best known Bird-dropping Spiders is Celaenia excavata. Other names for this spider are the Death's Head Spider, as its markings can also resemble the shape of a skull, and the Orchard Spider, because it is often seen on fruit trees where moths, one of its main food sources, may be abundant.   The Bird-dropping Spider also uses mimicry of a quite different sort to capture its prey, which consists almost exclusively of male moths. At night the Bird-dropping Spider hangs from the foliage on a short silk thread, its forelegs outstretched. While doing this it releases a chemical scent (pheromone) that mimics the airborne sex pheromone released by female moths to attract their mates. The unsuspecting male moths are attracted by the spider's deceiving pheromone and eventually fly close enough to the spider to be grabbed by its strong front legs. Another interesting feature of this spider is its egg sac. Bird-dropping Spiders can produce up to 13 egg cases. They are dark brown with black markings and, when suspended in the web, look like a bunch of dark grapes. The female keeps watch over them. Web pic. Thank you Richard for sharing this photo.

A new infestation of olives has been reported by Eileen and Brian near the Pooleys/White Box Rd junction. Most are now  dealt with but that area may repay another expedition. Briars on Grasslands will need checking. A big effort has been put into clearing Mt Ochtertyre Reserve (towards Howlong) of olives, peppercorns and blackberries. There still remains more to be done. This is a great bushland reserve so if you can offer some assistance it would be appreciated. Rutherglen Nature Reserve also has about twelve large briars to be exterminated. 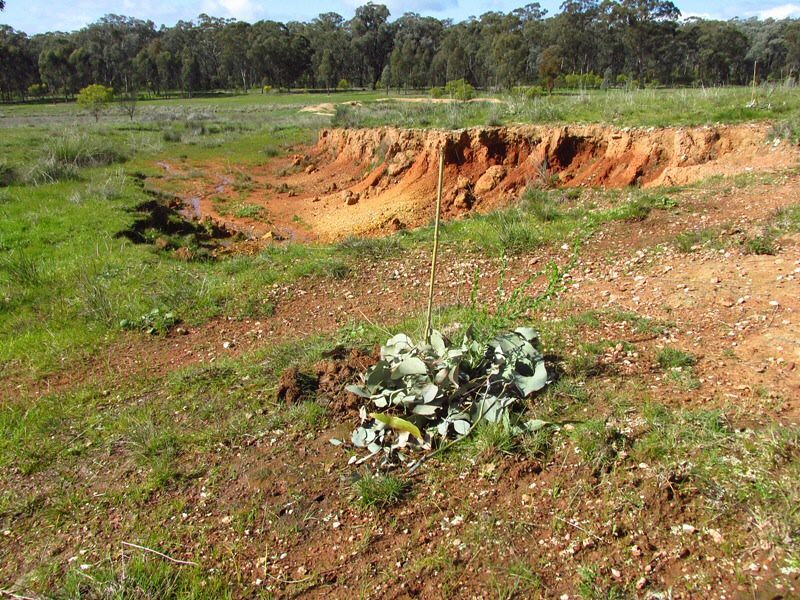 Mick and Tony are doing a great job on the weeds, thankyou boys! NB Everyone keep your eyes open for Cootamundra Wattles and notify us of any sightings. Stop press: Mick and slave have planted forty hedge wattles on Grassslands to try to stem the erosion around the dams. Further planting will take place in the coming weeks so if you are able to help give Mick a call on: 0429 017 229. Grasslands is a great place to work.

Having noted in the previous newsletter I wouldn’t expect to see native bees in July I was delighted, and slightly miffed, to spot several species during the month! With the sun out and the temperature a little warmer than it had been, I spied two species of native bee on the 7th of July, followed by an additional species on the 11th, and a further three species over the weekend of the 16th and 17th. So much for no native bees in July!
Dr Ken Walker at Museum Victoria kindly identified them on the Bowerbird.org.au website. He too noted there are few records of July sightings for native bees, especially this far south. Plus, one of the bees (Lasioglossum Chilalictus adustum) made for a new, southern-most record for the species. This bee was only first described in 1995, by Dr Walker! It was a tiny bee, just a few millimetres long, and foraging on Thryptomene – a plant that is typically very popular with many types of flies. See collage of six bees. IDs at the end of the article.
August marks the start of a new season for native bees. You’ll start to see them as the temperatures rise, the daylight hours lengthen and spring wildflowers begin to bloom.
Around Chiltern Mt Pilot, your best bets for sighting native bees this month will be on early flowers like Purple Coral-pea, Hovea and Twining Glycine. In my garden the first ‘spring bees’ (Trichocolletes) appeared on the Hardenbergia on the 2nd of August – a week earlier than last year. In the Park last Sunday, we saw one of these bees darting between Hovea flowers near the Indigo goldfields cemetery.
These ‘spring bees’ look similar to honey bees. They are black with gold bands on their abdomen, and gold hairs on their thorax. Honey bees tend to have less pronounced ‘bands’ and vary in color and pattern more.
If you watch bees on some of the purple pea flowers, you’ll be able to notice the difference in flight pattern between these two bee types. The spring bees dart around a lot and have quick flights between flowers when feeding. They push the flower open as they land on it, and generally curl their abdomen below themselves as they feed. Honey bees will tend to drift more sedately between the flowers and only occasionally curl their body while feeding. Both these types of bees have a fairly loud buzz. You will also hear the pitch and length of the spring bees’ buzz change when a male bee tells another male to ‘buzz off’ and when attempting to mate with a female.
Also keep an eye out on the wattles for bees. This week honey bees and hoverflies were all over the acacias at Bartley’s block. As the weather warms, you can expect to see some native bees join them on these flowers. As they are smaller than honey bees, you need to look closely. They can be entirely hidden within the golden flowers much of the time. Thank you Karen for this report and the superb photographs. 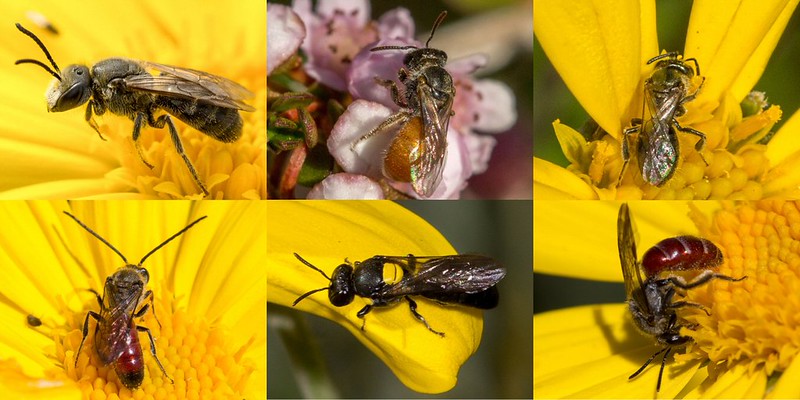 This is our Annual General Meeting
We will meet at the Post Office at 11.30am for an afternoon in the park, with Rudie Kuiter. Rudie is an orchid specialist and he is working on insects that pollinate orchids. A magnifying glass would be good to bring if you have one. Lunch, binoculars, chair, repellant, sunscreen would all be useful. Please see the AGM item in newsletter text above for more details. Contact 0407 486 480.

Friends have achieved a great deal during the past year. Surveys for plants, birds and monitoring, maintaining and surveying mammal boxes, tree planting, weed control and provision of interpretive signage and park furniture are just some of our contributions. Your support for our activities is valued and your membership renewal is vital to our cause. Membership expires on June 30th 2016. Please ensure your contact details are current.

Method 2 Print and Complete and mail this application

Please find enclosed my membership of $15 for 2016-2017 The fee covers the whole family and includes 11 newsletters.

If you wish to pay electronically the details are:
Acc Name: Friends of Chiltern-Mt Pilot National Park
Bank: WAW Credit Union Co-operative Ltd (Cuscal Limited)
BSB number: 803070
Acc number:  81167
Please add your surname to the transaction.
Please advise Neville (This email address is being protected from spambots. You need JavaScript enabled to view it.) when you have made the payment so that we can keep track of payments.