As predicted our March meeting day was very warm but that did not deter ten members from tackling the huge task of watering the grasslands plants. Thanks to Jason and Mick who supplied the 1200 litres of water and to all who brought buckets and carried water. After two hours the task was completed. Guards, stakes and weed mats were collected from the deceased plants and stored in stock feed bags for future use. Hopefully this will be the last of the watering if the predicted rain falls on the site.

The huge Ironbark at the storage site provided great shade and we enjoyed morning tea and bun beneath it with a light breeze flowing through and magpies carolling overhead.

Perhaps the most productive areas in the park are in the post fire re-growth. Elsewhere the understorey has taken a pounding from the very tough summer. Drooping Mistletoe, Amyema pendula, is in good flower and is usually a good summer bird attracting species but many of the flowers are devoid of nectar this year. Neville caught this Yellow-tufted Honeyeater in a clump on White Box Walk. 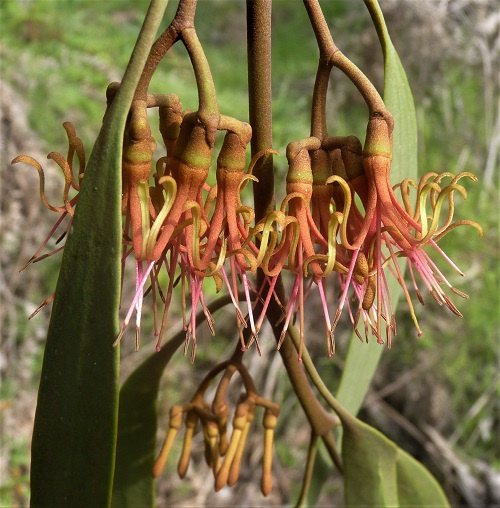 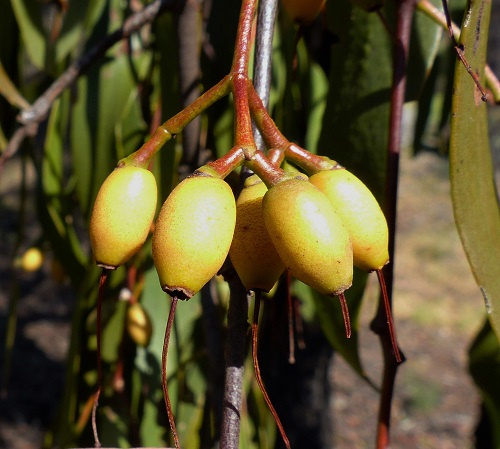 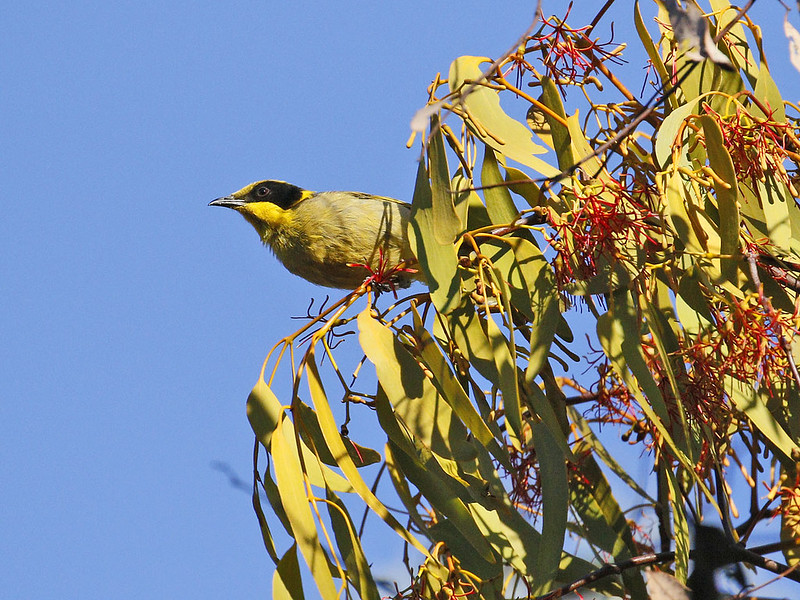 Some feral species flourish in the adverse conditions and Neville caught this fox unawares. I must say it looks in the best of health! 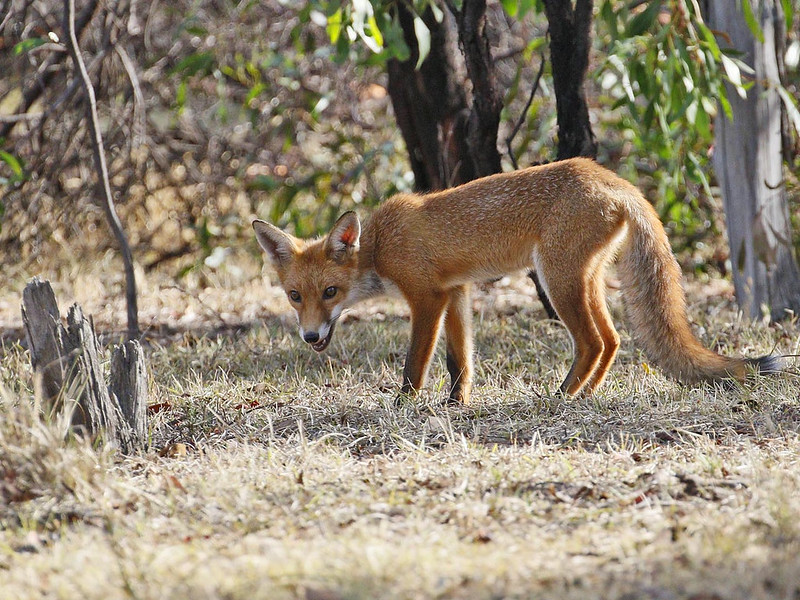 Jennifer was at the Rutherglen block undertaking a bird count and disturbed a fox in the exclosure. It smartly scrambled up and over the fence! Despite the dry conditions Bartley’s Block is still attracting bird watchers. Tuan campsite has been well used and pleasingly has been left clean. The adjacent dam still has water in it and surprisingly Little Friarbirds are present there in good numbers

Road. They were well camouflaged on the dusty road. Each caterpillar lays out a silken thread for the following one. In the park they target Golden Wattle foliage on which they feed at night and can often defoliate a tree. They build a cone-shaped silken shelter at the base of a wattle. Their hairs are irritants so they are best left alone! 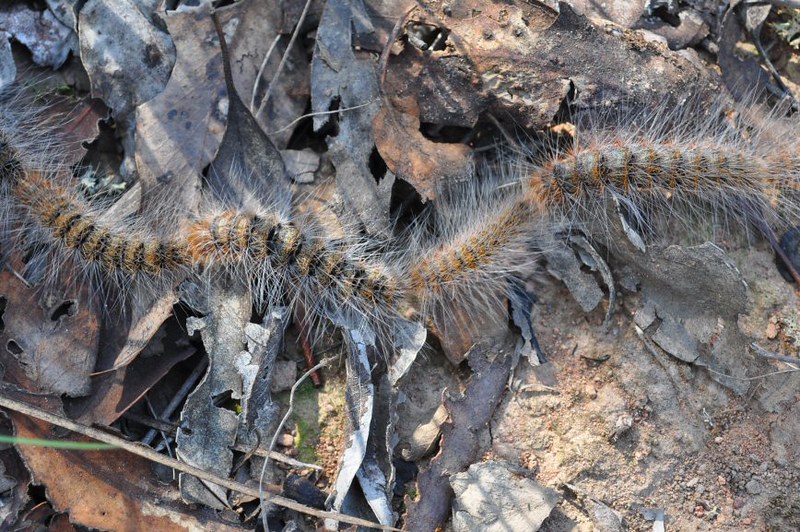 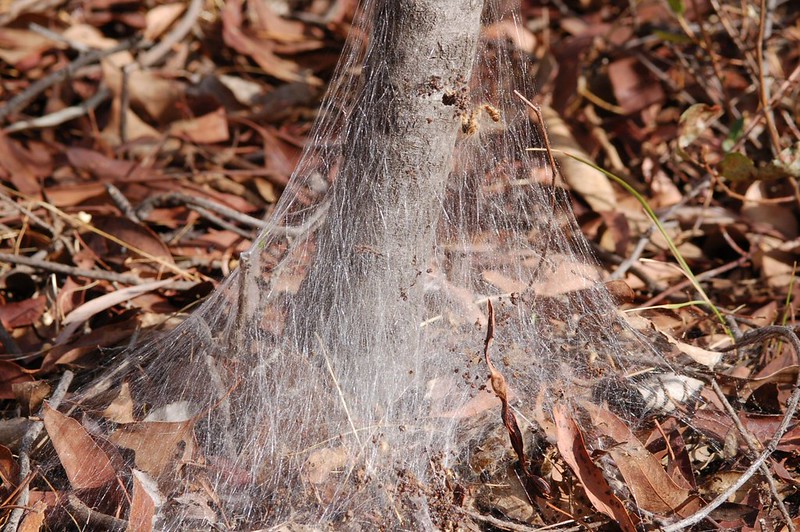 The section of Rutherglen Road that leads up to Depot Rd is a most uninviting entrance to the park. This is due to the indiscriminate grading and pushing of vegetation by Vic-Roads. The dead vegetation plus the accumulated litter is unsightly and a fire hazard. A request to have it removed was unsuccessful. 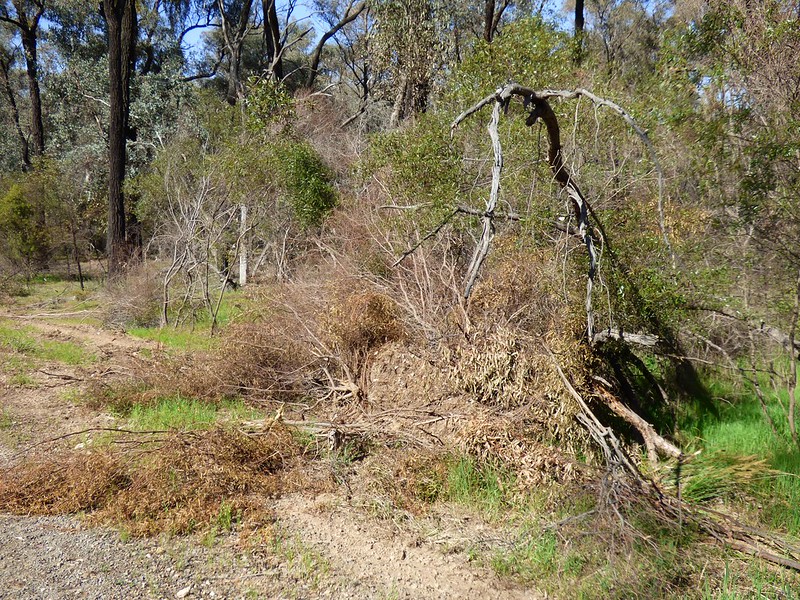 Jennifer was surprised to find a Blind Snake trapped in her cattle grid. These tiny snakes live mostly underground and are rarely encountered in the open. They have shiny skin and their tiny eyes are covered by scales.They have been found in the park from time to time under old metal rubbish which often has a Bull Ant nest amongst it. This is not surprising as their diet consists of ant larvae and pupae along with termites. They lay some thirty eggs in the soil. 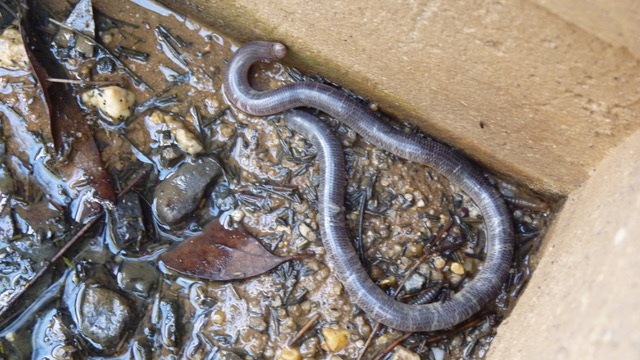 Jan has been busy chasing butterflies and she snapped this one making the most of what the Capeweed has to offer. It is a Yellow Ochre, Trapezites lutea and is listed as uncommon. It is found in open forest and woodland. Its larval food plants are various Lomandra species. 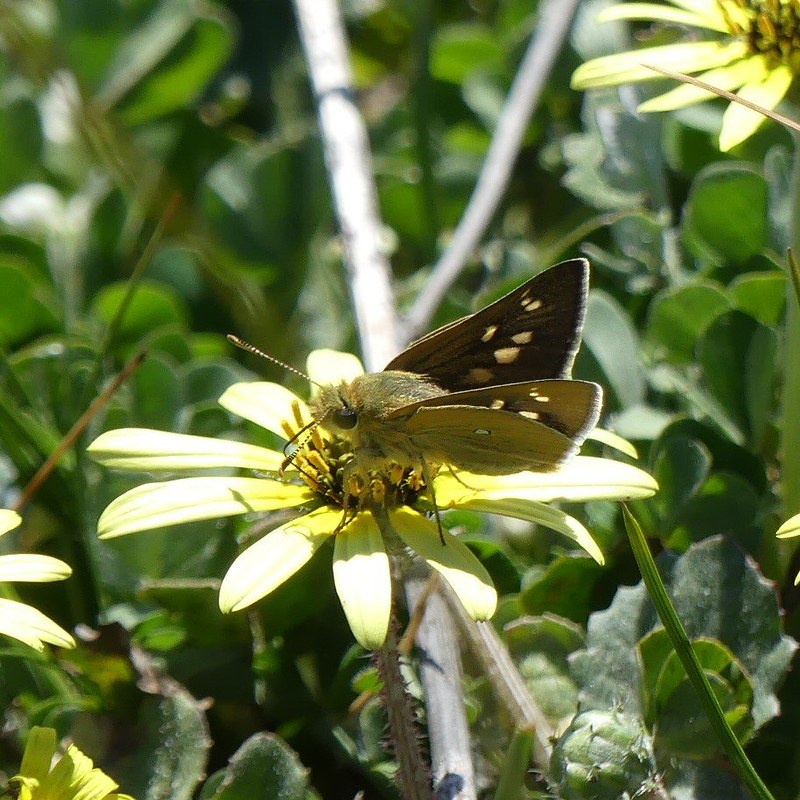 With the slightly cooler weather Tony and Mick have undertaken some weed removal near Pooleys Track including about two hundred small olives from seeds that must be many years old. This will be an ongoing job. Six or eight large trees which have had several treatments are still struggling on and have been re-treated. There is no evidence of any re-sprouting or seeding from the trees which were burned along Coyles Track in late 2015, which is good.

Bathurst Burr and Colocynth ( Paddy Melon), have been located and killed at Grasslands, but we will need to keep vigilant for these, as well as the usual old briar problems and a few blackberries. 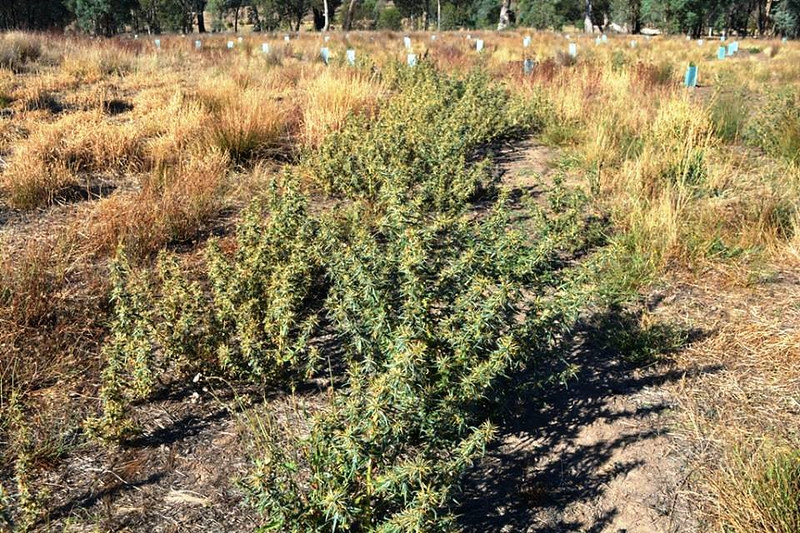 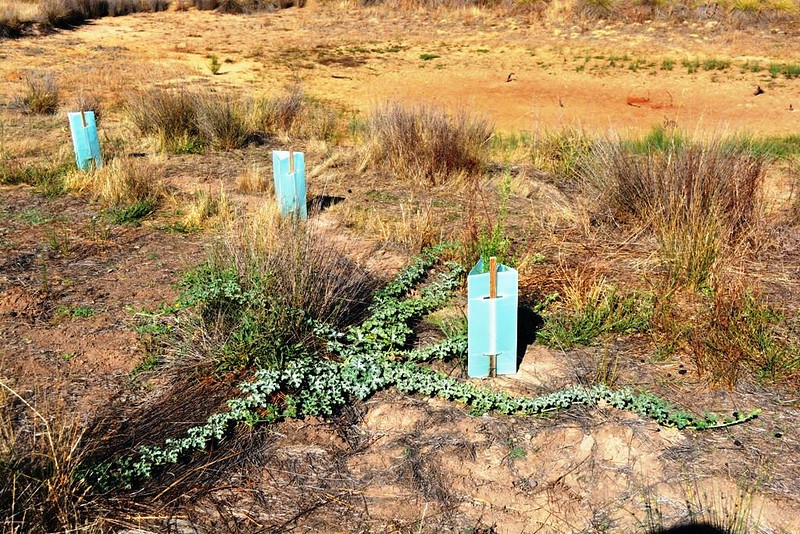 About a half of the new plantings at Grasslands will have had at least some watering when you read this. Hopefully we will get at least three quarters of the new plants over this very hot dry summer. The forty or so Banksia marginata seedlings on Settlers and Wardens Roads have also had several drinks over summer as well as our three isolated Acacia aspera plants. Luckily the Cryptandra amara population seems to be enjoying the drought and the protection from wallaby grazing.

Note: The seed of all three species is spread by animals, Bathurst Burr attaches to the fur, and Paddy Melon and Blackberry are eaten and the seeds spread in the faeces. Unfortunately the burr and melons are additional weeds we have inherited through the acquisition of the Grasslands block. Disposal of the seed heads will be critical if control is to be successful. 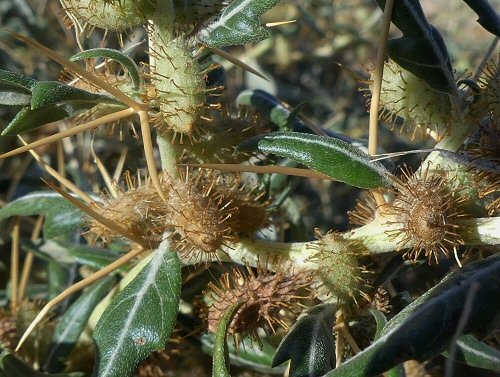 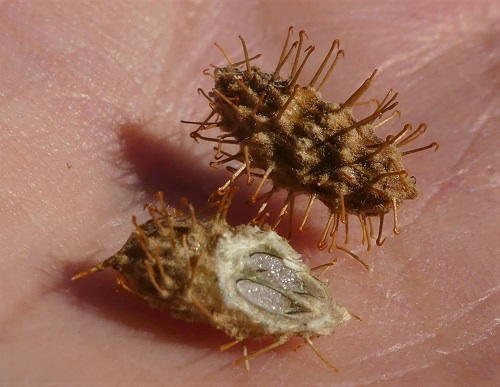 On Saturday February 23 rd Mick,Tony, Helen and Jason Lawrence distributed 500 litres of water to the thirstyplants. They also made a start on collecting the stakes and guards from the deceased plants. Well done all. 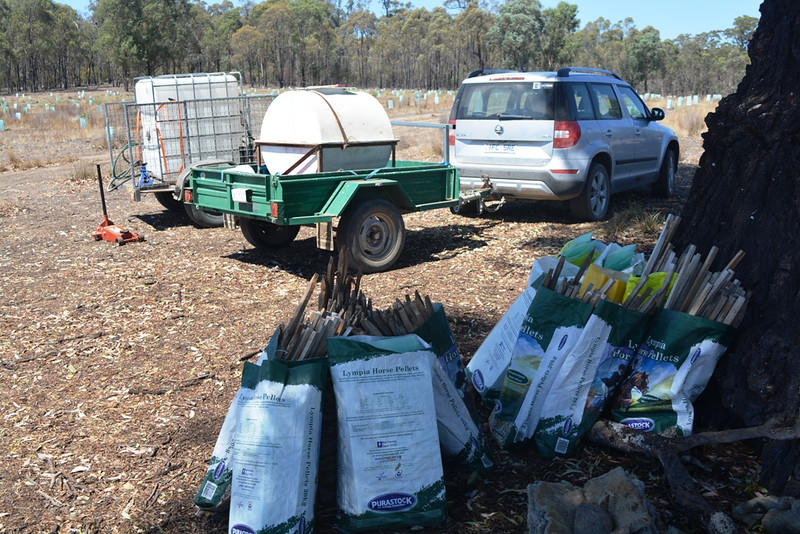 Most of the focus for the past month has been on fire readiness and suppression with staff being deployed to support fires in Gippsland. Trees and limbs continue to fall on roads and the park is showing all the signs of drought stress.Visitation is low as is normal at this time of year.