Roy Collins passed away on 17th April 2018 after a long illness. Roy’s life was commemorated at a funeral service in Albury on 23rd April followed by a gathering in Chiltern at which we all shared memories of this quiet achiever. In his working life Roy was a passionate teacher and retired in the early 1980s. Eileen and Roy were married for 63 years and shared their interest in nature and enjoyed many hours together in the park. Roy preferred to work in the background but over time we all came to appreciate just how much he was contributing to the Friends group without any fuss or fanfare.  We will miss him greatly.Neville – Secretary/Treasurer

Finally the long dry was broken by welcome gentle rain on March 24th only to dry off again very quickly.Sunday April 8th just seemed like an extension of summer so since we had a huge pile of mulch to spread at the Tuan campsite plantings we tackled that job while it was cooler. Since there were eighteen willing workers it did not take long. The campsite has had plenty of use and it has been pleasing to find it left rubbish free. 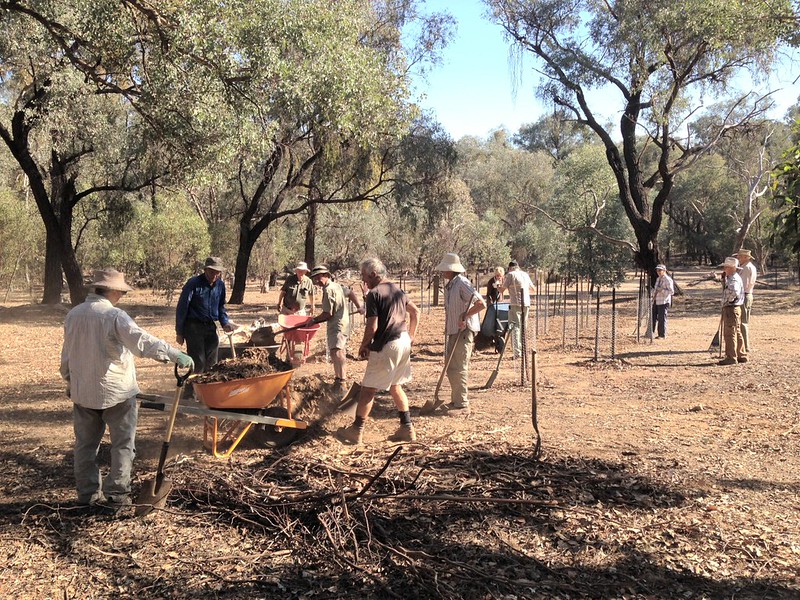 Re-routing part of the Tuan Track walk at the Bartley’s end was next on the agenda, well it was until someone decided it was morning tea and bun time. During morning tea we had a quick meeting and ranger Brian explained the function of the new Park Connect system. The order for vests, caps and gloves has arrived and the items will be distributed at the May meeting..
Richard decided that the old rusty barbed wire on the Bartley fence should be removed so we broke into two groups. One group  re-routed  the walking track to follow a track parallel to the road instead of through the block. Minimal raking was required and at later date we will place direction arrows. In the meantime it is flagged with tape. 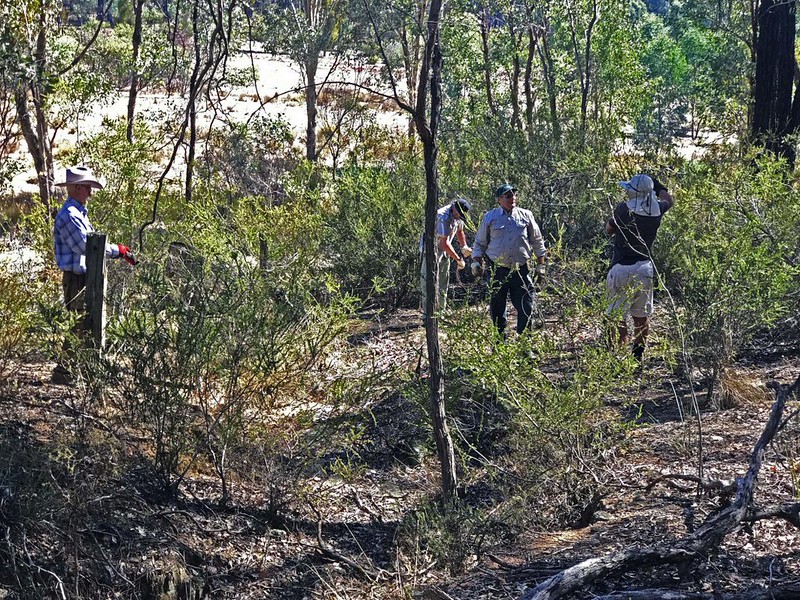 The second group tackled the removal of barbed wire on the eastern boundary. Richard took on the task of removing the barbed wire from the remaining sides. Great job, thank you.

There are Regent Honeyeaters about, with three reports in various areas of the park.Simon spotted one at his place and Liz has a camera on a water point in a private garden adjacent to the park in the Klotz Track area. One of the three is known to be unbanded and making the normal wild Regent call. An unusual visitor to the area also spotted by Simon at his dam was a Yellow Plumed Honeyeater. This bird is the same size as the common White-plumed Honeyeater but has heavily streaked underparts and a conspicuous upswept yellow plume - photo by Nick Borrow CC2 licensed 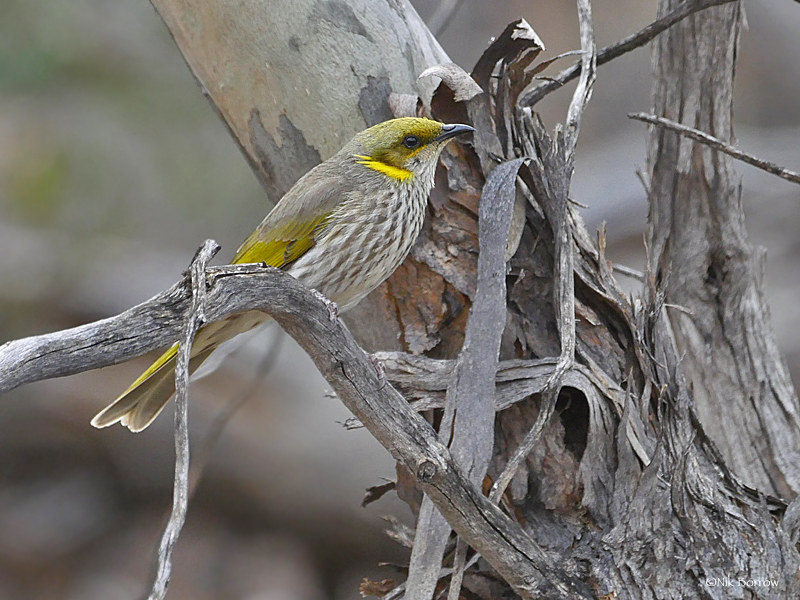 Currawongs are down from the mountains and the summer migrants are moving north.Presently there is no obvious flowering in the park. While these dry conditions persist the dams are the best spots for bird watching. All the park dams have water except the two at Bartley's block.

Woody weeds have kept quiet over summer, thanks to the dry weather - although I recently visited three large olives near Pooleys Track which will need constant attention. Bathurst Burrs and briars have popped up their heads at Grasslands block, and Tony has bagged a lot of Burr and they will be burnt as they are not allowed to be put in the green bin. One project over autumn-winter will be to visit the isolated areas of the Park which haven't been checked for several years.
Chiltern Landcare, mainly Helen Carse and Tony Murnane, have done a great job  removing woody weeds along roads near the town. These were posing a danger to nearby areas of the Park. Thank you both.

In the dry autumn we have carried out some watering of isolated and rare plants ( including Acacia aspera and Banksia marginata) . All large Banksias on Settlers Rd have been protected from browsers with wire guards and a plan is being hatched to construct an exclusion plot for small plants. About half of the small Banksias transplanted and protected last year have survived the very dry conditions.

Plants in the old plot on McGuiness Road are doing very well, showing the value of excluding grazing animals. The Cryptandra amaras off Riley’s Rd that were unfenced  have been grazed severely by wallabies and kangaroos  and work will need to be done to protect as many of these as we can. 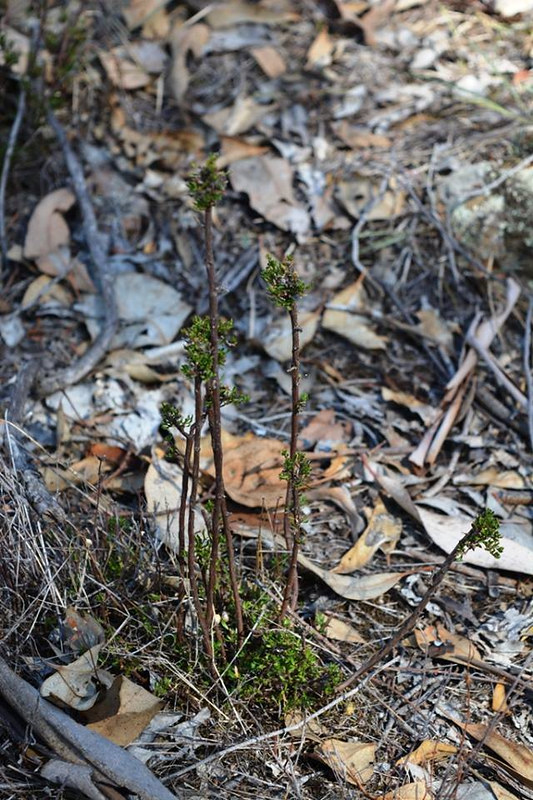 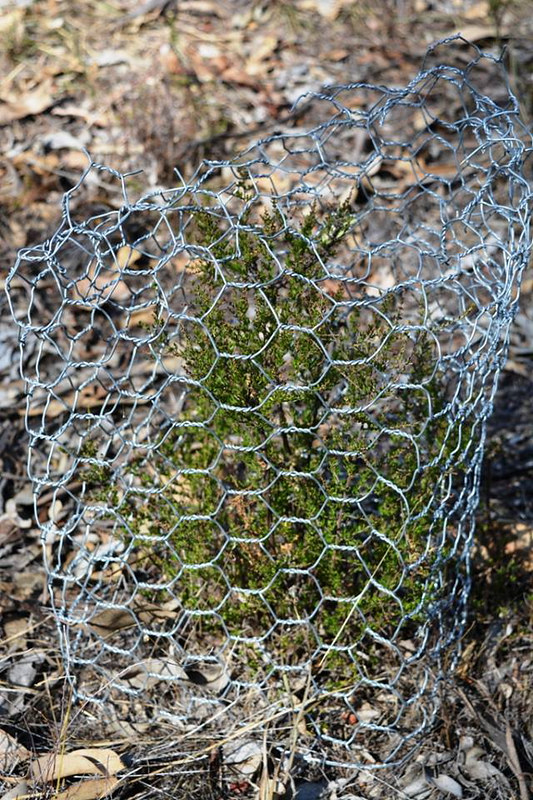 An appeal I made on social media for the public to contribute fencing materials for Park use has been amazing, I now have enough star pickets to last at least a year! Mick Webster.

Winton Wetlands has attracted a multitude of waterbirds and among them are rare visitors, Red-necked Avocets. Jan captured a resting group on March 31st. 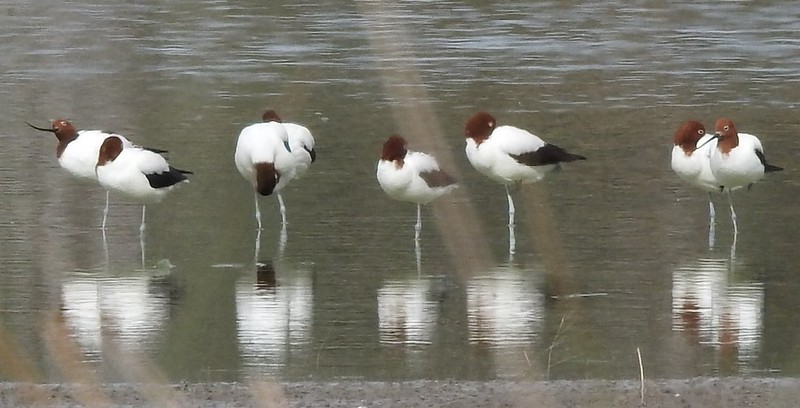 The persistent warm and dry conditions ensured that the spectacle was short-lived.

Enjoy the jazzy dancing of the Feather-horned Beetles, with matching music as well as information in the video clip. See them in action in this clip. Read more in the accompanying blog at karenretra.com/home/rhipicera

If you happen to get the Royal Auto magazine you may have read about this amazingly simple discovery by Dr Peter Dann and Professor John Orbell for cleaning oil from wildlife that have been the victim of an oil spill.The “simple” process took many years to perfect. A special oil-absorbing powder with added magnetic particles is applied to the bird and a magnetic wand is waved over its feathers so lifting off the oil, leaving the feathers perfectly clean. These two amazing men got together in the 1990’s and have achieved a life saving remedy for oil affected wildlife.

Looking back To August 1993

We banked our modest income with the Commonwealth Bank in Chiltern. It no longer exists.Our first major effort was to tackle the erosion at the overflow of Cyanide Dam. After laying the hessian base the Park crew with their machinery  moved the rock pile for spreading. The sedge planting  completed the job.  One would have thought that the work would have slowed the overflow but we learned later that when four inches of rain falls in a weekend the force of water over the overflow is extremely destructive. 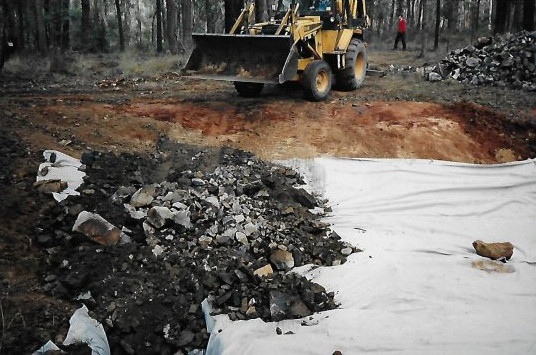 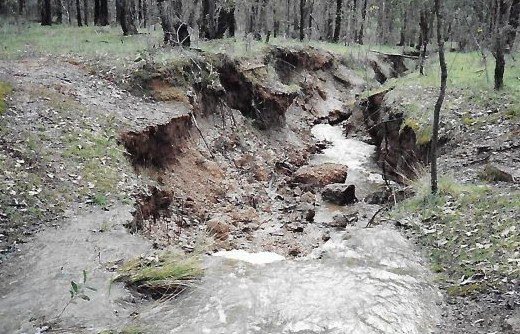 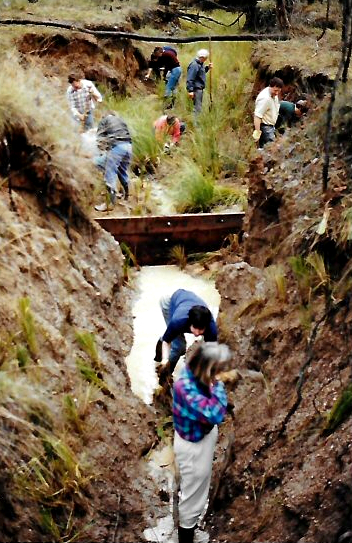 These photos were taken in the days of film cameras!

NEXT MEETING IS ON SATURDAY  MAY 5TH

Meet at the Post Office at 9.00am
BYO chair, gloves, lunch,sunscreen, hat and binoculars. Contact in the field  0407 486 480 Plans for the day include  further guarding of the Cryptandra site and nest box checking.

At least the spring soaks in the Pilot section are still flowing well.....