Dear Friends, Our first meeting of 2018 saw eighteen Friends members gather at Bartley’s Block during a much needed break in the heatwave conditions. The usual culprit, Caper Spurge, was the target for the morning’s ramble over the site while Jan, armed with her spray dealt with other weeds. The resulting low spurge numbers recorded, about 800 plants, was pleasing especially as only a few had unripe seed heads.

The renovation of the ex-vinca bare area was the subject of much discussion. David offered to prepare a re-vegetation plan for the site which will be presented to Parks for approval and for Friends to discuss at the March meeting. For the March meeting it was decided that we would rake all the dried vinca material over the bare area and distribute fallen timber over it to help prevent soil erosion in anticipation of good autumn rains. This will also provide better conditions for revegetation.

The mammal and parrot boxes were checked in the afternoon. Two of the mammal boxes housed Sugar Gliders. Thanks to every one for a productive opening to the year. All we need now is a good autumn break to awaken the ground flora.

To enable visitors to the block to experience its varying habitats a proposal was put forward to create an arrowed route around the block along with a leaflet to interpret each site. Neil and Eileen put forward a proposal to create an “animalia” brochure which would cover commonly seen species. This would complement the flora and bird brochures. This was accepted and possible funding opportunities will be explored. RangerJohn McDonald has left us. After a long career with Parks Victoria John announced his retirement in January 2018. He was farewelled by his colleagues and Friends members at a function at the HUB in Chiltern. 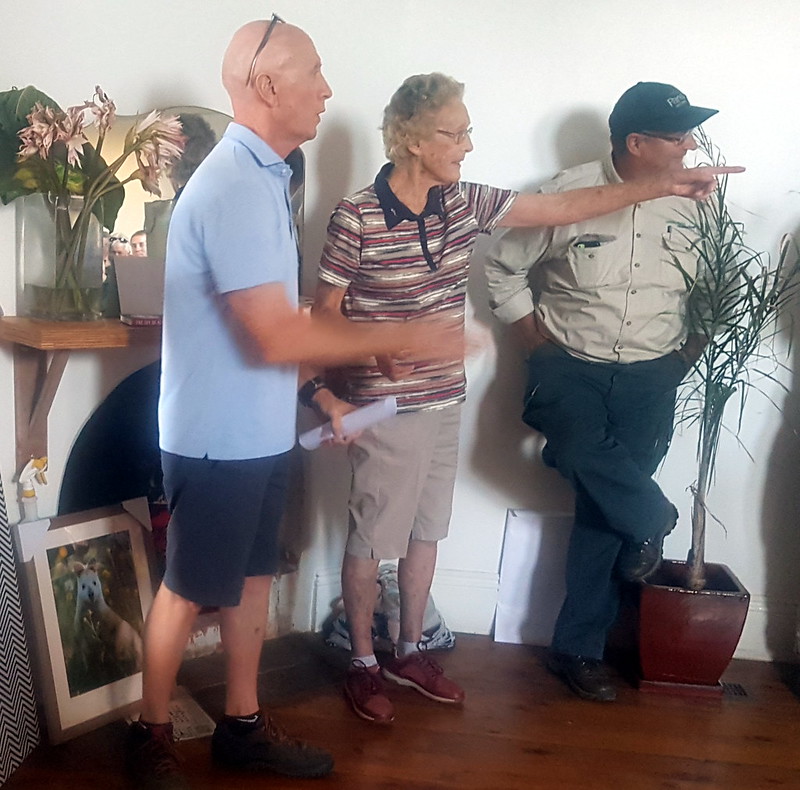 Friends marked this occasion with a presentation of a framed photograph of our famous White Wallaby. David Woolcock provided the wonderful print and Stephanie and Neil organised the framing. We wished John and Alison a long and happy retirement and thanked him for his dedication to our park.

Peter received this honor for his work over seventeen years with the Mallee Fowl Research Group. Several years ago Peter moved to Bright from the Mallee and joined the Friends group. Congratulations Peter.

Peter and his wife Helen (deceased) were both early members of our Friends group and founders of the Friends of the Warbys ( now folded) and the Wangaratta Urban Landcare Group. Both were keen botanists and treasured the natural environment. Peter was especially interested in the Warby Range Grass Trees and his in depth study of them earned him a PhD.

Rove Beetles. Adult Rove Beetles are predators of other insects and carrion in soil and leaf litter.They are often seen at night around light sources. Rove beetles do not bite or sting but their blood contains a strong toxin called pederin that can cause skin and eye irritations. I encountered mine while emptying a fly trap, they were feeding on the fly larvae 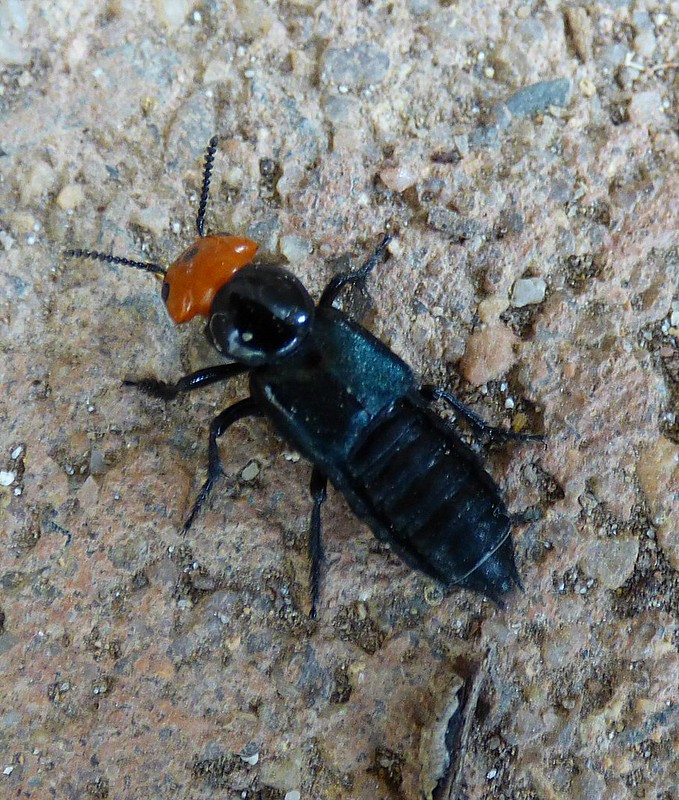 This site maybe of interest: http://www.health.nsw.gov.au/environment/factsheets/Pages/rove-beetles.aspx

A White-tailed Spider is not the most friendly spider to encounter living in your house as one of our members found out. White-tails are nocturnal predators that do not build a web, the one pictured seems to have had a good meal from the spiders that owned the web. The female White-tail spins a silken case to protect her eggs which she guards until they hatch. 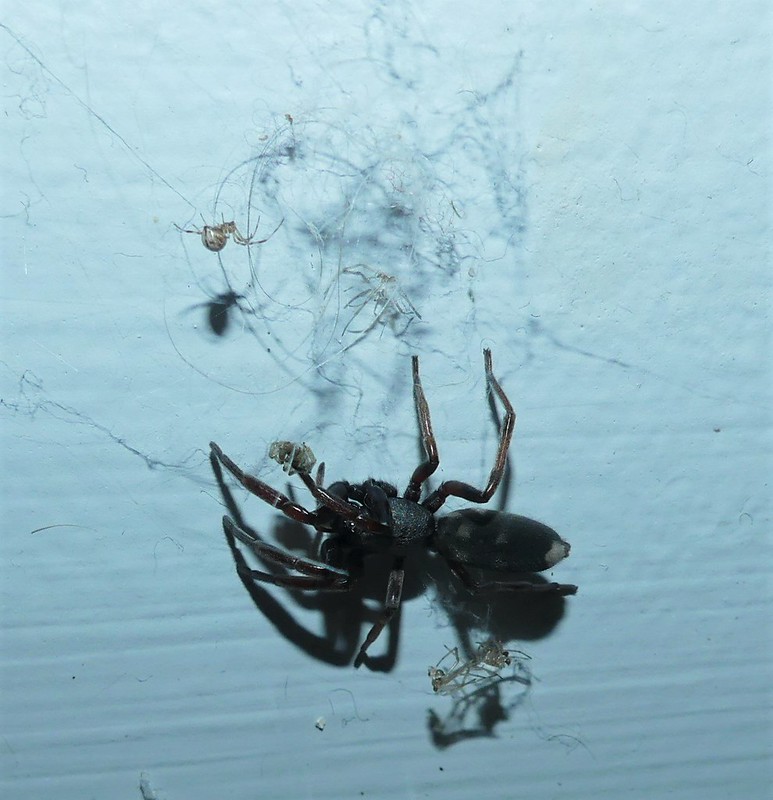 Summer is Cicada time and who could miss the noise of calling males. Sumner Berg snapped this photo of a Yellow Monday Cyclochila australasiae. The Blue Monday and the Greengrocer are colour variations of the same species. 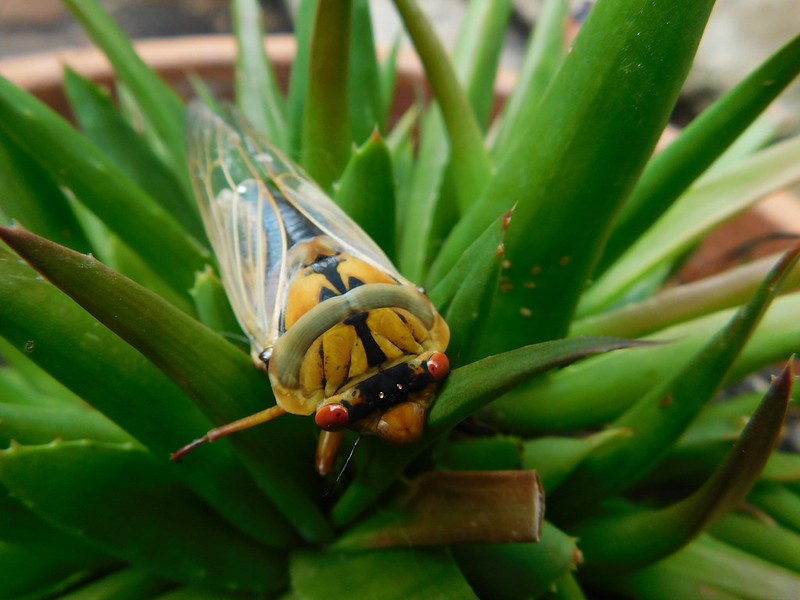 At first this was thought to be a stick insect. However running it past Dr Ken Walker it was surprising to find it was in fact a Katydid! Part of the initial guess was right in that this is a “Twig-mimicking Katydid” Zaprochilus australis. During the day it sits motionless looking like a twig. During the night it moves slowly around its chosen host plant, delicately feeding on the pollen and nectar. 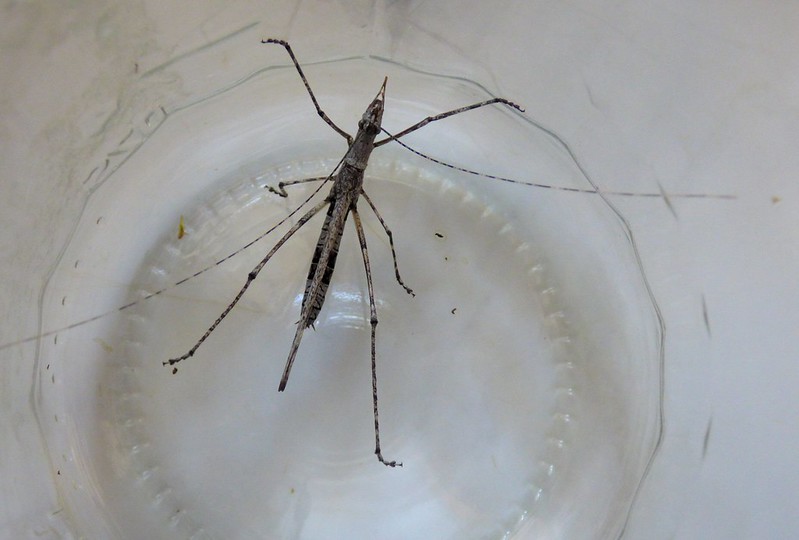 The influx of Scarlet Honeyeaters to the region was one of the bird delights of summer. Lyn and Bill were lucky to have a successful breeding pair in their garden. This juvenile collided with a window and was lucky to be unhurt. It flew off safely after a recovery spell in a box. 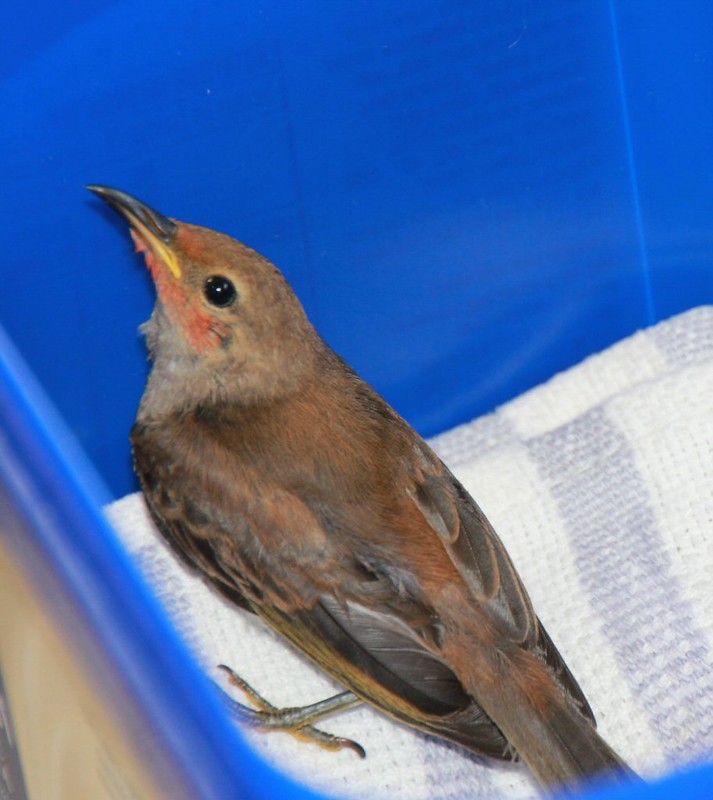 Ranger John McDonald retired on 31 January and a farewell was held on 2 February. Thank you to all Friends for seeing John off in fine style. Recruitment to replace John is underway but will probably take a few months. Four small fires were started by lightning in January, in Pilot West block, but all were extinguished quickly. Skid Steer has been removing debris from roads in preparation for grading in autumn. Planning is underway for replacement of damaged signs in Chiltern Block. Due to the unavailability of timber and high cost of metal straddle signs we will be changing to fingerboard signs for roads Parks Victoria has changed how we manage and support Volunteers. Over the next few months we will help members to register on the new Park Connect system.

NEXT MEETING IS ON SATURDAY MARCH 3RD

Meet at the Post Office at 9.0am We will be working at Bartley’s Block for most of the time. A rake would be a handy tool to bring. We will also check a group of mammal boxes. BYO chair, gloves, lunch,sunscreen, hat and binoculars. Contact in the field 0407 486 480