The heavy rains on the days prior to our December breakup caused us to make emergency plans for an indoor gathering. After inspection of the track into Valley No 2 and checking the radar, it was decided to make that our venue for Christmas Tea.
The dam was full, the birds were in good voice, the weather was pleasantly cool mossies were absent and the table overflowed with delicious food provided by the HUB and paid for by Parks Victoria. What could be better as together we celebrated yet another productive and successful year. To everyone who has contributed in any way, thankyou for your amazing efforts. 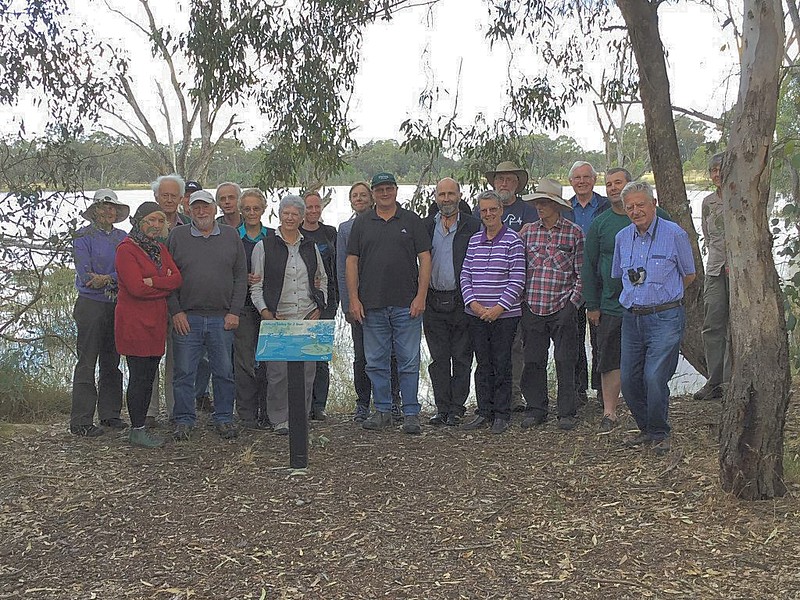 Purple-crowned Lorikeets made us aware of their presence with constant calling. However most of the attention was focused on a Whistling Kite which had dismembered a water rat and was enjoying its meal perched on a dead tree at close range. Cameras worked overtime! It was just a pity nothing was interested in eating the huge carp which were muddying the water below. 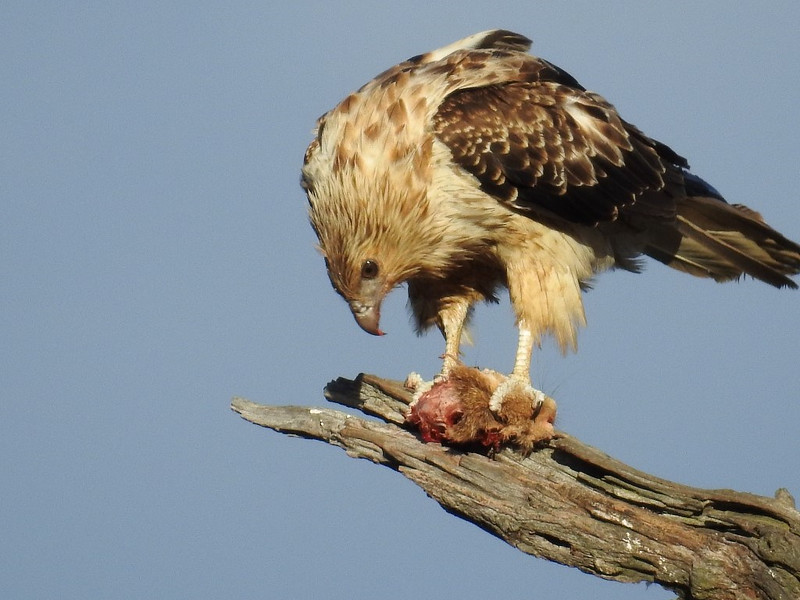 A visit to the Rutherglen block revealed no trace of the Weebill nest shown in the November issue. Despite the Swainsona recta plants setting copious pods it was disappointing to see that all pods had the tell tale hole indicating predation.

Tony and Mick have continued to tackle weeds at Grasslands and Mt Ochtertrye reserve. David has sprayed the horrible patch of Watsonia and Jan has continued her war on thistles at Valley 2. A watch is being kept on the Vinca and Caper Spurge at Bartley’s. Both have enjoyed the last rains and quite a few Spurge plants with green seed heads were found on the last visit. It germinates in any season!

All three outlier dams and Cyanide Dam are full and should provide good bird watching in the coming months.

We usually think of lacewings as small and dainty but this one, captured by Neil, is an Owlfly, Suhpalasca flavipes,is a larger member of the Lacewing family. Its long clubbed erect antennae distinguish it from other lacewings. As its name suggests it is most active at night. 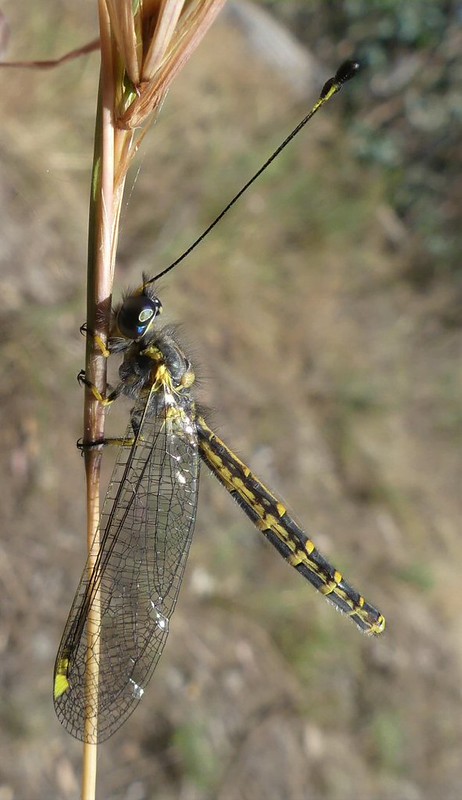 Then we had Spotted Ants, Podomyrma adelaidae, photographed in the Warby Range by Jan. 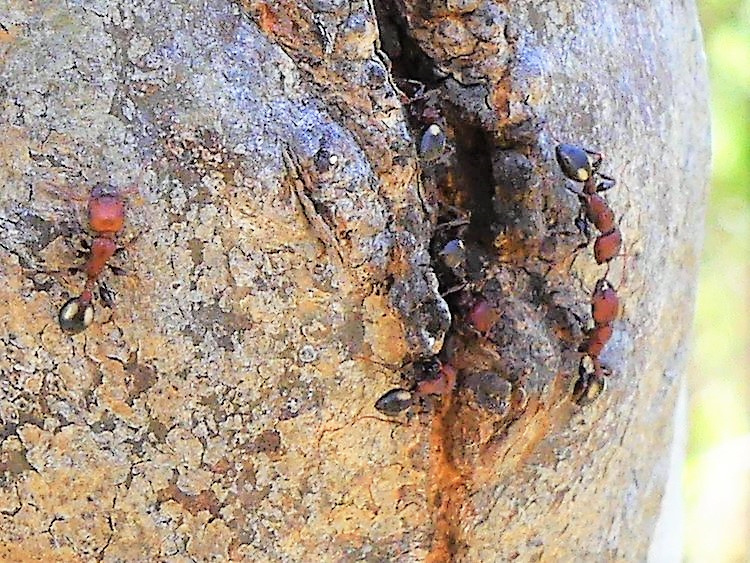 An unusual Scorpion-tailed Spider (Arachnura higginsi) with her egg sac turned up in my garden and with great difficulty Neil managed this photo. Note the little protrusions on the end of the tail. 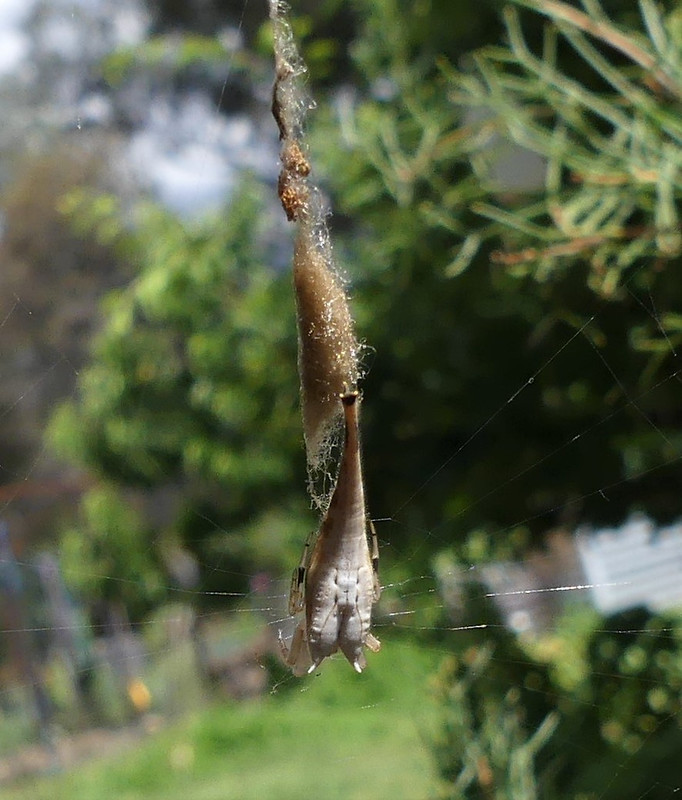 Then to add colour to the show this lovely caterpillar of the Mistletoe Moth was found feeding on Mistletoe. 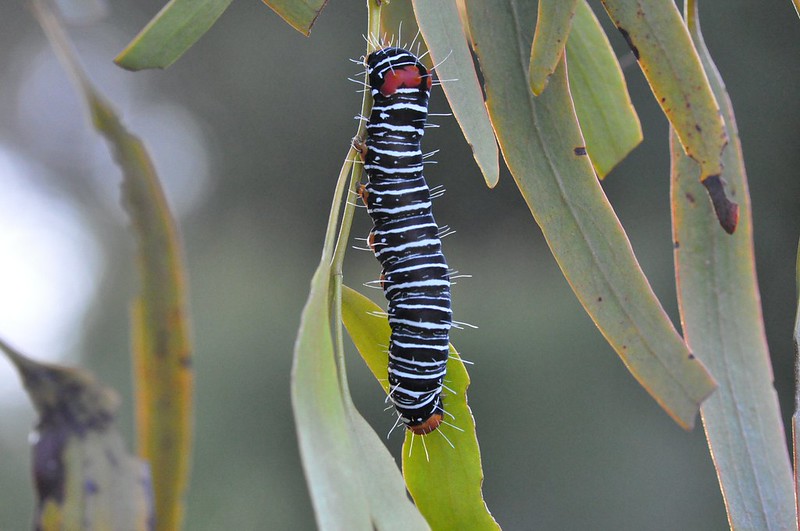 It was observed for several days until it pupated in the soil. The moth of this strikingly coloured species is a day flying moth and these two were caught mating. 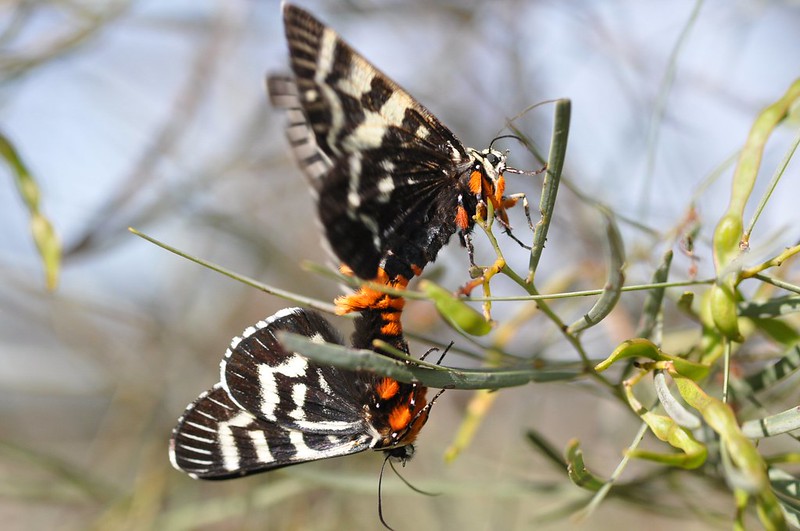 A strange mottled grey creature with long legs and a long thin body arrived on my flywire late one evening. Having no idea how to identify it I sent it to Dr Ken Walker at the Museum. I was amazed to get his reply and description telling me it was a Katydid.

One usually thinks of Katydids being greenish. This species feeds on nectar and pollen and is perfectly camouflaged as it rests on dead twigs. There are no records for this species in North-east Victoria in the Atlas of Living Australia. The insect has a little bit of history attached to it as it was one of the earliest described species of Australian Orthoptera. See this site for more information. http://bunyipco.blogspot.com.au/2008/05/pollen-and-nectar-feeding-katydids.html

On the flora front this aberrant form of Diuris sulphurea had us wondering if we had a new species, well it was a good try but not to be. It later became an animal delicacy so Neil was unable to get any possible podding. 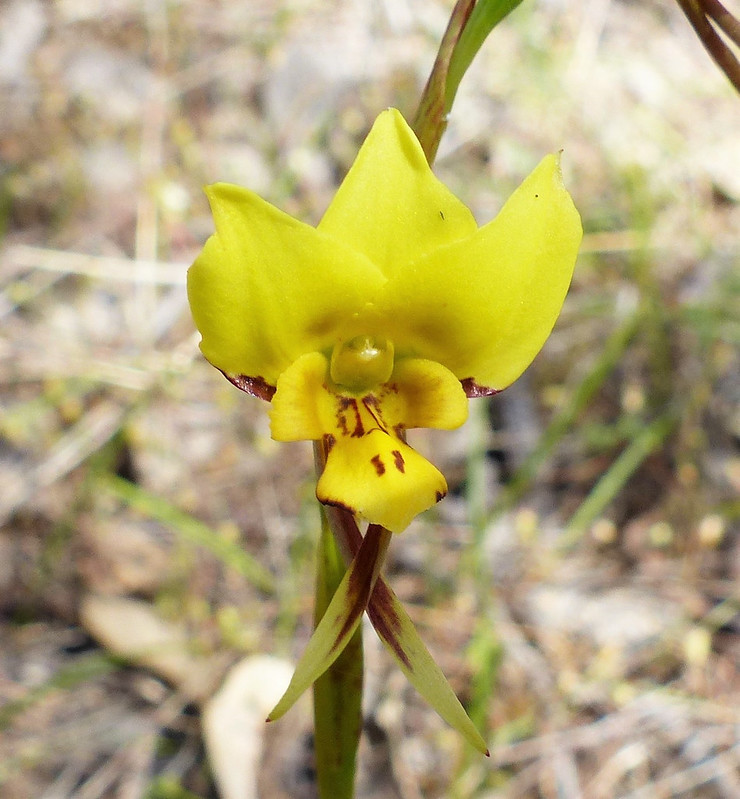 A beautiful creation, taken by Jan. To date there is no one who can identify it. Ideas welcome! 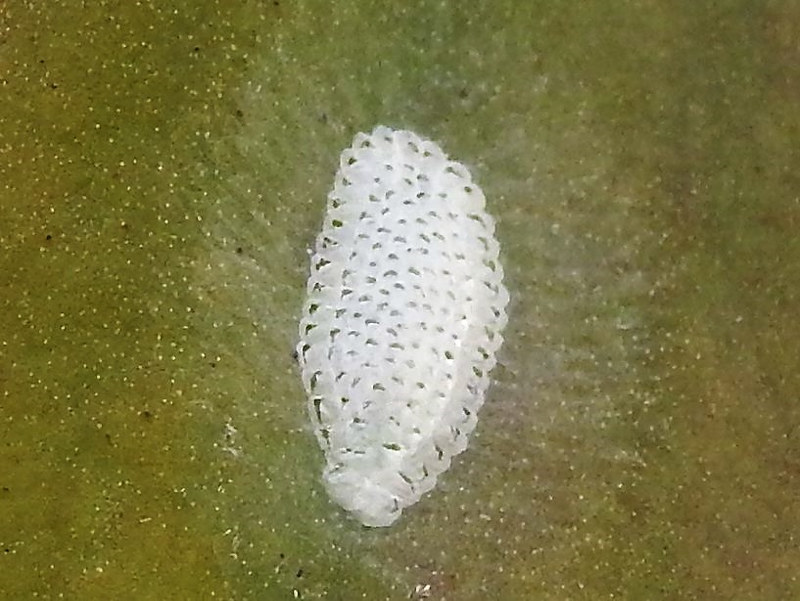 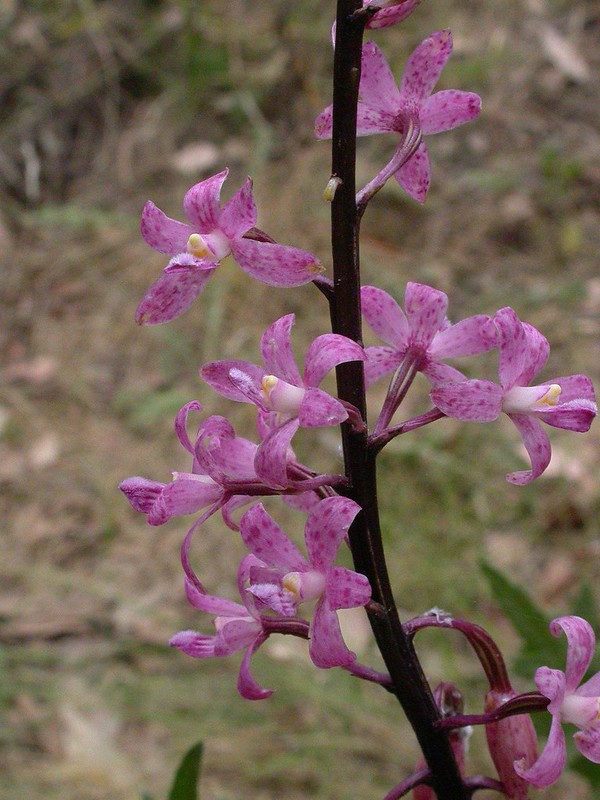 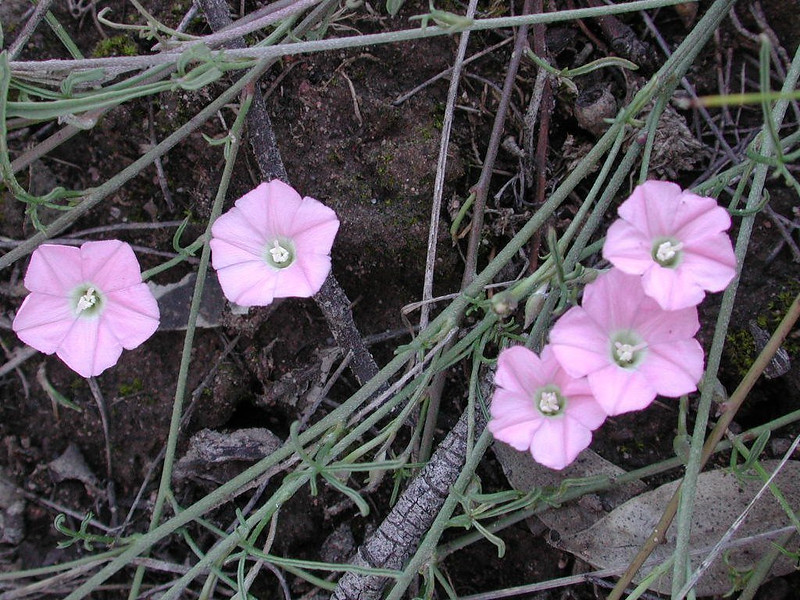 masses of Golden Everlastings on Pipeline track post the rain and pipeline work. 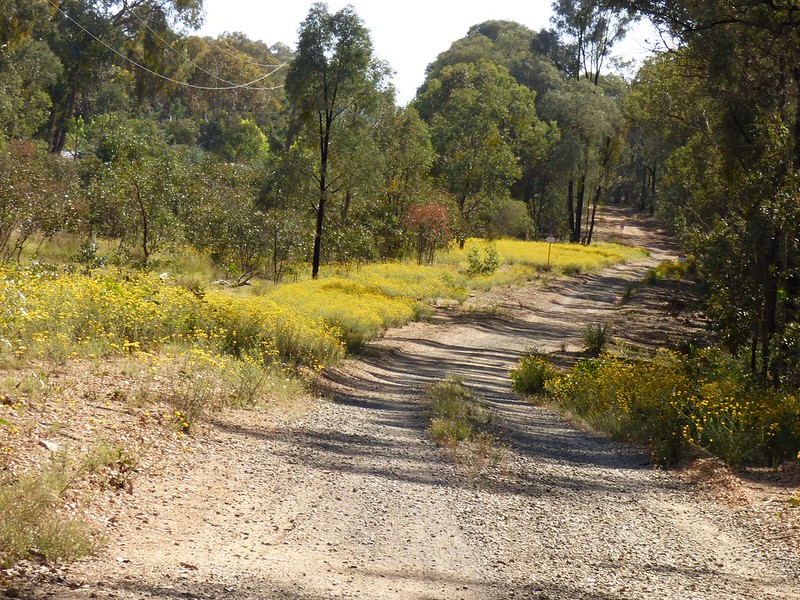 Thankyou to everyone who has supported the calendar sales this year. This is our only fund raising event for the year. Currently there are four left so anyone wanting one will have to be quick.

Works have been completed on clearing tracks and mowing of grass in preparation for summer.
New traffic counter has been installed at Woolshed Falls which will give a better idea on current visitor numbers.
Work is continuing recording and updating all built structures, signage and infrastructure in the park.
Summer is with us with a 650 ha fire in Warby Ovens NP being attended by staff.
A safe and Merry Christmas to all.

Thankyou to everyone who has renewed their membership. Membership now stands at 103.

NEXT MEETING IS ON SUNDAY FEBRUARY 4TH

Meet at the Post Office at 9.0am
The activity will be announced at the end of January and will depend upon the weather.Field contact 0407 486 480
I wish you all a very Happy, Peaceful and Safe Festive Season