A truly winter day with a minus 4 degree start followed by a calm sunny day greeted twenty one members and visitors for our workday at Rutherglen Natural Features Reserve. Seeing so many workers gathered at the post office a quick decision was made to double the bun purchase. On arrival at the block we inspected the enclosure hoping to find that the Swainsona rectas we planted last season had emerged. None were seen but it could be just a little early since plants in other sites have not yet emerged.

The tasks for the day were nest box checking and a survey of the block for emerging olives. To ensure the whole block was covered we broke into groups with each group having a digging tool to remove stubborn plants. The nest box group had the dual task of olive removal and checking.
Morning tea and bun in the sun was a welcome reward and the buns just went round. The olive tally for the day was 500+ , all under one metre in height,with a few Peppercorns and Boxthorn seedlings for good measure. Olive seed, like the Caper Spurge seed persists for years in the soil. A fantastic effort from everyone. 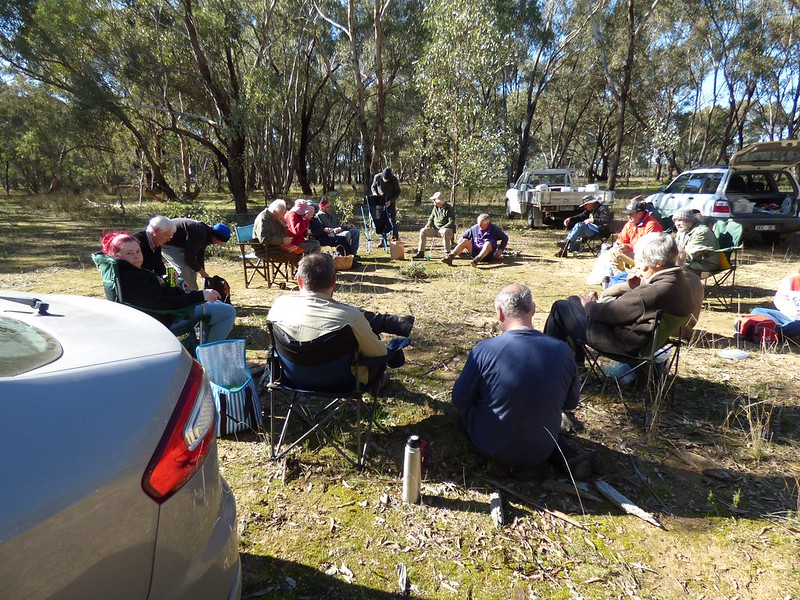 The nest box results were quite different from any other survey we have undertaken over the years. Normally we find a few boxes inhabited by Sugar Gliders. This survey of the fourteen boxes revealed only one box with four Sugar Gliders, one with a lone Squirrel Glider and one with a Tuan in a box that had quite a lot of honeycomb in it. Of the remaining boxes eight contained Tuan nests made with varying materials, wool, feathers, bark and leaves. The leaves were possibly an indication that the box had been used by a glider. All boxes had the tell tale “poo corner” and strong odour. 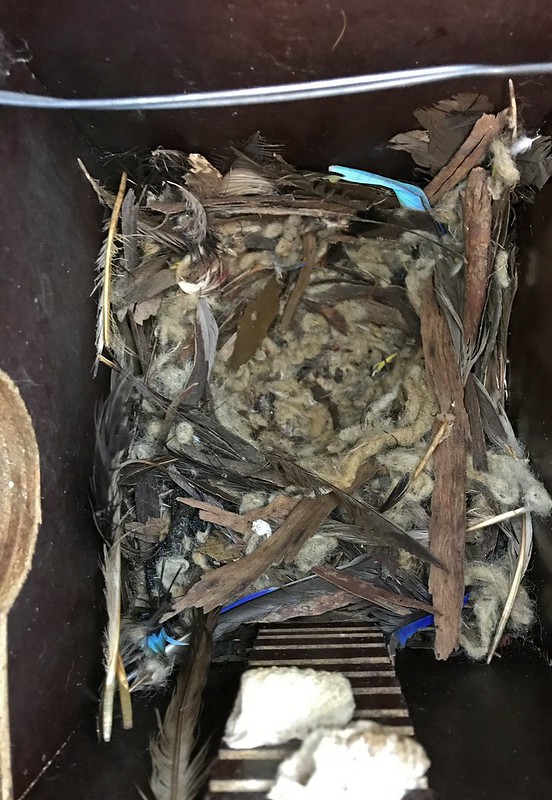 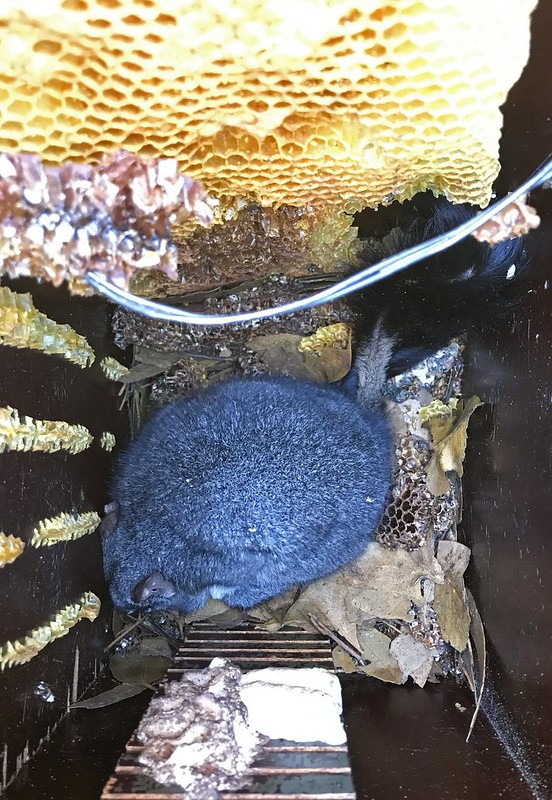 Stray plastic guards from the plantations were collected and recycled. The revegetation has been very successful.

After lunch a group of us went to the northern end of the block to search for any new Peppercorns and inspect the planting. All the plants were thriving in particular the White Cypress Pines and a few stubborn Peppercorns were treated.
Birds for the day included Scarlet Robin, Wedge-tailed Eagle, Noisy Miner, White-plumed Honeyeater, Golden Whistler, Grey Shrike-thrush, White-winged Choughs, Superb Fairy Wren, Magpie and Willie Wagtail.
Fungi spotted were Gymnopilus junonius,Spectacular Rustgill, 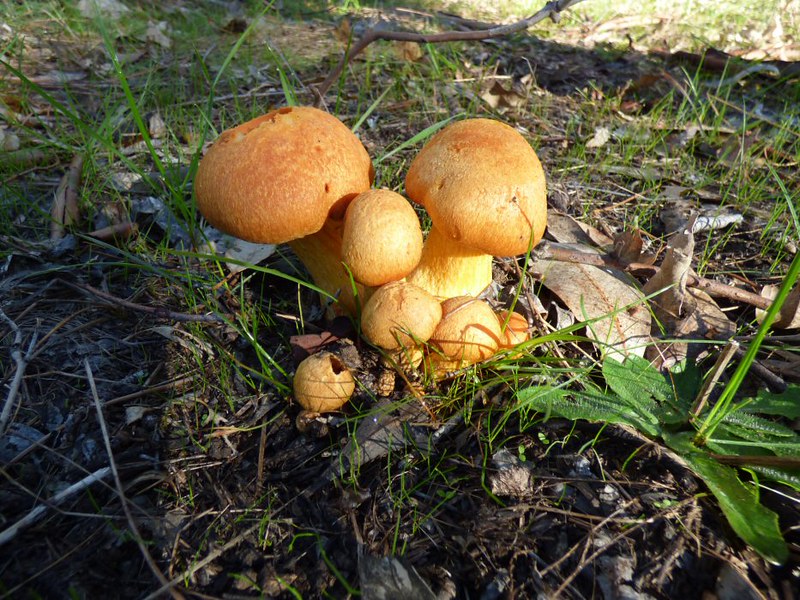 and Tiny golden Jelly Fungi, Calocera sp ,which were adorning fallen dead trees and helping to break down the wood. 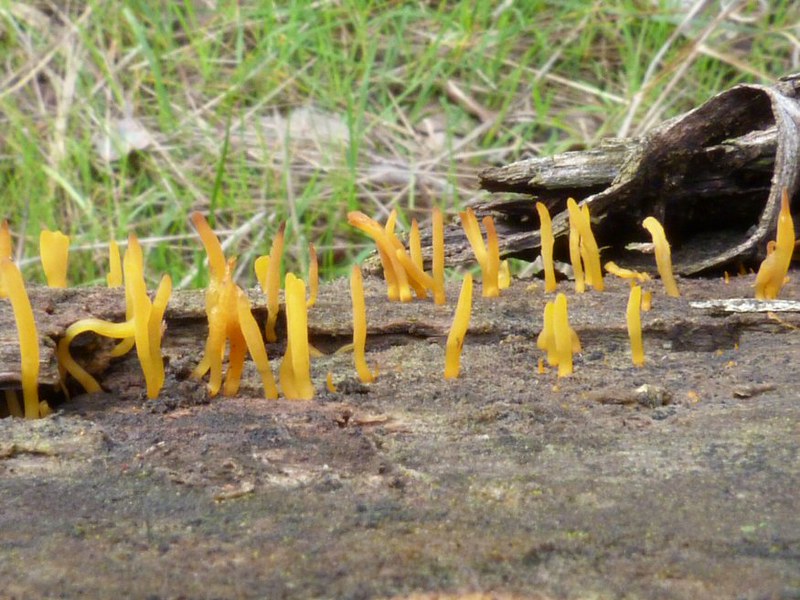 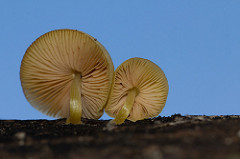 The parks grant came through and materials for 50 boxes were purchased. A working bee was held at Lyn and Bill’s workshop and twelve of us were put to work under Bill’s guidance. Each had a special task and after two sessions the boxes were ready for the finishing touches. Many thanks to Bill and Lyn for the use of their facilities, which made the task so much easier. 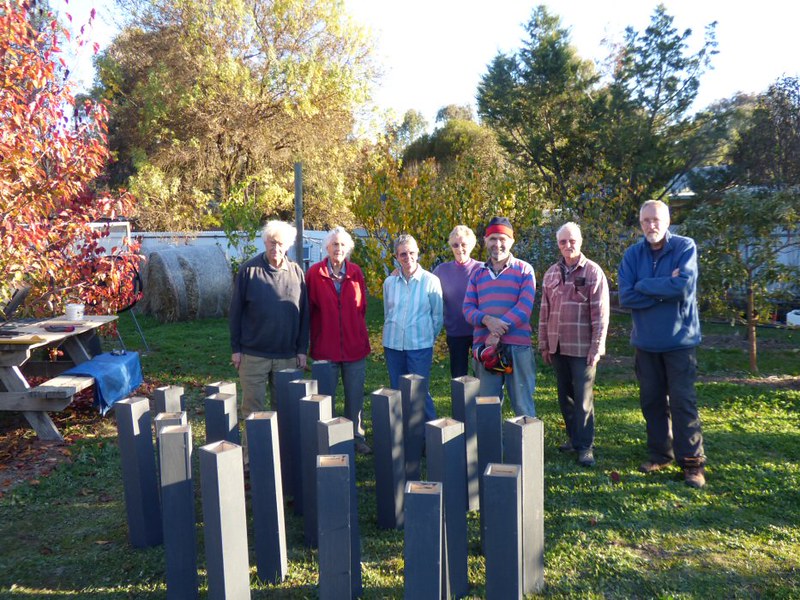 Following the eradication of the Vinca we need to revegetate the bare ground. 150 Carex appressa plants have been orderd and will be planted in the next few weeks. Any help would be appreciated. Seedlings are still emerging on the bare areas and being pulled. The Currawongs, and some humans, have enjoyed the feast of Persimmon fruit from the two trees. 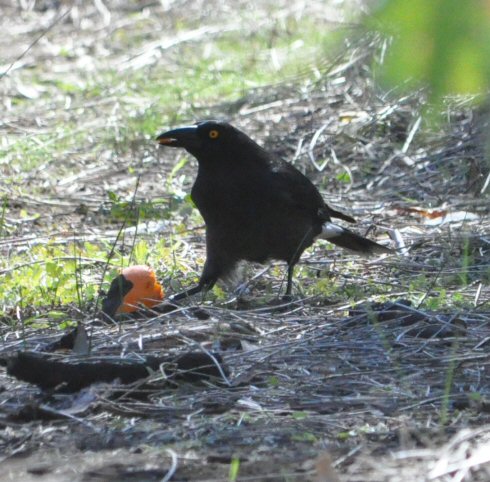 The brochure is now available and we are very pleased with it. We hope it will help visitors and others to identify the more readily encountered species of flowers, orchids and shrubs. It is available at the Chiltern and Rutherglen Information Centres and from several members. 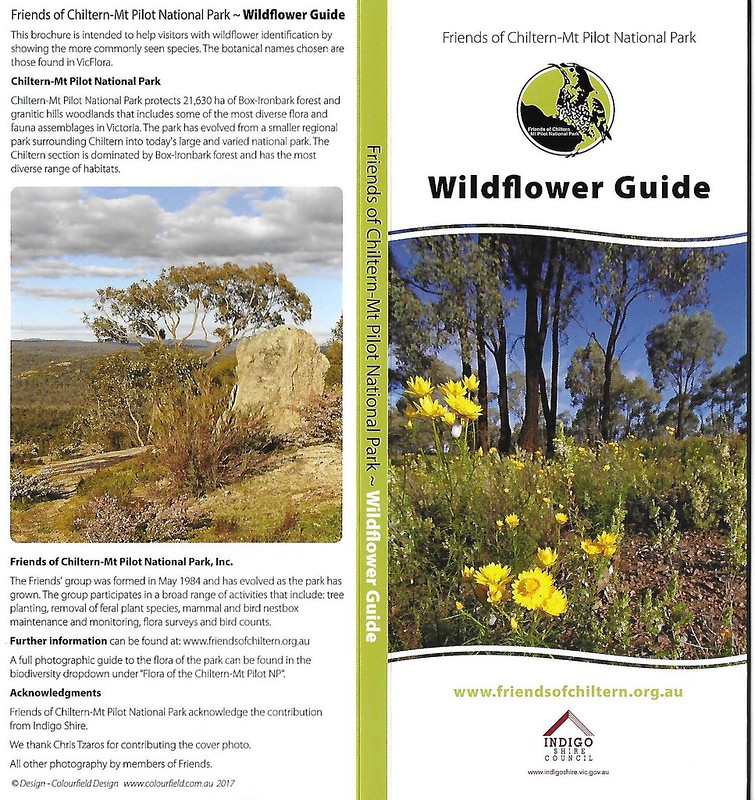 A short time after Rudie Kuiter’s talk on orchid pollinators, at our last AGM, one of our members, Neil Blair, was checking a group of Bearded Greenhoods (Pterostylis plumosa) for our flora website when he noticed an insect moving inside a flower see pic 1. 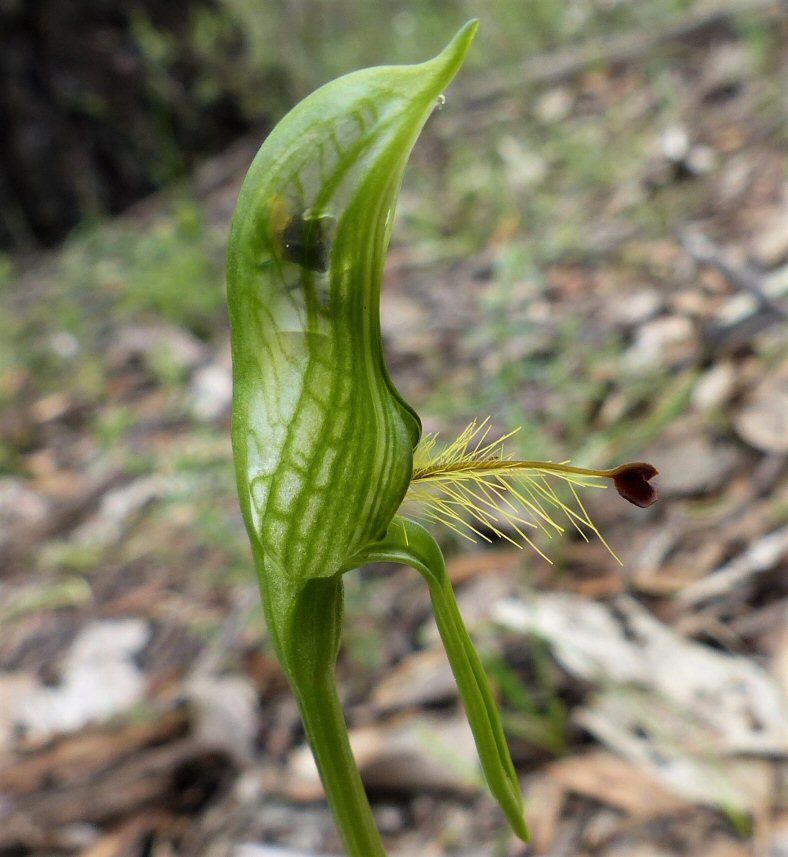 After a few minutes the insect emerged, see pic 2, with the orchid’s pollinia attached. 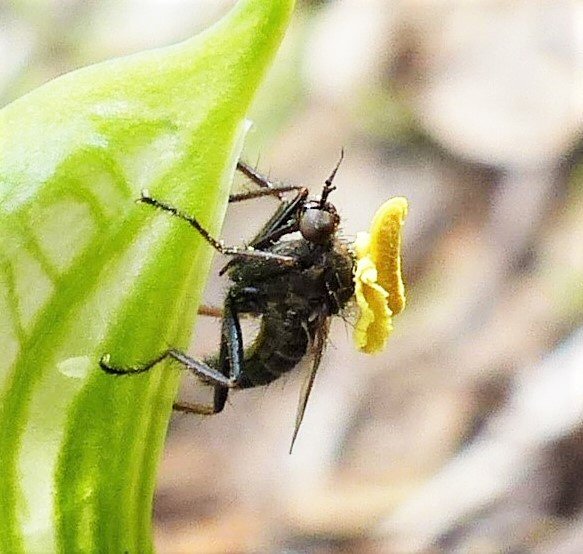 The photos were sent to Rudie who noted one of the pollinia was broken. He suggested this was from a previously visited flower and probably broke and fertilized the photographed flower with the fresh pollinia being added on exit on this occasion.

Follow-up confirmed the fertilization of the orchid see pic 3. 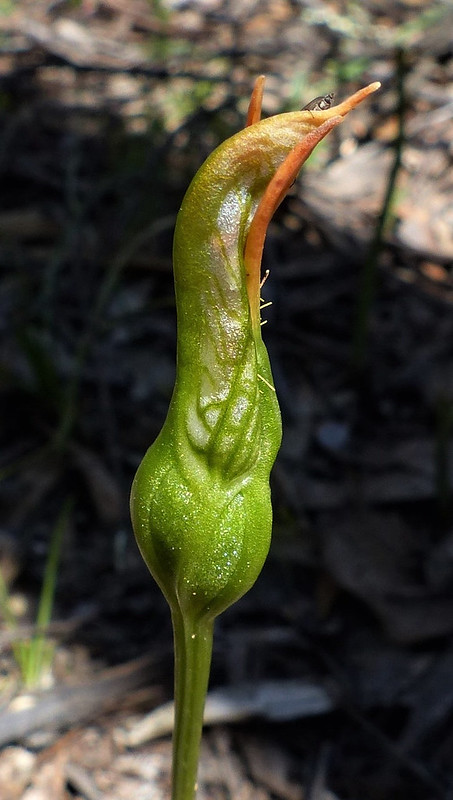 The insect was identified as the Dagger Fly (Empididae – Empis sp.) and follow-up observations by Rudie and his team at other sites confirmed this fly as the pollinator of the Bearded Greenhood. Until these sightings the pollinator of this orchid was unknown. Rudie has now published a paper with Neil’s photograph and an acknowledgement that reads “ We’d like to thank Neil Blair for providing the first photograph of a pollinator on Pterostylis plumosa.”

In turn we would like to thank Rudie and Mitch for coming to our AGM outing and meeting, and teaching us about orchid pollination. Without this knowledge and awareness the original observation may have gone unnoticed.

The grading program has finished with focus on higher use roads in the park.
Upgrading of minor tracks in the Chiltern section with bulldozer will continue whilst weather holds.
Fox baiting program in fire affected area has been completed and contractors should finish spraying bridal creeper in the next week.Concreting of pathway to viewing lookout at Woolshed Falls has been completed and works to improve the entrance road are due to start soon.
Removal of Mt Pilot Fire Tower has commenced and should be completed in the next few weeks. With removal of the tower it is planned to remove the access track to the summit and revegetate the area.
A car has been dumped and burnt out on the road to Mt Pilot.

Rather quiet on the weed front this month. Twenty or so briars on Grasslands, some boxthorn regrowth on Mountains Lane, four olives on Chinese Track, a couple of fruit trees on Little Pilot Rd. Still to check the inkweed on Old Cemetery Rd and woody weeds in Black Ball Reserve in Chiltern. We welcome any news of weeds spotted anywhere in the Park!

Thirty-two people attended the first Friends meeting at Bartley’s Block. Member Rex Fuge gave us the history of the Bartley family, the brewery and the immediate area. Afterwards all hands descended on the dreaded Caper Spurge. We are still fighting it in 2017 ! However there was no Vinca there is 1993, so where did it come from? After a well deserved morning tea, there was no bun in those days, Tony Marsh took us on a nest box trail. 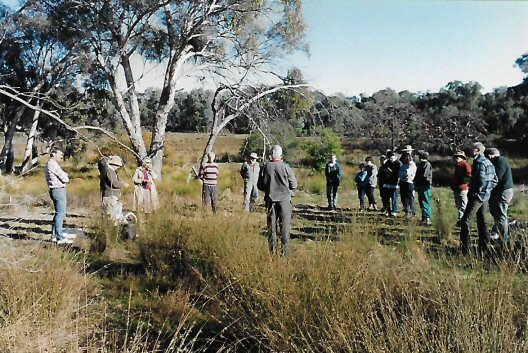 Back then we had film cameras so these photos are scanned from prints. How easy it is these days! 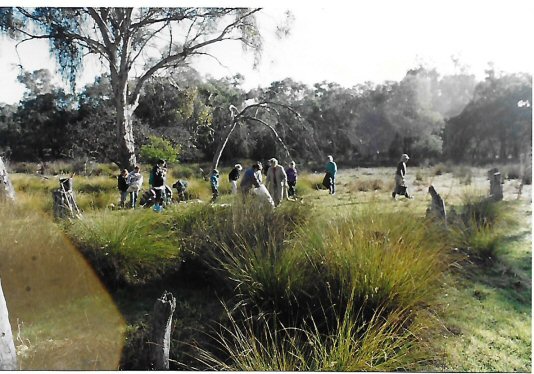 “Consider this: all the ants on the planet, taken together, have a biomass greater than that of humans. Ants have been incredibly industrious for millions of years. Yet their productiveness nourishes plants, animals, and soil. Human industry has been in full swing for little over a century, yet it has brought about a decline in almost every ecosystem on the planet. Nature doesn't have a design problem. People do.”
~ William McDonough, Michael Braungart

NEXT MEETING IS ON SATURDAY JULY 1ST

Meet at the Chiltern Post Office at 9am. BYO all your needs, lunch, binocs, repellant, chair.
The activity will be announced closer to the date. Field contact 0407 486 480

If you are a follower of the Friends of Chiltern Mt Pilot NP, on this website or Facebook, and feel you would like to support their activities you can do so, with a small donation, by becoming a Friends of Chiltern Mt Pilot National Park Member for $15 a year. Your support is a source of encouragement and helps fund the costs of materials for new and ongoing weed eradication, nest box, revegetation, threatened species and information programs.

We are a group of people (300 as at June 2017) who are interested in Chiltern Mt Pilot National Park in North-Eastern Victoria. People can find much more information on the Park, activities of the Friends and membership details at http://friendsofchiltern.org.au/