The day dawned a little overcast but soon turned into a glorious autumn morning for being in the bush. Twelve nest boxes were the target for the morning. One box was repaired and another which had mysteriously disappeared was replaced. Many boxes showed evidence of recent use but when we reached the last box we got a surprise. It contained a dead Sugar Glider, well decayed, so it was taken down for cleaning. As the lid was opened an animal popped out and then back into the box. Liz thought it was an Antechinus so we probed the leaves to make sure and on confirming it we emptied the box and the occupant scurried off. The box contents were none too pleasant but it is now clean and awaiting a new occupant. Over the fifteen years of box monitoring this is the first record of an Antechinus in residence. 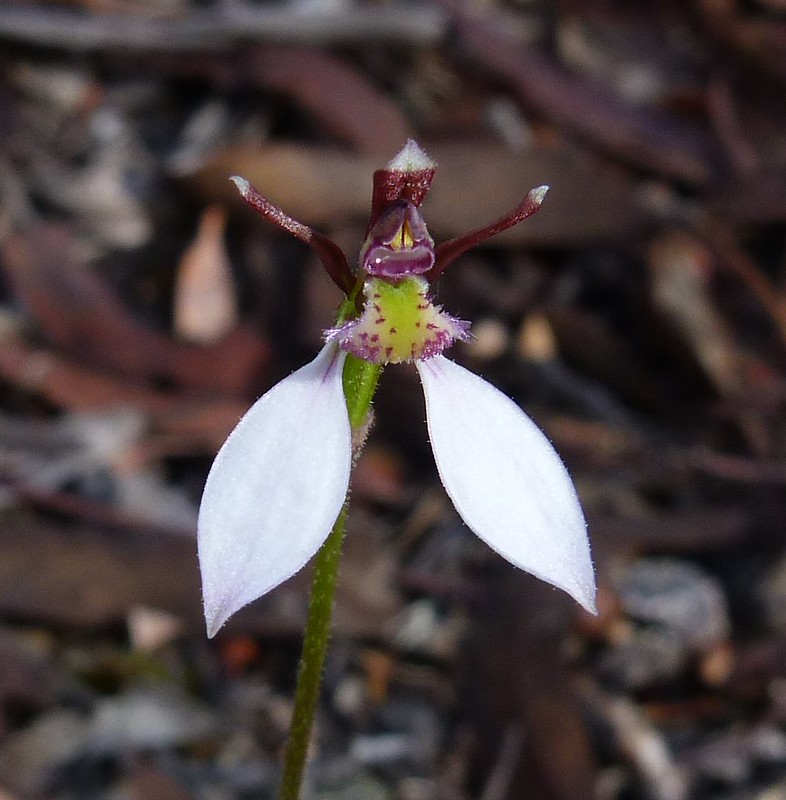 Most of the golden orb webs were now minus their spiders and rather bedraggled. The two species that weave those enormously strong golden webs are Nephila edulis and Nephila ornata, the smaller slender species is N edulis. 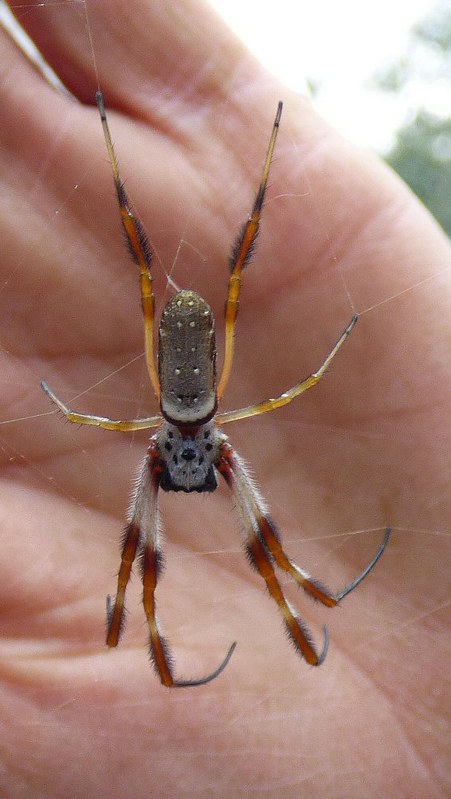 The big trek over, it was time to enjoy our traditional morning tea and bun in the sunshine.
Lunch was at Bartley’s Block where we enjoyed the gorgeous golden autumn colour on the old Persimmon Trees.
After lunch we attacked the explosion of Caper Spurge seedlings.

Eight of us were pulling and our total was well over 1,000 seedlings and the job is by no means finished. Thanks to everyone for a great day’s effort.

Friends received a surprise offer of $1000 from Parks Victoria for a project of our choice. Since we were planning to embark on a project to construct and erect Turquoise Parrot nest boxes at our expense we chose to spend this money on materials to construct fifty boxes.
We will use marine ply for it has proved its durability in our mammal boxes. Bill Boulton offered to make the boxes and as soon as we are ready to proceed we will have a production line in place. There will be a task for anyone wishing to help. Details later.

Guests of the Horehound

Despite being a noxious weed in Victoria the Horehound, *Marrubium vulgare, produced some interesting beetles infesting the plants at Bartley’s Block. Thanks to Neil’s patience these photos show the eggs, nymphs and adult. 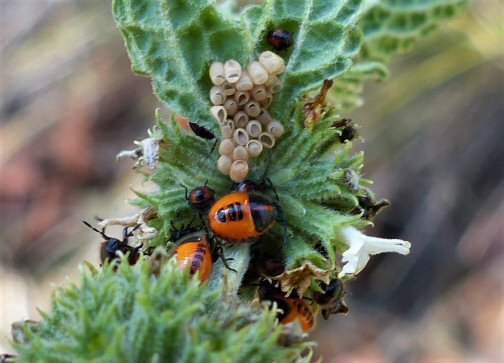 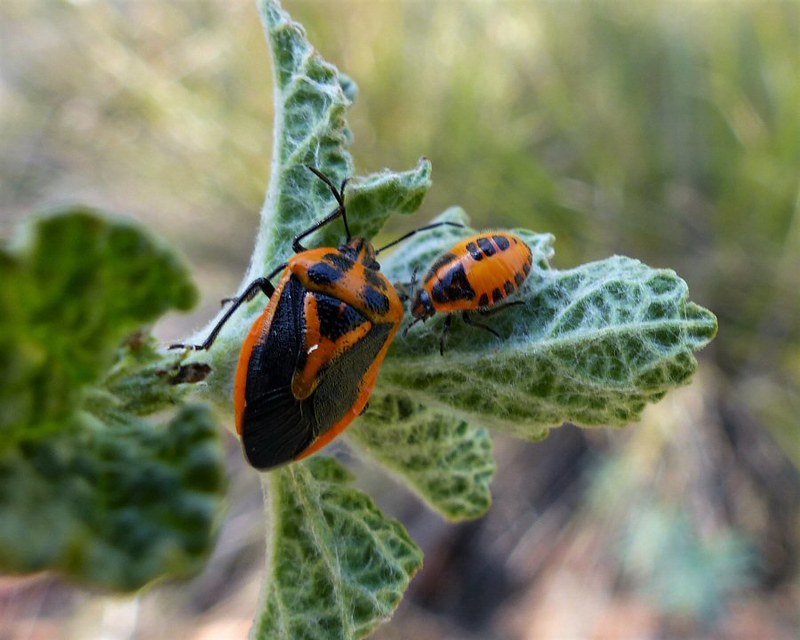 The Horehound Bug, Agonoscelis rutila, is a stink bug which sucks the sap of the plant causing wilting of new shoots. The bug has five nymphal stages of development and several can be seen in the images. Although they usually attack horehound, they may also swarm on a variety of other trees and shrubs. Horehound infests disturbed areas and this patch was on the old house site. The aromatic leaves are greyish and covered in white hairs. The leaves have a bitter taste and are shunned by stock. However the meat of animals forced to eat the plant has a tainted flavour. The fruits are burr-like and easily spread by animals. We will attempt to eradicate it from the house site.

On April 22nd at Tuan Campsite I found this creature on my car door. Obligingly it stayed while I took a hurried photo. Ken Harris, who is working on Lacewings, has written four articles on the various species in the Victorian Entomologist identified it as a Pied Lacewing genus and species Porismus strigatus., 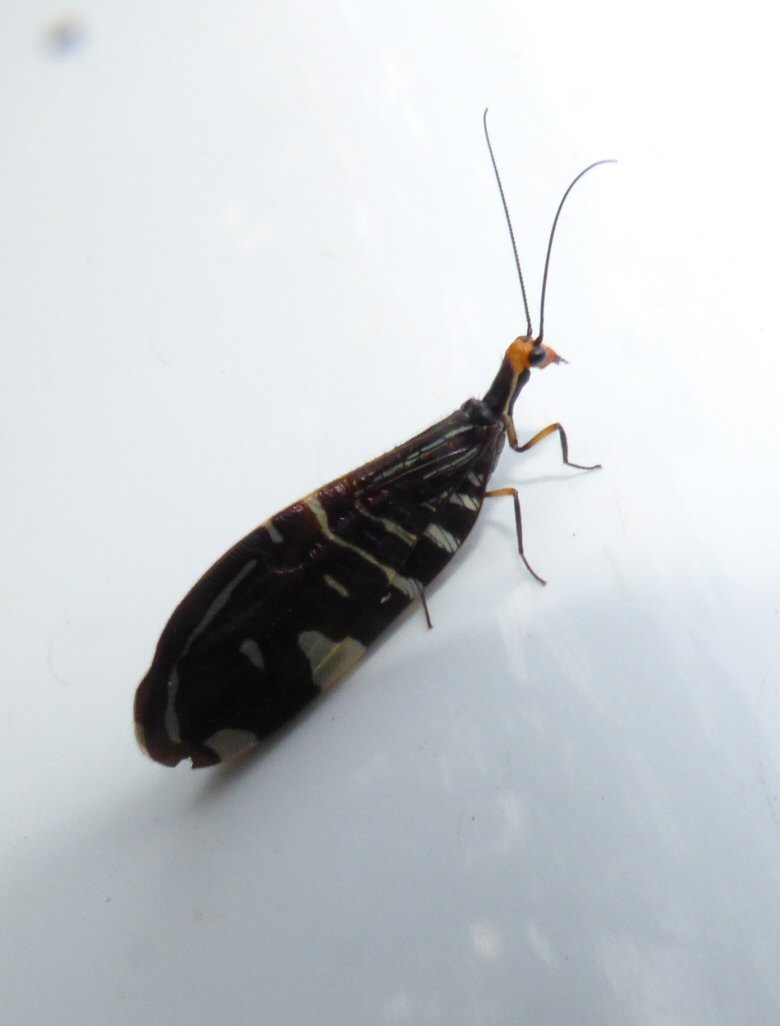 The predatory larvae of this species live under bark. The larvae of some other species of Lacewing dig conical pits in loose soil into which insects slide and become trapped. As they slide into the pit they are grabbed by the ant lion’s large jaws. What a cunning way to get one’s food.

Green lacewings are important predators of insect pests such as aphids and mites. Garden plants that attract green lacewing species include plants of the Asteraceae family, Cosmos, Dandelion and Sunflower. Other species feed on nectar and pollen. Please send me any Lacewing photos you might be lucky enough to get. 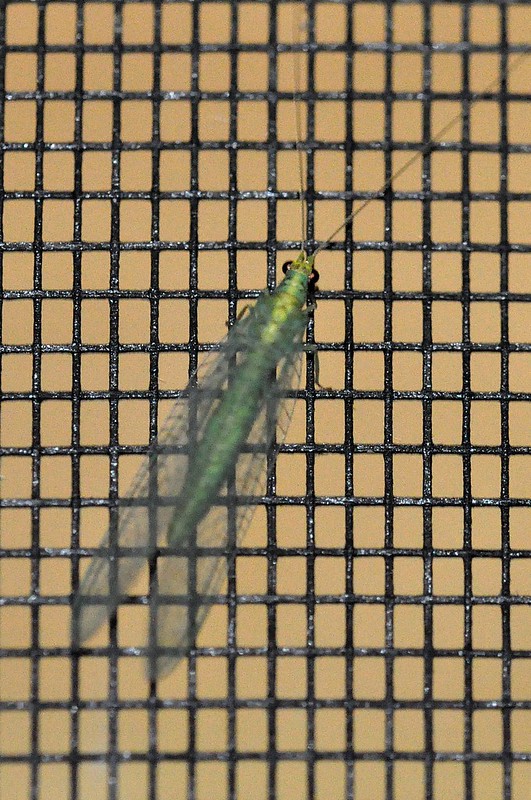 For more information on these insects see : www.insectary.com/portfolio-items/green-lacewing/

The rain has triggered the fungi and Jan found this large and uncommon species, Phylloporus clelandii in late April. One of its recognisable features is that when bruised, the yellow gills and stem turn green. The caps can be up to two hundred millimetres across. 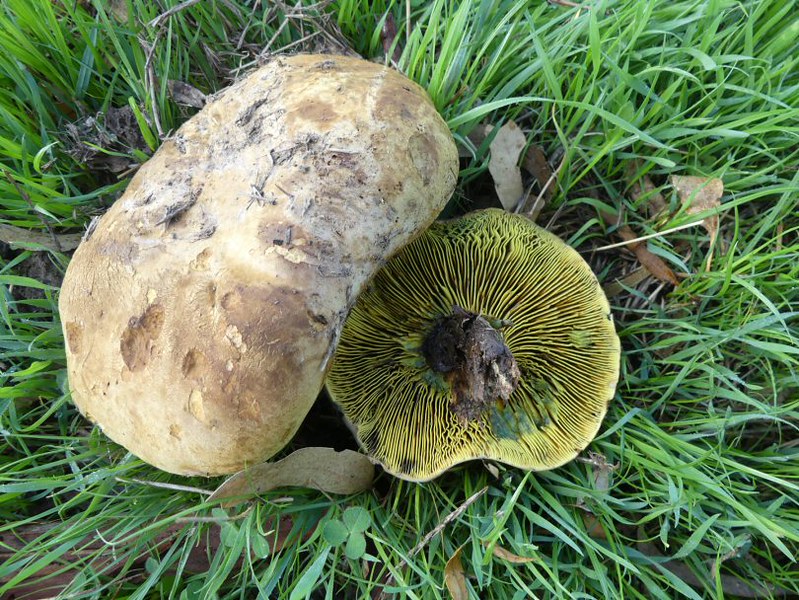 Planned burning program for this season has been completed. Two burns were undertaken in the Mt Pilot section at Greenbreak Track and Mulls Track near Eldorado.

Dozing of tracks is underway through Mt Pilot section and a grader will commence work in the next couple of weeks.

Roadside vegetation and overhanging tree removal is occurring through the Chiltern Section of the park.

Fox baiting in fire affected areas will continue until end of May.

Contractors have commenced work on spraying Bridal Creeper in Chiltern.

There are roaming Regents in the Barnawartha block on the south side of the park. Anyone wishing to assist with monitoring please contact Liz on 0417 312 592 for details of time and meeting place.

The advent of the cooler weather has brought the winter migrants to the park. Scarlet and Flame Robins and Jacky Winters are in the more open areas such as Bartley’s Block. Golden Whistlers, Crimson Rosellas and Gang Gangs are throughout the park. The Gang Gangs have been drinking regularly at the far end of Cyanide Dam. Summer migrants like the Rufous Whistler, Rufous Songlark and most of the Woodswallows have left us for warmer climes. 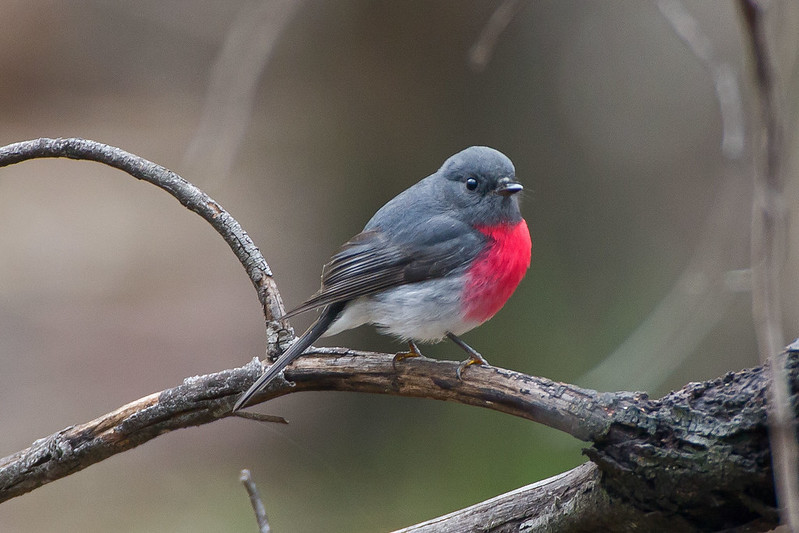 A Little Bee News From Karen

Native bee sightings have decreased markedly as the weather has cooled. Most species don't overwinter as adults, as it's too cold for them to fly or forage. Instead, they exist only in their immature forms, often as eggs or pre-pupae, within the cells the female bees have created and provisioned, waiting for the conditions to be right for their transition into adults in the warmer seasons. Therefore it is rare to see native bees locally during the coolest months.

A nesting aggregation of many Blue-Banded Bees I observed over the summer now has no action; I hope to reconnect with them and their antics when their next generation emerges in spring or summer. I'm still seeing the occasional Blue-Banded Bee in my garden, but even that will likely soon end.

I saw some late foraging and nesting by several species of leafcutter bees in April. As per their common name, these bees cut circles from leaves and use them to line their nest cells. They use cavities and holes for their nests, including in wood, human-made structures or the ground. 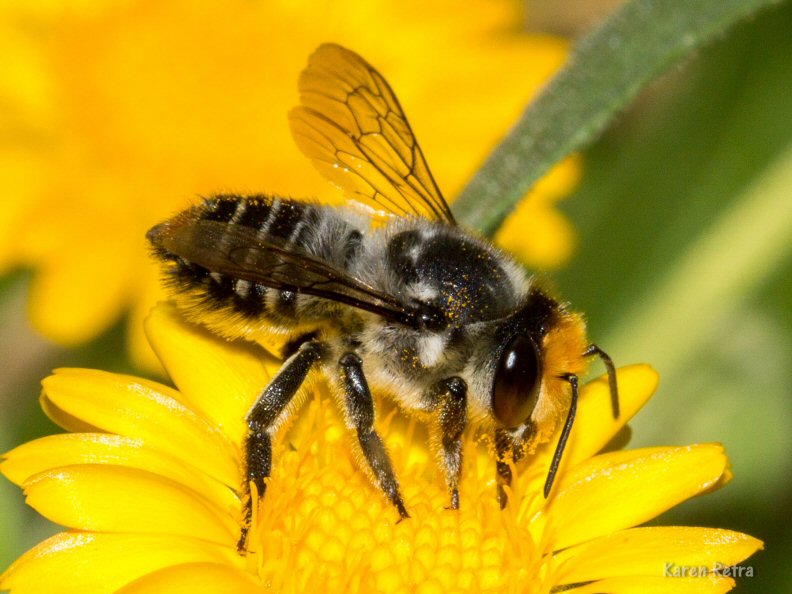 Several masked bees have also been active creating late nests, even in the last few days. These bees lack scopa (special hairs for carrying pollen), and this lack of hairiness often means they are mistaken to be wasps. These ones are around 8mm in length and were using holes approximately 5mm in diameter. They line their cells with a cellophane-like secretion which they spread over the surfaces with their mouthparts - it's intriguing to watch. 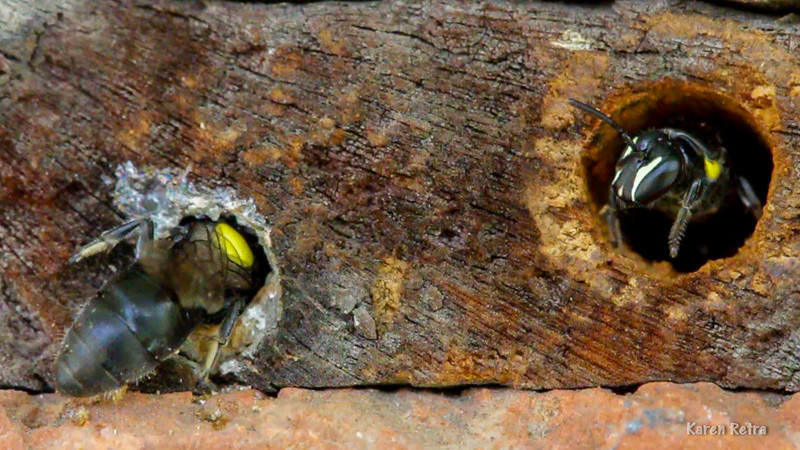 Click the photo above for a video that runs about 30 seconds. The same bees as in the photo - one bee works on her nest while the other bee looks outwards. Opens in a new tab or page - close it to return here.

A few briars poked their heads up on Grasslands and were dealt with. Boxthorns on Mountains Lane were also disposed of. Permission has been granted to start weed eradication on Barnawartha Scenic Reserve which encompasses Mt Lady Franklin. There are many large peppercorns, olives, figs and privet which offer good jobs for winter. People who may like to assist can contact Mick on 0429 017 229 Parks Victoria have sprayed large patches of blackberry.

Anyone spending time at Bartley’s Block may like to spend a few minutes pulling tiny Caper Spurge seedlings which are emerging in the bare area near the information box. Every fifteen minutes is a hel the aim is to prevent flowering and seeding.Web pic

Meet at the Chiltern Post Office at 9am. BYO all your needs, lunch, binocs, repellant, chair.
This month we will be working at the Rutherglen Natural Features Reserve. All the nest boxes will be checked and we will search for emerging olives and any other feral plants. Field contact 0407 486 480