Dear Friends,
April, and the weather was perfect! First task was to relocate two nest boxes along Depot Road. It was decided to trial one in our revegetation plot to see if any animals are using the site. The trees in the plots are now quite sizeable and the natural regeneration around the plots has grown well. A second box was added to the two already in the gully since there was evidence of both Tuans and Squirrel Gliders in the area. 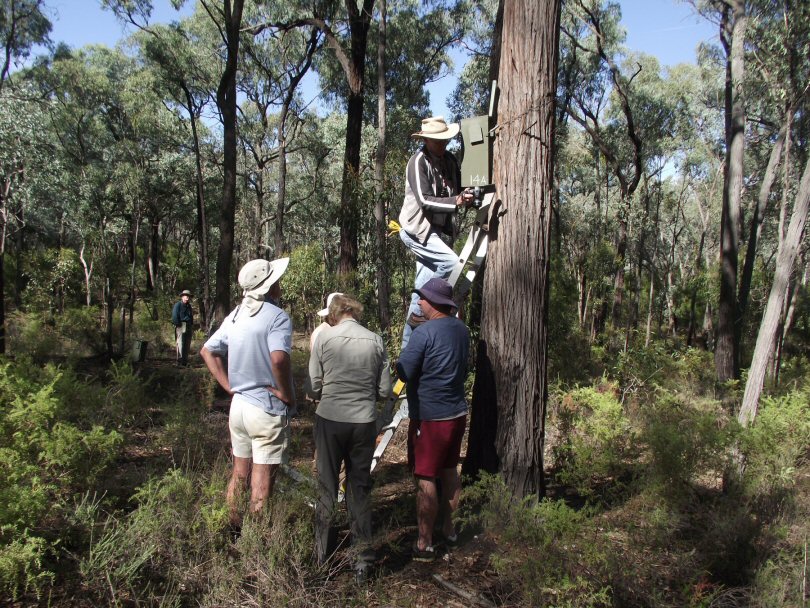 Morning tea was next before moving to Bartley’s Block to purge the Spurge which had germinated after the successful control of the Vinca. Horehound, Bridal Creeper and other weeds were sprayed around the old house site. Phillip recorded sixteen species of birds. Notable among them were Tree Martins, White-throated Treecreeper 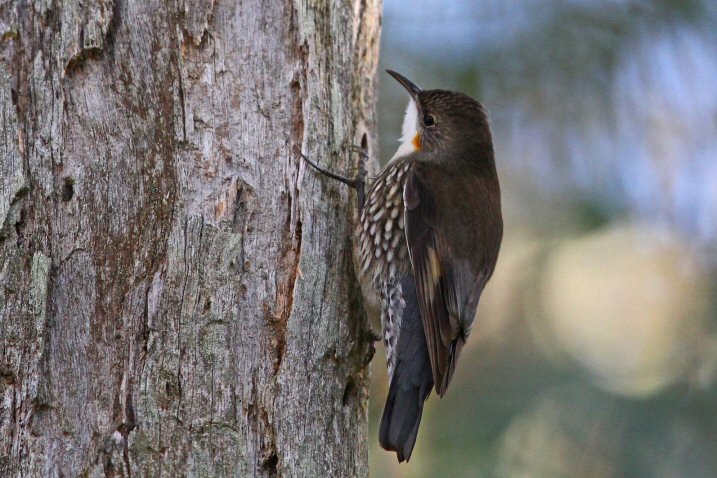 and White-browed Babbler. Common Brown butterflies were on the menu for Willie Wagtails and this one was captured with its meal by Jim Roelofe 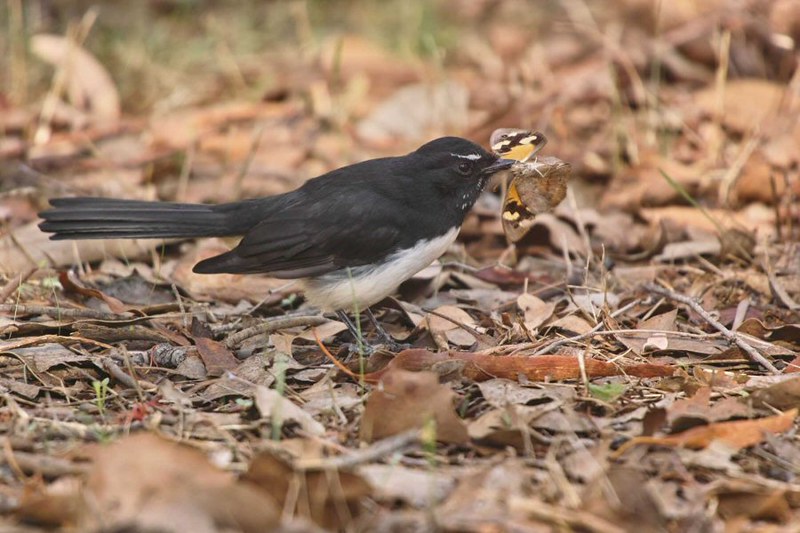 After lunching at the Pioneer Cemetery we went nest box checking. The first set of four was located on a dry ridge and all were unoccupied. The second set on the lower slope and among a good shrub layer yielded gliders in three of the boxes. Of the ten boxes inspected five were occupied, a very satsifying result. Dodging the tough massive webs of the Golden Orb Web Spiders was a challenge. Neil found a web full of spiderlings and their egg sacs. Unfortunately we cannot identify them. 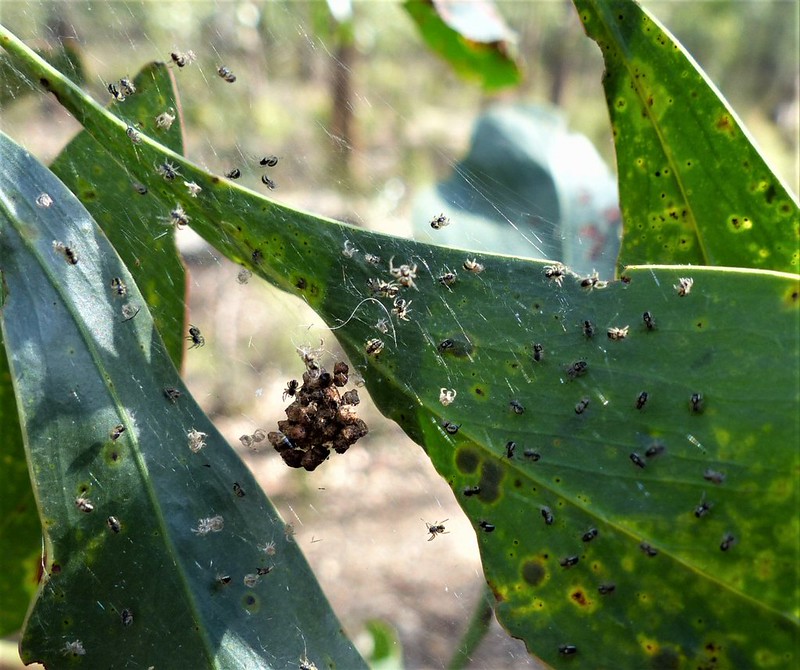 March Flies in abundance: During March these large and noisy biting flies were numerous and living up to their name. They are members of the Tabanidae family. March flies are greyish in colour and have large greenish eyes. They have unusual feeding habits which are quite different for each sex. The biting sex in most species is the female feeding on the blood of animals and humans to nourish her eggs and delivering a nasty sting in the process. The males, amazingly feed on nectar! Maybe a plus for them is that they also act as accidental pollinators. 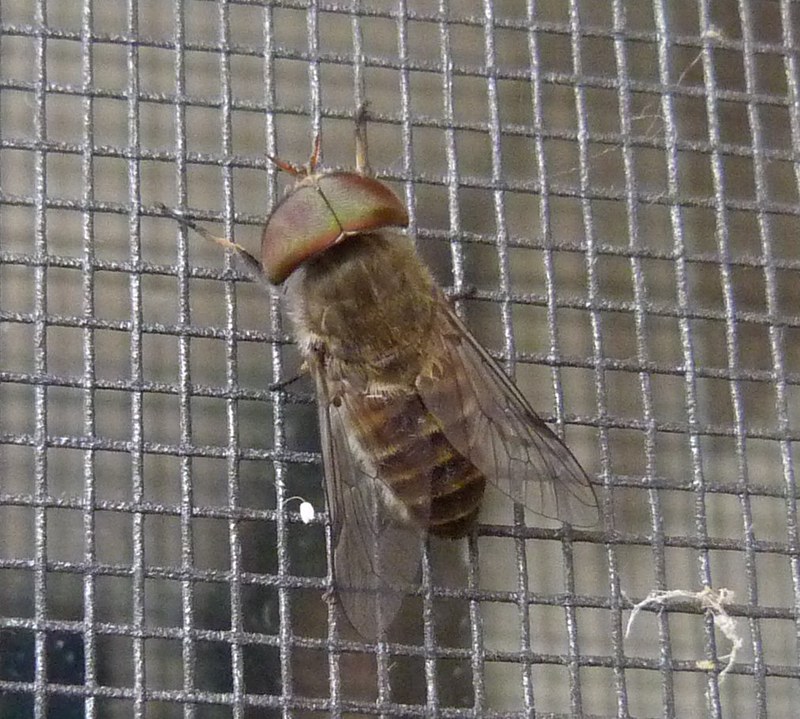 An Oasis in a Dry Park

An early morning visit to Davitt’s Swamp and the surrounding oasis of green was a rewarding way to spend a few hours. 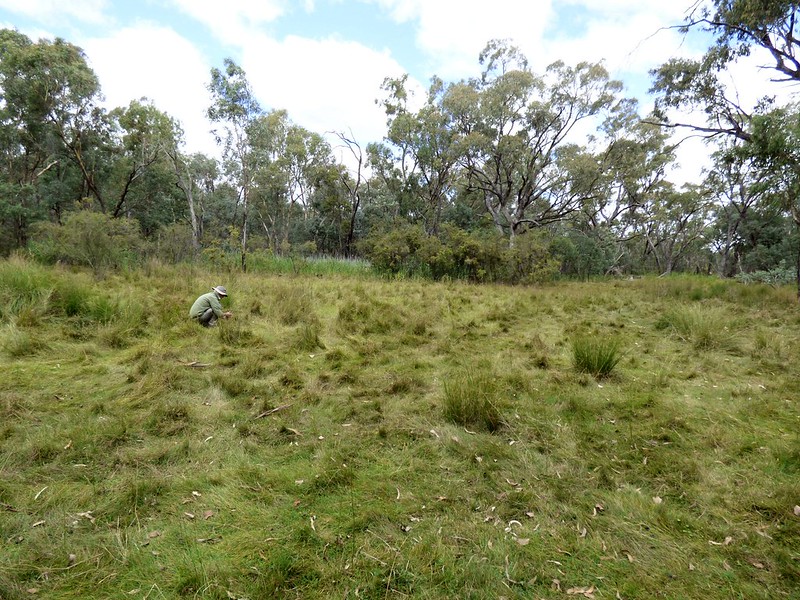 First Neil and I enjoyed coffee and a snack while watching a pair of noisy White-necked Herons flying from tree to tree around the dam. No doubt they were displeased with our presence. The edges of the dam were quite wet, soggy in fact, and perfect habitat for tiny sedges, dainty blue flowers of Swamp Isotome, Common Woodruff, 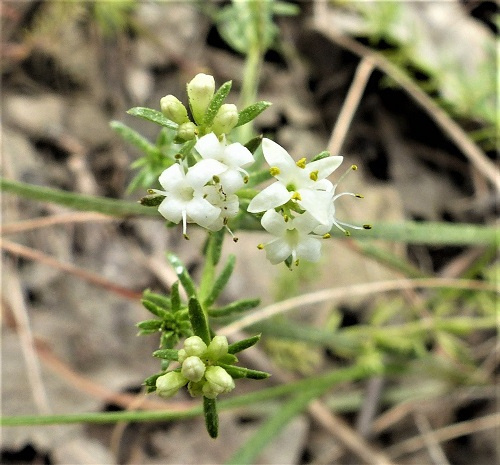 Globe Kyllinga and many other treasures. 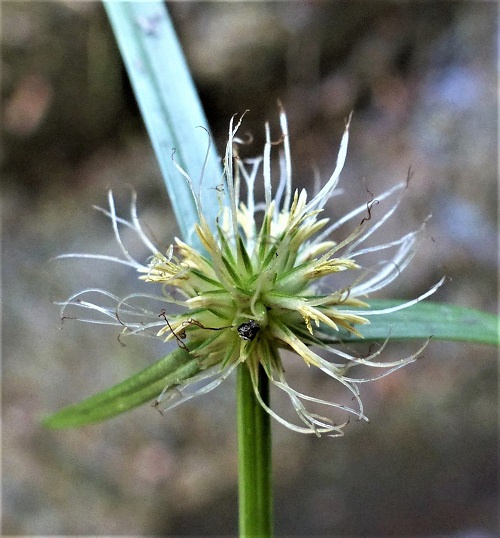 Since it was early and quite cool we could safely plod through the Cumbungi and Tea Tree thicket to the grassy area knowing that we were safe from snakes. In the grassy surrounds Chocolate Lilies were abundant and it was in this area that a Goodenia species caught our eye and puzzled us. It turned out to be Goodenia gracilis a species not listed for the park. Other unusual plants less abundant in the grassy surrounds included Stellaria angustifolia, Swamp Starwort, Veronica gracilis, Slender Speedwell and Mentha diemenica, Slender Mint and Austral Brooklime Gratiola peruviana 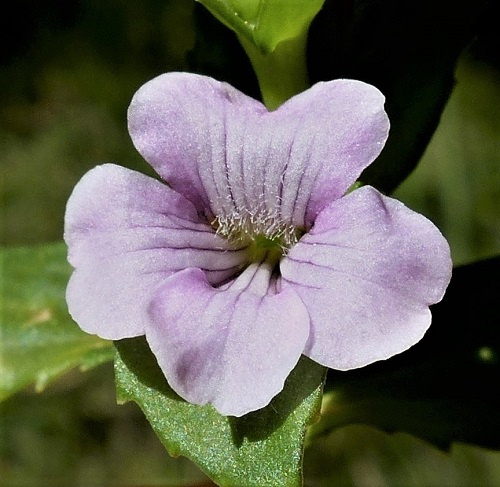 There was plenty of croaking after the deluge of rain. Jan captured this great photo of a calling Spotted Marsh Frog, Limnodynastes tasmaniensis. 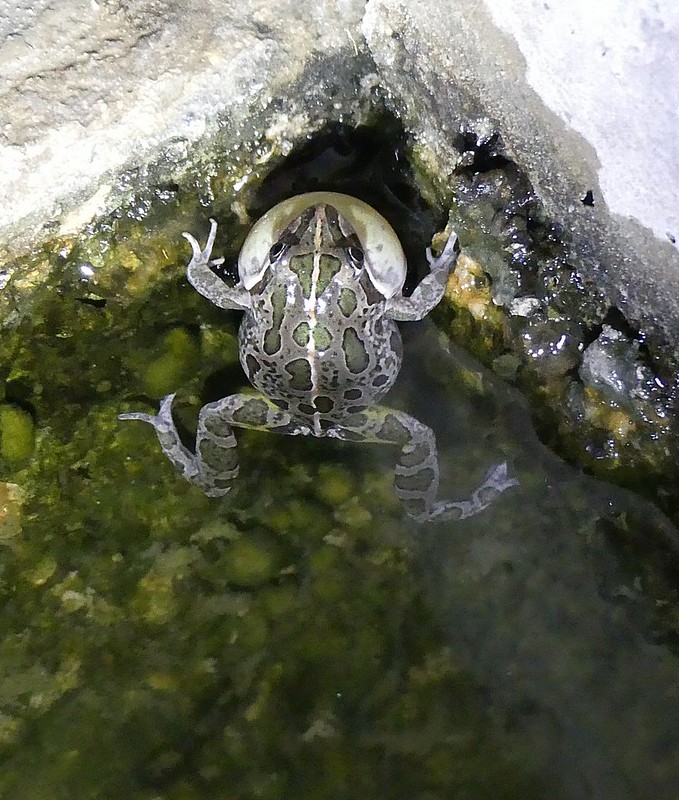 It is quite a common frog and is often found in dry periods sheltering under rocks. The large blotchy pattern on its back often has an orange or yellow stripe running down the middle.The common call of this frog is a sharp repeated “kuk-kuk-kuk”. Another very common frog is Peron’s Tree Frog, Litoria peroni this little frog, with a cackling call is an agile climber and is easily be distinguished by its crossed pupil and the pads on its toes. 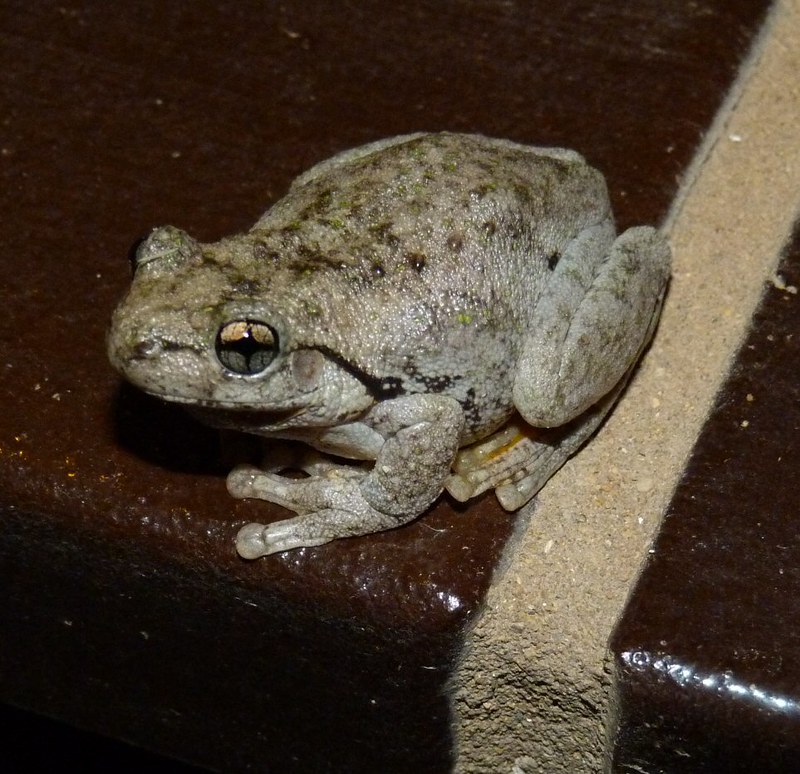 The emerging Vinca at Bartley’s block has been sprayed by Jan and will be re-sprayed in spring to catch any regrowth. So often after the removal of an area of weed one can expect another challenge and it has arrived! Every dormant seed of Caper Spurge that was lurking below the Vinca thatch germinated. 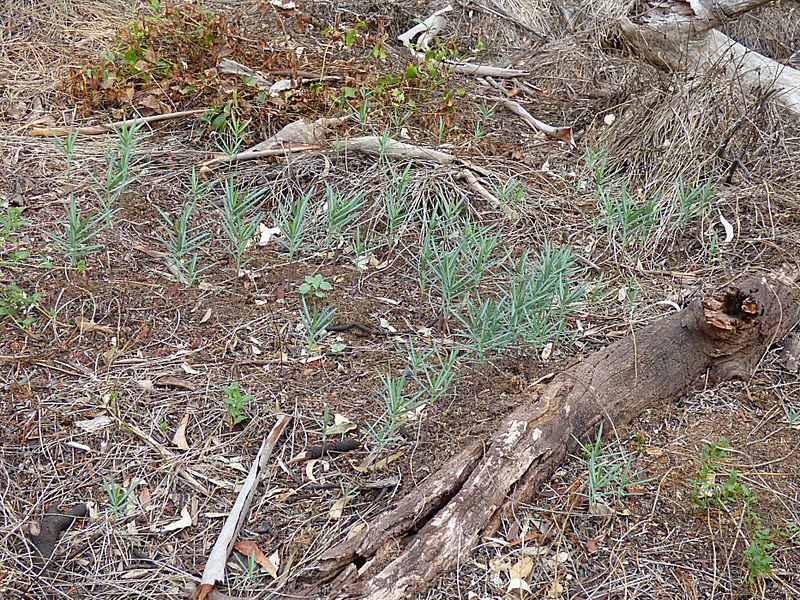 The release for 2017 will be in mid April. The training day for volunteers was held on March 25th at Honeyeater Picnic area.

Next Monthly Meeting Saturday May 6

Meet at the Chiltern Post Office at 9am. BYO all your needs, lunch, binocs, sunscreen, repellant, chair andof course energy!
Details of the activity will be sent nearer to the date. Field contact 0407 486 480