The weather is keeping warm and dry and as one member put it, energy sapping. However it did not deter seventeen of us from nest box inspections and while in the process dodging the huge and tough webs of the Orb Weavers. 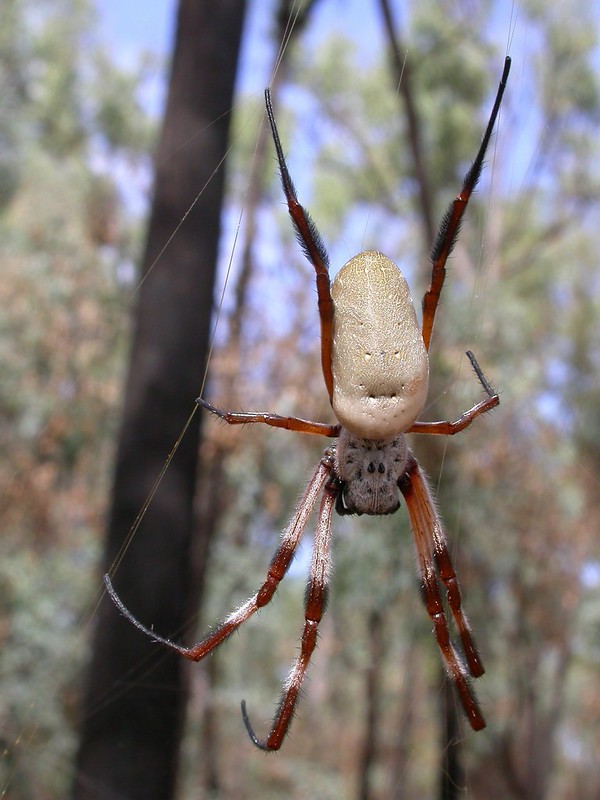 Things were looking pretty quiet until the very last box produced some Sugar Gliders. One very old dilapidated box from a previous research project housed a Ringtail Possum which suggests a shortage of suitable hollows.
Morning tea was more than welcome after the long trek.
Before setting off for the next session we examined the contents of the box that Mick had removed from another site. This box had the skeletons of dead babies in it. 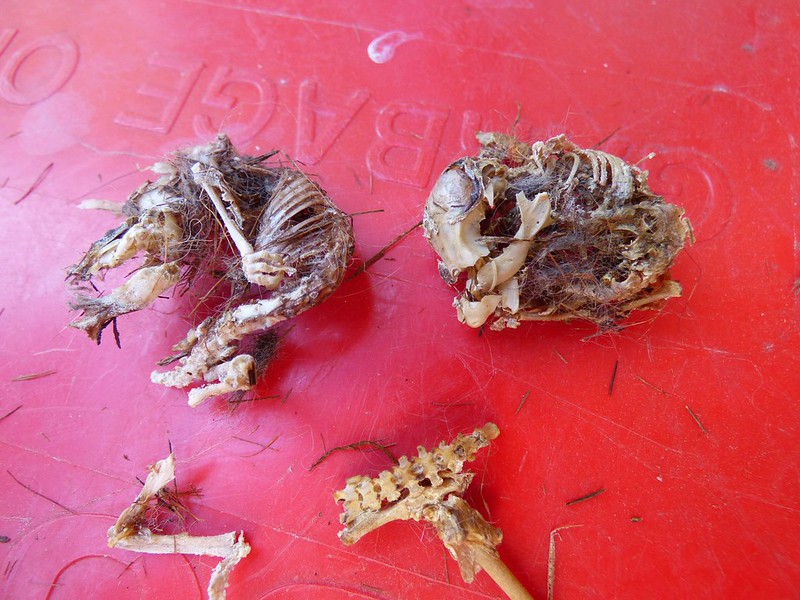 To our amazement it was packed full of stringybark, fur and decayed leaves so was obviously an old Tuan nest. Sadly the contents did not shed any further light on the identity of the dead. It has been cleaned out and re-erected.

Having been refreshed we undertook a survey of the area between Donchi Hill Rd and Lappins Track looking for olives, Cootamundra Wattles or anything else feral. The outcome was good, one sizeable olive and fourteen smaller ones were removed.
Lunch was enjoyed at Lappins Dam. There is some Grey Box in flower around that area but no birds were seen in the blossom. Around the dam we noted White-faced Heron, Little Pied Cormorant, Teal and Black Duck, White-throated Treecreeper, Willie Wagtail and overhead were Welcome Swallows and Rainbow Birds. 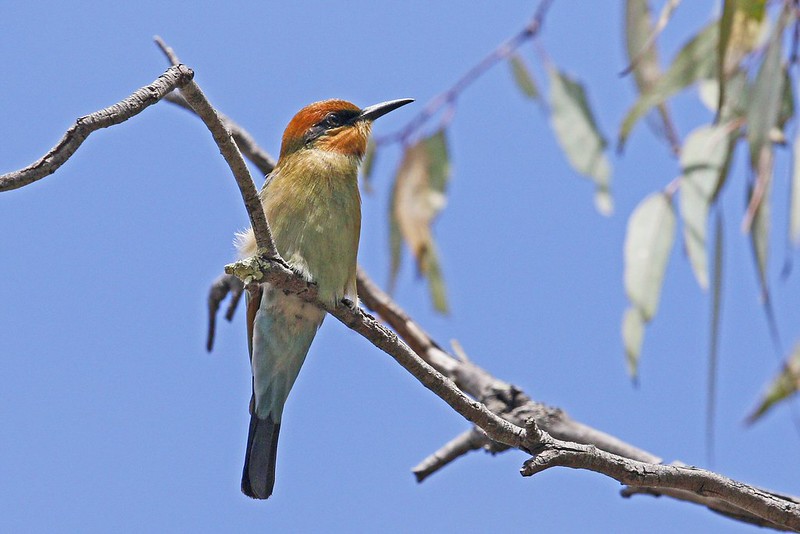 In the Ironbark areas on the ridges the flowering Mistletoe is attracting Little Friarbirds, 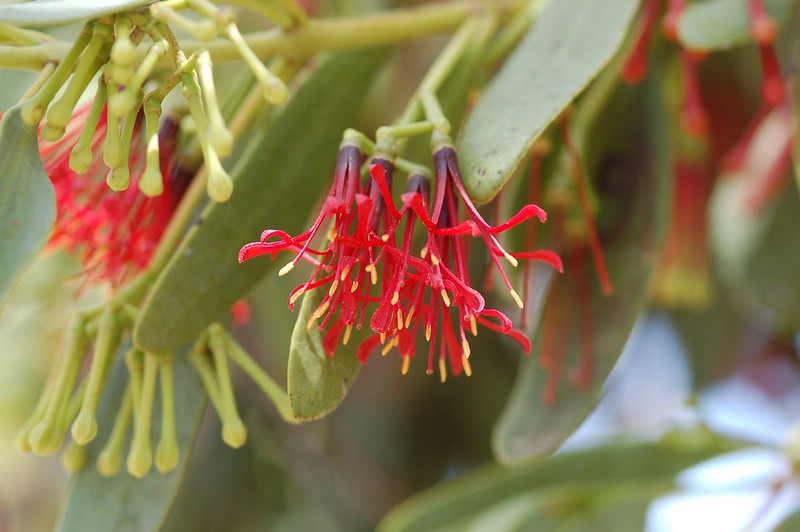 as well as Brown-headed and Black-chinned Honeyeaters. 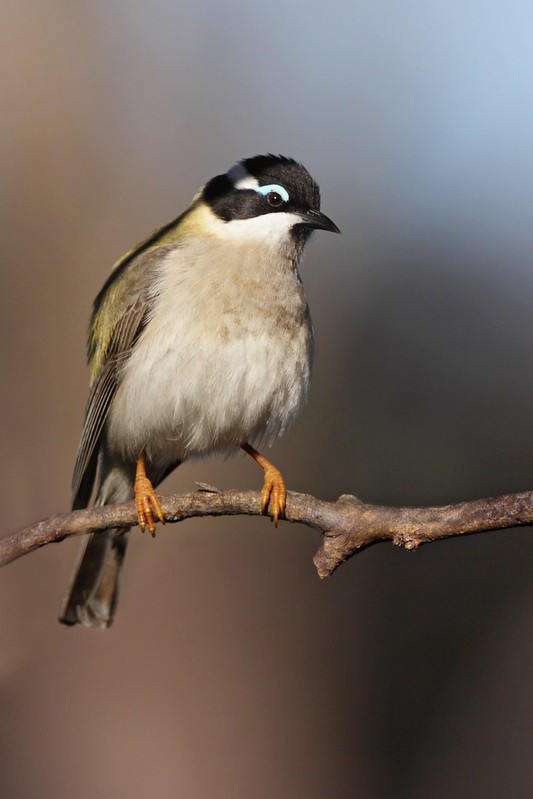 A Wedge-tailed Eagle was also recorded.

Jan found these galls on a straggling eucalypt.Thanks to gall specialist Rosalind Blanche we were able to find out what bug was responsible for them. The fresh pink tubular gall is induced by a female Apiomorpha munita sp while the male induces the spectacular “arms” form. Apiomorpha sp are all restricted to eucalypts. A. munita (or the complex) is the only species that develops spectacular 'arms' on the gall. Both the forms can be seen in the photo although the “arms” are rather dried.. 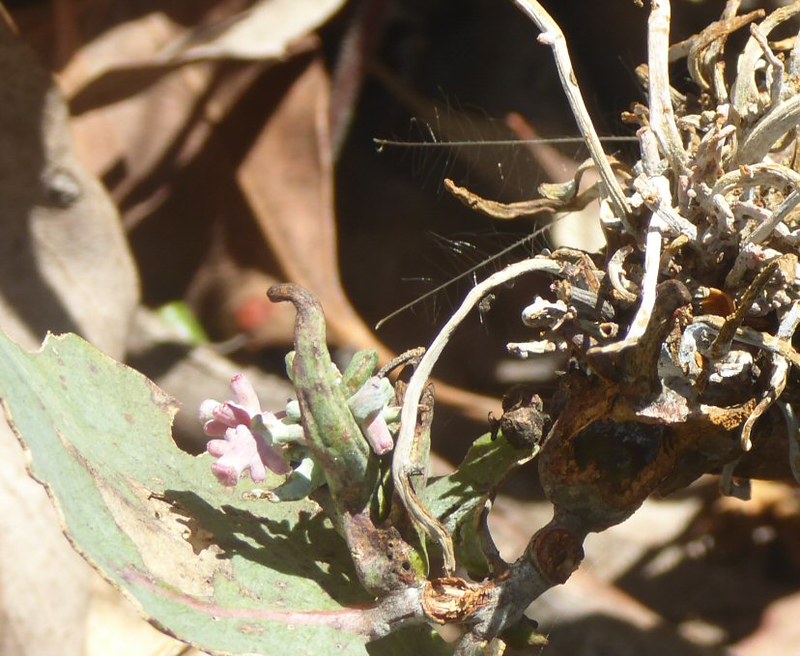 On inspection one box revealed a Squirrel Glider sleeping on packed debris along with some fresh leaves. In one corner of the box there were a few small bones. Next day the box was revisited with the aim of retrieving the bones.The glider had moved on. Mick found two skeletons of young animals. The box was removed to see if there was any other material that may give a clue to the identity of the dead. Unfortunately the jaw sections of both  skulls had disintegrated. All we could find was a single jaw part with a small grinding tooth. The jaw tip was missing but we think the skeletons are of  glider babies. It seems the mother animal had encountered a predator. 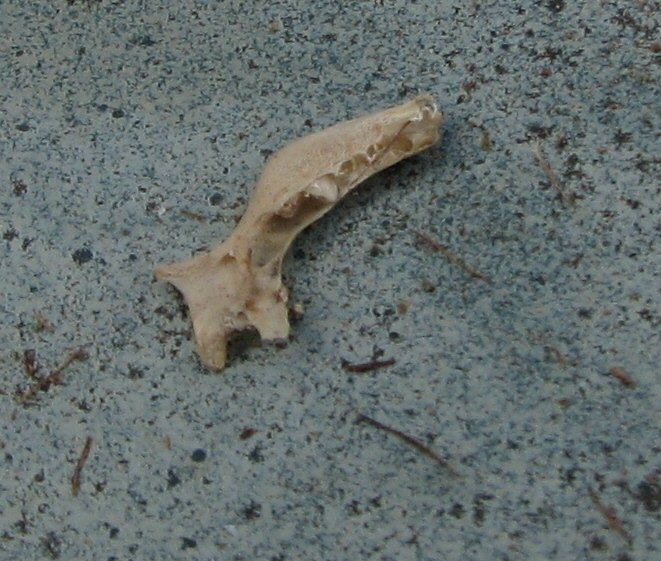 Caterpillars on the move

This striking bright green caterpillar of the Vine Hawk Moth , Hippotion celerio, is perfectly camouflaged on the green vine leaves. 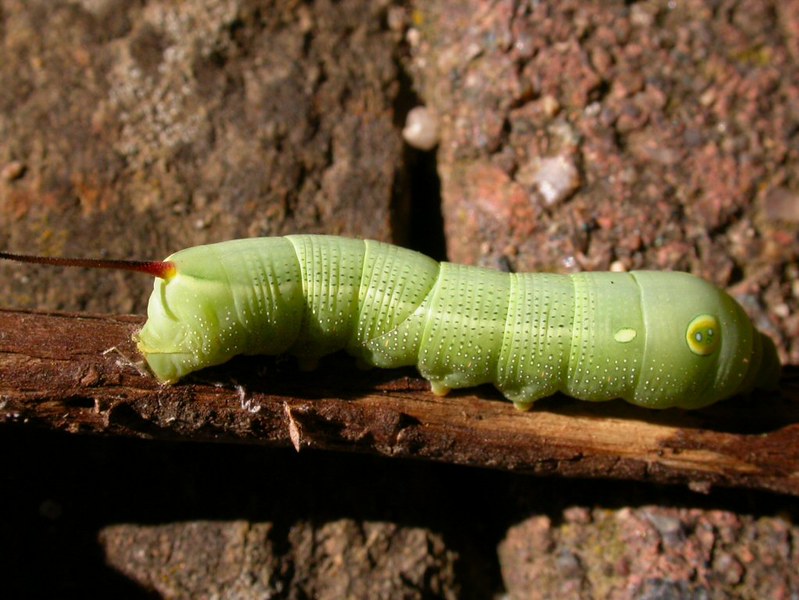 It is easily recognised by its bright colour, its tail horn and large eye spots suggesting “ eat me if you dare”. When ready to pupate it turns a brownish colour and drops to the ground to pupate in the soil. I found this one which had strayed onto a tiled area. I gathered it up and placed it in soil. After fifteen minutes it had spun its cocoon in the soil. 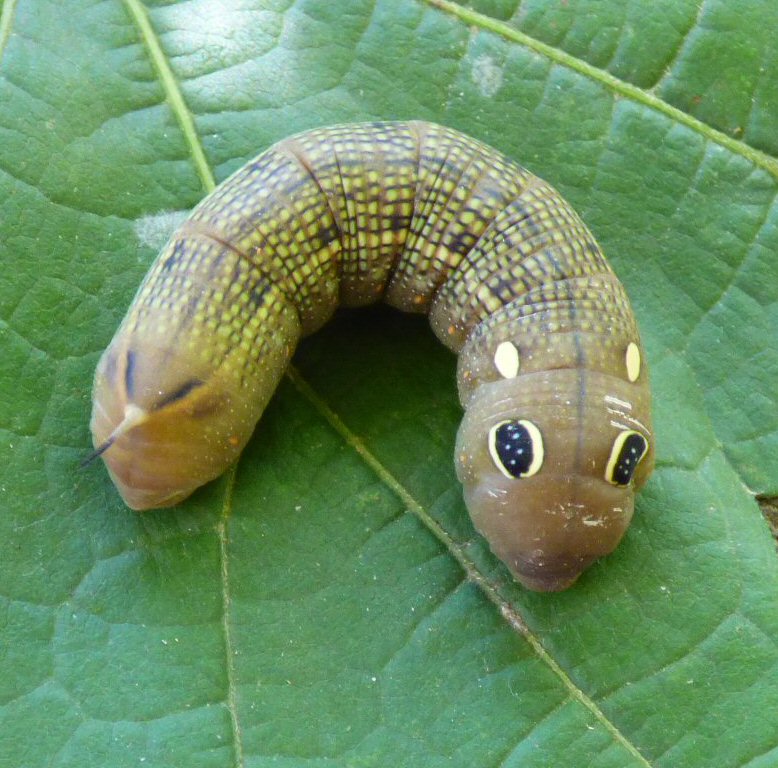 On hatching the moth feeds on nectar by hovering over flowers and extending its proboscis to suck up the nectar. 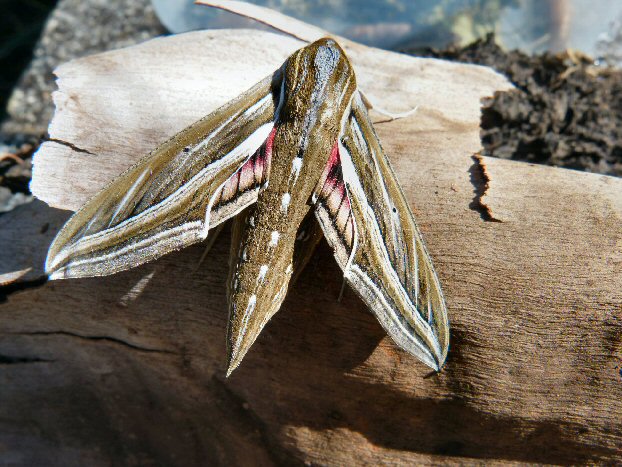 Simon has recorded Barking Owls at several sites along the Black Dog Creek in Chiltern Valley.

I was reading through the March 1982 edition of Wildlife Australia and I came across a story from a Western Australian photographer Ian Edgar. Ian made visits to schools to promote natural history. He showed this photo of nesting Red-capped Robins to a group of children and offered a prize of $2 for the best answer to this question : “What is Father Robin saying to Mrs Robin?”
The winning answer was : “You’d better get your grubs from the far east paddock as it is the only one that has not been sprayed with poison!” 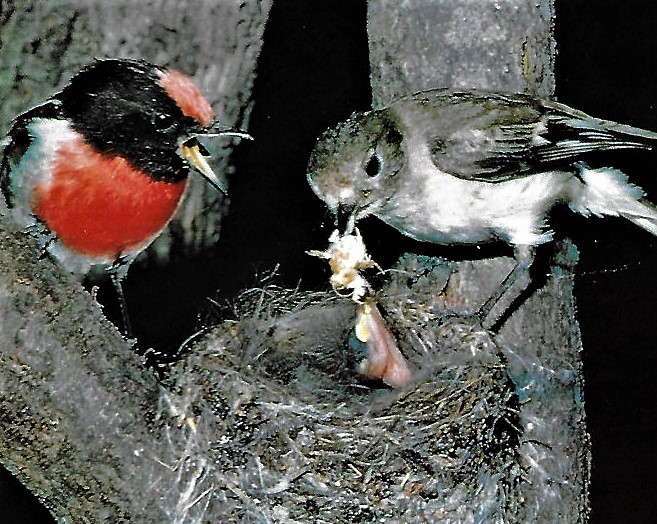 That was thirty-five yeas ago so imagine the increase in farmed land and herbicide use since then. The message is?

Weed notes from Mick and Tony

A few small briars  in Grasslands and olives, blackberries and peppercorns in Ochtertyre Nature Reserve were treated in February. Upcoming jobs include African Boxthorn regrowth on Devonshire and Mountains Lane, briars and olives at Rutherglen Natural Features Reserve, and some inkweed regrowth on Old Cemetery Rd. And probably more!

52 have been checked in the last month north of the highway with twelve  having residents, about 50/50 sugar and squirrel gliders. Anyone interested in helping to check boxes in the next month can contact Mick on 0429 017 229

The small replanting of Banksia marginatas on Wardens Lane has survived the summer well with two waterings and should now survive on their own.

Fox baiting in fire affected area will commence again on 13th March and continue for two months.
Planned burning will commence as soon as conditions are suitable. It is too dry at the moment.
Burns are planned for areas near Cyanide Road in Chiltern section and Greenbreak and Mulls Tracks in Mt Pilot section.
Tree risk removal, track maintenance and flood damage repairs have been completed at Woolshed Falls.

The release for 2017 will be in mid April. The training day for volunteers will be on March 25th at Honeyeater Picnic area.

Meet at the Chiltern Post Office at 9am. BYO all your needs, lunch, binocs, sunscreen, repellant, chair andof course energy!
Details of the activity will be sent nearer to the date.
Field contact 0407 486 480