Welcome to 2017. As I write this the mercury shows 43 degrees at 1pm. Fortunately the weather for our activity day on February 5th was acceptable after the heatwave of the previous week. Our working group of thirteen looked at the horrible, but pleasing, stretch of dead Vinca at Bartley’s Block and wondered where to start. Armed with rakes and loppers the patch was tackled in sections and it did not take long to make an impact. The clearing of the dead material exposed the sneaky new growth hiding below it. Since we had 20mm of rain over the following three days the new growth patches will no doubt increase. Jan has plans for that lot!

More Caper Spurge was removed and no doubt some will appear in the newly cleared area. It will be easily dealt with.
It was pleasing to see that many of the Sedge Tussocks have new growth in their centres. 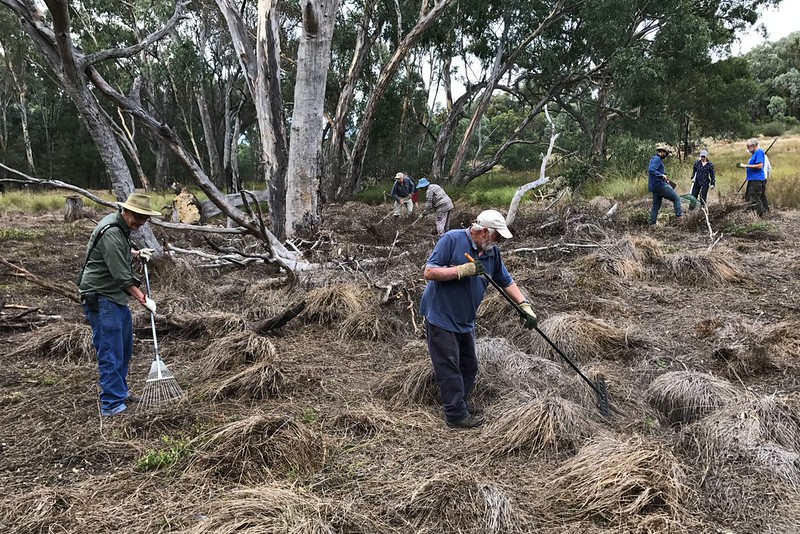 Beneath the thatch of Vinca lay an old well. It was made of very rough materials and possibly created to serve the house during its occupation by army personnel in the war. It bears no resemblance to the other two beautiful brick wells. 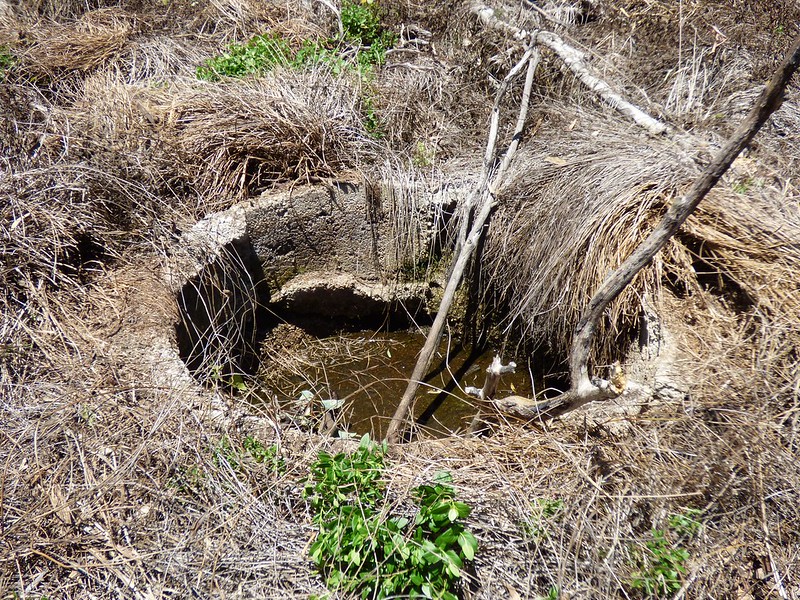 After a well earned morning tea and chat we moved on the “Pit of Hell” otherwise known as the Agave hole.
Here we took a different approach to the weed. Forks and hands were used to loosen the soil and expose the young Agave plants, being as careful as possible not to break the underground stems. All the plants we bagged and removed.
In the hole the big plants that had survived the initial onslaught were hacked and treated with herbicide. Mick and Steve tackled this job. The site will require ongoing inspection to remove any stragglers. We made a sweep of the site across the road and found a few small plants. There was no evidence of any Genista on the nearby site which pleased us as it was some fifteen years ago when that site was first cleared of a massive thicket. Plants of the pea family seed copiously and the seeds persist in the soil for years. 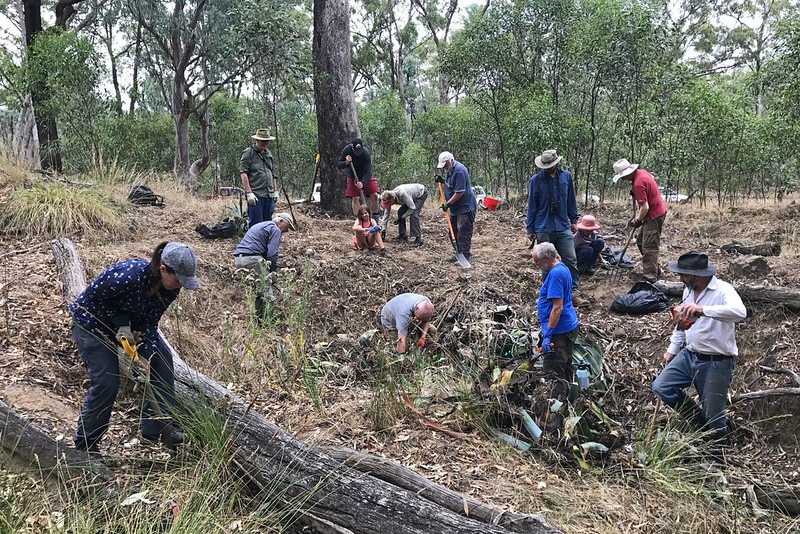 Lunch was enjoyed at the Indigo Goldfields Cemetery to the calls of honeyeaters including a few Noisy Friarbirds which were feeding in the Mistletoe flowers. One amazing find was a beehive on a low hanging branch of Golden Wattle, the honeycomb quite visible and the bees very busy. After the 20mm of rain and two days I went back to inspect it thinking it may not have survived but it was just the same and the bees were very busy. 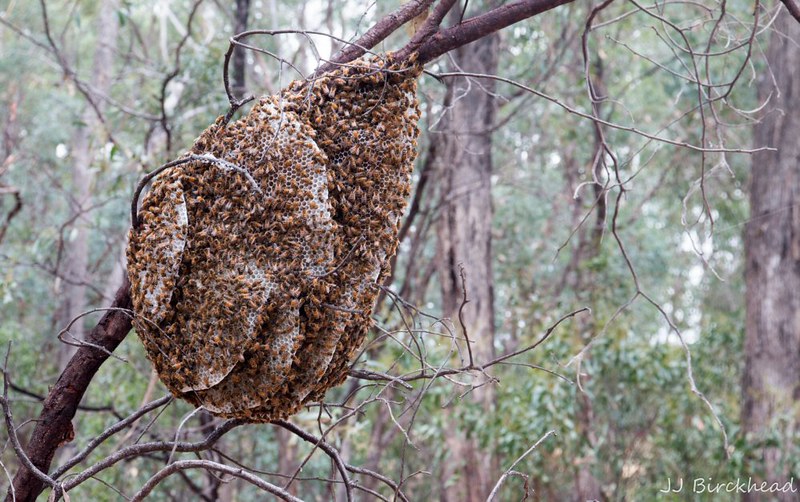 Birds and Animals of the Week

Neville has been out and about and has captured an endearing photo of a family of tiny, young blue wrens being fed by a rather stressed looking male. The Night Herons have bred at Valley No 2 and this one was not too good at hiding. 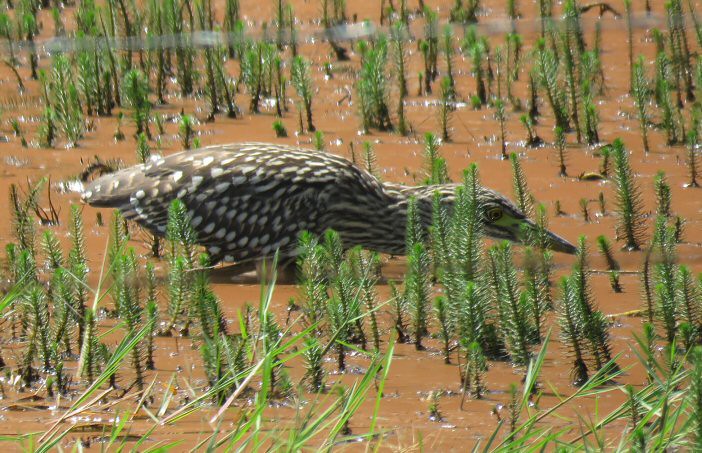 Honeyeater Picnic area so often turns up gems and this time it was our lovely White Wallaby and a curious Black Wallaby among the Sedges. Thankyou for sharing these lovely images Neville. 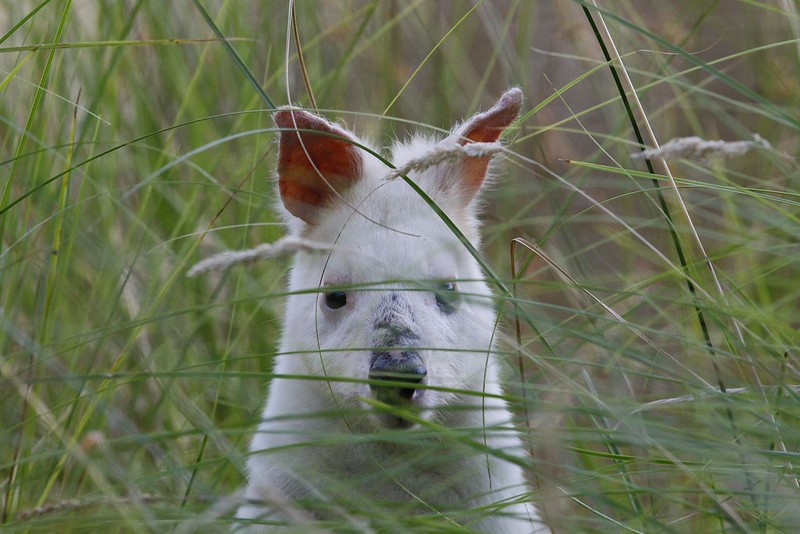 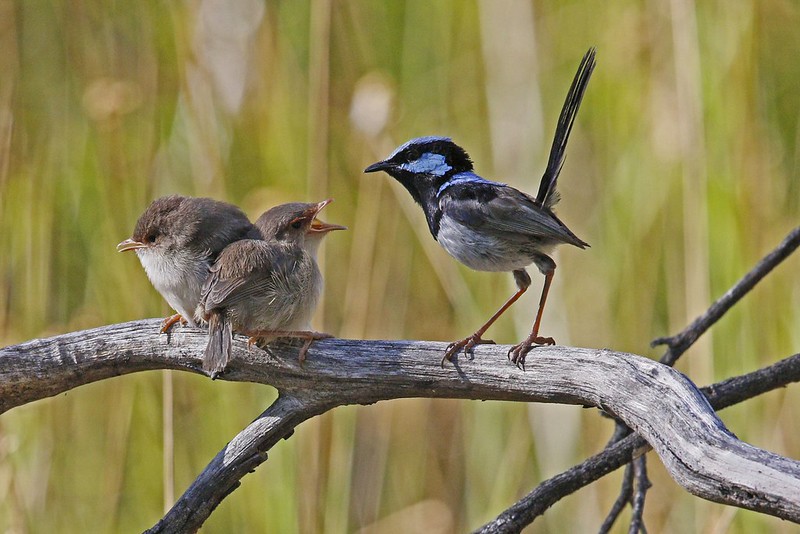 Jan’s interest in the Hairstreak Butterflies continues. Here is an extract of her excited email report to me:
Biggest find is a HUGE colony of Imperial Hairstreaks on a dense Acacia dealbata regrowth. Counted 70 trees with larvae or pupae scrums on them and there'd be many more than that. The female pupae are hatching and by 9.30 am Saturday there were pairs of mating butterflies everywhere. Went an hour earlier yesterday and witnessed the butterflies emerging and mating before their wings had unfolded. Literally hundreds of butterflies flying in a silver cloud!! Exciting. I asked for more information and Jan provided this account:
Jalmenus evagoras pupae form clusters on the stems of Acacia dealbata. Larvae and pupae are both defended by attendant ants which in return receive honey dew rich in sugars and amino acids. When a butterfly is about to emerge the pupae gives off a pheromone which attracts a scrum of male butterflies. As soon as a female butterfly is free of the pupal case, mating takes place. 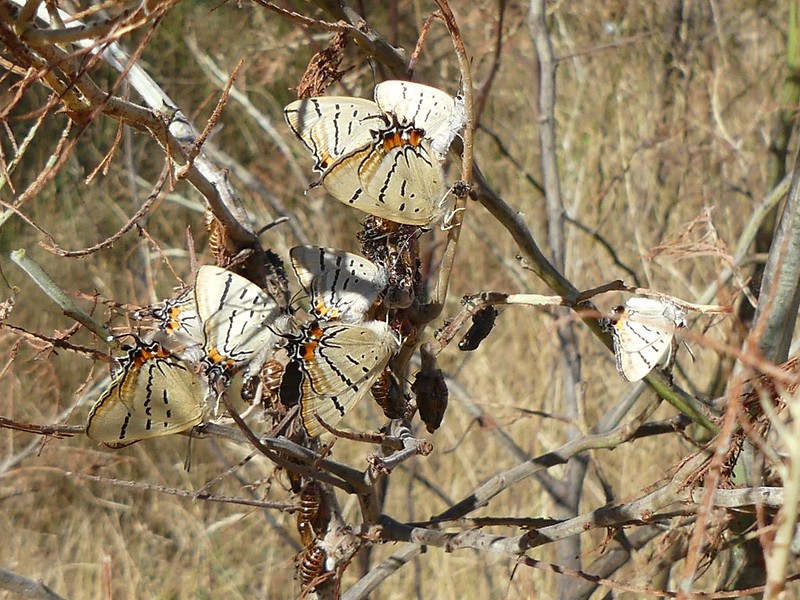 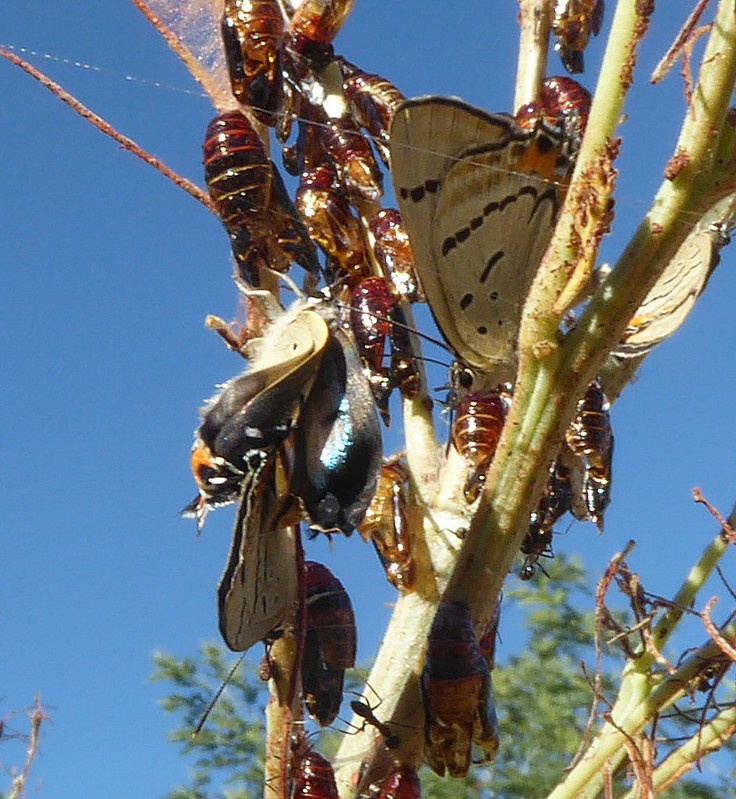 Bee flies are large, fat, and hairy, often with a long, rigid proboscis. They are excellent mimics of bees, and may have black and yellow stripes along the abdomen. The adults are avid seekers of nectar from various flowers, although a few species feed on pollen. They are important pollinators, and can reach the nectaries of many wildflowers that are inaccessible to other flies. This one was captured at Bartley’s on meeting day. 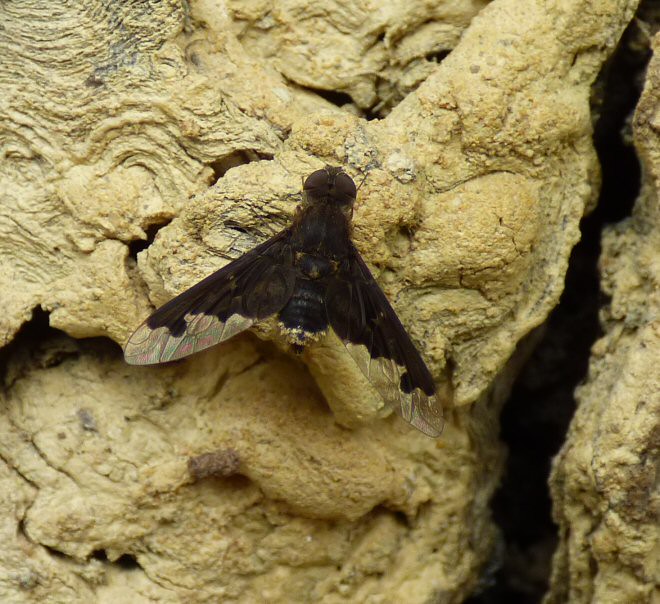 The colourful GumTtree Tip-wilting Bug was captured on an Acacia pendula It belongs to the Coried tribe and is a nymph of an Amorbus species. The adult form is a dull brown in colour. 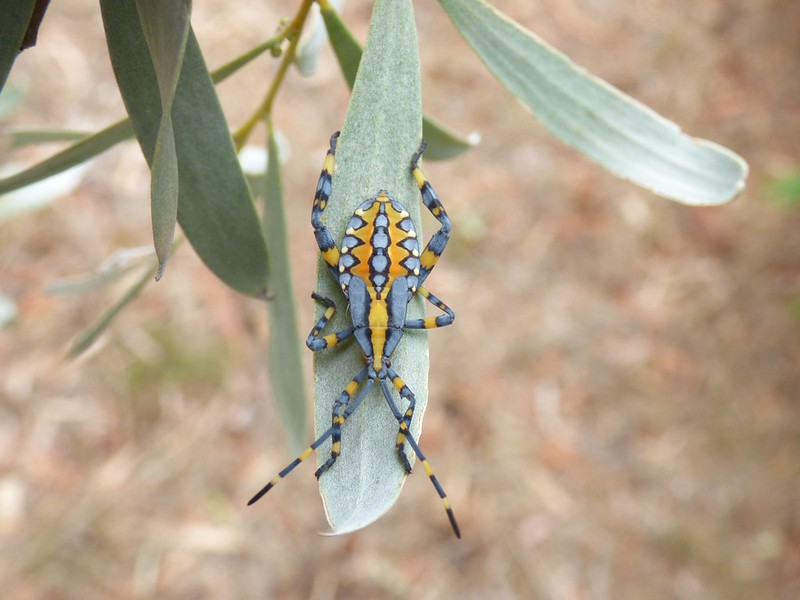 Caught on camera: Simon caught these two deer near Red Box Track. There are obviously a few in the Donchi Hil section now. This is the third report. 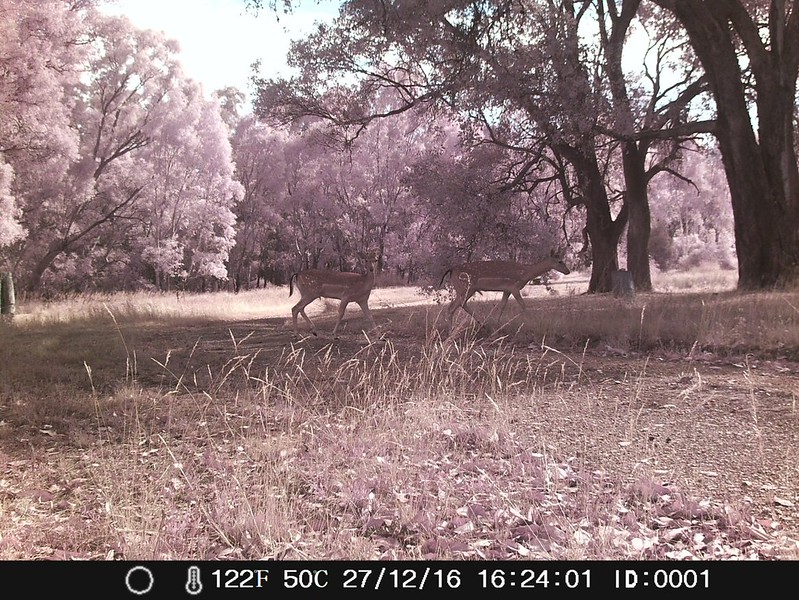 Weed notes from Mick and Tony

Not a lot happening since the last newsletter. One large olive was demolished on Baynes Gully Rd and the olives on the Ridge and Coyles Track have been visited and treated. A few briars are popping up on Grasslands so anyone with time to spare will be welcome. Rutherglen Natural Features Reserve will be visited soon to check on briars.
A sweep was made With Tony of the roadsides adjacent to the park where the Green Army removed Cootamundra Wattles last year. Many new plants were culled. Great follow-up. Thank you both.

In early February a worker from Taronga Zoo heard a Regent calling near the hide area at Chiltern Valley No 2 Dam.
A search was carried out but no bird was found. Please keep an eye out for any sign of the birds especially in gardens and around dams. It is early for them to be here but things in the bird world seem to be changing. Please report any sightings as soon as possible to help with follow up searching.
The release for 2017 will be in mid April. The training day for volunteers will be on March 25th at Honeyeater Picnic area.

Rainfall for January was 57 mm

Meet at the Chiltern Post Office at 9am. BYO all your needs, lunch, binocs, sunscreen, repellant, chair andof course energy!
Details of the activity will be sent nearer to the date.
Field contact 0407 486 480