The weather has played tricks on our meeting days for the whole year so it was expected that our Christmas celebrations would be under threat. As we gathered happily on the ridge at grasslands and enjoyed the views and the wonderful spread of food we eyed the approaching change. It came in suddenly just as we had finished our meal forcing us to pack up quickly. However the squall did not last too long so some of us explored the block. The western face of the block is by far the best for native grass, orchids and understorey. The Hedge Wattles that Mick planted some months ago are doing very well. They were unguarded as they are not prone to kangaroo predation. 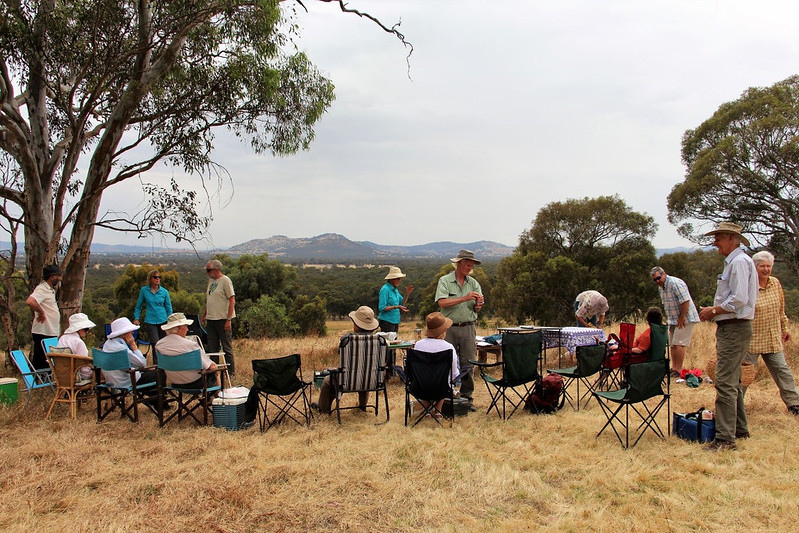 The St Johns Wort was sprayed in mid-November and the brown patches were obvious. The Briar Roses are no longer evident but Mick reports that there are emerging ones so the campaign will continue. Mick, Tony and Helen have devoted many hours to the demise of the Briars, well done and thank you.
Along with the dying Vinca at Bartley’s Block, the olive pulling and spraying of St Johns Wort and Briar at Rutherglen, plus the Agave in the pit, I think we can say we have had a successful year in our war on weeds. Well done to all who took part.

Cleavers, that clinging weed which we battled at the hide plantation at Valley No 2 dam inspired our member Jo to do some research and here is her report: Another name apparently is Robin-run-the-hedge! I thought the following was interesting: Other uses: Dioscorides reported that ancient Greek shepherds would use the barbed stems of cleavers to make a "rough sieve", which could be used to strain milk. Linnaeus later reported the same usage in Sweden, a tradition that is still practiced in modern times. (Note:My curiosity about him got the better of me - Dioscorides lived in the first century AD).
In Europe, the dried, matted foliage of the plant was once used to stuff mattresses. Several of the bedstraws were used for this purpose because the clinging hairs cause the branches to stick together, which enables the mattress filling to maintain a uniform thickness. The roots of cleavers can be used to make a permanent red dye. 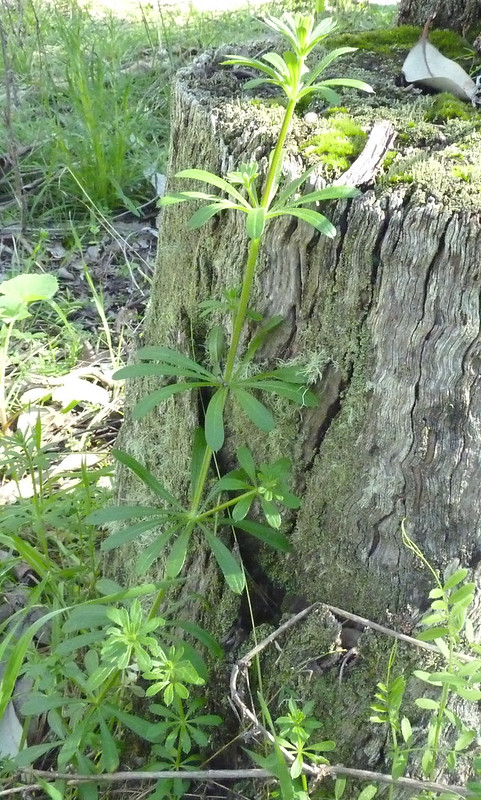 Thankyou Jo for this report.

we were offered some plants of Banksia marginata which grows in the Mt Pilot section of the park. These were planted and guarded in early November by Mick. After the planting there was good rain so hopefully the survival rate will be good. 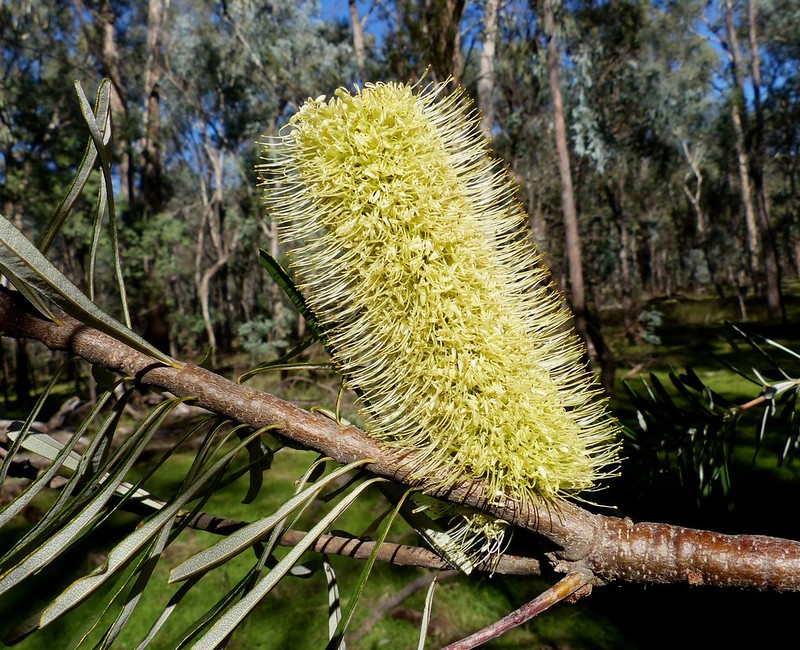 More on little things from Neil

In broad daylight Neil came across this bundle of feathers in the middle of the road and on inspection discovered it was a Tawny Frogmouth unwilling to move. It seemed to be a young one so was moved to a safer spot after being photographed. 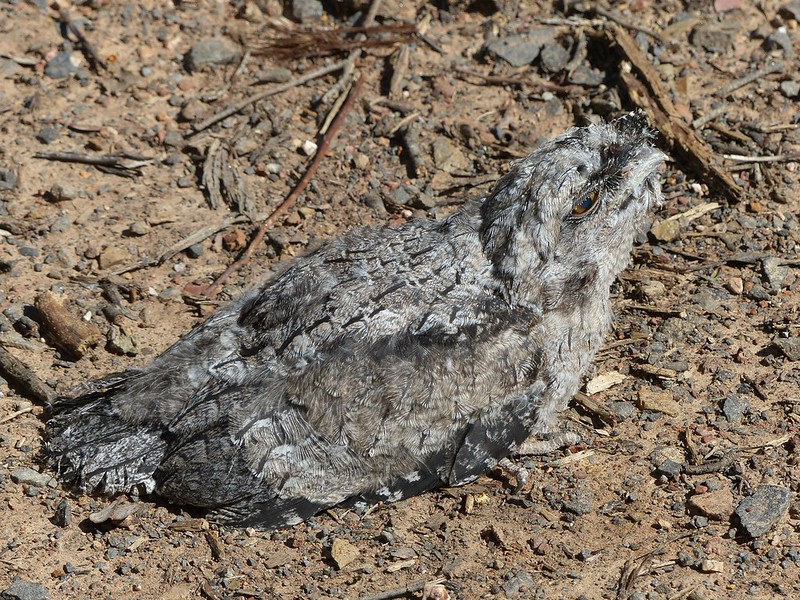 There are a few flora species in the purple range that have been spotted in their unusual white form and these include Chocolate Lilies, Fairies Aprons and Waxlip orchids and blue pinchusion. 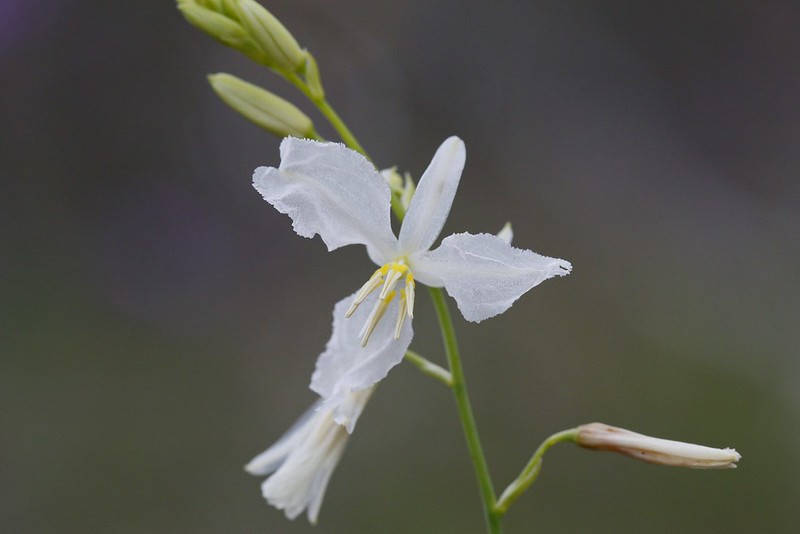 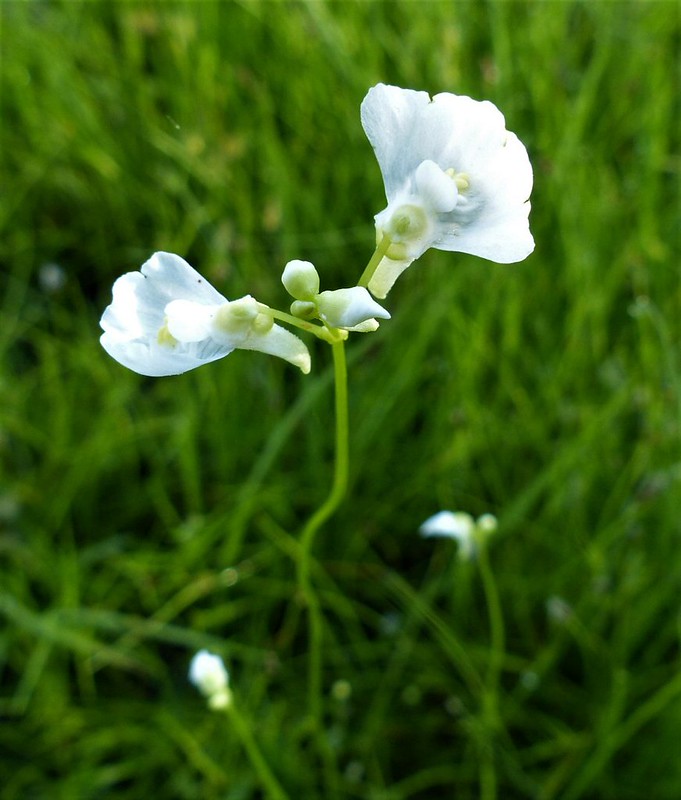 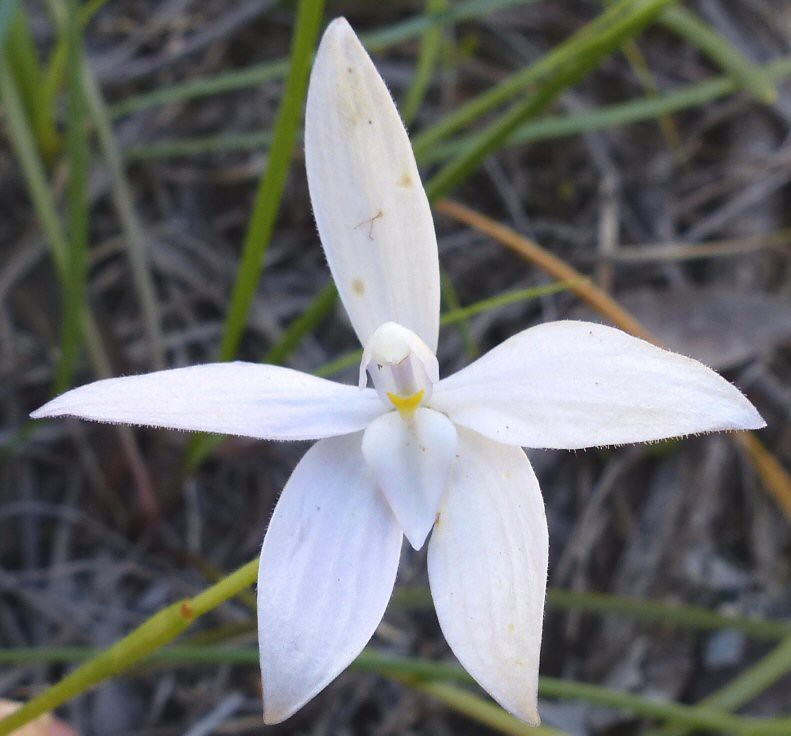 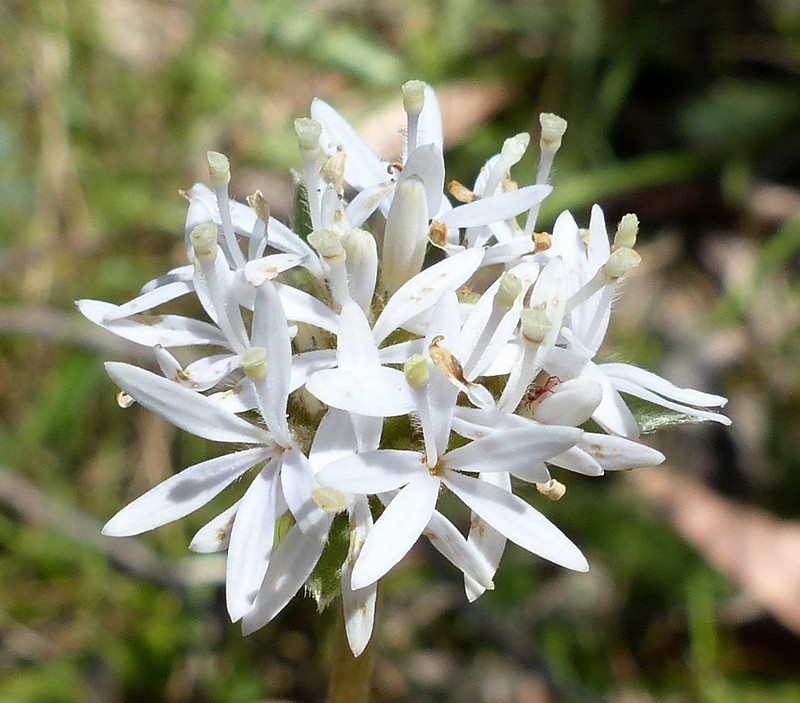 This year the wet weather provided ideal conditions for the Fairies Aprons to flourish in the swampy areas. 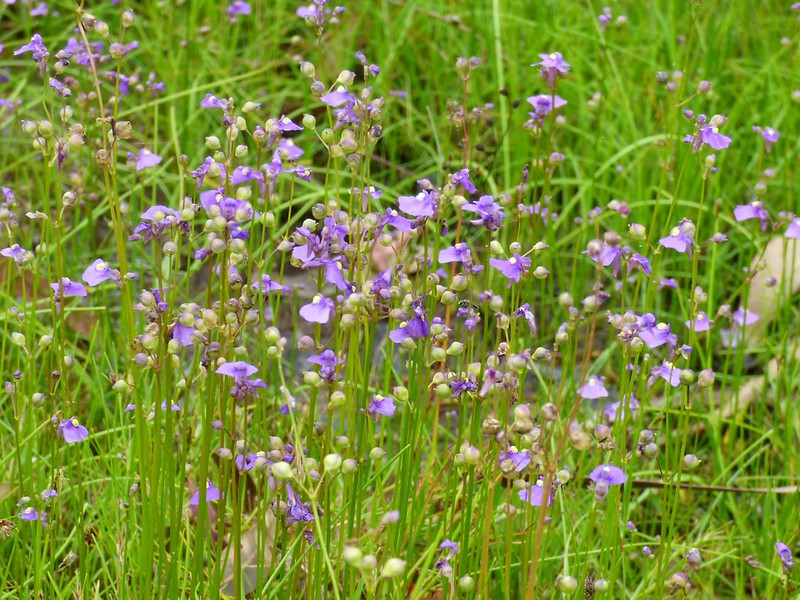 The delicate Finger Flower shows its tenacity by thriving in the harshest of soils. Our goldfields flora is remarkably beautiful and resilient. 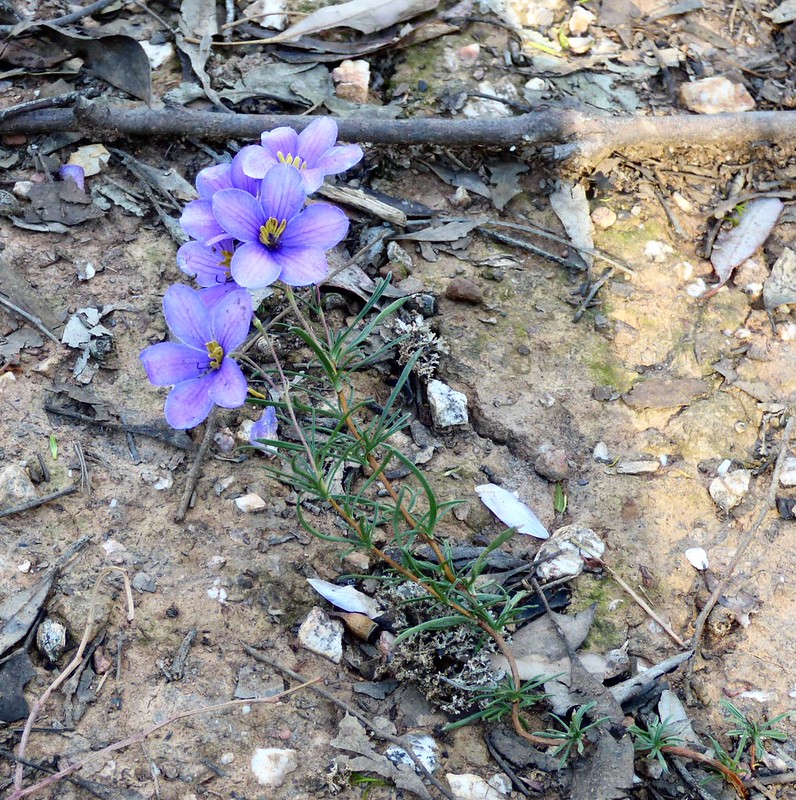 The spelling is straight from the Age! Wisdom is an Albatross who is the oldest known breeding bird in the wild. At the age of 66 she has laid an egg. She was banded in 1956 by biologist Chandler Robbins (who is now 98!) on a Pacific Atoll. Forty-six years later Robbins spotted her again and rebanded her with a sturdier band. On December 3rd this year a volunteer at Midway Atoll National Wildlife Reserve found and photographed Wisdom with her precious egg between her webbed feet. It is estimated that Wisdom has travelled 4.8 million kilometres in her lifetime. If you are interested in her story you can read more about this remarkable bird at :

Successful podding of S Recta Earlier this year four Swainsona recta plants were planted in the enclosure at Rutherglen Reserve. Three thrived and one, which was very small at planting, died. Two flowered and one of the two has set five seeds pods so I think we can say this trial has been a success.

Thank you to everyone who purchased our 2017 Calendar. The money raised from the sales goes to support the park and our activities. This is our only fund raiser for the year and it has been very successful. At the time of writing there are still several for sale. Scroll to the bottom of this page for purchase information.

The cooler, wetter spring made for interesting native bee watching in recent months. Some species seemed to be unaffected by the conditions, showing up around the same time as they have in previous years. The aptly named ‘common spring bees’ (Trichocolletes species) were out in August, easily spotted zooming about on the Purple Coral Pea (Hardenbergia) flowers. So, too, were some of the ground nesting bees. It’s though about 70% of the perhaps 2,000 species of Australian native bees make their nests in the ground. Watching them dig their holes, and then come and go as they provision their nests, never ceases to amaze me.

A little bit late on the scene this season were Lipotriches and Lasioglosum bees, which are regular visitors to flowering flax lilies (Dianella). As usual the various pea flowers and grevilleas were popular with a range of bees as well as many other insects, including beetles, flies, butterflies, moths, wasps and the like. 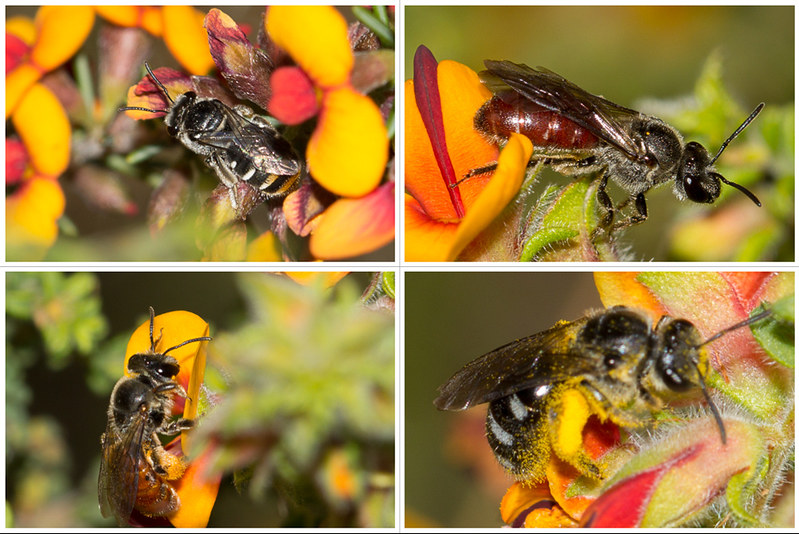 Other bee species have been more elusive this spring. My first blue-banded bee sighting (Amegilla sp.) for the season wasn’t until mid-November. That’s six weeks later than last year (and I assure you it wasn’t for lack of looking! Indeed the Blue-banded bees are usually in good numbers by December, but they are still a relatively rare sighting at this stage this year.

Those who have bee hotels (nesting spots for native bees and other insects) can expect to see some action very soon, if you haven’t already. At mine, the masked bees were the first to be seen a couple of weeks ago. In the last week the resin bees have been very busy. I’ve watched bees emerge from last year’s nests and females already completing new nests. 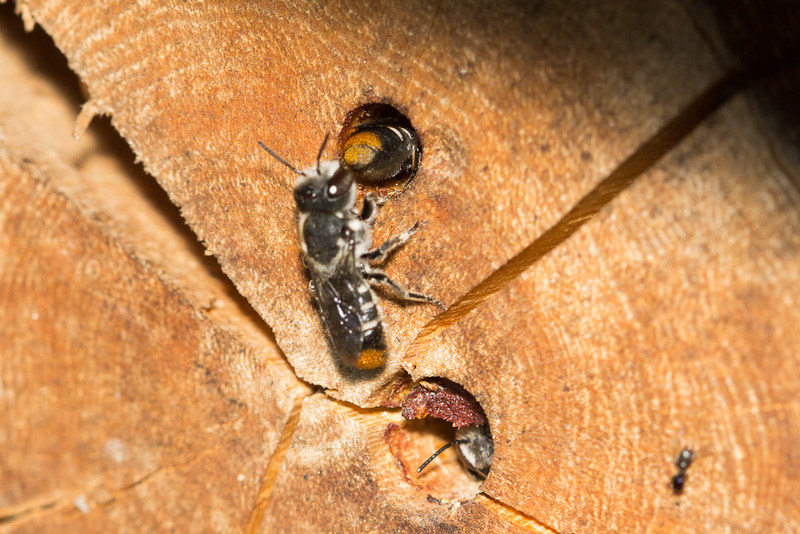 Nearby, the male resin bees (in this case Megachile ferox) are again roosting on Dianella stems. 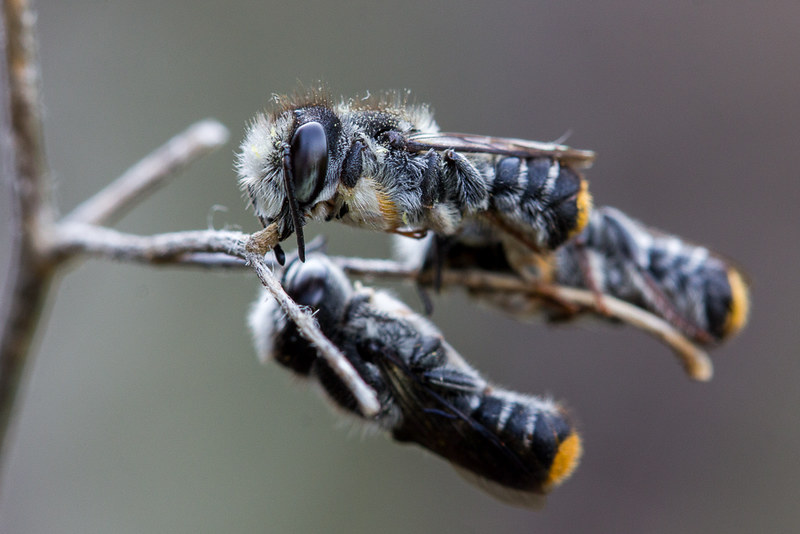 This is the fourth spring running I’ve watched them here. They turn up as the sun goes down; jostle for position on a stem, then groom, and in time they settle down for the evening. In the mornings they reverse the routine and groom, warm up and then fly off for the day.

There are many species of bee with this roosting behaviour. It’s typically, but not exclusively, males. I’ve seen Amegilla (blue-bandeds), Lipotriches and Megachilid bees roosting in this way locally – and the records across Australia are even more diverse. In some cases there can be tens or even hundreds of bees all roosting together. So if you’re out in the Park in the late afternoon or evening, keep an eye out for this fascinating behaviour.

Thank you Karen for this article and for the tip to find them in a more or less inactive state. It has been a spring to be remembered.

Next meeting will be on Sunday February 5th 2017. The venue and activity will be advertised closer to the date.

In the meantime I wish all readers a Happy, Peaceful and Safe Festive Season. To all our wonderful volunteers and our supporters far and wide, thank you for helping to make this year a success. It has been a pleasure to write the newsletters each month. Thank you to those who have contributed and I look forward to receiving your contributions for 2017. Eileen

The 2017 calendars cost $20 plus $ 9.70 postage This is now the flat rate for ONE calendar countrywide and includes the cost of a padded bag.

If you wish to use electronic payment the details are:

BSB number: 803070
Acc number: 81167
Please add your surname to the transaction.
Advise Neville (This email address is being protected from spambots. You need JavaScript enabled to view it.) when you have made the payment so that we can keep track of payments. Thankyou for your support.