Well we certainly dodged a rain bullet on the weekend, Saturday being the perfect autumn day and Sunday provided the long awaited autumn break. After the morning event, which Neville has recorded below, we spent the afternoon at the southern end of the block. Since there were quite a number of willing hands much was achieved. Trees were planted, nest boxes were inspected, small olives were pulled and stubborn olive and boxthorn regrowth was sprayed. 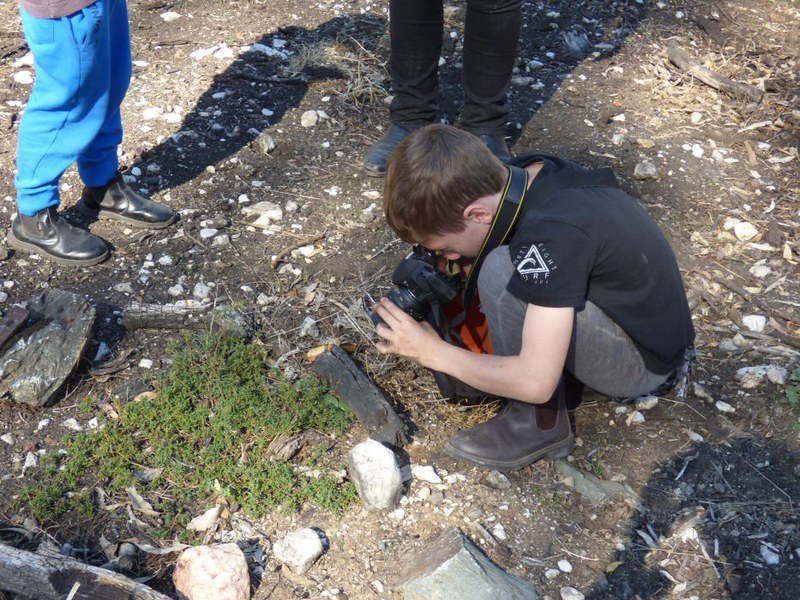 Our roaming members pulled over two hundred olive seedlings and we will need to persist with task well in to the future. Our two young members enjoyed the nest box checking and were excited to see their first gliders. I think we have two budding nature lovers as new members 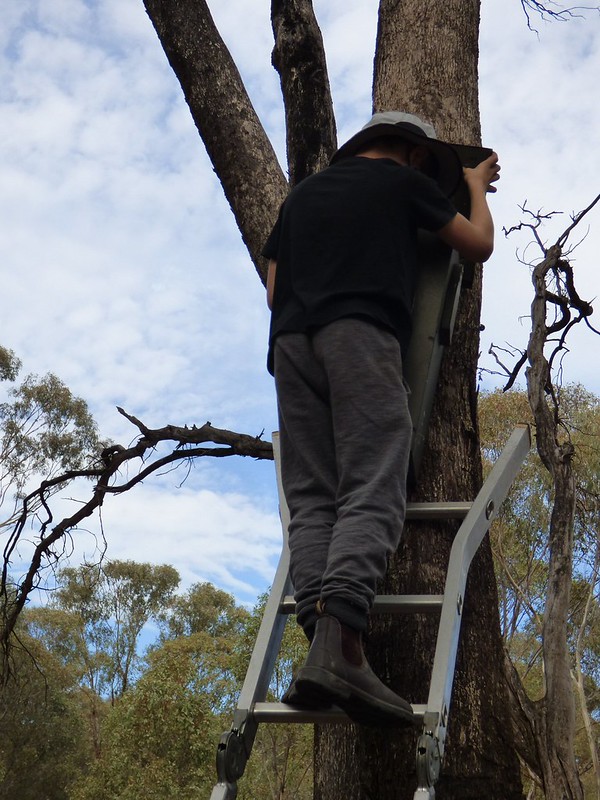 Event: Unveiling of interpretive signage as the final part of a project to enhance the reserve for visitors

Neville Bartlett welcomed everyone and gave a brief history of the reserve followed by an outline of the project including the $10,000 “Communities for Nature” grant from the Victorian Government administered by the Department of Environment, Land, Water and Planning (DELWP).  The work involved flora and fauna surveys, removal of pest plants, clean-up of rubbish and removal of hazards.

Ian Stones (Rutherglen Gold Battery Committee) then gave a short talk about the history of the mine at the site and described the purpose of some of the structures that are still present.  He also had a map of the mining activity in the Rutherglen district that dated back to about 1900. 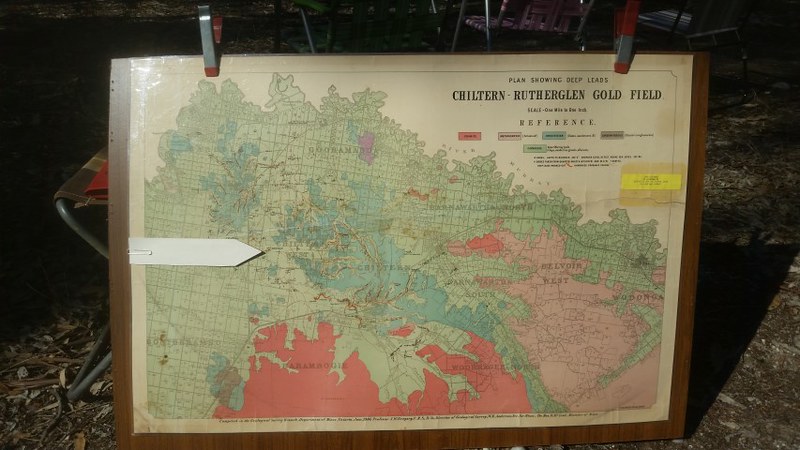 Ian Stones and Eileen Collins then unveiled a plaque that describes some of mining activity that took place at the site.  Special thanks were noted for Jim Blackney who was instrumental in getting the reserve purchased and transferred to the Crown in 2001 and Eileen Collins (President of Friends of Chiltern-Mt Pilot National Park) for her substantial efforts in organising the project and seeing it through to completion. 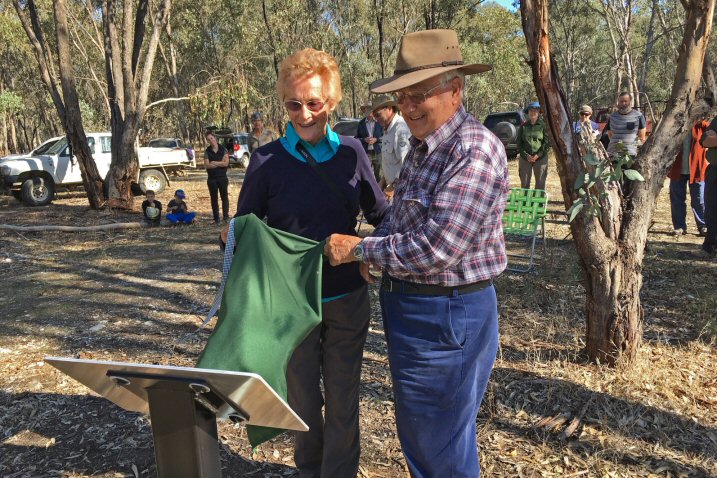 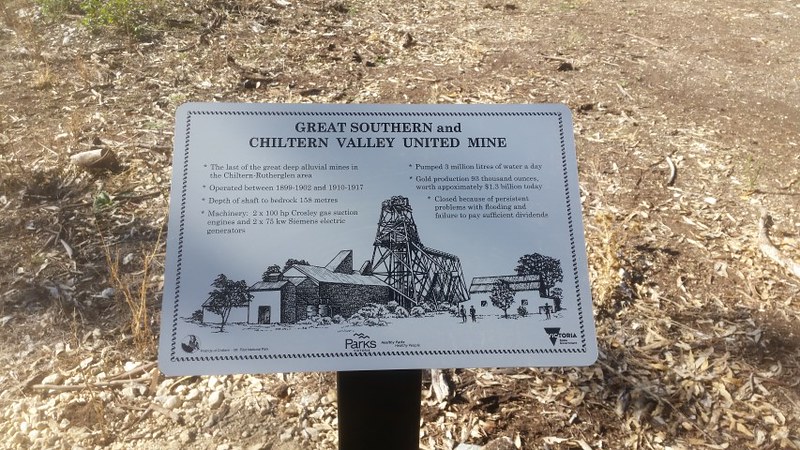 The support and work carried out by the Parks Victoria rangers was crucial, and much appreciated, in getting this project from inception through to completion.

The ceremony was followed by refreshments and planting of some trees and shrubs.  There was much interest in the mining history and the map that Ian Stones had brought along. 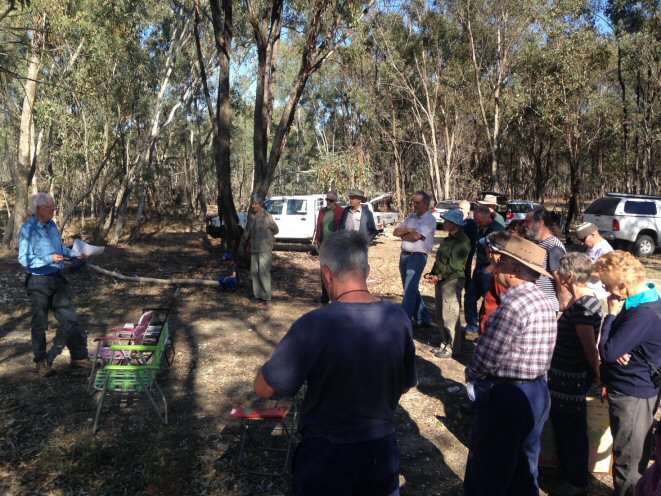 During the month the new plants at the northern end were watered, Peppercorn regrowth was sprayed, loose plastic guards were rounded up and best of all forty small olives were dealt with. The spots where some newly planted trees died were opened up in readiness for replacement at the May meeting. Parks staff have installed the plaque.

Bats are one species we do not often see. Simon’s friend who is a bat specialist recorded this species:

Martin O’Brien spotted a lone Freckled Duck on Valley No 2. Several people have reported a flock of Swift Parrots and three banded Regent Honeyeaters plus three wild ones have also been spotted. Now that there are puddles everywhere the chances of seeing Regents drinking have diminished.

Planned burning did not occur due to the dry conditions and current rain will end the season.

Dumping of rubbish is a continuing issue within the park.

Leaf beetles and their larvae

These interesting little beetles feed mainly on eucalypts and acacias and they come is an amazing array of colours. They are affectionately called tortoise beetles because of their ability to draw their legs, head and antennae under their wing covers to avoid predators, just as a tortoise does when threatened. A ladybird beetle is a fine example of this behaviour. 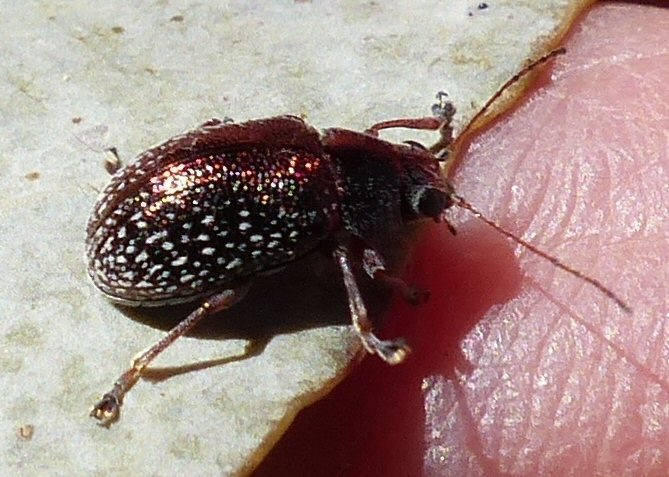 Victoria is home to  many different species. In Chiltern we have photographed three species along with some of their larvae. So for those of you who are interested in the smaller bush inhabitants the beetles present a challenge.  Please send  any images to me for recording purposes. 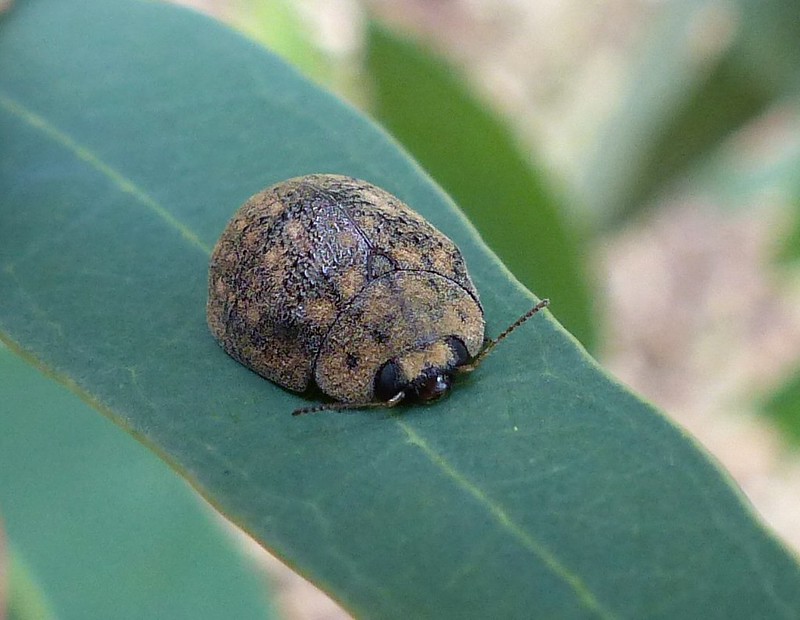 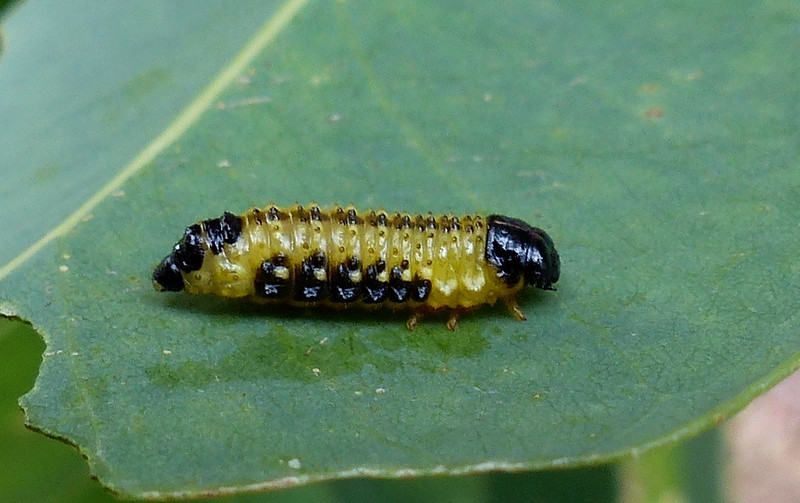 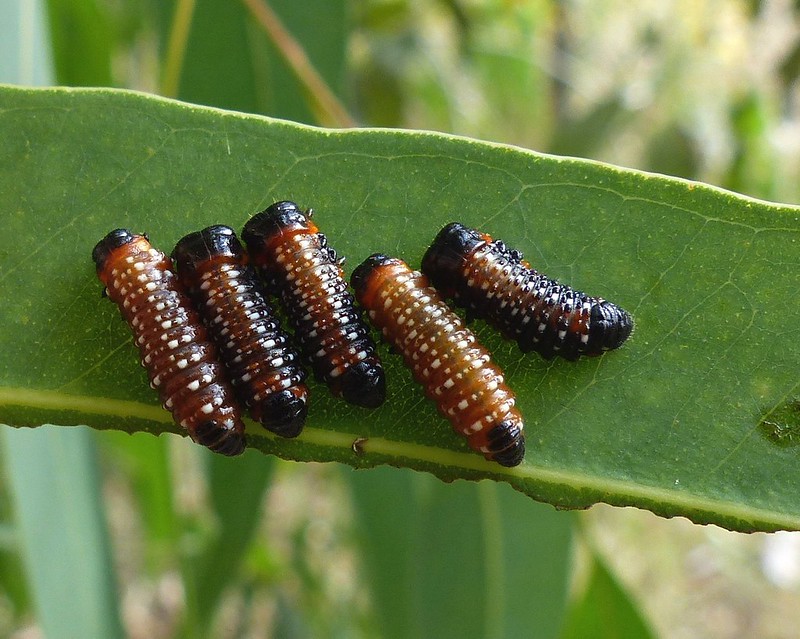 To learn more about these little beetles visit these sites:

Below is the website of Martin Lagerwey who is studying these interesting little beetles.

An Unwelcome Arrival In the MIA

The Common or Indian Myna is a species that was introduced into Australia in the mid-1860s around Melbourne  and later into Tasmania and Far North Queensland. The Tasmania ones didn't survive but the ones in Queensland took  off and spread throughout the sugar cane growing areas up north. The Mynas have spread from the Melbourne area to all coastal areas right through NSW and southern Queensland. Large flocks of them have been sighted along the Murray River towns and in Wagga. They have arrived in Jerilderie in recent years so it was just a matter of time   before they made it to the MIA. 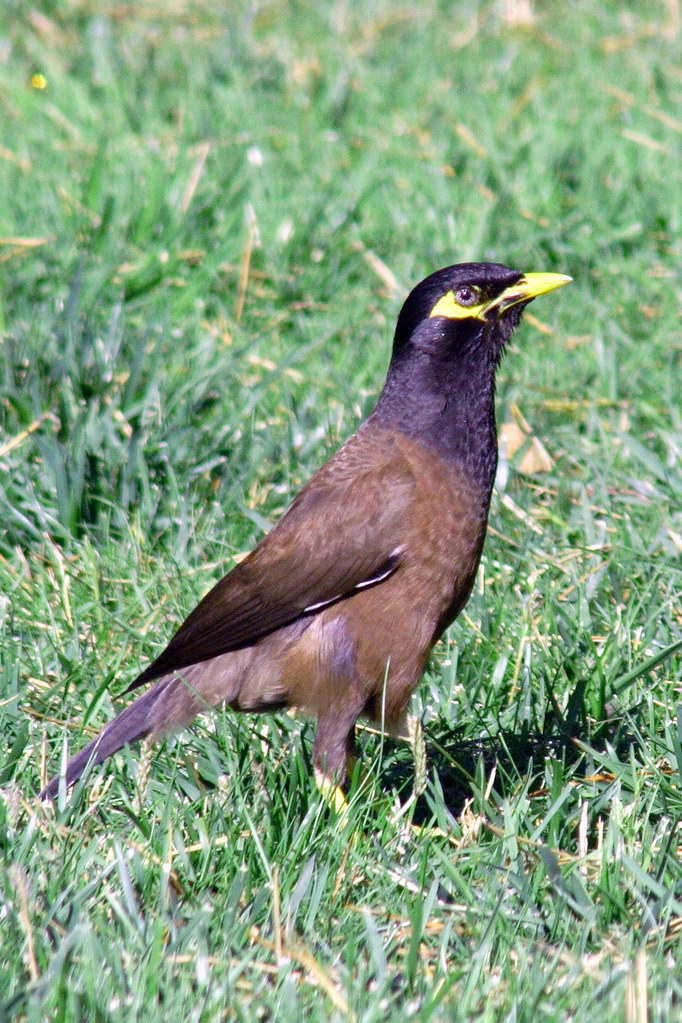 On Friday 8 April, I was driving along Toorak Road in Leeton and was shocked to see a pair of Mynas fly out of the vineyards just beyond the Toorak Winery and perch on the power lines. I feel that this will not be welcomed by the local fruit and wine growers of the district as these birds will attack a crop and greatly affect the yield and quality of product. The farmers have enough to contend with with the already introduced feral species like Common Starlings, House Sparrows and Common (European) Blackbirds.

The last thing they need is another pest species that have the reputation of decimating grape crops to the extent that along the Murray wine growers have had to protect their grapes by covering them in netting.Not only are these birds a curse to crops they are major problem for our native birds as the birds compete for nesting hollows thus preventing our native parrots, like Eastern and Yellow Rosellas,  Mallee Ringnecks and particularly the threatened Superb Parrot from nesting.

Mynas have been recorded taking over an already occupied nest hollow and thrown out the eggs and killed the young in order to breed there themselves. Leeton Shire Council has no eradication plan for this species and the advice I have been given by experts is to exterminate these birds before they breed up to such numbers that it will be impossible to get rid of them.One further alarming concern was written up in the March 2016 edition of Australian Birdlife magazine in which scientists from Griffith University in Brisbane found that the mynas in south-east Queensland carry avian malaria DNA and that is being passed onto native species that associate with them. Of even more concern was that the mynas around Melbourne carry even higher levels of the blood-borne malaria parasites.Like any feral pest they must be got rid of before it is too late and impossible to control. Cities like Canberra and Wangaratta have plans in place to trap and exterminate this species so we should do it locally before they take hold here in the MIA and cause massive problems for both local farmers and native bird species alike. Max O'Sullivan