The arrival of two Regent Honeyeaters at the caravan park changed our plans a little and it was unanimous that we go to inspect the site. Despite surrounding the magnificent flowering ironbark we left unfulfilled. However Lyn and Bill returned around 5pm and spotted blue blue red metal and to quote Lyn, “so close we did not need binoculars to get the bands”. The bird was also photographed by Matthew Rogers that same evening. Matthew and his wife Debbie were due to fly home to the UK the next day so this new bird sighting was a fitting farewell.

After the disruption to our schedule we headed off to Bartley’s block to inspect nest boxes and pull the dreaded Caper Spurge. The nest boxing group possibly had the better of the two tasks with Squirrel Gliders in the first box and an inquisitive Sugar Glider in residence in another with a third box containing a freshly made Tuan nest with feathers and poo being the giveaway signs. No Tuan nest is really “fresh”  thanks to the odour from their faeces which are deposited in one corner whereas glider nests are clean and have that earthy, gum leaf fragrance. 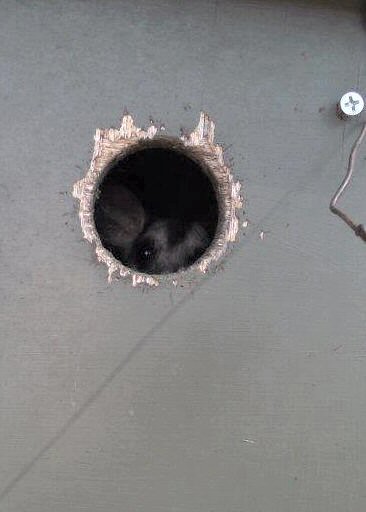 The spurge pullers found many plants with seed heads and these were bagged for removal. Morning tea and a chat was next before we  moved on to the dreaded Agave Pit. Armed with shovels and a variety of digging tools we removed hundreds of small plants and their underground runners from the sandy soil. The best part of this visit was seeing the rotting state of the big plants removed on previous visits. 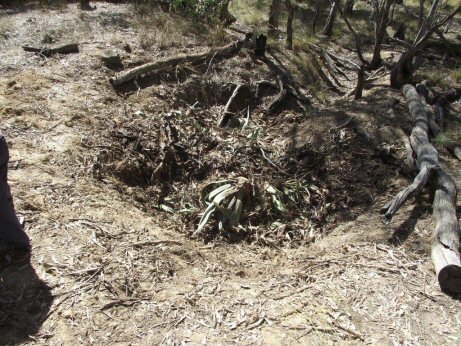 It is amazing what a difference an energetic group of twelve can achieve in a relatively short time. Well done everyone. 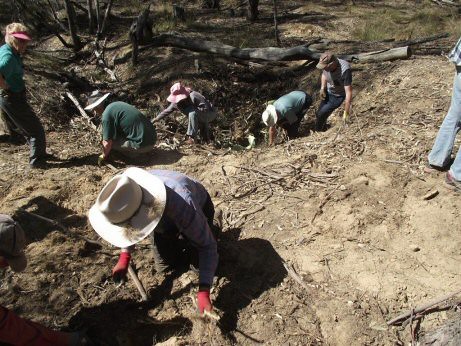 A late and well deserved lunch was enjoyed at Tuan campsite under the shade of a beautiful flowering Ironbark to the accompaniment of much bird acitivity. A vocal female Golden Whistler was announcing her arrival for winter, Scarlet and Red-capped Robins, Fairy Wrens, Grey Fantail, Weebills and the raucous Red Wattlebirds and  Noisy Friarbirds contributed to the variety. Tuan plantation is now well over fifteen years old and is providing a lightly treed open area for bird watching. 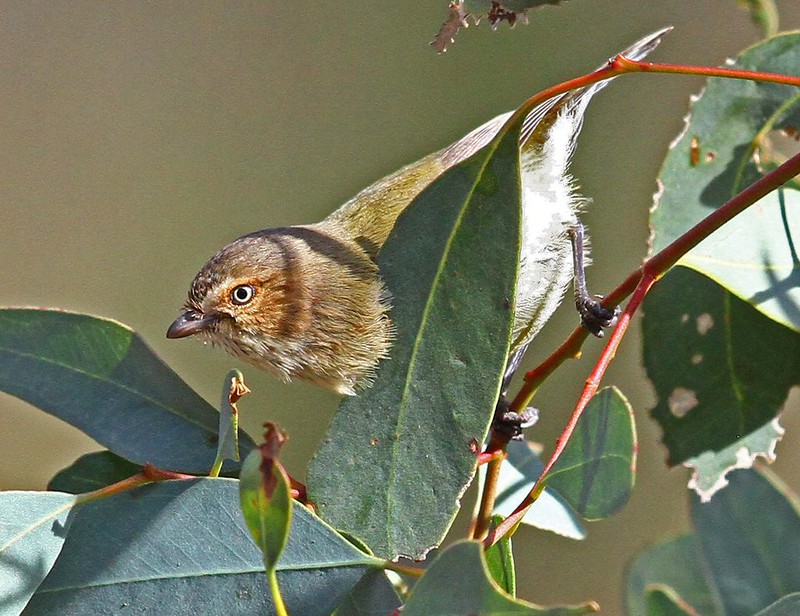 Swift Parrots are on the mainland again but to date there are no reports of sightings in Chiltern.

Galls, lumps and bumps on plants

Put rather simply, when a mosquito or other insect bites you the bite area swells and when gall inducing insects such as wasps, flies, bugs and thrips  attack plants, the plant responds by swelling or forming a gall. There are many other causes of galls such as fungus, bacteria and injury. Galls come in a wide variety of shapes and sizes. Insect galls house the  insect’s  larva and provide shelter and nutrients. Some galls become food for birds such as parrots which use their strong beaks to crush them. Chewed galls on the forest floor are evidence of parrot activity on galls. A few examples of galls found in Chiltern area are presented. 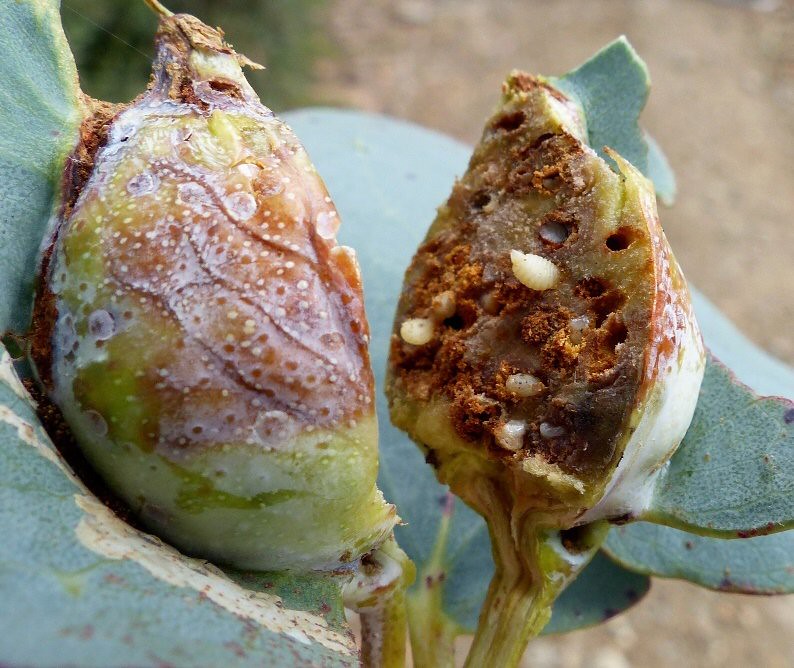 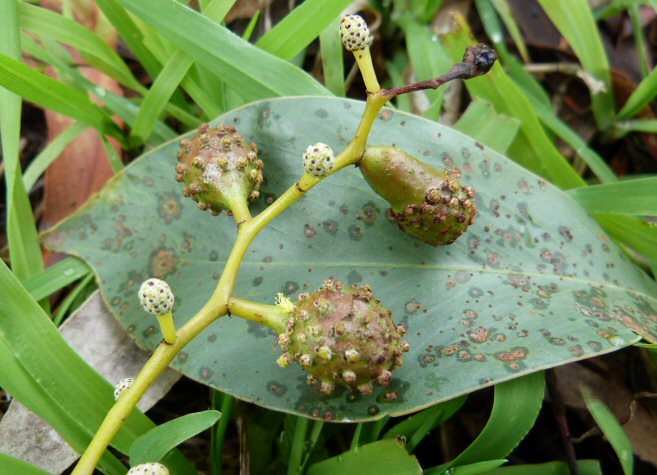 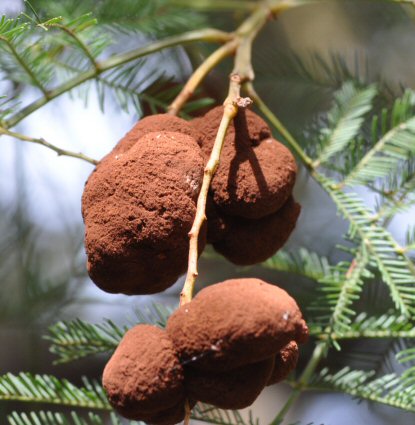 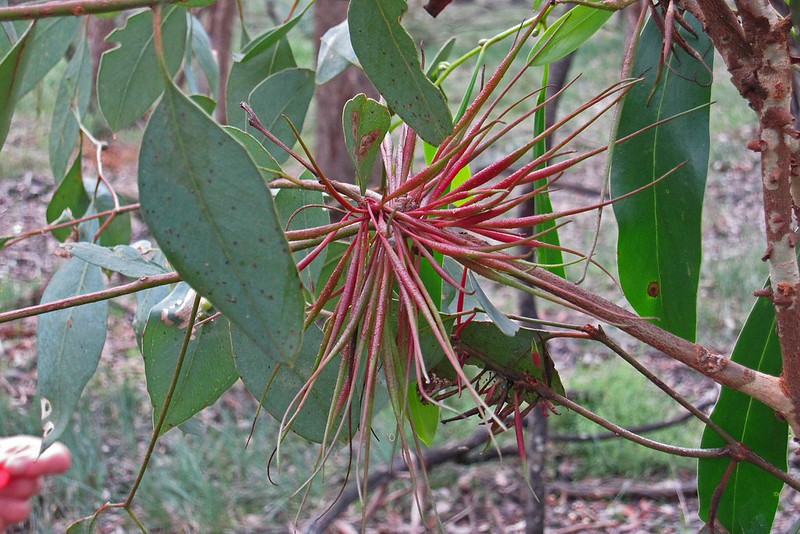 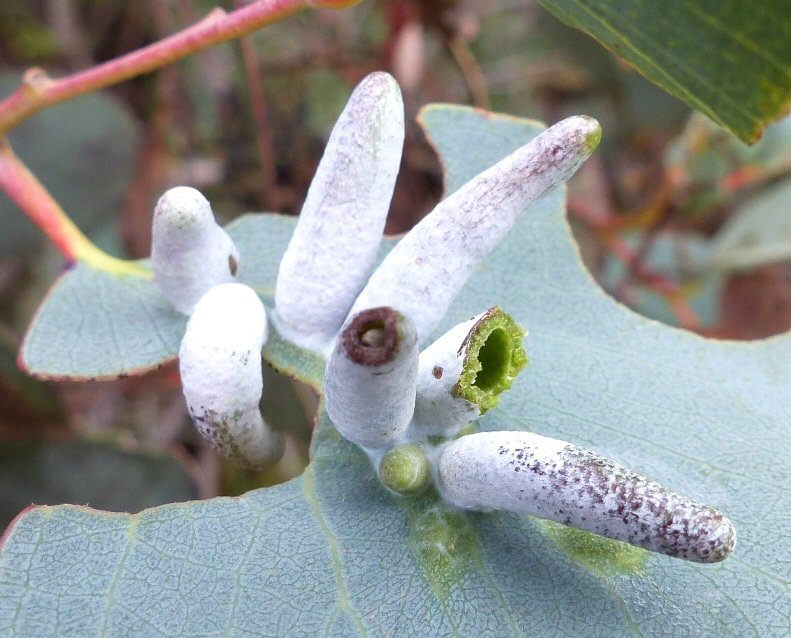 Anyone interested in learning more about galls would find Rosalind Blanche’s excellent book “Life in a Gall”a great reference.

The Web of Life in Action from Simon Bennett

At 1:10 pm on 14 March 2016 in bush adjacent to the park near Red Box Track I came across a large Lace Monitor (Varanus varius) struggling with something on the ground. This was directly beneath a tall dead Mugga Ironbark (Eucalyptus sideroxylon) with large slabs of exfoliating bark. The goanna then climbed the tree where I could make out that it had a live Squirrel Glider (Petaurus norfolcensis) in its mouth. The glider was struggling a lot at first, but the goanna stayed clamped on to the glider for the next 25 minutes when the goanna, still with the glider in mouth, moved under a large slab of bark with only the goanna’s tail showing. At last view there was little movement from the gilder. I returned about half an hour later and the goanna was still up the tree with no sign of the glider which I presume had been eaten. The goanna may have initially encountered the glider sheltering under the bark of the dead ironbark which had no evident hollows. A photograph of the struggle is attached. 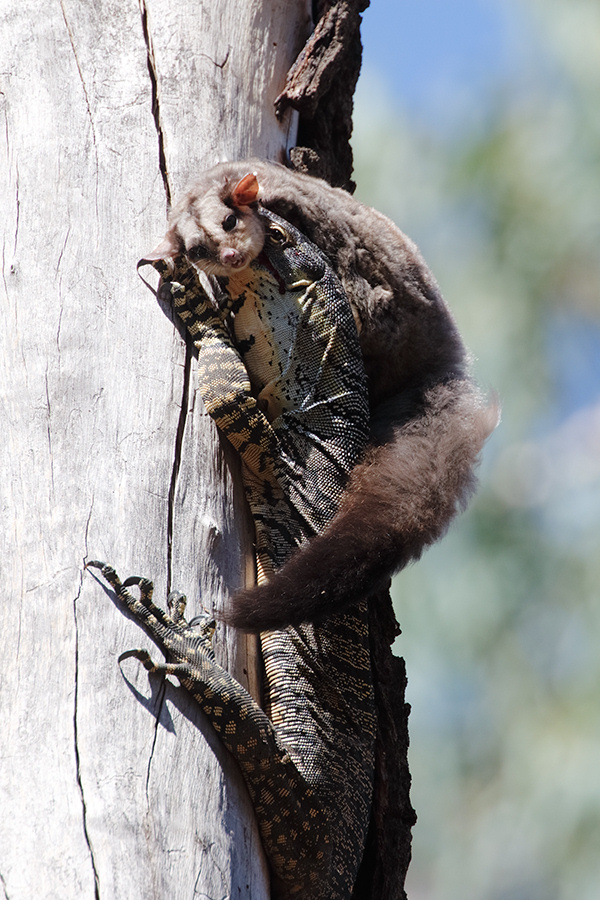 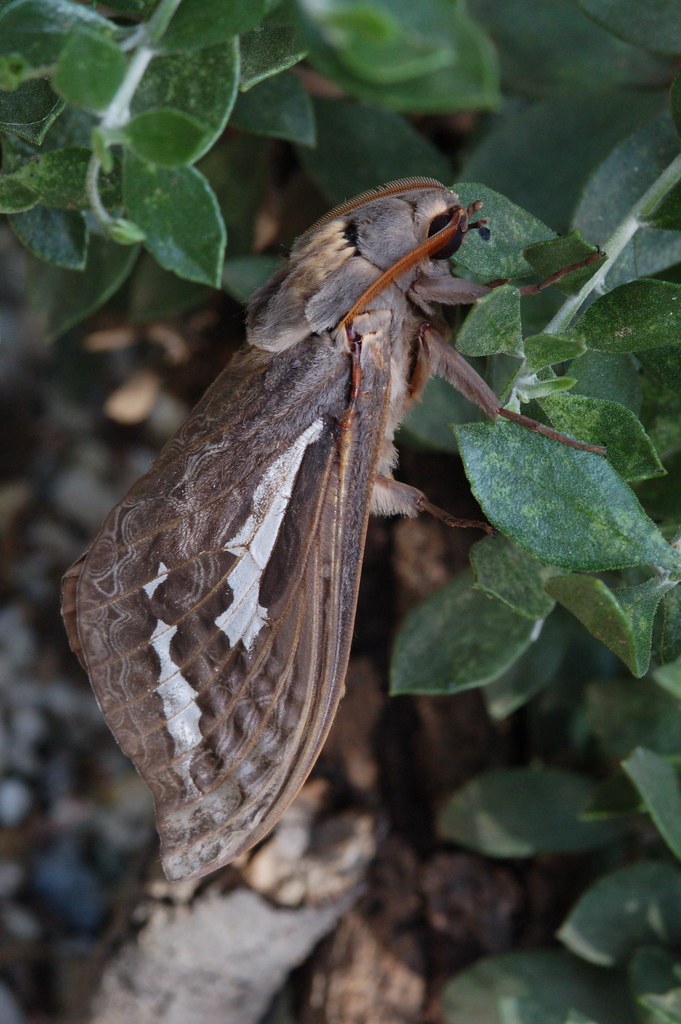 Trictena atripalpis can be easily recognised by its orange antennae. Abantiades barcas is featured in Moths of Victoria volume 6. Thank you Robin for this news. 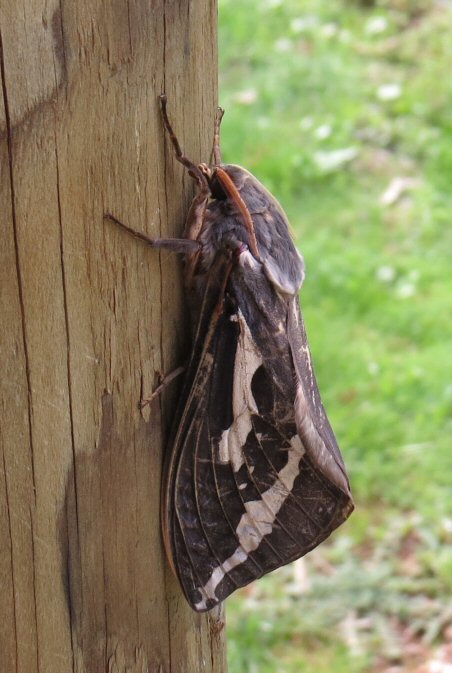 These two moth species appear after autumn rains sometimes in hundreds. They live for just a day and do not feed, their purpose is to breed and this they do well. The females scatter their eggs among ground litter and the larvae live underground and feed on plant roots. When the cycle is completed the moth emerges once again and its pupal case can be seen protruding from the soil. 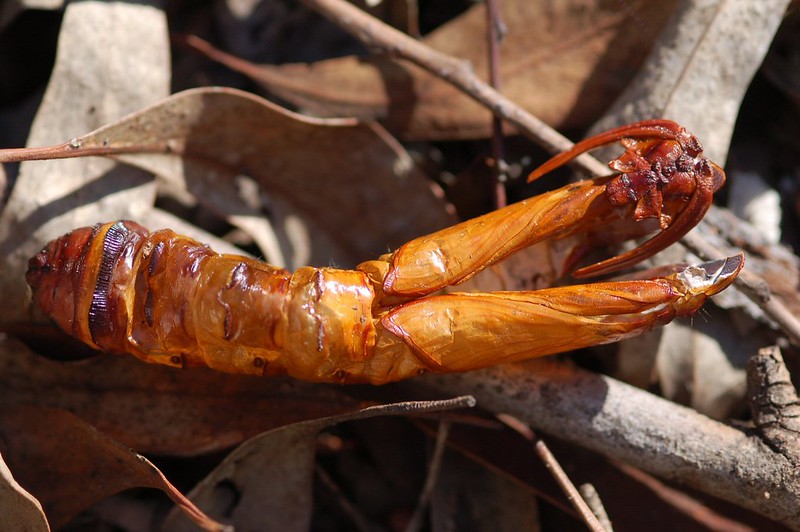 There are six superb volumes of Moths of Victoria published by the Entomological Society of Victoria at a cost of $12 each including a DVD. An order form maybe found at:

A working bee will be required in mid-April to prepare for the May launching of the interpretive plaque and to celebrate the restoration work on the woodland block. A notice will be sent out as soon as we fix a date, hopefully after we get some rain.

The main focus at the moment is on planned burning but none are happening in the park at the moment as it is too dry. Autumn burns are programmed for Red Box Track, Grevillea Track, East Triangle Track and  Greenbreak Track.
Gas Pipeline - Installation of the pipe has been completed in the park and topsoil has been re-spread. Further rehabilitation, erosion control and replanting works will be completed over the next few months.
Fire affected area - All tracks are now open including White Box Walking Track. People should continue to be cautious of falling trees if entering these areas. Regeneration of native plant species is already occurring.
The Board and staff from NE Catchment Management Authority have visited the park and have been briefed on threatened species programs funded by the authority. Brian Pritchard, Ranger Team Leader, Beechworth.

Next Monthly Meeting Saturday May 7th

Meet at the Chiltern Post Office at 9.0am or go directly to the northern end of the Rutherglen Natural Features
Reserve. We will be celebrating the completion of the restoration of the Grey Box woodland and the Great Southern and United Mine site. An interpretive plaque will be unveiled. Morning tea will be served.