Welcome to 2016 and the adventures of Friends for the year. On Sunday February 7th fourteen of us gathered at Bartley’s block where we inspected the Vinca infestation and the results of  spraying. This is a very determined weed which has met a very determined eradication group. Bill has recommended treatment which he used with success on his property so we will try that. Peter installed the plaque on the Friends seat and we chatted to a birder from Melbourne who was camped at Tuan Campsite and enjoying the park on foot. 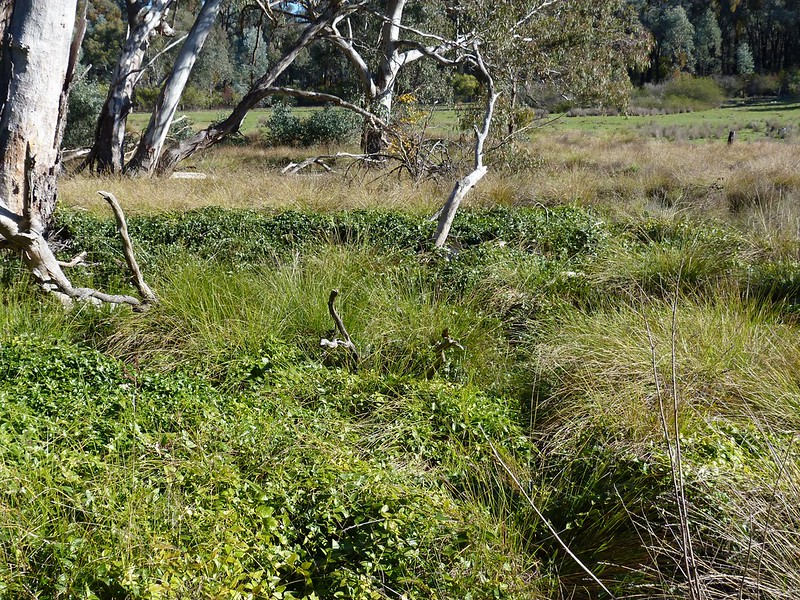 Next stop was Donchi Hill where we had morning tea and welcomed our new member, David. We split into two groups  to maximise our efforts. Mick led his team to search the olive and peppercon sites. One Peppercorn was eradicated and no olives found, a very good result. The nest box team covered the ten boxes on the northern side.

All contained leaf nests and one had a dead young glider in it. Bees had filled another box which will have to be removed and cleaned. Lunch at the picnic area was welcome before the last boxes were checked. One box which had always had Sugar Gliders in it had been taken over by a Tuan. Large feathers and bits of grass plus the tell tale poo in the corner left us in no doubt. Rarely do we inspect sets of boxes and find no animals in residence and we commented upon the lack of insect life and wondered if there was a shortage of food.

Just before Christmas on a wild, windy and very hot day fire struck on Riley’s Road near the edge of Barnawartha township. It quickly crossed the freeway and into the Indigo Valley and the park. Thankfully no lives were lost. Approximately 500 ha of the Chiltern section was burnt, most of that in the reference area. In the Pilot section 1100 ha were burnt and the reference area suffered badly. In both reference areas the loss of huge old trees was distressing. Photos courtesy Brian Pritchard 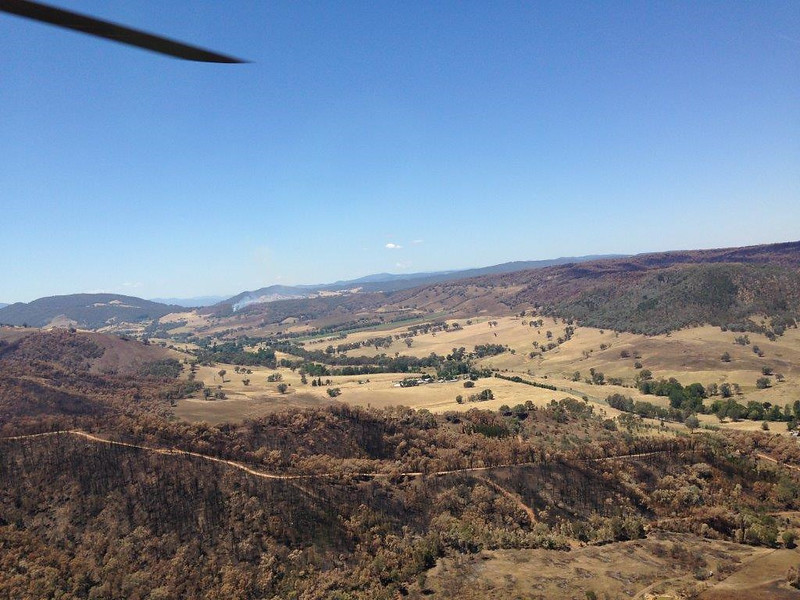 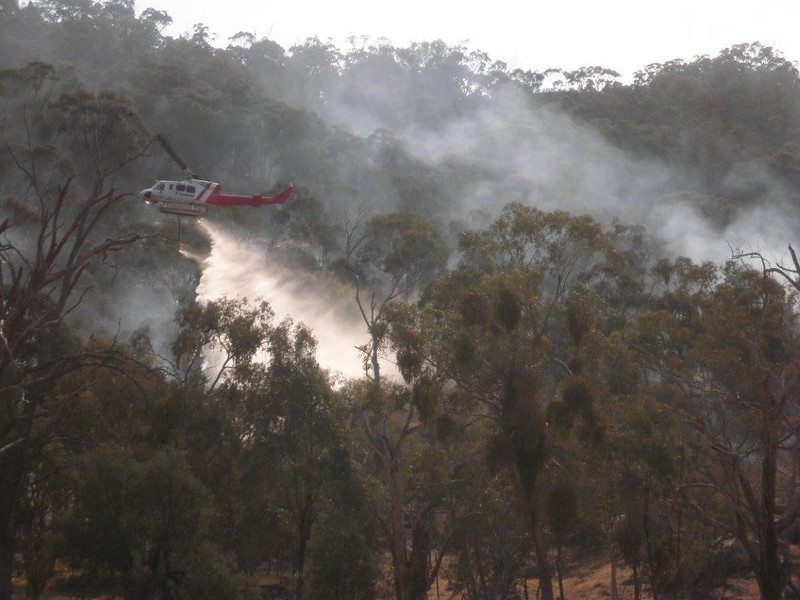 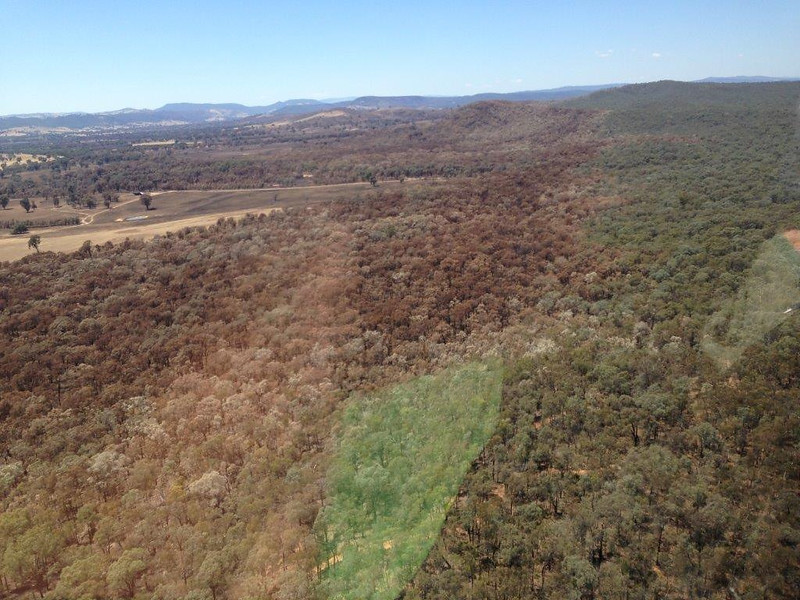 Over summer a few of us have taken advantage of any cool days to continue weeding the Grasslands block. Foliar spraying of briars and blackberries has proved very effective, though every  time we go there we see little briars we've missed. One setback was the discovery of quite an area of large briars in the north-east corner of the block close to Fishers Rd. They were hiding behind a big patch of hedge wattle and all are now treated. Fans of Bathurst Burr will be interested to know a few plants have sprung up in the infested area on the bank of the south west dam, so we will need to keep an eye on that.

One pleasing bit of news is that most of the nest boxes in Grasslands have been occupied by gliders, and two Sugar Gliders were found sleeping peacefully in one box. These boxes have only been up for five months so the need was there. Thanks to Mick and his team of conscripts!!

In January the shire offered us the services of the Green Army for a week. Since we could not use them in the park they were employed to remove Cootamundra Wattles, Peppercorns and other woody weeds from the roads close to the park. Thanks to Mick who co-ordinated this work with the shire and the  leader of the group. 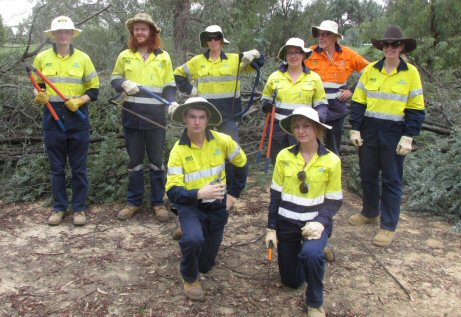 The project has come to an end. The interpretive signage has been ordered and we expect to have it erected in March. There will be a formal opening ceremony at the May meeting. This has been a huge project with hundreds of volunteer hours invested and valued support from Parks Victoria staff and field staff. I think we can be rightly proud of the transformation we have accomplished on this very valuable woodland reserve. Once more a great team effort and thanks to the working team. The ongoing maintenance and enjoyment of the block and its woodland birds and plants will be a pleasure. A quick inpsection this week revealed a large tree limb over our exclosure fence. Fortunately this only requires replacement of a steel dropper and wire straining. There has been an explosion of Horehound at the northern end where we have planted shrubs. It is easily pulled and this would be preferable to spraying. Some of the Peppercons had basal regrowth which was spot sprayed. There will be a working bee at the block in the coming weeks and interested persons will be notified. 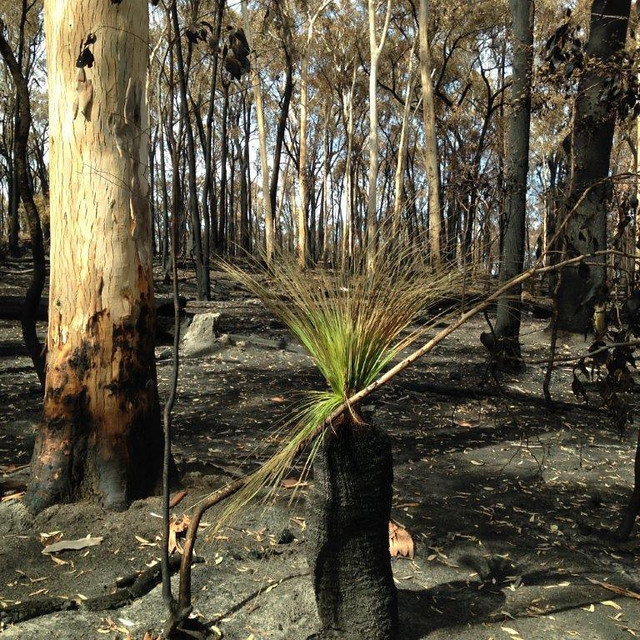 Preliminary work is underway to identify and remove dangerous trees and assessment and repair of damaged fences adjoining private land. Works to rehabilitate new control lines and repair roads in the Chiltern section of the park will commence in the next week. Assessment of impacts to assets, natural and cultural values is underway. A fox control program will commence soon to minimise their impact on affected native fauna.

Planning and preparation of planned burns is also continuing.

Duplication of the gas pipeline commenced on 8th February and areas of the park may be closed whilst works are undertaken. Advice on the operations has been provided to the community and operations planned to minimise impact to park users.

What an encounter! From member Jim O’Toole

On the night of 23rd January, my grand-daughter and I travelled down a track at North Prentice I had never been down before and were quite surprised at the number of Nankeen Kestrels and Brown Falcons we saw. They must have numbered about twenty each but as it was getting dark we had to give it away.

The following day I saw similar numbers in the early afternoon and that evening, my wife and I saw about forty birds, mainly Brown Falcons with just a few Kestrels and an enormous Wedge-tail. Once again the light beat us but the following evening, along with the grand kids, we approached the area from the Murray Valley Highway and in the space of about 2 kms we counted ninety-one Brown Falcons. Most of them were roosting in green trees and were almost invisible until they would explode out in mobs of fifteen to twenty. They would then start to hover over the stubble and I can only think that they were feasting on crickets and other large insects as there would have been no rats or mice given harvest was some months ago.

I have been out regularly since and whilst there have been large numbers on occasion, we haven't witnessed anything like we did that evening of the 25th. I can only think that the comparatively small local population (I have heard of mobs of ten or so in that area) have somehow communicated to their cousins that a feast was available. As these birds are sedentary I doubt that we managed to encounter a migrating mob but it certainly was a phenomenal sight. As the area is somewhat off the beaten track, the normal population is probably a bit higher than seen elsewhere but this was an exceptional experience and I am so glad that the grand kids got to see it with us.

Thankyou Jim, for sharing this  amazing sighting with us. 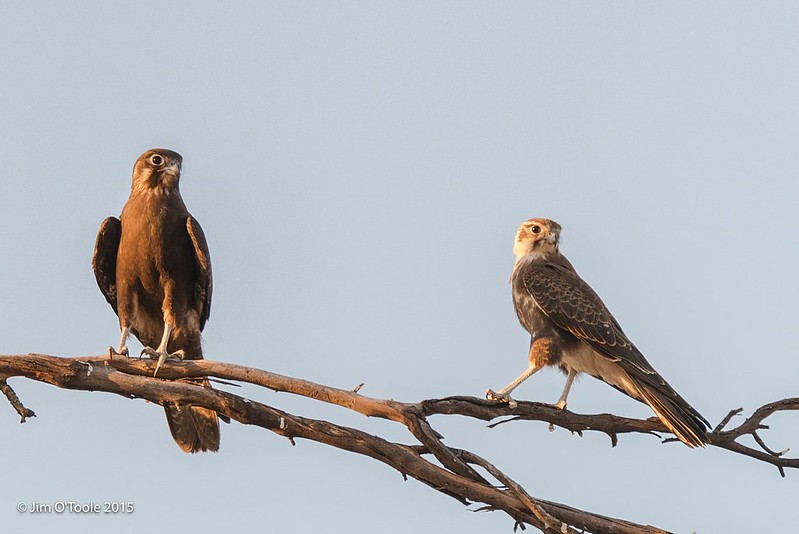 - irruptions may be regulated by dry periods; often leave areas during droughts

- irruptions difficult to detect because common in most areas

- may arrive or increase in areas with plagues of mice, locusts or crickets

Trust for Nature has received funding through the Victorian Government's Threatened Species Protection Initiative to assist private landholders to improve threatened species habitat in the Chiltern-Mt Pilot area.Trust for Nature is encouraging landholders in the project area to enter voluntary agreements to improve Hooded Robin and Squirrel Glider habitat and connectivity. As part of the project, Trust for Nature will carry out property assessments and provide landholders with laminated A1 (poster sized) maps of their properties. Trust for Nature will also arrange for the removal of top line barb wire and replacement with plain wire in areas with known or potential Squirrel Glider habitat on private land protected under a conservation covenant or a voluntary management agreement. If you are interested or would like to know more, please contact Will Ford on 0418 300 959.  Acting Regional Manager - North EastTrust for Nature     Mobile: 0418 300 959