Summer weather returned with a vengeance for our Christmas tea meeting at Valley No 2 picnic spot. The afternoon sun dropped into the western sky and the gum trees provided dappled shade as everyone gathered for the evening.

After some bird watching, conversation and afternoon tea, Karen Retra introduced us to the world of native bees.

She demonstrated how to construct  “Bee Hotels” as breeding sites for various species. From a short length of hollow stem like a section of bamboo, to pieces of timber varying in size with with a hole drilled in the end, the options are many for creating a “Bee Hotel”. Not all native bees nest this way, several species, like Blue-banded Bees make tunnels in banks. Blue-banded Bees are perhaps the most obvious of the native bees. If you have blue flowers, like lavender, thyme and teucreum you will almost certainly find these bees enjoying them as well as other species. If you are wondering about the sex of these bees  males have five blue bands on the abdomen while females have four. Have fun trying to count the bands as they are very active bees. Many of us went home keen to help native bees to multiply. 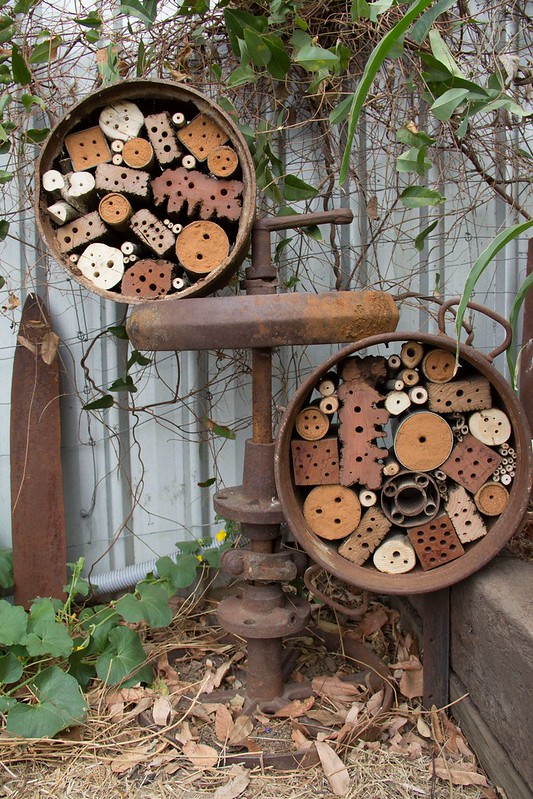 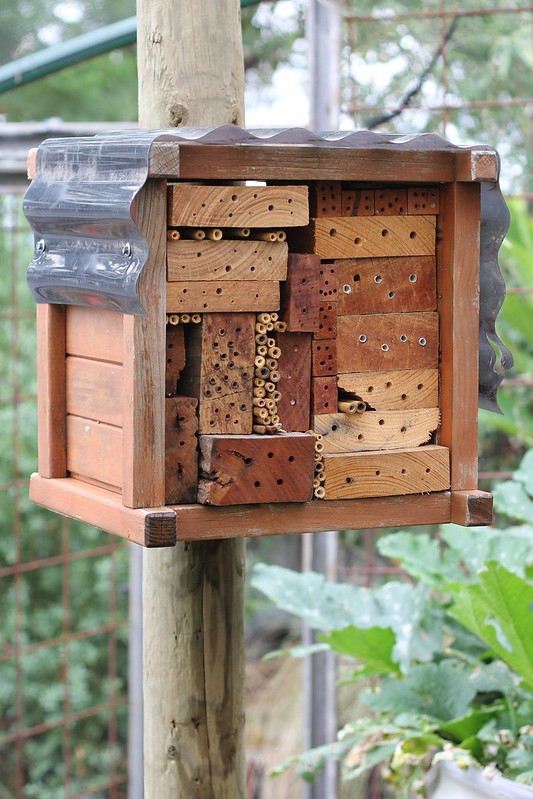 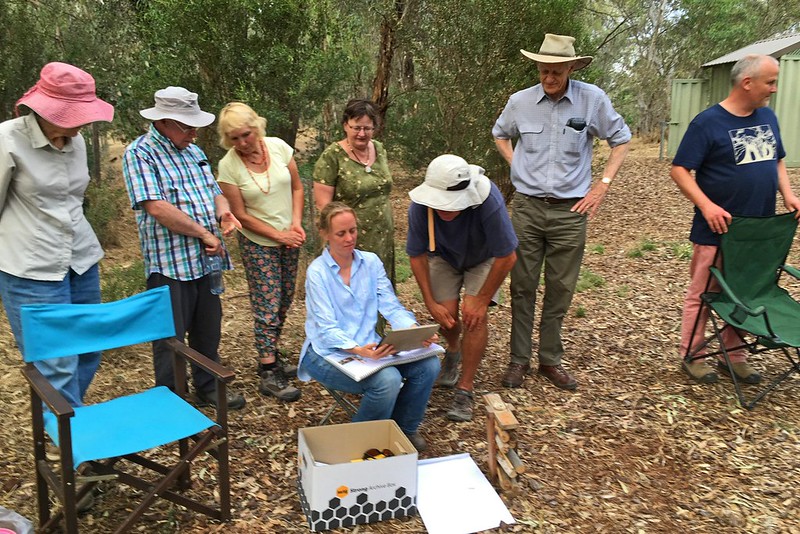 As a grand finale to 2015 a magnificent array of tasty dishes was enjoyed by twenty-five quite hungry participants.

Thank you to everyone who contributed to making the evening special.

Thank you too for your input into Friends for 2105 and compliments of the season to you all.

November rain topped up the park dams and freshened up the park. It is Bluebell season and a mystery to me how such delicate flowers can put on a display in the heat of summer. A few Pink Hyacinth Orchids, Dipodium roseum, are out and in the Pilot section of the park the  Horned Orchids, Orthoceros strictum, can be found.

While looking at some Neil and I noticed a Robber Fly close to a flower. A photo was taken and sent to Rudie Kuiter knowing that he was interested in pollinators of orchids. Rudie explained that this was no pollinator, it was in fact an ambusher! Its trick is to wait patiently for a pollinator to arrive at the flower and promptly make a meal of it! Such are the survival methods in the bush. 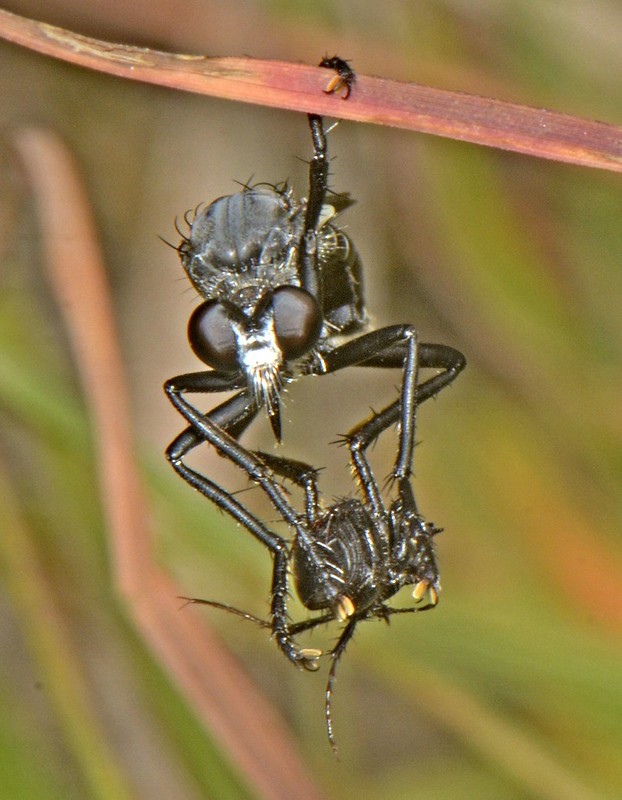 Birds continue to surprise us. Simon reported watching ten Superb Parrots fly over the edge of the park in November and bemoaned the fact that he had no camera. 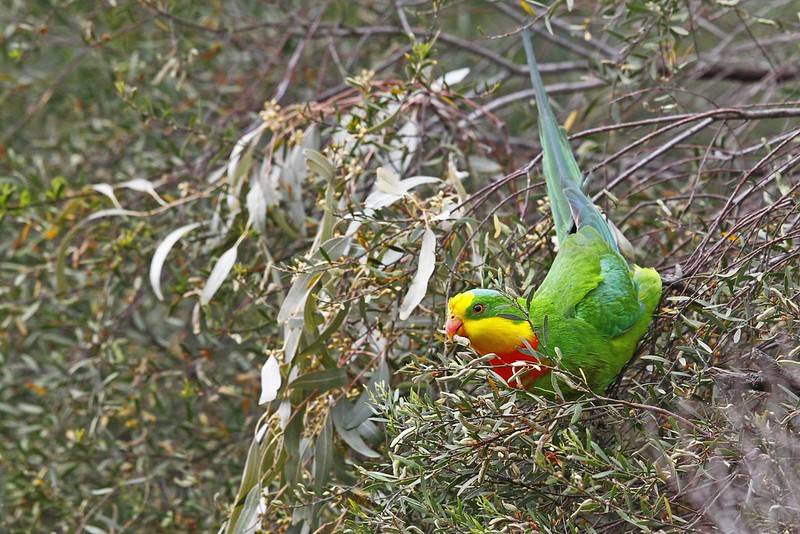 Thank you Neville for supplying the photo. It seems that Superb Parrots are extending their range as they are now being recorded as far east as Howlong. A party of Little Corellas, rarely seen around Chiltern, flew over my block. To cap it off  Simon, Jan Palmer and I  were on Pipeline Track where we heard agitated bird calls. Looking up there was a Brown Falcon flying over and in its talons dangled a long snake! Once again no camera but three observers. If the prey was destined for nestlings the feeding sight would have been very interesting.

Steven photographed a Gould’s Goanna Varanus gouldii on Mt Pilot.This was a great record.The state database holds only ten records of this beautiful ground dwelling lizard for this area and this was  the first from Mt Pilot summit. 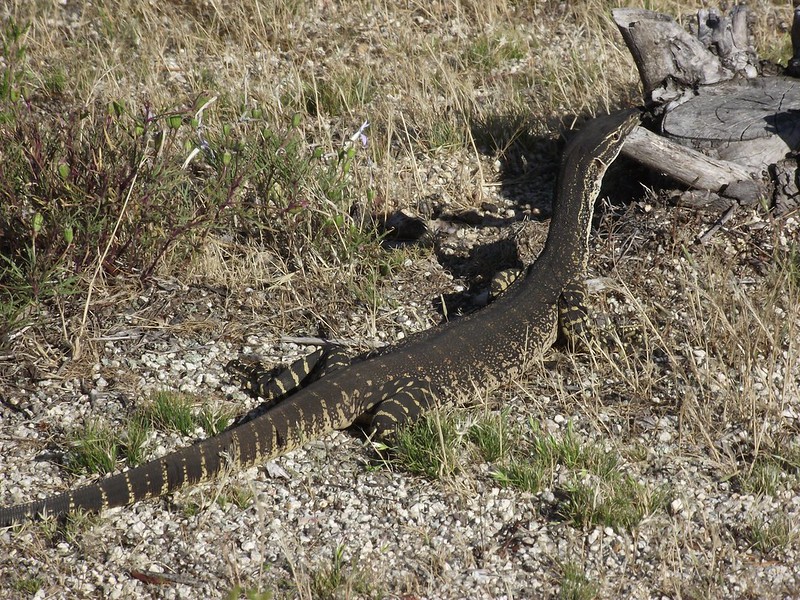 Jennifer has sprayed the rampant Vinca at Bartley’s Block and we await the result with interest as this is a very difficult weed to eradicate. Mick and Tony have spent several hours spraying the regenerating briars at the grassland block. It seems the slash and paste was not very successful as they resprouted. Briar, Cootamundra Wattle and sundry other weeds were spotted on Echidna Track and will be dealt with by the weed police!

The project has come to an end. The interpretive signage has been ordered and we expect to have it erected in February. There will be a formal opening ceremony at a date to be arranged. This has been a huge project with hundreds of volunteer hours invested and valued support from Parks Victoria staff and field staff. I think we can be rightly proud of the transformation we have accomplished on this very valuable woodland reserve. Once more a great team effort and thanks to the working team. The ongoing maintenance and enjoyment of the block and its woodland birds will be a pleasure.

Fire protection work has been undertaken around all the visitor sites. Walking Track maintenance has been completed. Other works are focusing on  preparation for the fire season.

Lightning strikes caused two small fires in the Pilot Reference Area and these were quickly dealt with.

Duplication of the north south gas pipeline is planned for 2016.  This will include sections through the National Park. We expect more detailed information in the future. In preparation for the work weed spraying  along the right of way has been undertaken. Seeds have been collected for the revegetation process which will take place in autumn.

There are only nine calendars left and they are at the Chiltern Information Centre. Anyone wishing to buy one can either call at the centre or phone an order in on 0357 261 611. If you need one to be posted contact me on 0357 261 484.