Dear Friends,
Well, we were destined for a wet day and the rain duly arrived on Saturday and continued throughout the night and well into Sunday morning. 33mm fell in just over 24 hours. Did that stop our determined team? Certainly not. Seven of us took to Bartley’s Block to check on the Caper Spurge and found 60 plants lurking in the sedge  patch. The Genista site near  the Indigo Cemetery  was the next target where we pulled or dug up 70 plants. On this site the animals had grazed the plants to ground level so we had to be diligent with our searching. That over, it was time for a late morning tea and a double share of  blueberry and custard lattice bun which is a Chiltern Bakery speciality. 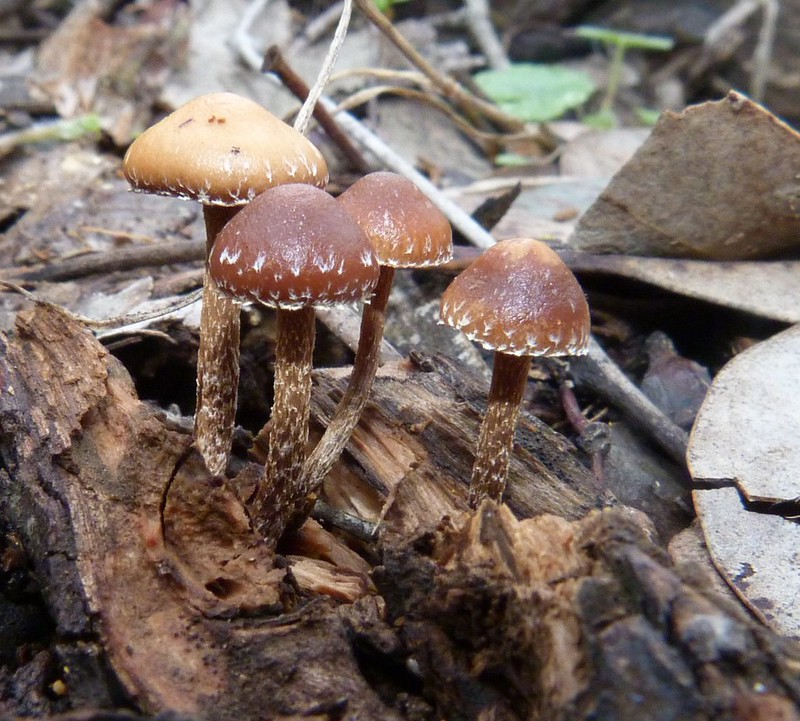 August is a month when there is a lot of interest at ground level so tread carefully as you seek out the Greenhoods  and other early treasures. The mosses, lichens and fungi are at their best in the damp conditions. The Cladia sp have soaked up the rain and swelled to cover many bare areas. 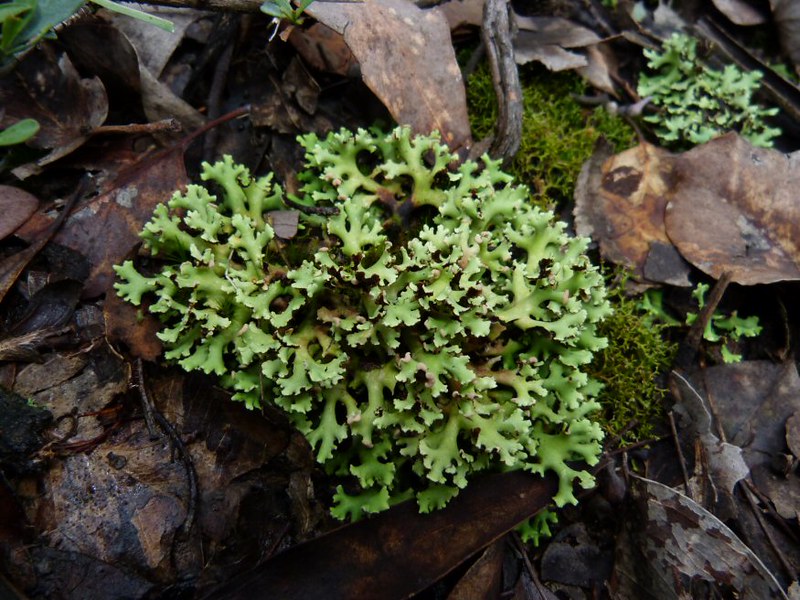 Fallen dead limbs and even old bricks, are sporting lichens and mosses. 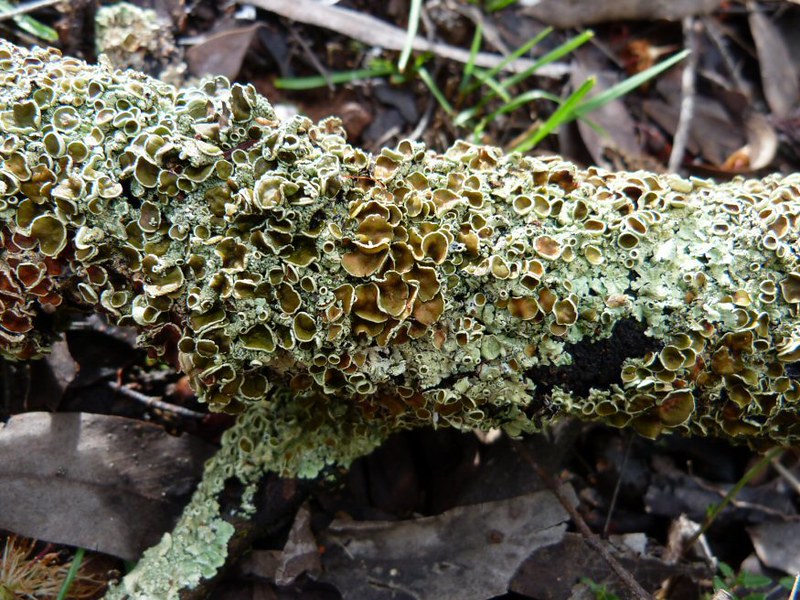 The Flavoparmelia sp  shown on the twig is fertile. A hand lens will help you to appreciate the intricacies of these lichens which, like fungi, help to break down the litter.
The wattles will be at their best over the next few weeks. Purple Hovea and some Happy Wanderer is adding more colour. Among the orchids are Pterostylis nana and nutans, the latter in some large clumps. Helmet Orchids are flowering and the tiny Gnat Orchids Acianthus exsertus are in bud.
Fungi are abundant and Coral Fungi is particularly bright at present. There are lots of hard to identify “little brown jobs” to borrow a birding term. 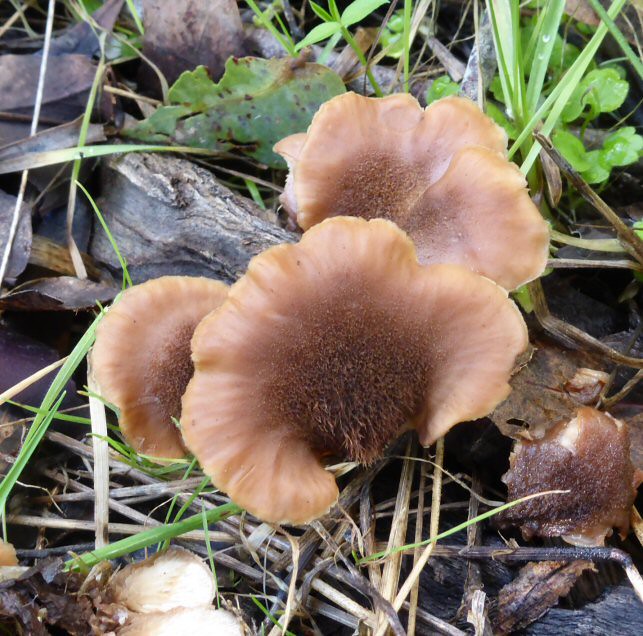 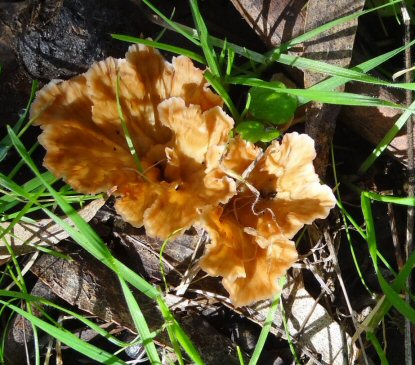 While searching for olives in the Mt Pleasant block I came across a Fleshy Mistletoe, Amyema miraculosa, growing on a Cherry Ballart, Exocarpus cupressiformis. This was something I have been looking for since Barry Trail found one in the 1990’s. There are 33 specimen records in the Herbarium but none record the host as Cherry Ballart. Mistletoe specialist Dave Watson sent me these notes: This is a rare combination.  This mistletoe shows quite an interesting pattern of host preference across its range, depending primarily on mistletoes (mostly A. miquelii) in eastern woodlands and forests, switching to sandalwoods (Santalum leptocladum / lanceolatum) in inland areas.  As far as I'm aware, Exocarpos spp are rare hosts across their range, so this is a noteworthy record.. A specimen has been lodged at the Herbarium.

The lovely little rosettes of Podoscypha petalodes, Rosette Fungus, are found at the base of trees and on roots. The Ragged-gill Fungus, Lentinellus aff ursinus  grows on dead wood and is characterised by its coarse dark hairs. Thank you for sharing the fruits of your fungi foray.

It was a good move to alter the working day as the replacement day was sunny and warm. Eight members came along for the day. Under Richard’s instruction the fencing crew got to work and within two hours the wire was in place. While that was going on several of us looked over the plantation and re-guarded a few plants. All the newly planted shrubs were fine and it was obvious that using the heavier stakes is the best option as no guards were blown off.
Meanwhile Mick and Helen went off to tackle the Boxthorns which had been GPSd. After a combined late morning tea and lunch we resumed the attack on ferals. Seventy Olives, all quite small, were pulled up and Boxthorn was slashed and poisoned. Fresh growth on past stumps was sprayed. This block has been under our care since 2006 and has been transformed from a woody weed plains block to an almost clean block. In the coming month the contractor will spray the thistles. Our next task is to do some further clearing up at the mine site now that the peppercorns have been removed. A small area will be planted out to soften the now bare area. Thanks to the Parks crew and our Rangers for getting the really heavy work done for us. 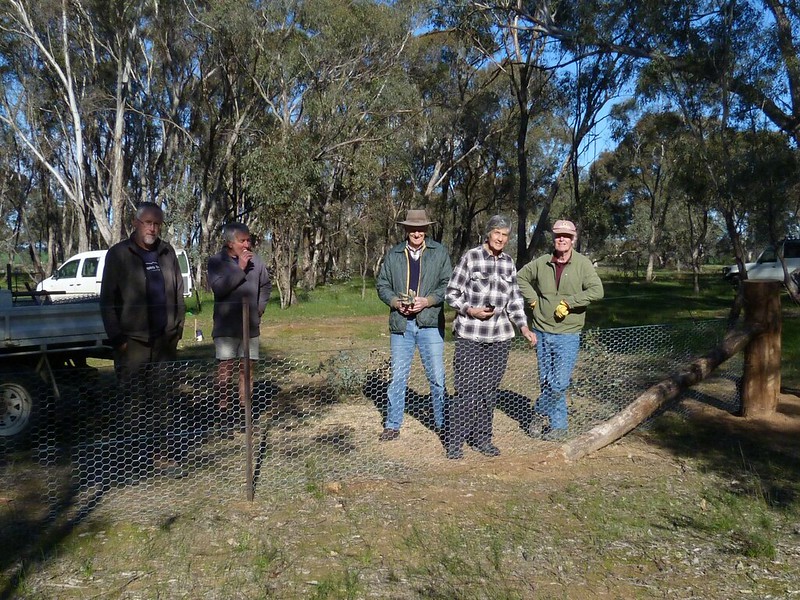 As we had yet to add the gate to the enclosure it appears a kangaroo has entered it and has caused damage to the very sturdy fence. A working bee is planned for Wednesday August 12th to plant the trees and construct the wire guards, fix the fence and search out and spray any stray Boxthorns. If you wish to come along please let me know.

A trial spray of a patch of Vinca ( Blue Periwinkle) at Bartley’s Block has been undertaken.  Several large clumps of Bridal Creeper have been tagged and sprayed.  Cootamundra Wattles are now in flower and are easily targeted. Please report any you see or if they are small just pull them out.
95% of the olives in the Reference Area-Coyles Track area have been re-visited and some re-treated. The rest will be looked as soon as possible. A few more visits will be needed to make sure there are no little ones springing up, or big ones fruiting. Mick and his conscripts have done a sterling job on the olive infestation. Thankyou.
Another plant, Acacia triptera, Spur-wing Wattle, has just been earmarked for removal from the park. They were planted back in the 1960’s by the then Forests Commission. The reasoning behind the planting was to establish plants beyond their limited range in the Warbys. The original four plants are on Skeleton Hill and in recent years seedlings have appeared in the gully leading down to Lancashire Gap Road.
July:As far as larger woody weeds in the NP ( at least North of Old Coach Rd) I think we have the situation well under control - Olives - probably none will fruit this spring/summer.Cootamundra Wattles - no large ones seen recently, small ones occasionally. Inkweed - none seen. A few other wattles have been seen and determined to be weeds, and disposed of. These include Acacia cardiophylla, triptera, pravissima and decurrens. The main job over spring/summer will be to keep alert and checking at least once on known infestations, especially of those Reference Area olives!
Chiltern Valley No2 is now free of woody weeds - peppercorns, briars and Ovens wattles!

Thank you Mick for this report.

To assist with monitoring please email Liz on:This email address is being protected from spambots. You need JavaScript enabled to view it.
The monitoring period has been extended until mid-September as fifteen more birds  have been fitted with  transmitters.  Any time you can volunteer for tracking would be appreciated.

Helen was a supporting member of Friends for many years. She and her husband Peter were members of  the Friends of the Warbys where they were involved in the establishment of an arboretum. That group closed some years ago as membership dropped.
Later  Helen took up the challenge of renovating Kaluna Park in Wangaratta and she, along with a determined  band of helpers and the Urban Landcare, created a weed free park and replaced many of the species that weeds had choked out. Helen was passionate about all things flora, had a meticulous style of data collection and reporting and was gently persuasive in conservation matters. Ill health took its toll and Helen passed away in June.
Helen’s contribution to the Warbys and the restoration of the local environment will be long remembered. This site shows the work that was  undertaken over the years.

This is the AGM day so there is no work. Meet at 3PM at the post office or go to Honeyeater Picnic area at your leisure for afternoon tea and a walk. BYO binoculars, camera and a chair. Later meet at the Senior Citizens Rooms in Conness Street at around 5.30pm for drinks to be followed by dinner at 6.15pm to be followed by a short AGM, and guest speakers.
Our guest speakers will be from Nature Conservation Working Group (NCWG), which is located in the Riverina District of New South Wales. It will take the form of  a presentation by Jan and Neville Lubke. The group manages a licensed private captive breeding and release program for Bush Stone-curlews and  this year they were very proud to release the 100th captive bred curlew into the wild.
.Note:  Curlews were once common around the grassy lanes of Chiltern township  but with the advent of development have now disappeared. 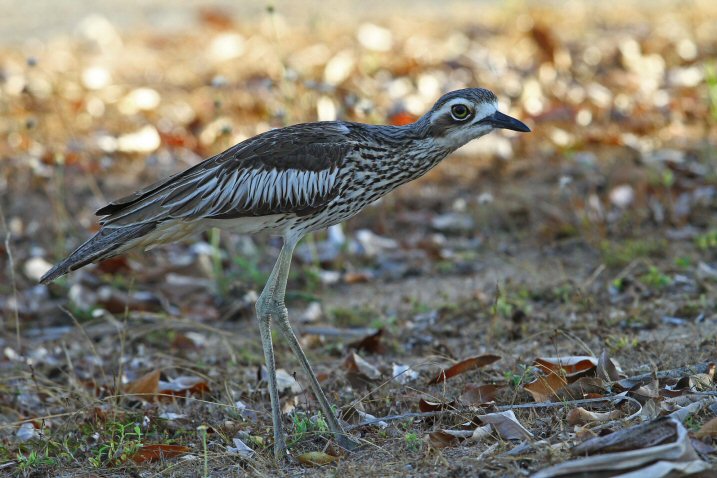 There will be nibbles and drinks while the meal is being prepared. Members are asked to bring a meal to share to supplement the  food we will buy. It would be helpful if members could indicate what food they intend to bring so that we can ensure a good variety. Thank you.
Contact in the field  0407 486 480