Dear Friends,
How lucky we were to have perfect weather for the mammoth task of reducing the Agave infestation. The task would have been extremely unpleasant under wet conditions. Eleven truly fantastic workers turned up to tackle the spread of this invasive plant Agave americana.
Happily the soil was loose and sandy which made removing the sometimes metre long underground runners relatively easy. However the removal of the big plants was another story. The combined efforts of shovels and manpower won in the end. The photos on the web speak louder than words. There were plants deep in an old mine hole and these were hacked and poisoned and time will tell how successful we have been. Meanwhile there are three huge piles to be dealt with. 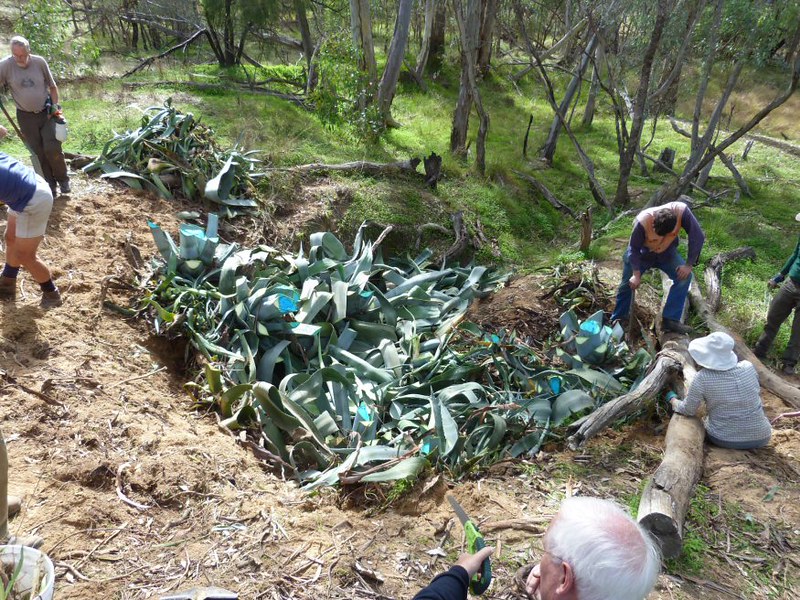 Native to Mexico it is reputed to take about seven years to flower.  However it obviously does not need to seed to spread as it does so by sending out underground shoots which root at nodes and send up a new plants. This site will need to be monitored for a few years for regrowth. 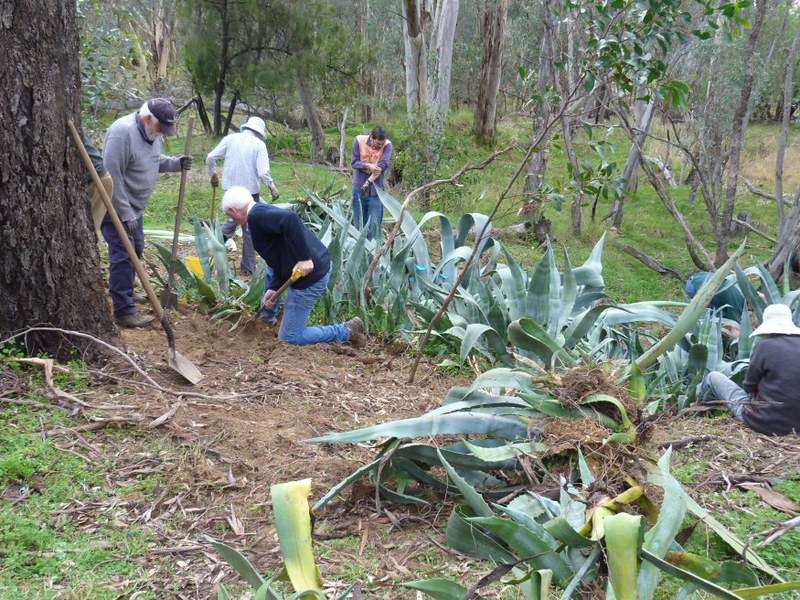 Usually after morning tea we progress to another task but this time it was simply recovery time before resuming the attack. After nearly three hours we retreated to a hilltop site to enjoy a well earned lunch. There is always interest at the lunch break and this time we enjoyed watching two Wedgetailed Eagles dipping and weaving to avoid the aggressive attack of some Ravens. A large flock of Dusky Woodswallows was hawking insects in the balmy weather.

Closer to the ground an interesting insect was spotted on a grass stem. Thinking it would not be around too long cameras came out in haste. Neville captured some exquisite photos of a Mantis Fly, Campion rubellus. These beautiful insects have delicate wings and large fascinating eyes which Neville has captured beautifully.  With their barbed forelegs Mantis Flies are fierce predators of small prey. 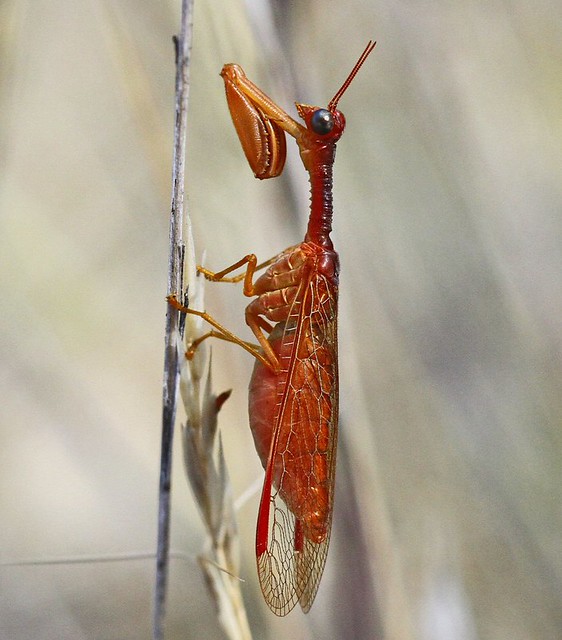 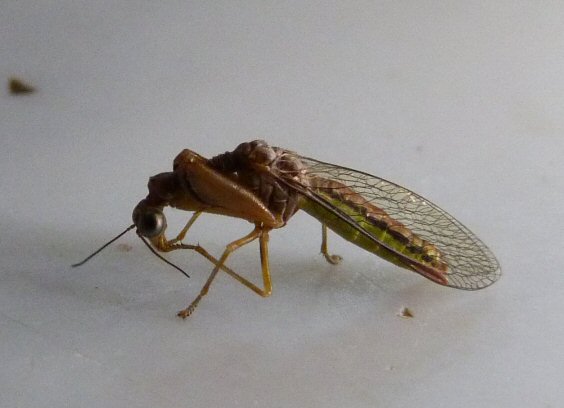 Briar Rose, Cootamundra Watttle and Hawthorn were removed from an outlying block of the park.

Joseph and I surveyed the Coyles Track olives on Monday 27 April with a generally good result - most large trees appear to be suffering satisfactorily, although some will need more treatment over the winter and spring. It appears to be essential to treat ( either drill or chip with hatchet, then fill with strong glyphosate) at least every 10cm around the base of the large trees to ensure that some branches don't continue growing.  Individual branches need to be treated further up the tree. Very few new sprouts were found. A further survey will be carried out in a couple of months. Thanks again to all who have helped on this project!

The replacement shrubs are on hand and ready to be planted as soon as we have some significant rain. Now scheduled for the June meeting after the recent rain. The fencing of the exclusion plot will commence as soon as the holes are bored. A list of the plants present in the proposed enclosure will  be made.

The recent rain event has re-awakened the park. Orchid rosettes are appearing, there are a few fungi about, wattles are in good bud and the Ironbarks are flowering well. One can tell where it is best by the noise of the Friarbirds. The White Box is flowering in patches and the Grey Box is on the wane. Most of the released Regent Honeyeaters  have remained in the quarry block where the Ironbark blossom is still producing well but as always there are a few more adventurous ones which have wandered over the park. Close to the Pilot section of the park Joseph recorded bird sightings on May 9th  of  a flock of 100 White-naped Honeyeaters, a flock of 20 Diamond Firetails and two White-backed Swallows. I wonder have the migrating White-naped Honeyeaters have arrived to feed on the Ironbark and White Box. It will be interesting to see if flocks are recorded during the Regent tracking. 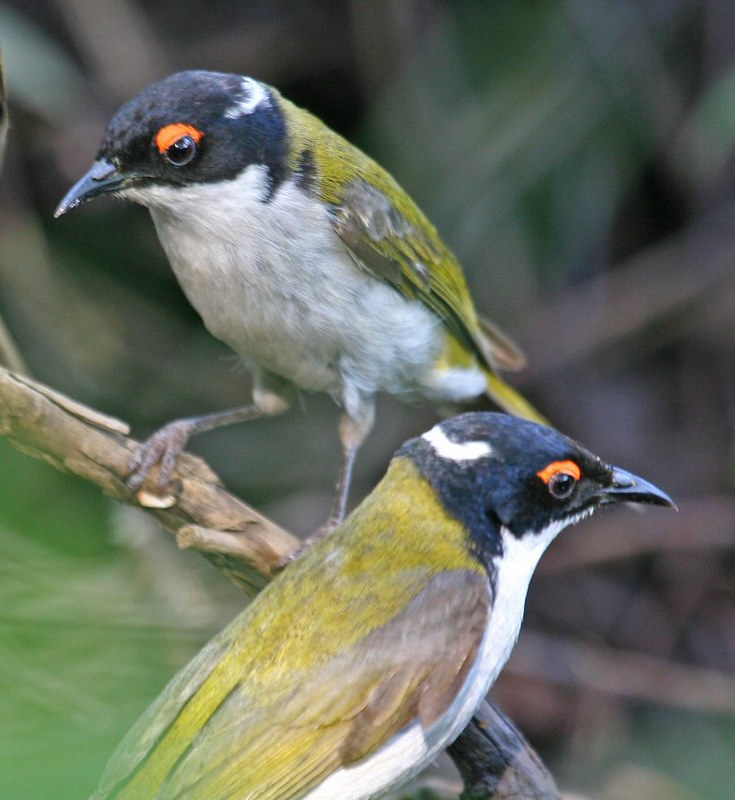 To assist with monitoring please email Liz on This email address is being protected from spambots. You need JavaScript enabled to view it.

Bringing Back the Brolgas 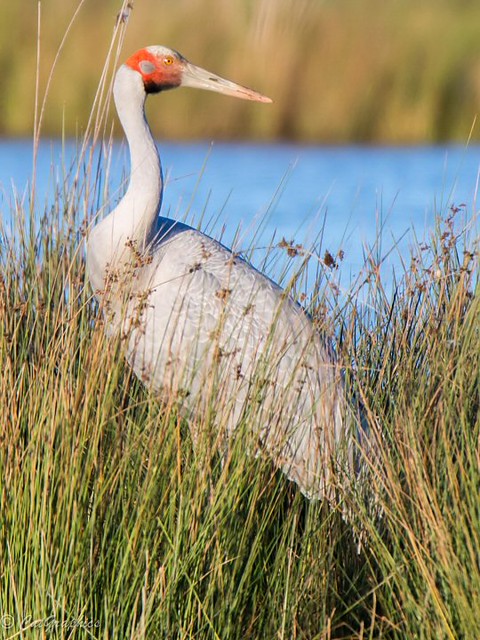 I had the pleasure of attending the Bringing Back the Brolga Master Class on April 20th in Rutherglen. Inka Velthiem, who is studying Brolgas for her Phd, talked us through Brolga basics: habitat requirements, life cycle, populations, movements, and protection. It was particularly interesting to hear her stories from the field and the challenges she overcame, getting GPS units onto the birds to start with! The GPS tracking revealed Brolgas daily movements between adjacent wetlands, as well as larger seasonal movements between breeding sites and flocking sites. This re-enforces the importance of conserving a range of wetlands across the landscape, and understanding that a whole of community approach is required to protect the species. After lunch we headed out to put our knowledge to the test! We visited a number of local wetlands, many blending into surrounding paddocks, discussing the pros and cons of each site for Brolgas and how they could be managed to provide better habitat. A highlight was all the great conversations and stories that were shared over the day. A big thankyou to the  North-east CMA, Trust for Nature and Jennifer Davidson (Rutherglen Landcare) for organising such an interesting event. Joseph Birckhead. Photo courtesy of Jim O'Toole.

Matt Herring and his colleagues have already obtained amazing information about the movements of these birds. Visit the Bitterns in Rice  website to follow the amazing  progress of  “Robbie” the satellite tracked bird! http://www.bitternsinrice.com.au

Banksias and She-oaks are disappearing from our woodlands and roadsides 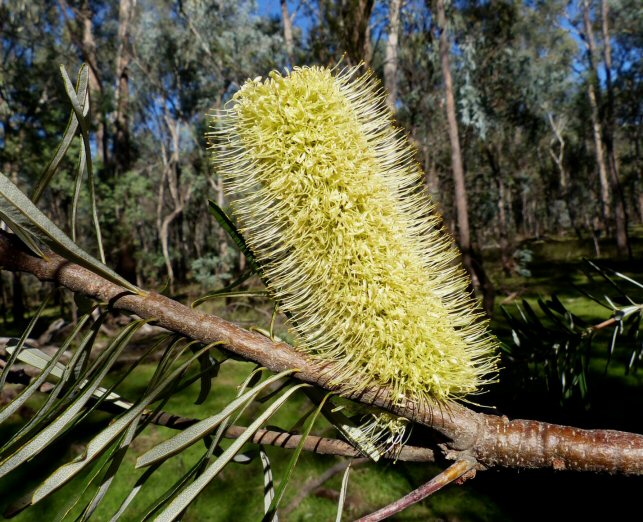 A really interesting post by Ian Lunt on the disappearance of banksias and sheoak from woodlands can be read at :
http://ianluntecology.com/2013/10/13/forgotten-woodlands-future-landscapes/

"The best thing we can do for nature is simply spend more time in it.From there, reverence grows and action flows.”
M. Herring  2013

Meet at 9.00 am at the post office.  BYO all your needs, lunch, binoculars, chair. Planting at the Rutherglen Block.
Bring your favourite planting tool and a rake if you are able to. We have some minor rubbish residue to tidy up.
Contact in the field  0407 486 480

Friends Facebook Group now has 130 members - from the site: