Dear Friends,
On a pleasant autumn day fourteen members turned up to our delayed April meeting. The main activity was nest box monitoring, while some went to check on last year’s Cootamundra Wattle site to look for new plants and others went to the Rutherglen Block. Thirty nest boxes were checked and of those nine had animals in residence. It is not unusual to find lower occupancy in the warm months. A Tuan was found in one of the original boxes (circa 1990’s) on Slaughteryard Gap. A new set of boxes was erected there some 5 years ago and this was the first record of use in that area. It was decided to relocate all but one of the boxes, leaving one new box close to the Tuan’s somewhat dilapidated box.
Morning tea was a little late so we had an early meeting. Members decided to make three additions to the park facilities. We will provide a seat at Bartley’s Block, a picnic table for the Tuan Campsite and an extra interpretive plaque for the White Box Walk. The plaque will interpret one of the puddling circles from the gold rush days and enhance the visitor experience.

Birds of the Day

Phillip recorded: Duelling male Scarlet Robins with a female nearby, 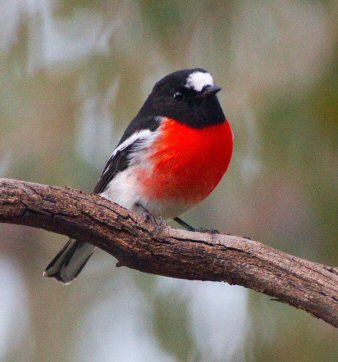 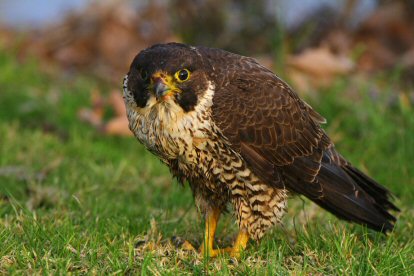 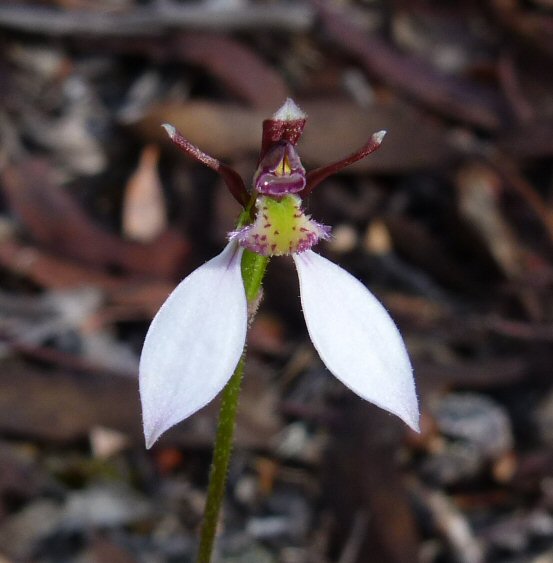 We are still finding small Cootamundra Wattles. The Brick Kiln Track site and Pipeline Track will need to be inspected again to catch any seedlings. Inkweed at Depot Dam and surrounds is another site to keep an eye on.
There is an expanding patch of Aloe in the block along the Howlong Road which we will target at the next meeting. 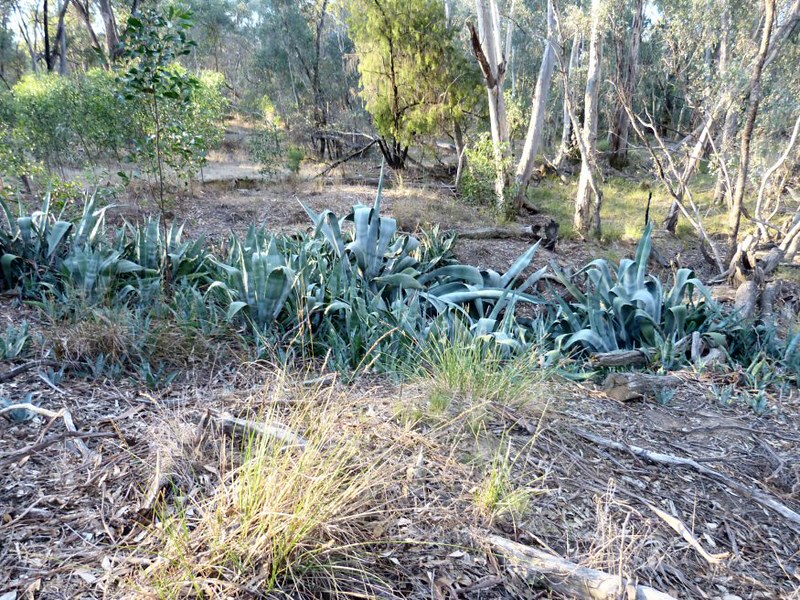 The plan is to remove all the surrounding small ones to minimise the spread. We will also be relocating a set of nest boxes which have not been utilised, so there will be plenty to keep us occupied.

Opuntia stricta infests the Eldorado section of of the park. We can count our blessings that it does not like our Chiltern soils! The first plants, along with the original Cochineal insects, came to Australia with the First Fleet to start a cochineal dye industry.The control of this horrid spiny plant is difficult. Presently the Cochineal insect Dactylopious opuntiae, specific to this species, is hard at work. The Cochineal insect sucks the moisture from the cactus and we saw evidence of this while in the area. The destruction process is very slow.
The female cochineal insect is a soft sac, sheltered by a silky white covering. 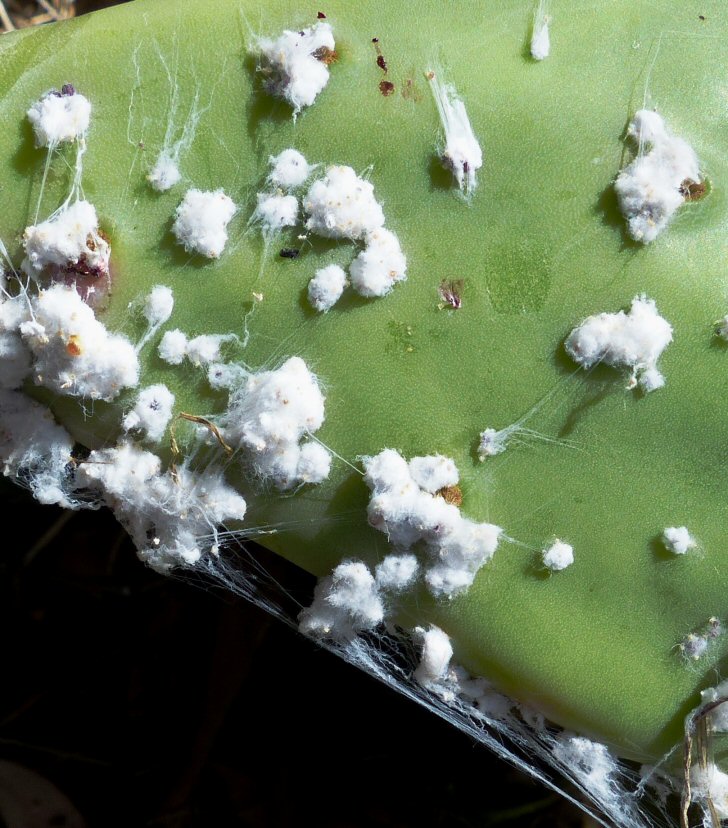 The male is tiny and two-winged. The female may produce up to 1,000 offspring in warm weather. The eggs hatch into tiny crawlers which move to find a new plant. Movement may be by crawling, wind dispersal or by attachment to an animal.

Olive report for March from Mick

Finally after 8 months work by many Friends we can say (touch wood, and E and OE) that  all the olives in the Coyle’s Track/Ridge Track area have been treated. 50-60 large trees have been drilled and killed, 300 or so smaller bushes have been cut and pasted, and maybe 3000 tiddlers have been ripped out. About 300 hectares of (often very steep) forest have been surveyed and olives mapped. The last two trees were drilled on 25th of  March near Oates Track well north of the main infestation.

Now the task is to do occasional sweeps in infested areas looking for large trees trying to struggle on, and small ones springing up. After 6-8 weeks it will be obvious if we have missed anything. There are also a few olives in the Lappin’s Track-Donchi Hill Rd area to be checked on this autumn.

My personal thanks to all the volunteers who turned up on field days and mid-week - I hope you all feel a great sense of accomplishment! My thanks to Mick  for taking on the organisation of this huge project. During March alone 105.05 hours were dedicated to olive removal.

The rubbish piles which the students from Wodonga Secondary College helped to organise  have been removed by the contractor. The large hole will be fenced and signed  by Parks until they can deal with it. The plantation plots were infested with young thistles and Jan has targeted them. The St John’s Wort will be sprayed at growing time.

The survival rate of the plants was about 60% so we will fill in as soon as the Autumn break comes.
The dead tree piles near the mine site will be cleared by Parks and after that happens Friends will clean up the area around the mine relics.

We had plans to fence out the revegetation  plots but after inspection and discussion, Joseph suggested we create an exclusion plot  to monitor the effects of the herbivore pressure. This was agreed upon and a site was selected that was in an open area and which supported small plants such as  lichens, daisies, glycine and the Black-tip Greenhood. A 60X40 plot was marked out and Richard has agreed to manage the fencing project. Parks will bore the post  holes as soon as the weather breaks. This action is a better use of the grant  money.

Our guest speakers will be from Nature Conservation Working Group (NCWG), which is located in the Riverina District of New South Wales. It will take the form of  a presentation by Jan and Neville Lubke. The group manages a licensed private captive breeding and release program for Bush Stone-curlews and  this year they were very proud to release the 100th captive bred curlew into the wild.  They also undertake an extensive promotional and educational campaigns to encourage the general  public and local landholders to get involved in habitat conservation and predator control to help protect these iconic birds, which are endangered in our part of Australia.
Note:  Curlews were once common around the grassy lanes of Chiltern township  but with the advent of development have now disappeared.

Fun and Games in Nature

Recently I heard an extremely loud buzzing noise in the garden and to my good fortune the maker of the noise, a Robber Fly, perched on a stake nearby.  With more good fortune it stayed there until I got my camera. These large flies are serious predators in the insect world and in sharing this photo with ranger Brian he told me he had taken a photo of one that suffered a surprising fate. It was a case of “Come into my parlour said the spider to the fly”. Brian captured two amazing photos of  a Garden Orb Spider efficiently wrapping a four centimetre long Robber Fly with web. 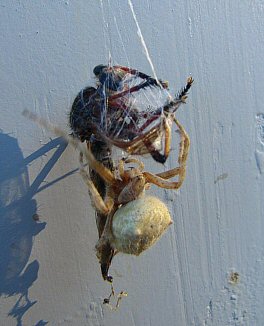 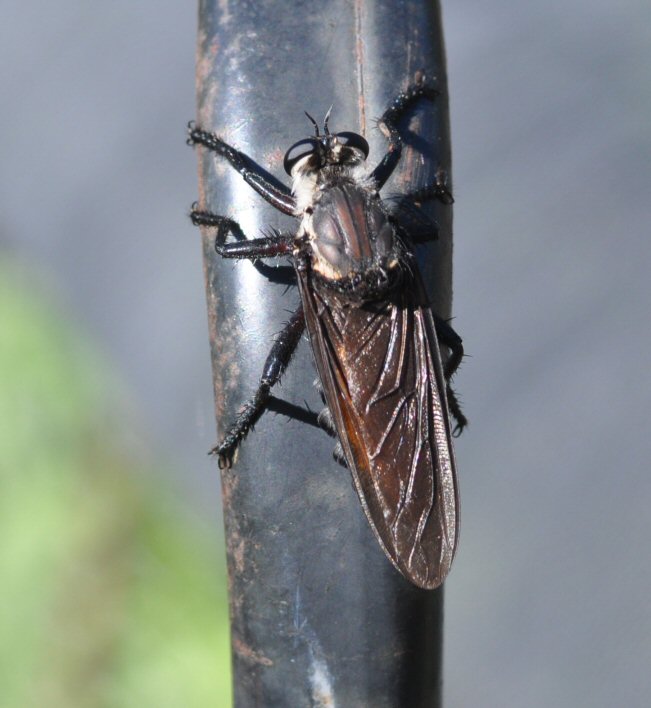 Robber Flies suck the juices from their prey and this one was in line to have its juices sucked out by the spider. 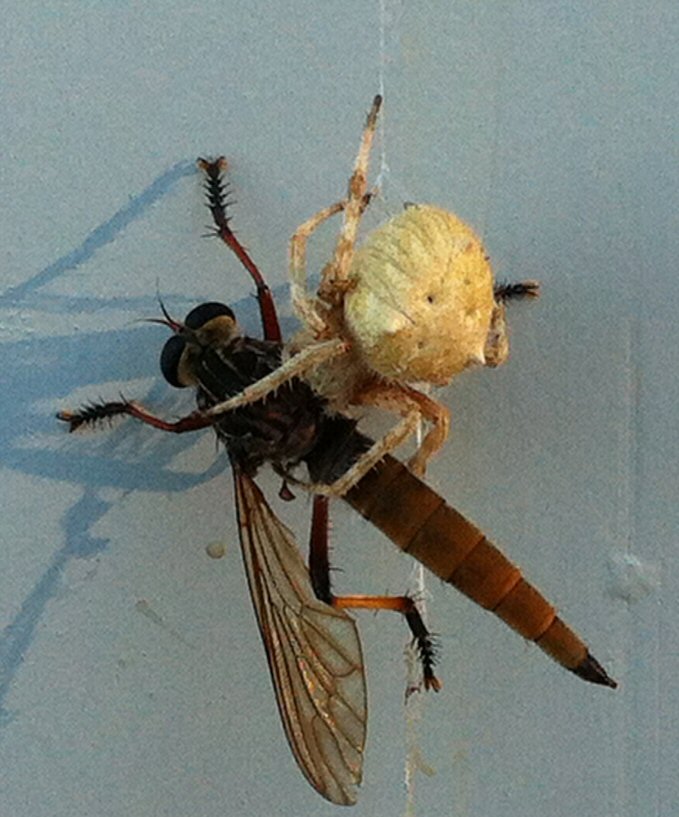 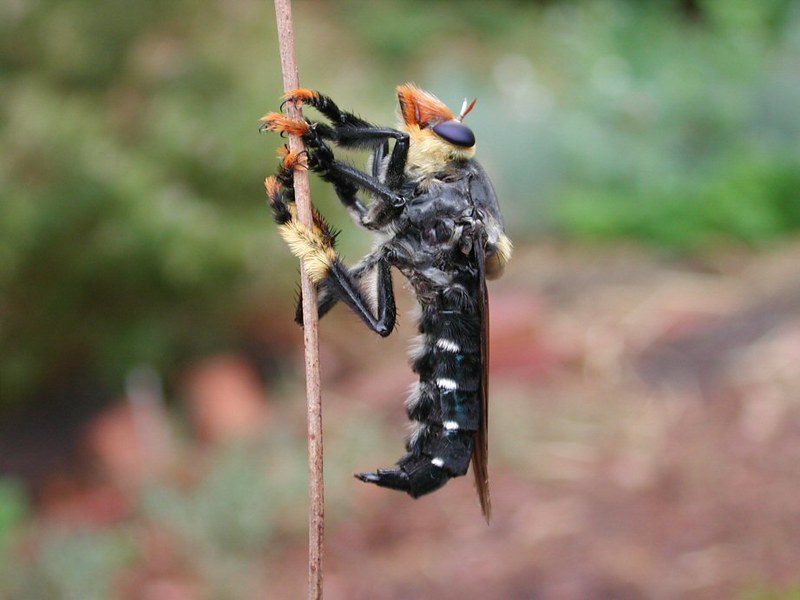 The dry conditions have meant the best birding spots have been around the dams. The Grey Box and Ironbark are now flowering throughout the park. Noisy Friarbirds moved in in early April and were quick to find the Grey Box flowers. With the release of the Regents there will be extra special birds to spot! Grey Butcherbirds have been very vocal and have moved to the town edges. Once uncommon they have increased in number and spread. Jan captured a juvenile Pied Butcherbird near Wangaratta. 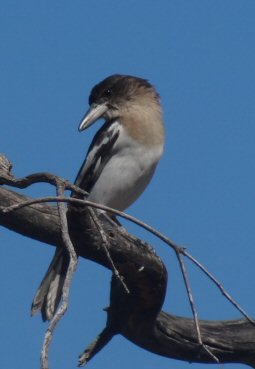 Controlled burns will be carried out in various parts of the park over the coming months.

The first batch of captive bred birds were successfully freed on Tuesday 14th. The second batch will be released on Saturday  18th April. If you wish to assist with monitoring please email Liz on:  This email address is being protected from spambots. You need JavaScript enabled to view it.

"The best thing we can do for nature is simply spend more time in it. From there, reverence grows and action flows.”
M. Herring  2013.

NEXT MONTHLY MEETING SATURDAY MAY 2ND 2015

Meet at 9.00 am at the post office.  BYO all your needs, lunch, binoculars, sunscreen, repellent. Removal of Aloes and relocation of  a set of nest boxes is planned. There will be plenty of work for everyone. Bring a digging tool that you are comfortable using for a very DEstructive activity!
Contact in the field  0407 486 480