Dear Friends,
Once again the weather intervened and caused us to cancel our working day. A mid-month  meeting has been scheduled for June 15th. Details below.
Weeds in the Mt Pilot section of the park have been targetted in the past few weeks. Inkweed has been the main focus and along the way odd fruit trees, Ash and feral wattles have also been removed. These weeds are mainly found within fifty metres of roadsides. Inkweed plants look daunting at first glance but in fact the plant comes from a main stem and once located it is easily cut off and pasted. 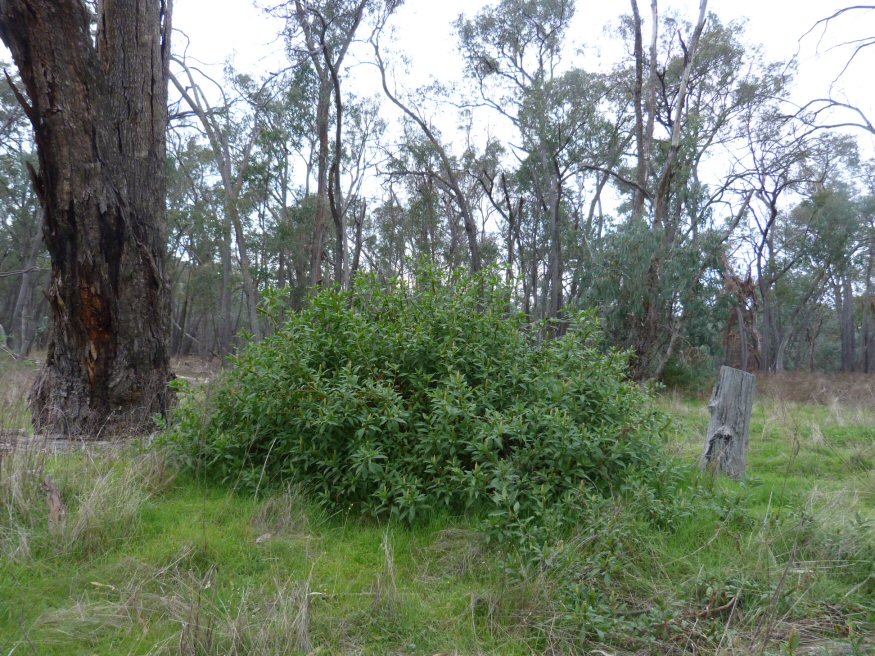 Mid-month work at Rutherglen Reserve. On May 17th  members of  Friends and twelve students from Wodonga West Senior Secondary College assembled  at the reserve ready to tackle the piling of the massive amount of rubbish which had been deposited over the years. It was a case of many hands made light work and the removal of the piles by machinery has been made much easier.

As usual we had the customary bun and morning tea before setting out to inspect some of the nest boxes. However some surprises were in store in the form of two super large Brown Snakes.

The first was encountered sunning itself in a depression and the group was able to stand and admire it before it slithered into a rabbit burrow. The students collected the shed skins and we all marvelled at the size of the reptile estimated at two metres long. The second one was equally large but much darker in colour and, as at the first site, there were many skins.
The nest boxes yielded all three expected species, Sugar and Squirrel Gliders and  Brush-tailed Phascogale.

Our thanks go to teacher  Matt Weekes and the students for their input to our project.

The areas to be planted out have been sprayed and when the site is ripped we expect to plant in June.
There were nice patches of the River  Bluebell, Wahlenbergia fluminalis and some flowering Vittadinia Daisies.

Around the Park: The mild dry conditions are over. Good falls of rain along with mild conditions have
resulted in the early flowering of many species. Showy Parrot Pea, Karalla and Diggers Speedwell are all sporting a little colour. Ploughshare Wattle is out and by the end of June we should be seeing the first Golden Wattle flowers.

There are still a few Autumn  Greenhoods to be found and rosettes of other Greenhood sp are plentiful. The conditions are good for fungi so have your camera with you if you are in the park. Photos are very welcome for the website, so please contribute if you can.
Honeyeater  picnic area has a Rose Robin as a winter resident. The sewerage ponds surrounds at Teal Track is hosting Diamond Firetails and Robins. At present Orange-winged  Sitellas are common in the Grey Box areas.
From the Ranger’s Office: Grading of tracks has been completed. Contractor is currently spraying Bridal Creeper. The 1080 fox baiting has been completed. In one week 30% of the baits had been taken up. General maintenance of visitor facilities is being undertaken.
Regent Honeyeater survey weekend:   May 17th and 18th. An enthusiastic band of birdwatchers scoured the park for these elusive birds. Teal Track area turned up one brief sighting and Oates Track produced another.
Several people recorded Swift Parrots. The benefit of the Saturday search was the sighting and photographing of  juvenile  Olive Whistler by Lyla and  John Hansen from Queensland.

pic courtesy John Hanson. This sighting produced a new species for the park list. Congratulations Lyla and John.
Greenhill Dam is worth watching over the next few months. Swift Parrots have been seen bathing there.

**MID-MONTH MEETING SUNDAY JUNE 15TH
Planting of of trees and shrubs at the Rutherglen block.
We have over 300 plants to plant.  The areas have been ripped and sprayed. If you are able to contribute some time please let me know. We will meet at the Post Office at 9.00am. **Those who know the site can go to the southern entrance for 9.30am. BYO trowel/gloves/and any other needs. Bun will be provided for morning tea.  Contact:  0357 261 484 or 0407 486 480  Many hands will make light work.

NEXT MONTHLY MEETING SATURDAY JULY 5TH
Meet at the Chiltern Post office at 9.00am. Bring lunch, chair, binoculars. The activity will include nest box monitoring. Contact in the field  0407 486 480