Dear Friends, On a beautiful sunny April 6th eleven Friends ventured to the Rutherglen Block. Using a grid formation on the southern end of the block, the "disciplined" troops removed rubbish, hundreds of Olives, Olea europaea, by pulling and digging or cut and poisoning , and Bridal Creeper, Asparagus asparagoides. 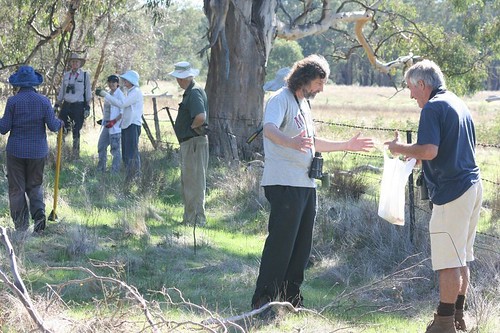 Another woody weed noted was the African Boxthorn, Lycium ferrocissimum, with both bee attracting flowers and fruits 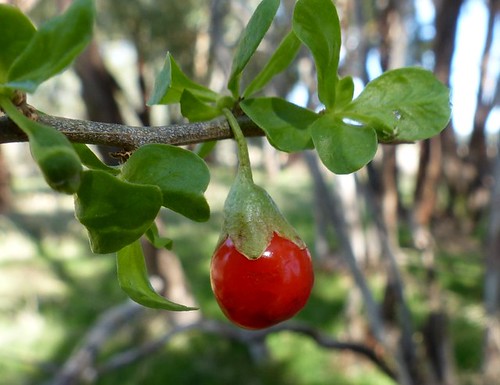 Nest Box inspections revealed all boxes being used by Tuans and gliders. During these activities 28 species of birds were noted including both Rufous and Golden Whistlers, Dusky and White-browed Woodswallows, Bronzewings, Jacky Winter, Grey Butcherbird, Western Gerygone and Wedge-tailed Eagles. Variable Glycine (Glycine tabacina), was flowering throughout the block 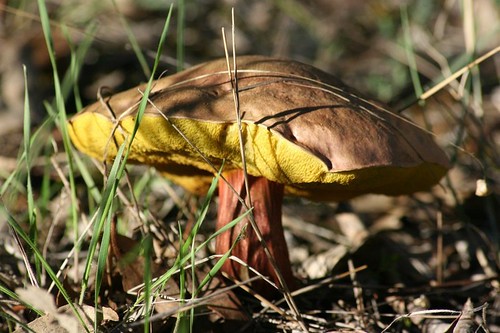 and the fruiting heads of Blue Devil, Eryngium ovinum, were found. Following recent rains the fungi were making an appearance and a mob of 30 plus kangaroos did a hop-pass to celebrate the fresh vegetation. A lovely day was had by all, even though there was a very large brown Snake in the grass 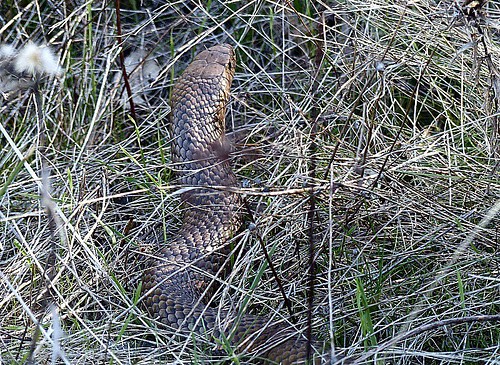 Thank you Neil for this report.

Of Red-browed Finches and feathers

An observation by Jan and Jenny of Sandy Creek. Jan reported that there were flocks of Red-brows breeding in March. After consulting her bird book to see if breeding was normal for that time of the year she also read that these finches have a preference for white feathers to line their nests. Here is her report:

“The finch food supply certainly is plentiful, with weeping grass, windmill grass, austrostipa scabra, austro. elegentissima, poa sieberiana, p.labill., bulbine lilies, (and more!) in the house yard; and then there's the nursery where we let more grasses seed so we can collect seed ourselves,sharing of course, with these little tigers, they're into everything! (even our wattle seed, which we germinate outside). I've noticed in the last couple of days a number of Red-browed finches making new nests. Checked my Readers Digest bird book and it said those in the northern part of Australia may mate up till April or so, but not down here. Have you noticed any other birds with the same behaviour? I plucked some dog fur from our old red heeler, Dusty, and put it in an obvious spot for the birds thinking they'd like this for the lining. But since read that they like white feathers to line the nest - having breakie watching them this morning, and guess what? Yes - they turned up with white feathers from the chook shed. So we carried out an experiment with the finches and feathers - setting up brown, grey and white feathers all together and secured by a twig and placed at the base of their nest. Within an hour the grey and white had disappeared, with only the brown remaining. So, they're certainly not colourblind.”

A new plant for the park turned up on Chinese Track, Spiny Satlbush, Rhagodia spinescens. It has been added to the herbarium records. It is on the extremity of its range. Weedophobe Mick has been very active targeting Olives and Peppercorns on Chinese Track, Donchi Hill , Valley No 2 Dam and Teal Track. Boxthorn on a boundary track off Ryan’s Road was removed and a patch of Bridal Creeper tagged for spraying. On the bird front things are changing. Michael reported Swift Parrots 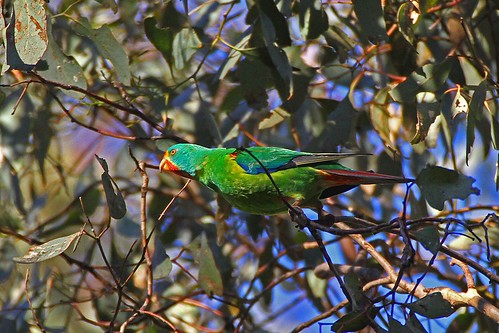 and a White-eared Honeyeater at Bartley’s, a Black Honeyeater at Lappin’s Dam and some Blue-winged Parrots near the Rutherglen Transfer Station. The latter have been recorded in the park in the past during Autumn and winter. The 100mm of rain which washed the district has topped up both the Valley and park dams. Orchids to look out for are the dainty pink Parson’s Bands, 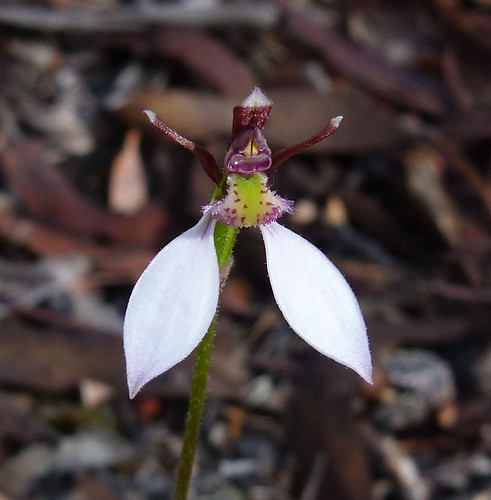 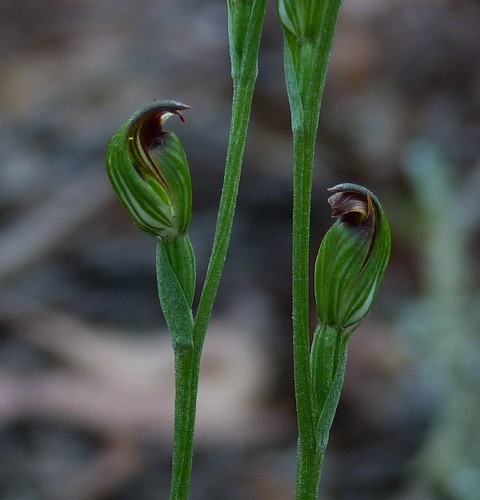 and if your eyes are good you may find some Midge Orchids of the Corunastylis species.

The pale yellow winter wattle Acacia ulicifolia is in flower and along Settlers Road the banksias are flowering. There are Regent Honeyeaters in the district with one unbanded bird being spotted and photographed. It was amongst a flock of Noisy and Little Friarbirds near a Rutherglen Winery. All the birds were hawking insects. Please keep a lookout for these flocks of friarbirds and the possible presence of a Regent or two.

NEXT MEETING: SATURDAY MAY 3RD

Meet at Chiltern Post Office at 9.00AM. OR if you know where the Rutherglen Reserve is located be at the southern entrance off Research Station Road 9.30 am. Byo lunch, drink,binocs, chair etc. Activity : Continuation of Olive removal. Handy tools: saw secateurs.gloves. Contact in the field : .Eileen 0407 486 480