FRIENDS OF CHILTERN PARK
Convener E.Collins 057 261 484
Newsletter No 14 October 1994
Dear Friends,
As we gathered at Donkey Hill picnic spot each of us became aware of the absence of spring birdsong, the scarcity of wildflowers and the general drab appearance of the park. My mind flashed back to the scene Rachael Carson painted in her book “Silent Spring” but here the cause is somewhat different, lack of rain and not poison “rain”. Signs of the drought effects on wildlife are appearing. A Pallid Cuckoo brought to me had dropped off its roost and died. Its breast bone was razor sharp indicating that the long journey south through harsh conditions had taken its toll.
On the positive side we have had sightings of the rare Letter-winged Kite and a Black Falcon in the Indigo Valley. Both species are rarely seen in this area. The Black-shouldered Kite is often seen in this region and is present in large numbers this season. Letter-winged Kites hunt from dusk onward. Food consists of rodents, and insects. It has been recorded eating a honeyeater and house mice.{ Source: Atlas of Australian Birds)
Note the extent of black on the underwing which assists with identification. 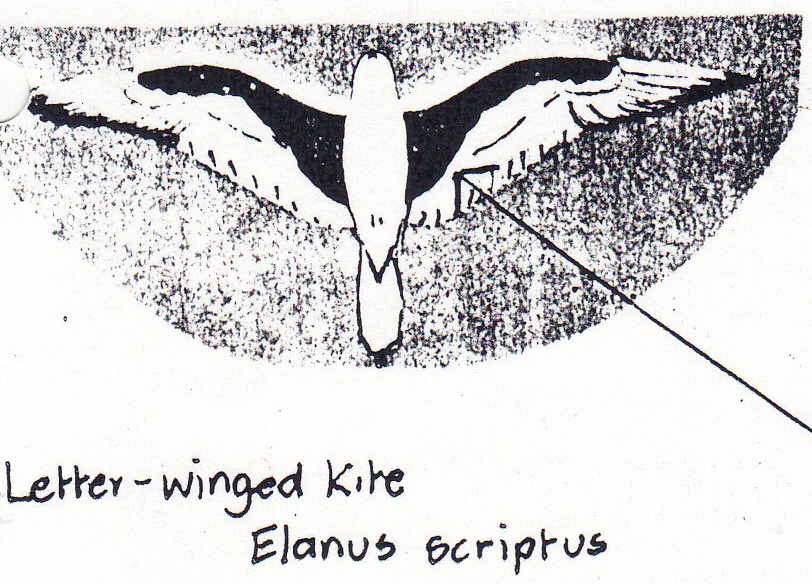 Members moved to the new landfill site at the Chiltern Tip to complete the planting of 1500 indigenous trees. Although the ground was prepared and the planting was easy the carting of the water and the hammering in of stakes took considerable effort. We had amongst us a champion with the hammer, one Darcy Johnson {aged three) and some expert tube collectors who followed the planters. A big thank you to everyone who has contributed to this project. A sign will be placed on site by the shire council acknowledging Friends. .
After lunch Natasha Schedvin, of the Regent Honeyeater recovery team, outlined the aims of the project, showed us the proposed record forms and discussed the procedures for site monitoring. Friends agreed to support the project and where possible to incorporate it into the meeting days.
Bruce Quin updated us on the Turquoise Parrot work and suggested we resume monitoring in late October. Bruce will return to Chiltern on the weekend of the 29th October to begin nestlog work.
We welcomed Glen Johnson, his wife Maria and children Darcy and Tessa.
Two hundred of the trees planted were grown by members Arlene and Steve. This was their first attempt at growing native trees and they produced excellent results with Red Stem Wattle, Varnish Wattle and Blakely’ s Gum. I’ m sure they will watch the progress of “their” trees with interest.
Bird Observers Club of Australia will be having a camp at Chiltern from October 28th -November 1st.
Camp site will be at Chiltern Valley No.2 Dam. Visitors will be welcome.
NEXT MEETING WILL BE ON SATURDAY NOVEMBER 5TH
AT CH1LTERN VALLEY NO 2 DAM. WITH LUNCHT BARTLEY’S BLOCK