Dear Friends, Welcome to 2012 and I hope it will be rewarding for you all. The rainfall for December and January, although it spoiled the display of everlastings, kept the park looking quite fresh. The last week of January was the hottest for the month and was topped off by ~40mm of gentle rain.

Sugar and Squirrel Gliders in four of the ten boxes, a Rattus species in another and honeycomb dripping with delicious golden honey in another. 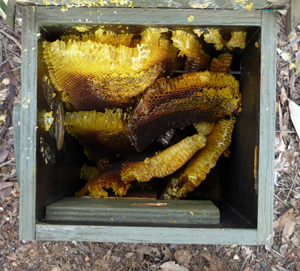 Rattus had been in his box for some time by the look of the poo load and by its sleek appearance it had obvioulsy cleaned up the honeycomb. Two other boxes had bees in them and Neville had to work hard to unstick the lid from the one containing the wonderful hive. Oddly there were only two bees in attendance and they were not concerned about interference. There was plenty of interest and every person present climbed the ladder and sampled the delicious booty.

The box is marked for removal and cleaning. It is unusual for the animals to make any noise when their box is opened but we did encounter one very vocal Squirrel Glider while other occupants were asleep. The huge webs of the Golden Orb Weavers do not seem to be so common this year which makes walking through the bush easier. Quite a few Painted Button Quail were flushed in the Grevillea Track region. The sharp eyes of Neville spotted a tiny fledgling Yellow Robin perched on a stick close to the ground and perfectly camouflaged in streaky grey plumage.

A late, but never missed, morning tea at Greenhill Dam was welcome. There were a few birds coming down to water including Little Lorikeets, White-plumed and Fuscous Honeyeaters, Peaceful Doves and a party of White-winged Choughs. A Swamp Wallaby appeared briefly on the bank but decided we were not good company. We welcomed Pat and Ewen our members from Melbourne and then trooped off to look at a few more boxes before lunch which ended about 2pm!

A friend brought an eight centimetre long beautiful green and white striped caterpillar for identification. She was unhappy that it was feasting on her very young Claret Ash. I kept it and overnight it changed from green to a lovely purple shade so sensing it was ready to pupate, soil was placed in the box and in a few hours pupation took place.

Dr Ken Walker from the museum kindly identified it as a Privet Hawk Moth and in response to my query about how long the moth would take to emerge Ken supplied this interesting information:

The colour change is called the pre-pupal stage when major chemical changes occur to prepare the caterpillar to pupate. Pupae are always funny when it comes to how long to they pupate. Most species have a built in survival mechanism which works like this.

The best life stages to extend are the non-feeding stages of the egg and pupa. If for example one of the caterpillars of this species in your area were to pupate today and emerge in 2 months and a fire had wiped out the food plant, then the adults would have nowhere to lay eggs so the population in your area would become extinct.

However, if only 80% of the pupae emerge in 2 months, and 10% emerge in 1 year and another 10% emerge in 2 years, then the population has a much better chance of surviving than all of the individuals emerging about the same time. Most likely it will emerge in a few months. How clever is nature! Thank you Ken.

The ones pictured above were snapped mating. The male held tightly to the female as they flew around. As the name suggests they are indeed potters, building very delicate mud nests in suitable spots. The potter wasps are closely related to the paper wasps and are about 2cms in size. Potter wasps are solitary, and feed on flower nectar and hunt caterpillars to seal in their mud nests. The egg is laid in the chamber and the emerging larvae feed on the live food and finally emerge as wasps. Ken has kindly offered this ID after looking at the museum collection : Paralastor pallidus but it could also be P. tasmaniensis.

Sitting quietly by a river pool Richard watched this little drama unfold. Little Pied Cormorant enjoying a pool. Enter a hungry goshawk to swoop on the cormorant. Cormorant went under the water. This was repeated quite a few times until the goshawk gave up.The pool was only 30 centimetres deep! Oh to have had a video camera on hand.

Plenty of waterbirds at the Valley Dams including Baillon’s Crake. Beeeaters are calling overhead and a few White-throated Needletails have been seen on stormy days. The woodswallow species are scarce, a few Duskies in the park but no White-browed have been reported. The Red Stringybark has begun to flower so honeyeaters should be happy. Please keep an eye out for any early Regents. There are two species of Mistletoe flowering well so it is well worth keeping an eye on that too. The graceful Black-shouldered Kites are back again. Please let me know of any interesting sightings. Good birding.

The third book on Moths of Victoria by Peter Marriot along with a disc which provides more than 300 additional pages of information, biology and distribution is now available from the Entomologist Society at a cost of $15 including postage. Excellent value! Anyone interested in natural history will find this and previous issues a great resource. An order form may be found on the following website: Entomology Society of Victoria