November’s weather has been strange. Almost tropical for a few days followed by unseasonaly cold nights. The December gathering began in early afternoon with five members checking three groups of nest boxes to do some catch-up monitoring. We were duly rewarded finding a pair Squirrel Gliders with a small young in one box and another pair of Squirrel Gliders in a second box. Seven boxes in three locations were checked leaving just a few unchecked for the year.

Down at Chiltern Valley No 2 we met up with the rest of the group to enjoy our evening meal in very pleasant conditions. Members excelled themselves with treats to share, an enormous baked cheesecake decorated with cream and strawberries, slice, cherries, dolomades and Christmas Cake were all after dinner treats. I think some of us ate too much!!

As the evening fell a chilly wind came across the water from the east signalling pack up time. Before we left we checked the recently erected next boxes and found no sign of use. There is a resident antechinus in the old tree near the bird hide and many Night Herons both mature and immature among the reeds and in the trees. Cormorants and Darters were spotted with a few ducks on the dam. We called in to Valley No 1 on the way home and found another eight or so Night Herons, darters and cormorants, White-faced and Pacific Herons and lots of ducks. By now the light was fading and time to go home after a very pleasant Christmas break-up. 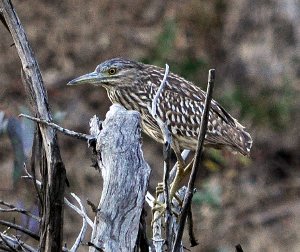 Richard and Eileen decided to spend a day checking out some distant nest boxes. We managed to pick the hottest and most humid day of the month. After checking eight boxes at one site and erecting two new ones our reward was a single glider in a box and one which glided up a tree after being disturbed sheltering in a low stump. Revived after some lunch we set out for the next batch of boxes which were in very rough terrain. With no rewards from the first seven boxes we approached the last one feeling a bit dejected and somewhat tired However rewards do come along and this one was very special. “Where is the camera?” whispered Richard, “Why, what’s in the box?” I asked. His reply stunned me, “An Owlet Nightjar on a nest!” This was our first ever record of a bird in our boxes and to be this bird was super special. Please enjoy the web pic. 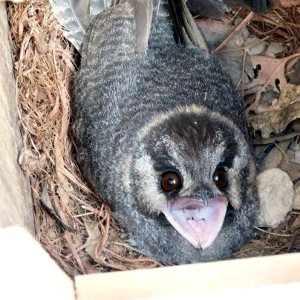 Katydids are out and about now and recently an immature specimen fell from a tree onto my shoulder and I was able to photograph it. Katydids live in foliage and look a little like crickets. There are a great many species and they come in a variety of camouflage often resembling foliage. 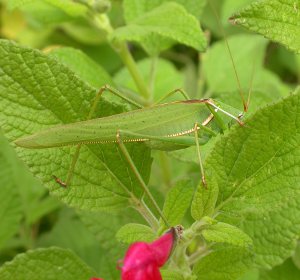 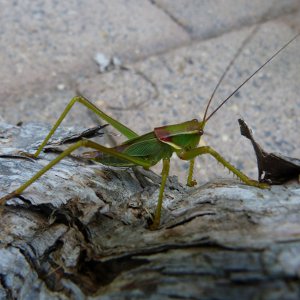 Of ants and a spider web

An interesting newspaper article cited research undertaken by scientists in Australia and Singapore. Apparently Golden Orb spiders introduce a chemical to their web silk which deters ants from entering the web. Since their prey is stored in the web it could be that the chemical prevents ants from scavenging the web contents.Full article on web.

The rain has kept the vegetation fresh. Blakeley’s Gum and Yellow Box is flowering, there are brown butterflies in their hundreds, the blues of Blue Pincushions and Bluebells along with masses of yellow everlastings are the highlight colours of the month. The dams are full so life in the park is great.

These sold out very quickly and were well received by people in the town. Thank you to everyone who purchased one. Special thanks to Emma and Matt at the post office for allowing us to advertise them and for their help in distributing them. To Neville and Helen for the preparation and presentation, thank you and well done.

Wishing everyone the compliments of the season. Have a safe and happy holiday period. Thankyou all for a great year’s effort.