Dear Friends, Despite the showery weather a keen group assembled to tackle a stand of Cootamundra Wattles on the Pipeline easement. It took just over an hour to cut, poison and stack the ferals. Before 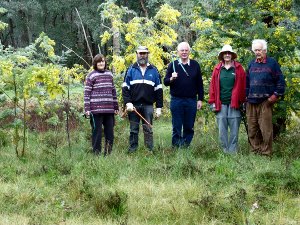 and after tackling cootamundra wattle 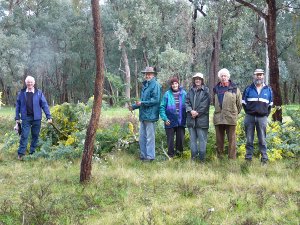 The small ones that had invaded the park were also removed. Many hands made light work indeed. The adjacent section of the park was the subject of a spring burn last year and as well as an abundance of weeds we found a lovely stand of the pea, Western Golden Tip, Goodia medicaginea. The plants are covered in flower buds and will be striking in spring, sporting sprays of yellow and brown flowers. The bun was well earned this month and despite the showers, was enjoyed at Magenta picnic area. At lunch we were treated to a pair of Spotted Pardalotes, stunning treasures of the bush. We stood in awe of their colours and seemingly trusting behaviour as they probed for food on the ground just metres from the group. Neville had a wonderful time with his camera. You can see two photos on the web of a male and female. 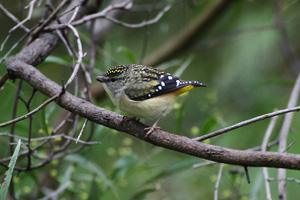 The female had brilliant yellow spots and black striations on her head, a point often missed when they are higher up. Gems indeed! Lunch and the day’s activities were terminated by heavy rain and hail. 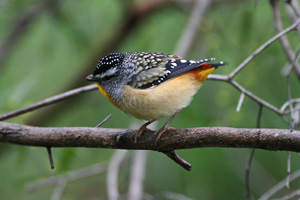 30+mm has fallen so far this month. We have had many visitors to the park seeking the Regent and Scarlet Honeyeaters, Rose Robin and the wide variety of other honeyeaters present in the park.. One visitor proudly announced that he recorded eleven species of honeyeater! It is possible to see fifteen species at present and sixteen if the elusive White-eared showed up at Bartley’s Block. Six species of robin can also be found but the seeker would need to be dedicated! On the downside, Turquoise Parrots are still very hard to find in the park. One of the most luxuriant peas this season is the Yellow Wedge-pea Gompholobium hueglii. Its succulent leaves attract the browsers and in dry years, of which we have had a few, it is chewed to the ground. This year by virtue of the rains it has grown well and the browsers cannot keep up the pruning. Of course all the peas are looking magnificent and beginning to flower. Make sure you do not miss the glorious show in the park this spring. The pamphlet box at the start of Tuan Track Walk is home to some huntsman spiders. They bred well and now surprise anyone seeking a pamphlet. One walker suggested we had provided them with a “Hilton”, dry, dark and safe. I photographed two adults one of which had a translucent body part and since I had not seen this before I asked Ken Walker from the musuem for his opinion. Apparently it had recently shed its skin and the new skin will change colour in time. 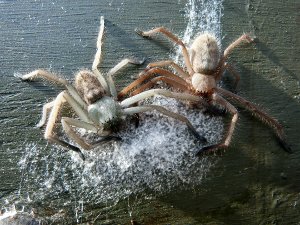 Around the park: Parks have had the bridal creeper resprayed in the block bounding Magenta Rd.,Greenhill Road and Pipeline Track along with some heavy infestations on Lang’s Track. It is already noticeably yellowing. The renovations at Honeyeater Picnic area are now complete. The Take-Break walk which leads into the park from the southbound freeway stop and winds around the dam in the Barnawartha Block is being well used and appreciated by travellers. Friends constructed the walk in the late 1980’s. Membership: Thankyou to everyone who has renewed their membership for 2012. Rainfall: July: 93.8 mm over 14 days. Yearly total to date: 607.2 mm over 59 days

If you are coming for the evening please RSVP by Monday August 29th to assist with the catering needs. Friends who are attending please bring something to share. Casseroles will be provided, so side dishes of rice, salads, potato would be good. Dessert would also be great. Drinks will be provided.

Meet at Chiltern Post Office at 10.00am BYO lunch, binocs, chair. Should you wish to come for the afternoon only we will meet at Honeyeater Picnic area for lunch between 12.30 and 1.30pm. After the day in the park we will retire to the Senior Citizens’ Rooms in Conness Street for a cuppa and chat prior to dinner. Dinner will be at 6.15pm to be followed by a brief AGM and our guest speaker Chris Tzaros. Visitors are most welcome. Chris Tzaros’ background is attached for your information. If you happen to have his book bring it along to have it signed. Please RSVP by Monday August 29th by email or on 0357 261 484 Contact in the field: Eileen 0407 486 480