The first newsletter for the year reports on the activities of the Friends group and the continuing wet summer which is promoting lots of fascinating flora and fauna Dear Friends,

Welcome to 2011 and wishing all members a happy, healthy and interesting new year.

February’s weather for the meeting day turned out to be quite the opposite to the expected heat, unrelenting rain. Our plan was to remove feral Mt Morgan Wattles from a site in the Mt Pilot section of the park so that will have to wait for another day. According to records the wettest February was in 1928 when 305mm fell. Hopefully February 2011 will not exceed that!

Spiders, butterflies, dragonflies and damsel flies have been the most conspicuous creatures for the year with frog calls taking the prize for noise. All are rather special after the long dry period and hopefully they will breed well to make up for lost time.

Chequered Swallowtail butterflies, rare in Victoria, turned up in my garden. Photos were sent to Ken Walker at the museum for a positive identification. Ken’s reply and distribution mapare on our website, courtesy of the museum. These butterflies were feeding on cultivated everlastings, salvias, eremophilas, native hibiscus and bottlebrush. 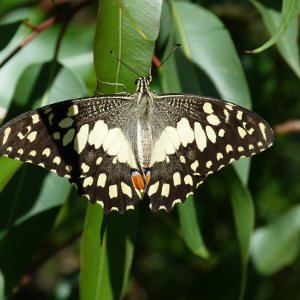 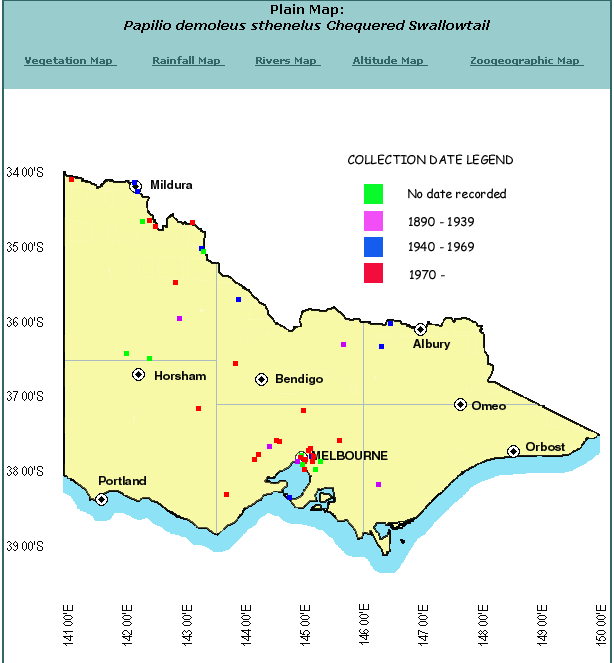 The best birds to be found are on the park margins. There is Box Mistletoe in flower with bright red Fleshy Mistletoe flowers amongst it so it is worthwhile scanning the clumps for honeyeaters.

Gary and Lisa report a Singing Honeyeater in Numurkah and Jane is pretty sure she has one in her garden in Chiltern South. After the influx of Black Honeyeaters two years ago I guess anything is possible so birdwatchers be alert. There have been no recorded reports of Regent Honeyeaters in Victoria, but they must be somewhere!

Tuan campsite enclosures are overgrown with native plants and weeds but thankfully the Capeweed has had a big spray shock. This is the time for the dreaded Fierce Thornapple to appear and a quick check revealed 10 plants which Jennifer has kindly removed. She cut off over 100 green pods. I dread to multiply that number by the enormous number of seed in each fruit. This plant is a member of the Solanaceae family and like its cousin Deadly Nightshade produces copious seed.

Bartley’s Block is amazing, the dams are overflowing, the sedges are thick, the grazers can’t keep up with the growth and there are plenty of birds. It is well worth a visit and Tuan Track walk takes walkers through the block and along the way there are stunning patches of pea species just awaiting spring!

A very noisy Channel-billed Cuckoo was perhaps the most interesting sighting for January. An unidentified raptor was spotted carrying a Lapwing chick. A pair of Lapwings with a newly hatched chick were spotted eating dead locusts on the roadside. Clamorous Reed Warblers are calling in rushes bordering a puddling dam and flocks of Corellas are flying around, perhaps seeking out the nut farms? The wet conditions have been wonderful for the frog population and Gill has recorded four species calling. Glen Johnson reports an important record of a Growling Grass Frog at Glenrowan.

looks fantastic but the birdlife is elsewhere. How unlucky can we be! A Great-crested Grebe has been there for many weeks. Coots and Australasian Grebe have had multiple clutches, hardheads, black ducks and grey teal are present. The swans hatched six cygnets and the Black-fronted Dotterels are run along the road edge in an effort to protect their eggs from prying eyes and vehicles.

The grebes nested in December and when the nest was vacated the coots took over, built it up with reeds and sticks, and reared six red-headed young. The young remained in and around the nest for four weeks by which time they had lost their red heads and were all over a smokey grey colour. It was interesting to observe the behaviour of the adult coot at this time. She (I presume) constantly dived and brought large sticks and bits of reed to the surface. She then proceeded to poke some of them into the nest and pass some to the young birds which copied the parent’s activity. Was this nest building instruction? The swamp area and it is well worth a visit.

Meet at Chiltern Post Office at 9.00am BYO lunch, binocs, chair, and other needs.We will begin at Tuan Campsite, weeding and pruning and after morning tea move to the Beechworth Rd site to tackle the Mt Morgan ferals. Tools: saw, secateurs a spray unit if you have one herbicide provided Contact 0357 261 484