The December 2010 newsletter reports on the official opening ceremony of the new bird hide at Chiltern Valley Dam No2, the December meeting and the state of the park in this wonderful wet spring and early summer.

Dear Friends
Finally  there was a dry sunny weekend! How did we pick it for the opening of the bird hide?
Blessed with a lovely day and the wetland full, a gathering of fifty-one guests and Friends many of whom had traveled long distances,  enjoyed this much awaited event. After welcoming the guests, Neville outlined the achievements of the group. Ranger-in-charge Brian Pritchard spoke of the values of friends’ groups and community participation in park activities.

This project could not have been achieved without the co-operative effort of Friends and Parks Victoria staff.
To everyone who gave generously of their time and skills to bring this commemorative project to fruition a big thank you! 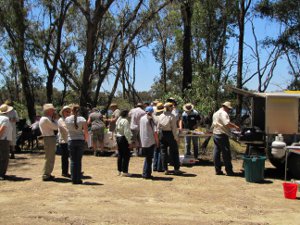 After the speeches Neville surprised Tony Marsh by inviting him to cut the ribbon and formally open the hide. Tony was a founding member of Friends and now generously gives his skills and time to be our  webmaster.

After the formalities a barbecue lunch, cooked by ranger Kris Hermans, was enjoyed in most pleasant surroundings.

Many people observed the Little Pied Cormorant breeding colony in the partly submerged trees. A pair of Darters showed off their huge wings as they dried themselves on a dead branch. A pair of Dollarbirds perched over the hide and White-winged Trillers were nesting in a sapling close by.

Along the track were numerous Diamond Firetails and several nests. Although this site is not noted for its wildflowers there were some later flowering Chocolate Lilies Arthopodium strictum sl amongst the grass.This lily can be broadly distinguished from the Nodding Chocolate Lily which is prevalent in the park, by having very little stem to the flower and the flower being darker in colour and facing more upright. This Chocolate Lily prefers the grassy areas of the plains.

The park is still providing floral treats. The continued wet and mild  weather has created perfect conditions for the Fringe Lilies, Thysanotus tuberosus

and the tiny Twining Fringe Lily, T patersonii.  Bluebells, Wahlenbergia sp are in drifts of blue and are interspersed with the gorgeous shades of Blue Pincushions, Brunonia australis.

and there are banks of Golden Everlastings providing more colour. The yellow spikes of  Wattle Mat-rush, Lomandra filiformis  are the best for years, oh the power of rain!

All the peas are sporting heavy loads of seed pods so the seed bank will be replenished and the ants kept happy. Orchids and Chocolate Lilies have set copious seed capsules.

Looking upwards, which we often forget to do unless we are birdwatchers, all the eucalypts are looking healthy as they put on new growth giving  the promise of a great flowering for 2011.

Around the park  The staff are still having a busy time clearing tracks of fallen timber and clearing drains. Tuan campsite enclosures are overgrown with native plants and weeds but thankfully the Capeweed has had a big spray shock. This is the time for the dreaded Fierce Thornapple to appear and a quick check revealed 10 plants which were removed. Throughout the park Bridal Creeper is dying off post the spraying.

One of our members, Gill Raynor lives at Eldorado on the southern edge of the park. Several years ago she and her partner Tony created an arboretum on their once bare block. Gill’s observations of birds in her arboretum include many small birds. Among her sightings are:

Here we have a great example of how birds can be attracted to a house block by sensitive plantings. Well done Tony and Gill.

Twenty-one Friends gathered at Honeyeater Picnic area to celebrate the end of a busy and trying but finally successful year. We were delighted to have the company of our new lady Regional Manager, Kate Millar and Ranger-in charge Brian Pritchard.

Friends were able to chat to Kate about the park and their involvement in Friends. Kate was impressed with the park and particularly the new hide area at Valley No 2 Dam. Our walk took us along the section of White Box Walk south from the dam and then along All Nations Road. The highlight of this stroll was a sighting of two goannas behaving in a most unusual manner, ie keeping still! One was partially up an ironbark with its tail section along the ground and the other, a bigger one, was lying at the base of a tree about 20 metres away. We watched and photographed them for over 15 minutes and they had no inclination to move. Brian suggested they may have been mating. It was also suggested they could have been fighting.

After the walk, a delicious array of food was enjoyed without the presence of flies or mosquitoes which was a real bonus.

A recent visit to Bartley’s Block for the bird challenge count found us counting other things with wings! There were clouds of  butterflies, bugs and some day-flying moths attracted to the Golden Everlastings. We identified the following:

The day flying moth was the Magpie Moth  Nyctemera amica LFP senecio species. This moth sports an  orange-striped  body signalling to would-be predators that it is unpalatable!

NEXT MEETING FEBRUARY  5TH 2011
Meet at Chiltern Post Office at 9.00am  BYO lunch, binocs, chair, and other needs.
The activity will be decided closer to the day and will be appropriate to the weather. Contact 0357 261 484