Dear Friends
The big wet continues with 130mm falling from the 12th to the 16th of October. A little dry spell would be most welcome.

The park has responded to the rains with a splendid display of wildflowers and peas. For a pleasant drive take  the Yackandandah Road and turn off at Tower Hill Road when you reach Cyanide Road cross onto All Nations Road and at the T intersection turn left and then left again into Cyanide Road and on to view Cyanide Dam. There are many other areas of the park which are full of colour so just explore and enjoy. A trip to the summit of Mt Pilot is always rewarding.
The October Friends' task involved weeding and mulching one of the enclosures at the Tuan Campground.  The once barren area of ground now has three fenced-off enclosures that reduce the grazing pressure considerably.

In fact the fencing is so successful and the season so bountiful that the weeds have started to take over the enclosures and the interesting array of plants that now flourish within.  June launched forth with her whipper snipper and trimmed the grass.  Others followed with newspaper that was soon covered with mulch. One of the enclosures has been receiving fairly consistent attention that has helped to keep the weeds under control.  In the other two enclosures, the weeds have tended to get away somewhat but now one of them has been partly tidied.  Everyone agreed that we should visit the enclosures more frequently during the year and keep a tighter rein on the weeds.  Parks Victoria has sprayed the Capeweed in between the enclosures so that these vigorous plants can be controlled.  While we worked we were serenaded by a male Mistletoebird that called frequently from the trees nearby.  There must have been a nest in the vicinity as these birds usually only provide a fleeting glimpse of themselves.  Other birds were fairly scarce in general but Fuscous Honeyeaters, Willy Wagtails and Red Wattlebirds were recorded. 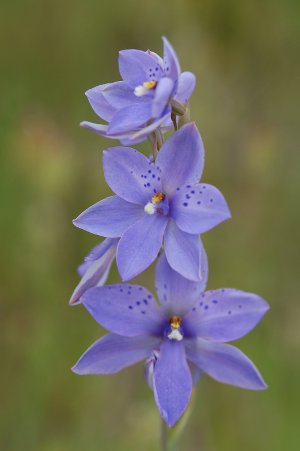 The Regent Honeyeaters in the Park have dispersed somewhat recently and finding them is much harder.  We all need to keep an eye out for Regents anywhere in the whole district and if any are found please call Dean Ingwersen on 0409 348553. Thank you Neville for this report

Modification of the northern block boxes, with the exception of  two which are occupied, is now complete.
Mid-month the seven Feathertailed Glider boxes were installed and most of the southern block boxes were modified. We will have more new boxes to erect in the next few weeks. Some of these will replace very old boxes and where there  has been a single box an extra one will be added. Checking of these old boxes revealed recent use.

This has been an exceptional year for the Yam Daisies, they are even growing happily in the gutters. The rain has rather spoiled the show of Chocolate Lilies and small orchids but the showy Yellow Wedge-pea, Karalla is spectacular. This season there has been so much for the browsers to eat that they have left the juicy Karallas alone. The next wave of peas to show will be Narrow-leaf Bitter-pea, Daviesia leptophylla and Heathy Bush-pea, Pultenaea procumbens 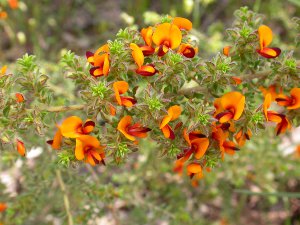 so there will be colour for some time yet. Beard Orchids, Sun Orchids and the Leopard Orchid Diuris sulphurea will also be in flower.<p>
Many Scarlet Honeyeaters were in the park in late September and early October and it has been suggested that they were on their northerly migration, which would explain why they have not been seen recently. There was an  influx of Painted Honeyeaters in late September but they too have dispersed. Friarbirds and Wattlebirds continue to be dominant in the park especially where there are hybrid eucalypts in flower.<p>

The nest boxes were checked mid month and box three was re-erected. Only one box remains to be modified and it was occupied at the time of inspection. We found a huge breeding  fox den which was surrounded by sheep remains, fur and black feathers. We hoped/thought the fur was rabbit. The dam was full and the Micromyrtus patch was a sea of gold and had obviously enjoyed the wet conditions. Best bird seen was a Leaden Flycatcher which was interacting noisily with a Restless Flycatcher. There were plenty of young Choughs and countless kangaroos many of them quite small. The Black-tipped Greenhoods were in flower among drifts of  golden Goodenias.

The remaining shrubs were planted  just before the rain! Thanks to June and Peter for their help. Peter has framed the waterbird poster and will put it and the commemorative plaque in place at the next meeting.

September 66.1 mm over 8 days. Yearly total to date: 588.0 mm over 71 days.
Opening of the bird hide: Due to the extremely wet weather this event was postponed until November 20th.
All arrangements will remain the same.

guided walk through Dockers Plains Pastoral Company Landscape Covenant Saturday October 23rd from 1.00-3.30pm Full details on the website. An opportunity not to be missed.

NOVEMBER MEETING  SATURDAY 6TH
Meet at the Chiltern Post Office at 9.00am. BYO lunch, sunscreen,binocs and energy.
Activity will involve final preparations for the hide opening on November 20th.The remaining mulch needs to be spread around the newly planted trees so a shovel and rake would be handy. Some weeding may also be required. If we have nest boxes we will erect two lower in the reserve.