The December 2009 Newsletter reports on the final meeting for the year at Valley No 2 Dam and highlights current places, flora and fauna of interest in the park Dear Friends

Chiltern Valley No 2 Dam proved to be an interesting and noisy choice of venue for the December Christmas Tea. 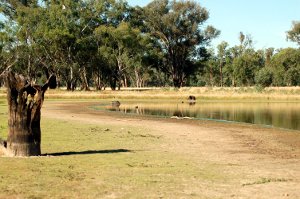 The water level had receded and left the shore dry enough to walk around. Firstly we had to negotiate the thick grassy border to reach the flats but once there it was a pleasant stroll. Native Hens retreated to the far edge of the dam and Black-winged Stilts and the little Red-kneed and Black-fronted Dotterels just kept out of our way. A lone Pelican perched on a dead stump, obviously replete as it did not move while we were there. A good sighting was provided by a single Glossy Ibis. Pink-eared Ducks, Hardheads and the striking Mountain Ducks were among species noted. Notably absent were the raptors.

A small forest of Red Gums is becoming established on the northern edge of the dam and on a small section of the western edge. The growth on the northern edge will enhance the habitat on that shoreline. The bright yellow flowers of the Clove Strip also known as Water Primrose, Ludwigia peploides ssp montevidensis, provided some colour. This plant is a prostrate native perennial with dark green leaves. It both creeps and floats. Its seeds are eaten by birds. It can be invasive but this is not the case in our dams.

The walk down to the dam was via a mown track which lead to the interpretive plaque. Our thanks to parks staff for this.

The good spring rain along with the welcome top-up in November ensured the growth of our plantings. We were particularly pleased with the growth on the White Cypress Pines as some are nearly a metre tall. The Bursaria and Golden Wattles have also been very successful. The icing on the cake would be some summer rain! Blue Devil Eryngium ovinumshould be visible on the White Box Walk. 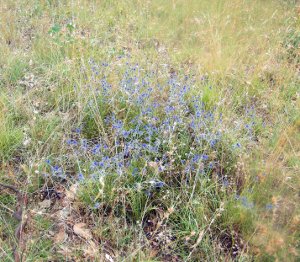 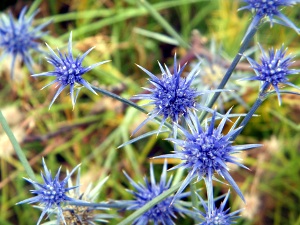 After our stroll we settled down in the shadow of the mullock heaps where the table was set with goodies for tea.

Eating and bird watching can be quite a challenge and the antics of the woodswallows caused a few disruptions.

But trouble was in the wind! A Hobby came swooping in over the noisy mob. It was pursued by one brave bird and momentarily distracted. However it returned with a vengeance swooping and calling only to be chased away again. On its return sortie it was seen clutching prey which it took to the top of a dead tree atop the mullock heap and began to pluck before flying off with the meal. One keen spotter saw the head come off. There were no volunteers to climb the mullock heap to identify the victim’s head! Peace returned and our meal was resumed.

After tea some of us walked along Nankeen Track to the far end of the dam. As the sun set Antechinus were scuttling about and the dry grasses were moving with insects. It had become too dark to spot them and believe it or not none of us thought of bringing a torch! All were left in the cars perhaps a combination of leaving in the daylight and too much food? A big bonus for the evening was the absence of mosquitoes and very few flies.

Things have quietened down a lot. Bartley’s Block remains rewarding. Black-eared Cuckoos were seen there on December 5th and it is the most reliable spot for Turquoise Parrots which now have fledged young. Koala Track is good for White-throated Gerygone and Leaden Flycatchers. Tall Lobelia, Lobelia gibbosa, is showing off its gorgeous deep blue flowers. It will be the last of the wildflowers for the season.

Unfortunately the late November rain did not produce enough run-off to help Cyanide Dam. All the other dams have water in them.

If you happen to be a member of the RACV and receive their magazine have a look at page 72 in the Go Guide Walk. The park has been featured for this quarter with some emphasis on the White Box Walking Track. When the writer, Melanie Ball, visited earlier this year she was very taken with what the park had to offer and decided to feature it. It would have been good to have had this publicity in the spring issue. Friends of Chiltern website is listed at the end.

Wishing you all a Happy and Peaceful Festive Season and than kyou for supporting Friends.

2010 CALENDARS There are only six calendars left so be quick if you would like one. To order a calendar please fill in the attached form and forward it with payment to P.O.Box 60 Chiltern 3683. Calendar in padded bag,including postage, anywhere in Australia $.27.50.........Calendar to be collected $20

Please find enclosed cheque/money payable to Friends of Chiltern for

Enquiries to: This email address is being protected from spambots. You need JavaScript enabled to view it. or phone 03 57 261 484