The September newsletter reports on the Annual General Meeting and guest speaker Gary Backhouse's presentation on Orchids of the World, the Annual report as well as updating on conditions in the Park Dear Friends

Dark clouds which threatened to spoil our afternoon walk obligingly moved over us without a drop of rain falling.Twenty-two Friends and visitors assembled at Honeyeater Picnic area in welcome sunshine. Accompanied by orchid specialist Gary Backhouse, we took a casual stroll through the park enjoying the orchids, wildflowers and various peas. The greenhoods were prolific this winter, especially the Nodding and Dwarf ones. Less numerous were Blunt Greenhoods, Pterostylis curta and Maroonhoods, Pterostylis pedunculata. A group of delicate Golden Moths, Diuris chryseopsis, was found on the rocky ground along Muffler Track. These delighted Gary and were the target of his camera. 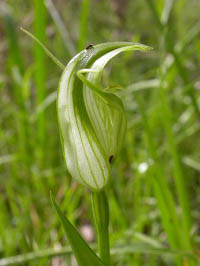 Purple Wax-lip Orchids were beginning to flower and Early Nancies in various shades from white to deep purple were abundant. Along Cyanide Road Austral Indigo and Handsome Flat-pea were in perfect flower although the bushes of the latter were rather stunted. The spring rains brought out the best in the Sundews, Drosera species, as they glistened in the sunshine, some green and some reddish. Their sticky tentacles trapped many insects on such a warm afternoon.

Everywhere the Grevillea alpina was in good flower with its colours ranging through reds, orange and apricot.Heart-shaped orchid leaves were abundant but without flowers. Many Pink Fingers, Caladenia carnea the occasional tiny Blue Caladenias, C caerulea and yellow and brown Leopard Orchids, Diuris pardina completed the day’s delights.

Back at Honeyeater Picnic area afternoon tea was welcome, and yes, we did have the customary bun which we managed to share with everyone.

Aside from the wildflowers sharp eyes spotted a Sugar Glider out in the afternoon sun, however it soon found a hollow once spotted. No reptiles were seen. Birds included Little Cuckoo-shrike, Rufous Whistlers (in good voice), Dusky Woodswallows and the ever present Brown Treecreepers.

The AGM was held prior to the dinner. Neville presented the annual report and Peter tabled the financial statement. Gary Deayton took the chair for the election of office bearers. Your committee for 2009-10 is:

The Annual Report is on the website for those who missed the AGM.

The Chiltern branch of the Red Cross catered for the evening and provided a splendid three course meal which was thoroughly enjoyed after an afternoon of walking. Our guest, Gary Backhouse took us for a wonderful trip “Around the World in 80 Orchids”. Dazzling colours and intriguing forms from the desert, the grasslands and the tropics had the audience enthralled. The trip began in Chiltern with our specialities and ended in the tropical regions of South America.

Perhaps the most amazing, though not the most colourful species, was the Western Underground Orchid, Rhizanthella gardneri. This leafless plant has no chlorophyll and lives completely underground. It grows in association with mallee forms of Broombush. Gary’s knowledge, enthusiasm for and commitment to orchid conservation shone through during this excellent presentation which concluded a very special day for Friends and guests.

The next two months will be very rewarding in the park. The summer migrants are returning and orchids abound. The Chocolate Lilies are beginning to flower and some rain would prolong and enhance their flowering. The park dams, apart from Cyanide Dam, all have some water in them but whether it will last over summer without good rain is doubtful. The Valley dams are roughly half full with Valley No 2 providing the best birding.

Migratory birds seen this month so far: Rufous Whistler, lots of White-winged Trillers, Western Gerygone, Cuckoos, Sacred Kingfisher and Dusky and Masked Woodswallows. Very vocal Rufous Songlarks are everywhere and there is plenty of grass for their nesting sites. Male Turquoise Parrots have been spotted in various locations and it is to be hoped the females are all on nests. The Painted Honeyeaters have not turned up yet and an inspection of the mistletoe clumps revealed very little fruit set despite the good summer flowering. Rainbow Bee-eaters were heard over Lappin’s Dam on the 17th of this month.

An interesting sighting was that of a huge goanna,Varanus varia, basking in the morning sun on a huge limb of a dead tree. A smaller (~70cm) darker and finely banded one was draped over its tail. The old one was at least 1.5m long and beautifully patterned with wide cream and dark bands along its body.

Another interesting sighting was of a pair of amorous Echidnas, blissfully unaware of my presence.

Saturday October 24 at 11am. Lunch provided. See this flyer on the website for further details and map. This is a DSE event.

NEXT MEETING: SUNDAY OCTOBER 4TH MEET AT CHILTERN POST OFFICE AT 9.00AM

The Tuan Campsite enclosures require some serious weeding so if you are able to spend some time at this meeting it would be appreciated. BYO lunch, gloves, weeding tools, hat, sunscreen and energy. Contact: Eileen 03 57 261 484