The May 2009 newsletter reports on recently held activities by Friends both in the national park and the Rutherglen Conservation area. 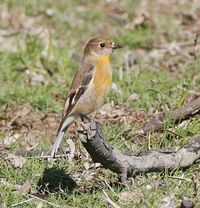 We made the most of another glorious autumn day, checking and modifying boxes, listing birds and enjoying the discovery of orchids in the dry, rocky soil. Along with all this was a leisurely morning tea, followed later by lunch and chat at Bartley’s Block. Of the four boxes at the Cemetery Bushland Reserve, one remains to be modified, this one was occupied by a Squirrel Glider. At Bartley’s Block we replaced a 20 year old box which had been used by a Tuan but had now disintegrated. Among the contents were some pieces of snakeskin. Of the other three, we modified two and found two gliders snuggled up in the third. Interestingly, the one box from which bees had been removed was completely empty. If it remains so we will remove it and replace it with a new box as it is thought the odour from bees is disliked.

The work at this dry rocky site, with emerging Rock Fern, was pleasantly interrupted by the surprise discovery of orchids. The dainty pink Parsons Bands, Eriochilus cucullatus and later some Sharp Midge-orchids, Corunastylis despectans, caused tools to be exchanged for cameras! The Parsons Bands were perfect but the Midge Orchids were past their best.

A rather late lunch followed and was interrupted by the presence of a vocal male Golden Whistler. While we had compiled a good bird list no species were abundant. Notable absentees were Brown-headed and Black-chinned Honeyeaters. It is rare to spend so much time in the park and not even hear their calls.

The last two boxes were on Stringybark Track. One of these boxes had no chewings at the entrance so we assumed it would be unused. How wrong we were. It contained quite a large nest of green leaves, feathers and bark and had a buried occupant which we suspected may be a Tuan as there were scats in the nest. As these two boxes are close together we assumed, wrongly, that only one would be in use. It was decided that another box would be erected at a later date. The other box had at least three Sugar Gliders curled up together in a leafy nest.

We visited the reserve on Wednesday May 6th to check and modify boxes. Like everywhere else it was extremely dry. All 14 boxes were checked, three more were modified which leaves five more to be done when vacant. Two Sugar Gliders and two Squirrel Gliders were found while two boxes contained good sized wool, feather and bark nests with scats in one corner. The wool nests were not disturbed but we may assume the Tuans are active again. One box had a surprisingly beautiful nest. It was a perfect bowl shape on the outside, the second layer was fine material and some wool with a light layer of fine bark strips as a covering. We could see the little glider curled up in the centre. One has to marvel at the construction skills and patience of these little animals in creating their home. The last box checked, number 11, had columns of small black ants marching up into the box. The entrance was well chewed and we half expected to find a dead animal in it. Instead we found just a few green leaves and hundreds of ants. Some little Bluebells were flowering and the grassland section produced lots of Flame Robins and a few Jacky Winters. As we left a pair of Hobbies circled overhead, calling and stooping before disappearing into the distance.

June and Peter have enhanced 4.95 hectares of their property to conserve a Valley Grassy Forest ecosystem and placed a covenant on it. The restoration has taken eight years and is a credit to their persistence through drought and heat. Native grasses abound and as the vegetation has matured the bird list for the property has increased. Congratulations to our members June and Peter on their wonderful achievement. A Trust For Nature project. 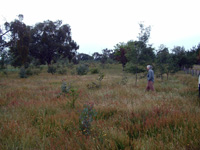 As you are aware a grant for a project goes along with this award. The chosen project is a bird hide at Chiltern Valley No 2 Dam. Thank you to those who responded with suggestions for a project. A bird hide was a popular choice. Thanks to Jan Palmer who offered her skills to source and cost suitable materials for the project. Later in the year we will be seeking input from Friends with skills to assist with the installation of the hide.

Our group has been nominated for an award. A number of members will be attending the award ceremony on May 16th. Parks Victoria presents Kookaburra Awards to acknowledge outstanding service to a park.

Possibilities include: installation of the Tuan Track signage, nest box modification and checking or if rain has fallen and the ground is ripped we may plant more trees at Chiltern Valley No2 Dam.

BYO chair, lunch, binocs, water, energy, a bucket, and shovel or ramming tool. The holes will have been drilled and ground ripped provided Parks are not occupied with fires and machinery is available. Contact: Eileen 0357261484