Following a week of “Indian Summer” the sharp April morning was a welcome change. Armed with ladder, shovel, rakes and wheelbarrow we set off to monitor nest boxes and work at Tuan Campsite.
Our regular nest box modifiers were all otherwise occupied this month so we confined our work to monitoring.

The Cemetery Bushland Reserve boxes provided us with a Squirrel Glider and a box full of Sugar Gliders and two boxes with leaf nests and no occupants. The Depot Road box remained unused which is a puzzle as the old box was in regular use. An interesting moth fell on the ladder as we took it down. It was small, with tented white wings bearing a distinct black stripe and an orange and black banded abdomen. 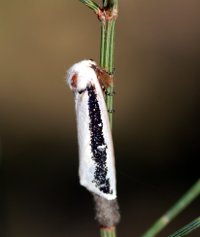 After searching the moth books I sent a photo off to the authors of Australian Moths for ID. Ted Edwards, the moth specialist identified it as a female Oenosandra boisduvali, it seems not to have a common name. The female of this species does not feed, she is just an egg machine! These moths are night flying. The larval food is eucalypt sp. They have a curious way of “playing dead” when in danger. They lie on their side and curve their abdomen forward displaying the orange and black bands looking as if they are dead. The CSIRO website has a list of moth illustrations: ento.csiro.au/anic/moths.html The photo taken in May last year shows the female laying eggs on Drooping She-oak. Thanks to Paul Zborowski and Ted Edwards for their expertise.

After morning tea we dug around the trees outside the enclosures and mulched them. The Red Box have grown very well but the Ironbarks have either died or are struggling. It was decided to replant the spaces with Red Box.

The growth of the plants in the enclosures has been remarkable given the weather. Many peas have appeared throughout the three enclosures they include Twiggy Bush-pea, Pultenaea largiflorens, Small-leaf Parrot-pea, Dillwynia phylicoides, Showy Parrot-pea D. sericea and Heathy Bush-pea Pultenaea procumbens. Diggers’ Speedwell, Nodding Saltbush and Saloop both resplendent with tiny red berries plus numerous Golden Wattle seedlings have all come with the forest mulch. The latter do not do well after a year or so and we think the ground is probably unsuitable for them, perhaps too nutrient rich. In contrast the Varnish Wattles do really well and many young plants have appeared.The growth of the Bulokes has pleasantly surprised us as they are noted for being rather difficult to establish. Birds are using the plantations and a Golden Whistler, Willie Wagtail and Restless Flycatcher calling while we worked

A group of 25 birdwatchers from Nhill will be visiting for four days at the end of April.
An orienteering group used the car park at the campsite on April 5th. They enjoyed the invigorating autumn morning. We were dismayed to see that two cars parked off road on a fragile area crushing the Saloop plants which bind up the soil.

Valley No 2 Dam is dry. Valley No 1 is holding up and the little islands and post and rail fences have emerged. The reeds have all dried off and the margins are covered with mats of Sneezeweed. On April 7th I called in to look at the water level and was greeted by the spectacle of a White-breasted Sea-eagle swooping low over the water and putting the Yellow-billed Spoonbills and White-faced Herons to flight. They all landed momentarily in the trees. The Eagle took off again and was immediately harassed by a pair of Little Eagles which were soon joined by another pair. There were two birdwatchers from England at the dam and they were thrilled by the performance. Of course the Sea Eagle was a big tick along with the Red-kneed Dotterels!

Some recent rain was enough to form a muddy puddle at Depot Dam and judging by the footprints in the mud the kangaroos and birds have found it. Golden Whistlers, Currawongs, Grey Fantails, Scarlet Robins and the odd Eastern Spinebill are among the migrants. 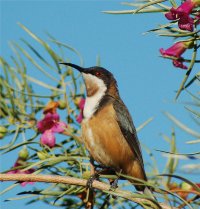 There is nothing flowering in the park so honeyeaters are scarce. The occasional Dusky Woodswallow can be found. Grey Butcherbirds seem to be more abundant. One was calling along Depot Road on April 3rd and they have also moved into the town, advertising their presence with their lovely calls.

Rainfall for March 37.1 mm over 5 days. Yearly total: 65.0 mm over11 days. One would hardly know rain had fallen recently. The last fall on April 6th brought only 7.5mm so the park missed out. 25 mm fell just north of the park!

NEXT MEETING SATURDAY MAY 2ND 2009 MEET AT CHILTERN P.O AT 9.00AM
Installation of the Tuan Track signage. Nest box modification and checking.
BYO chair, lunch, binocs, water, energy, a bucket, and shovel or ramming tool. The holes will have been drilled provided Parks are not occupied with fires and machinery is available. If not there is some light work to be done at the Tuan Campsite
Contact: Eileen 03 57 261 484