Friends offer their condolences to those people in the fire affected areas.

Many of us have been touched by the loss of friends. The loss of Jenny Barnett and her partner has robbed us and the VNPA of a committed researcher. Over many years Jenny researched the box-ironbark country of Victoria. Through her meticulous research and campaigning and with her assistance we were able to secure Chiltern as a National Park. She will be sorely missed. The Victorian National Parks Association isorganising a memorial to her and Friends have donated $200 for this purpose.The VNPA website has full details

The March Friends outing was treated to a glorious autumn day. The Park is extremely dry and we are all awaiting the break of season with great anticipation. Our task this month was to locate mammal nest boxes and to install inspection flaps on the side so that the tree-top camera can be used to inspect them in future without someone climbing a ladder. It took a while to find the first box as we gradually gained experience with the GPS and because we inadvertently started looking for next box #11 instead of #13 but it is always lovely to explore the Park anyway

Phillip compiled a bird list that steadily increased although we never encountered many species in any one spot. The birds must generally be somewhere else because there were many times where we noticed how silent it was. &nbsp;All of boxes that we checked showed signs of occupancy with many green gum leaves even if there were no animals presentThe leaves are usually packed carefully on edge making a multi-layered nest with a cup-shaped hollow in the middle.

The second box contained a glider and many people climbed up to have a look. This box was not disturbed any further as we will modify it another time when it is not being used.

A second set of boxes was located along Bull Ant Track near some very old boxes that were inspected as well. &nbsp;One large box (that once contained ammunition for the army) now contains a Brush-tailed Possum that looked to be enormous after seeing the glider earlier.

Two boxes that were unoccupied contained green gum leaves but also had feathers, strips of bark, small amounts of fur and scats. These are signs of recent Tuan occupancy which are very pleasing to observe. Lunch was enjoyed at the Tuan campsite on Depot Road and afterwards one group set off along the new Tuan Track and others went searching for nest box 12. This box was eventually located and modified. An old box nearby was inspected and found to contain a nest entirely made of fur and this is believed to be a sign of occupancy by Tree-creepers. (This report was written by Neville Bartlett)

Throughout January and February the young from last year leave their birthplace to look for a new home. At this time they are vulnerable to predators such as cats and owls. Hopefully they will find one of our nest boxes. By April and May the adults gather fresh green leaves and carry them in their tail to their new nest. They are quite clever in placing the leaves on their edge in the nest and we have often commented on the arrangement of leaves as we inspected boxes. This arrangement could well be a glider's form of insulation or the framework for the cup-shaped nest. Whatever it is the skill is to be admired.

Valley No 2 Dam has a small muddy puddle in the centre. Valley No 1 is shrinking fast and the little island has emerged. A Pelican and five Yellow-billed Spoonbills were busy sifting the waters, Grey Teal, Wood Duck and, a lone White-faced Heron and dotterels patrolled the margins. Greenhill and Lappin's Dams are low. At Greenhill Dam, once the premium spot for birdwatching, birds are scarce.The park understorey continues to become depleted. Whereas once one could be hidden 50 metres off a track, now that is impossible. The most resilient shrubs are the lovely Gold Dust Wattle and Daphne Heath. Golden Wattle has been greatly depleted. The enclosures are holding up well and many of the everlastings have shed their seed.The beautiful Orb Web Spiders are one of autumn's gems, unless, that is, you happen to walk through one of their incredibly strong webs. This year they are undoubtedly having a lean time as insects are scarce. Their skeleton larders have quite a number of the small, copper coloured beetle bodies hanging in a vertical chain. 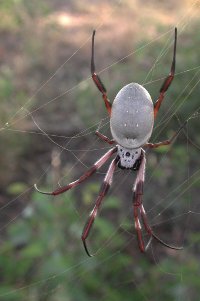 Phillip recorded twenty-five species for the day. Perhaps the best were Spotted Pardalote, Red-capped Robin, Weebill, White-throated Treecreeper, Crested Shrike-tit, Dusky Woodswallows with streaky juveniles amongst them, Kestrel and Little Cuckoo-shrike. Needless, and sadly, to say none were plentiful.

February: 5.4 mm over 3 days. Yearly total: 33.3mm over 6 days. A good Autumn break is badly needed!It would appear that it is beginning as it is raining steadily as I ... March 12th

Sunday April 5TH 2009 Meet at Chiltern P.O AT Installation of the Tuan Track signage. Nest box modification and checking. Hopefully the weather will be reasonable. BYO chair, lunch, binocs, water, energy and a shovel or ramming tool. The holes will have been drilled provided Parks are not occupied with fires and machinery is available. A change of activity may be necessary.Contact: Eileen 0357261484