The August newsletter reports on the August meeting, the plants that are currently in flower, the ongoing success of the regent honeyeater release and some up to date information on birds including a pair of brolgas! 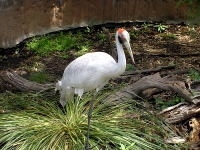 Our activity for the August meeting on a quite brisk morning soon had us warmed up. Re-mulching and weeding a section of  enclosure three took about an hour and a half. Due to the heavy growth of weed we found it easier to re-mulch. Growth on the planted shrubs has been excellent but it is the emerging seedlings which are really 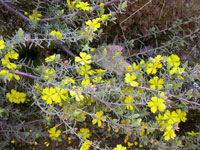 are in flower and two lovely seedling Grevillea alpinas are sporting flowers, one is a lovely apricot shade and the other looks like being a red variety. The smaller shrubs, lilies and everlastings are far more successful when they come up from seed. Golden Wattle in enclosure three grew well only to die over the last month or so but other wattles like Varnish and Lightwood seem quite happy.

The traditional morning tea was enjoyed before we moved off to modify some nest boxes. After lunch we took a trip over Bartley’s Block to enjoy the magnificent display of Golden Wattle and to check some nest boxes.
<a href="/index.php/component/expose/?Itemid=26&album=15&photo=46playslideshow=yes">

No animals were present although three boxes contained fresh leaf nests and another had fresh Tuan scats in it. All promising. The Tuan Track boxes had leaf nests in them for the first time showing that gliders had found them.baranduda

Ongoing monitoring is being undertaken every second day. Anyone who would like to assist can call Sarah on : 0427 619962
We are still finding 19 birds over the period of a week  which is very pleasing. On two occasions while monitoring we were treated to large flocks of  Dusky Woodswallows feeding in the blossom and then perching in a row on a large branch. Ian counted 30 birds perched side by side. As usual no one had a camera! Bruce Quin spotted a Swift Parrot whizzing overhead and Purple-crowned Lorikeets have been heard on several occasions. Pardalotes have been scarce but on August 4th two flocks of 40+ were seen  and heard picking off scale and then seen to fly like a cloud. Antechinus are now quite active. A pair was spotted on the limb of an  ironbark with the male (presumably) hanging on to the female. They ran along the branch and down the trunk in the same manner, scampered across the grass and disappeared into a hole in a very substantial log. They emerged briefly, seemingly looking at us before disappearing. Monitoring Regents is rewarding in many ways so why not come along and enjoy!baranduda 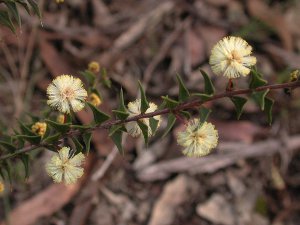 with its pale yellow flowers is often missed as it grows only to ~60cms. Bartley’s Block is a sea of gold  with the Golden Wattle in good flower. Sadly it is being regularly ripped up by a trail biker and a car. The Patterson’s Curse is vigorous having enjoyed the rains and sunny days. Even the minus 3 degree frosts do not seem to stunt its growth
Swift Parrots were sighted at the end of White Box Walk close to Honeyeater Picnic spot. A pleasing record was of Painted Button-quail also spotted on White Box Walk. Rose Robins are around the Greenhill Dam area and along the road in the Red Box area.  Six Black Kites were spotted over Klotz Track and to cap it all off there was a pair of Brolgas observed in the

The fill in trees have been planted and were rained on the next day. Seems we only have to plant trees to encourage rain. The soil in the original rip lines was perfect for planting. Hares were numerous in the grassy section and have damaged a few of last year’s trees. The reserve was brightened by flowering Golden Wattles, about 25 were counted, more than originally thought. They are much more evident when in flower. The rosettes of Pterostylis bicolor, the Black-tip Greenhoood, have tiny flower buds and there is an abundance of lily leaves. The dam is only damp indicating that not as much rain has fallen on the plains as in Chiltern. Birds were few but a highlight was a Hobby perched in a dead tree and calling incessantly. Others recorded were Red-capped Robin, Grey Butcher-bird, Weebill, Yellow Thornbill, Grey Fantail, Eastern Rosella, Raven, Galah and Magpie. The Olives are still very prominent in the understorey and a good-sized mob of Kangaroos was disturbed in the northern section. A mid-month visit to modify and check nest boxes is planned for a Monday, with a date to be fixed. If you are interested please contact me.

NEXT MEETING:  AGM   SATURDAY SEPTEMBER 6th MEET AT  Chiltern Post Ofice at 2pm.
Please RSVP by Monday September 1st if you are coming for the dinner.
After visiting the park we will gather at the Senior Citizens’ Room at 5.30pm. Dinner at 6pm. Speaker at 7.30pm.
Guest speaker Matt Cameron, a threatened species researcher, has conducted research on Glossy Black Cockatoos undertaken for a PHD. Come along and hear about the challenges threatened species face.