The March Friends' gathering took place in glorious Autumn weather and mammal box checking proceeded with great enthusiasm.  First stop was on Stringybark Track where two boxes were inspected.  Both were unoccupied but each contained glider nests.  One featured a carefully placed collection of green partly-dried leaves packed neatly.  It must have taken many journeys to assemble.  The other box contained a tuan nest and it was almost entirely made up of large feathers and bark.  The next stop was an area next to Chandlers Boundary Track and not far from the Indigo Goldfields Cemetery.  Here eight boxes were checked and all but two contained collections of green leaves arranged with varying degrees of care.  It was fascinating to see the differences in decor.

Morning tea featured the usual bun and a bird count was assembled.

There were many birds about and the list steadily expanded.  It was great to watch Rainbow Birds gathering insects and then landing to go through the usual ritual before eating them.

Thank you Neville for this report

The morning and afternoon trekking produced a bird list of 40 species. Thank you Phillip for compiling the list.

Tis the season for Orb Web Spiders and post the rains they are doing very well.

One has to be vigilant to avoid becoming entangled in the tough golden webs. Insects of all sizes are snared including bees and large beetles

Parks have constructed a number of new boxes which have been modified to make it easier to use the camera. During the year Friends will systematically check and modify the existing boxes.

The big fall of 85 mm topped up Depot, Greenhill and Mt Pleasant Dams. The southern block received about 35mm just enough to form two puddles in Cyanide Dam, one of which disappeared overnight and the other in a couple of days! Yes, the cracks were very big and very thirsty.

Valley No 2 Dam which was perilously low is now at 75% thanks to big fall and Valley 1 was also topped up.

In mid-February a small party of Bee-eaters was seen on Red Box Track along with Brown-headed and Black-chinned Honeyeaters, White-bellied Cuckoo-shrikes and Varied Sitellas and a few other species. I suppose the Bee-eaters, which have been very scarce here in recent years, were gathering for their trip north.
<p>
<b>Rutherglen Conservation Reserve</b> Mid-month five members visited the block to check nest boxes, re-erect one which had been cleaned of bees, do a bird and flora survey and generally have a nice day out.
<p>
It turned out to be a very exciting day out where the nest boxes were concerned. Of the ten boxes, nine were in use. Our tally of animals was: Squrrel Gliders 2  Sugar Gliders 8  Brush-tailed Phascogale (Tuan) 1 and a Tuan nursery nest in a separate box. Each of us was absolutely delighted to see the Tuan. 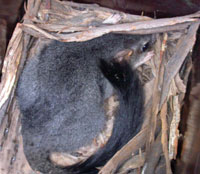 Although we knew from scat ID that there was one using the boxes confirmation in the flesh is always desirable. The nursery nest was made from sheep wool, a few feathers and a little bark. There was a pile of scats in one corner and a little tunnel entrance at the base. In contrast the Tuan in an adjacent box had constructed a lovely neat little bark nest to surround itself..
<p>
The bird list was extended, the most interesting species being a Red-capped Robin. Four new plant species were added to the flora list including an attractive little weed with a purple and yellow flower and greyish hairy leaves. This lone plant was later determined to be Kickxia elatine, Toad-flax.
<p>
As we prepared to sit down for morning tea ( no bun on these days!) a lightning fast Brown Snake shot down the base of  tree stump next to us. Excitement of  a different kind.
<p>
In view of the high occupancy rate of the ten boxes we have decided to erect extra boxes in the coming month.
<p>
Congratulations to Sean and Eleanor  Dooley on the safe arrival of a precious baby daughter, Edie.
<p>
<b>Little Red Flying Foxes</b><p> There has been an influx of these little animals in the Rutherglen area with quite a few coming to grief on barbed wire fences. Last report of  this species in the park was on a spotlight walk along Battery Hill Road about 10 years ago.
<p>
<b>Rainfall for February</b>: 108mm over 5 days. Yearly total:  173.6 over 9 days. A very good start to 2008.
<hr>
<b>NEXT MEETING:SUNDAY APRIL 6 TH.  9.00am CHILTERN POST OFFICE.</b>

Contact: Neville  0260 208 632 or Eileen  03 57 261 484  Nest box checking and modifying so there will be lots to do. BYO lunch,chair, binocs, sunscreen and water. Afternoon walk.
<hr>
<b>EARTH HOUR MARCH 29TH</b> You may like to join with Sydney Opera House,  Federation Square and other prominent buildings world wide and “switch off for an hour” on this day. Little things can make a difference.