Some good January rainfall welcomed  us to 2008. A gentle fall of 63mm over three days with relatively cool days to follow ensured that most of it soaked in. The park is refreshed but Cyanide Dam did not benefit at all and the vegetation growing in its dry bed is slowly becoming a forest of Red Gums. All other dams in the park have water in them. The Grey Box, Ironbark and White Box are slowly budding up and offering the promise of a good autumn.
Our first meeting for 2008 saw eleven members turn up on a rather humid morning. While 3 of us re-erected a nest box which had been cleaned of bees the rest went to Chiltern Valley No 2 Dam to tackle a variety of tasks.

One group tackled the Peppercorn regrowth with a variety of tools when Ranger Brian turned up with a lethal looking machete-type tool on a long handle. Brian finished off  the stubborn ones and cut into the bark and we promptly dispensed herbicide into the injured spots. A chainsaw is a remarkably efficient way of dealing with the bigger stuff and Brian ring-barked a couple of large Peppercorns at the gate for good measure. Some Boxthorn regrowth was also dealt with. While all this was going on the bird census group was compiling the bird list for the wetland and bush area. The stakes and guards from the 2006/7 were collected for future use. It is amazing what can be achieved in a short time with a keen group with varied skills.

Morning tea was more than welcome and the customary bun was quickly dispatched.

Members had a few questions for our ranger and some future tasks were discussed. Arrangements were made to acquire some tools to facilitate the modifications to the nest boxes in order to easily accommodate the camera and for the purchase of a first aid kit. The 2008 Community Grants are opening soon and it was decided that Friends would seek funding for some wetland interpretation boards to be placed at Valley No 1 and 2 Dams and Lake Anderson.

Next stop was our re-vegetation site at Tuan Campsite on Depot Road. Members weeded the enclosures and covered the new grass plots with wire netting to prevent the herbivores from  grazing the new grass excessively. The recent rains have ensured the survival of all the little plants which germinated from the natural mulch.

While this was happening Eileen and Brian went to dispose of several large Olive Trees in a remote part of the park. These trees were spotted by walkers and the sites marked and reported. The trees had also benefited from the summer rains and bore fruit which had to be removed. Park users are encouraged to look out for these feral trees and report their whereabouts
Lunch was enjoyed at Depot Dam but the expected birds were not present. After lunch a small group visited Chiltern Valley No 1 Dam. The water level of  the dam is now low enough to enable people to walk around the perimeter. Twenty-nine species of birds were recorded and notable among them were a single Dollarbird,
Click the photo to view it in the Nevil Lazarus birds photo album


as well as Great Cormorant and Yellow-billed Spoonbill. A large Goanna and an active Brown Snake were other sightings
***It was very unusual not to record Black-fronted Dotterels at Valley No 2 however at No 1 there were in excess of 20, feeding on the margins, in the short herbage and on the dry mud flat.The lists have been sent to the Victorian Database.

It seems the Koala at Honeyeater Picnic area is there to stay and please visitors. 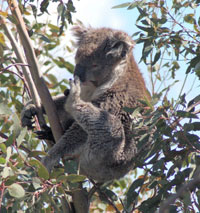 The Box Mistletoe is in full flower and is attracting the smaller honeyeaters such as Brown-headed and Yellow-tufted. Mistletoe birds are common at  present
Congratulations to Sean and Eleanor Dooley on the safe arrival of a precious baby daughter, Edie.
Little Red Flying Foxes: There has been an influx of these little animals in the Rutherglen area with quite a few coming to grief on barbed wire fences. Last report of  this species in the park was on a spotlight walk along Battery Hill Road about 10 years ago.

Rainfall for January  65.6mm over 4 days. Pretty good start for the year.<p>

This is attached to your newsletter and incorporated into the calendar of events on the website. Please keep it in a safe place and watch the newsletter for any changes.

EARTH HOUR MARCH 29TH
You may like to be part of the big  “switch off for an hour” on this day. Little things can make a difference.