The temperature for our October meeting was a mild 19 degrees and unfortunately the day was dry. We would cheerfully have worked in pouring rain but it was not to be despite being forecast.

The boundary filling on enclosure three at Tuan Campsite was the task for the morning. 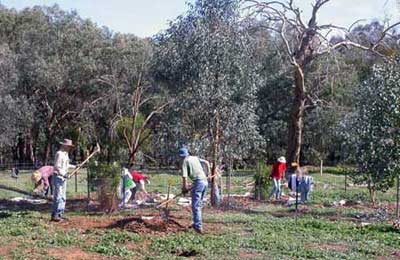 Willing hands had it finished in just over an hour and then tackled the mass of sticky Cleavers around the old dead tree. This should help reduce the seed bank of this pest.

The mulch laid in enclosures one and two is producing an array of native seedlings just as we had hoped for.

Peas, wattles, everlastings, bluebells, grevillea, persoonia and even a Yam Daisy were found. The Yam was about to flower which was quite amazing. Some rain would hopefully ensure their survival over the summer  months.

The eucalypts planted in September have been watered and are doing well.

In enclosure one the Woolly Ragwort, Senecio garlandii is coming into flower. Only two of the four plants survived the frosts as they were partly sheltered by the eucalypts. We now know where to plant the next lot.

So, to everyone who has had a hand in developing these enclosures thank you and please feel very satisfied with your efforts. Bun and a meeting closed the morning session.
The Donchi Hill nest box cluster was inspected and while all boxes were in use there were no occupants at home on this day. One box was quite full and as it was possibly a nursery box of a Tuan.

Lunch was scheduled to be at Honeyeater Picnic spot but it was overrun with some 20+cars and many more people, a big group having a picnic. We took ourselves up to Tower Hill and Hill Gum Track junction and enjoyed a peaceful, chatty lunch. During lunch our eyes turned to the skies as small flocks of mixed woodswallows passed over with quite a few White-backed Swallows amongst them. Several White-winged Trillers were also spotted. Re-invigorated we set off to explore a little gully off Tower Hill Road before walking to Ironbark Track.

This area is quite pretty at present, dominated by chocolate lilies, everlastings, speedwell and daphne heath it made a lovely show. The only orchids we found were some late Caladenia fuscata and some Caladenia carnea,
Little Pink Fingers. We searched in vain for some Beard Orchids which are common in this block and concluded the year was just too dry for them. 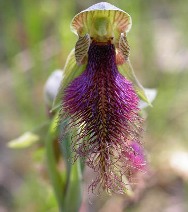 Among the peas doing their best to flower were Dilwynia phylicoides and D sericea. Dainty flowers of Twining Fringe-lily scrambled over twigs and low vegetation.

On a rather bare rocky spot we got down on our knees to examine the tiny ground flora. John helped out with the ID of the less obvious species. Pygmy Sunray, Triptilodiscus pygmaeus, Annual Bluebell, Wahlenbergia gracilenta,
the often overlooked pink flowered Hundreds and Thousands, Stylidium inundatum. Some introduced wild  Linaria or Pelisser’s Toad-flax was also growing among the rocks.

Birds were scarce. A lone Noisy Friarbird, very vocal Rufous Songlarks and Rufous Whistlers were the most obvious.

An Australian Raven held  our attention for quite some time as it worked over the leaves of the eucalypts. It seemed to be gleaning form the leaves but we were unable to make out what attracted it. It came quite close to us and was intent on its business

Following some discussion it was decided to hold the 2008 AGM in September to take advantage of the spring weather. We hope this will please members.

Quite a bit of bird activity. At Chiltern Valley No 1 Dam a White-breasted Woodswallow was busily removing nesting material from the Dusky Woodswallow nest and flying across the water to its nest hollow with it. Noisy confrontations with the Dusky Woodswallow did not deter the thief. Also seen at Valley 1 was a single Glossy Ibis, an unusual visitor. It delighted the visiting BOCA group as it sunned itself  on a log in full view with tortoises basking in the sun next to it. The dam margins are thick with rushes so who knows what may be lurking in their cover. The water level is quite good. No Latham’s Snipe have been spotted to date.

No 2 Dam water level is about 50% which is not pleasing. The Freckled Duck have not been seen again but about 12 Black-winged Stilts plus Black-fronted and Red-kneed Dotterels, Sacred Kingfishers, Pelicans and an array of ducks are present.

Bartley’s Block continues to draw visitors in search of the Painted Honeyeaters and other gems.

Cyanide Dam is now reduced to a single pool which does not bode well for summer. 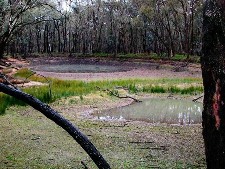 No eucalypt blossom has been observed. An immature Golden Whistler was an interesting sighting at Bartley’s Block.

NOVEMBER IS OUR VISIT TO OUYEN OVER CUP WEEKEND. EVERYONE IS WELCOME

We will be staying at the Ouyen Caravan Park. If you have booked accommodation remember to take your own linen!

Members wishing to meet in November please contact June Gotham on 03 57 261 619. A couple of useful activities would be clipping or pulling more Caper Spurge at Bartley’s while enjoying the birds and replacing some tree guards at Chiltern Valley No 2 which were blown off in the high winds.